In the late 1800s and early 1900s, Tobermory was a busy port for timber and fishing. The two deep sheltered harbours were a refuge during treacherous Lake Huron storms. There are more than 30 shipwrecks in the immediate area, ideal for exploration by divers.
I didn't do any diving, but we could see the outines of the two closest wrecks from the water.

Sweepstakes
The 36.3m Sweepstakes was a two masted centreboard schooner built in Burlington, Ontario, in 1867. In 1885 she ran aground near Cove Island Lighthouse. The crew were rescued by the lighthouse keeper. The following spring she was towed into Big Tub Harbour where her rigging, equipment and cargo of coal was salvaged before she sank. 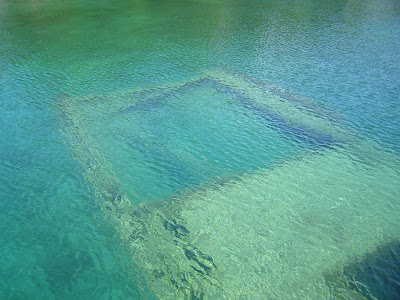 A small portion of the stern deck has collapsed, but most of the hull, deck, centreboard, windlass and some of the railing is still intact. 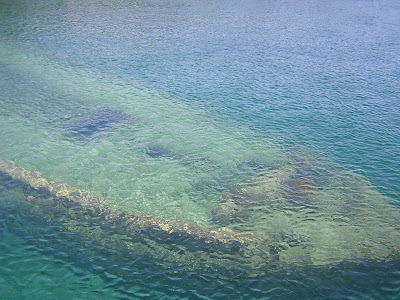 City of Grand Rapids
The 37.3m propeller steamer City of Grand Rapids was built at Grand Haven, Michigan, in 1879. She carried general cargo and passengers to ports on Lake Huron and Georgian Bay. In 1907 she caught fire while berthed in Little Tub Harbour. To prevent the fire from spreading, she was towed out of the harbour until the tow line burned and the ship floated free. 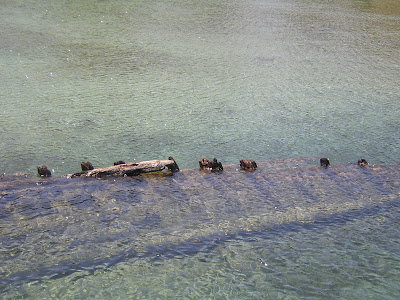 The burning hulk drifted into Big Tub Harbour where she ran aground, burnt to the waterline and sank. The port side, the steam engine and the fire box are still visible. 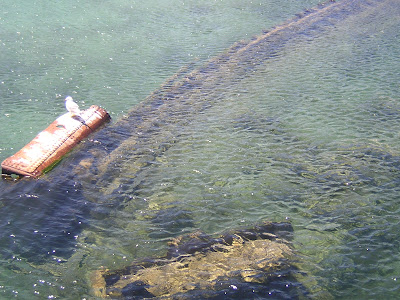 The remains are preserved in such good condition by the cold water of Georgian Bay.
Posted by Shammickite at 08:53