Back in the frozen past of last January, YoungerSon and The Bride moved into their "new" house, a solidly built 4 bedroom brick house of at least 25 years vintage.
The trees and bushes were bare of leaves and the gardens were covered in snow, with no indication of what plants might be lurking under the snowy blanket, waiting for spring.
But as the snow melted, it became apparent that the previous occupants liked to have flowers in their garden. The front beds erupted with red and white tulips and blue iris, and the wiegela shrubs soon produced sprays of pink and white blooms. 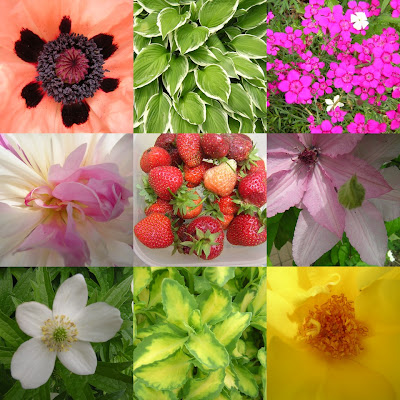 And now that summer is well on it's way, all sorts of colourful surprises have appeared. It's quite astonishing to The Bride, who says she knows nothing whatsoever about gardening. But all it needs is a bit of weeding here and there, and water from their new rain barrel. Perfect!
Posted by Shammickite at 12:46