The Wizard of OZ

Growing up in England, the best Christmas treat was going with my mum and dad to the Christmas Pantomime. We went on Lovering's Coaches to the Theatre Royal in Exeter.... it was a 50 mile trip on narrow twisting roads each way so we had to get up very early and got home very late.... Oh it was marvellous! Every year a different children's story... I remember Mother Goose, Dick Whittington and his Cat, Babes in the Wood, Cinderella and Aladdin.

And the panto always followed the same traditional format. There was always a man in a dress and horribly ugly makeup playing the Dame. The Principal Girl was played by a girl, and the Principal Boy was also played by a girl. And of course there was an evil witch/giant/sherriff/megalomaniac bad guy, take your pick, who was constantly trying to trick the good guys and get away with murder/kidnapping/dognapping/taking over the world, again, take your pick. But he never succeeded. The good guys always won.

Lots of music, singing, dancing, outrageous costumes, slightly off colour jokes to keep the mums and dads happy, and loads of loud audience participation along the lines of "Behind you... behind you" when the bad guy creeps up behind the good guys, and lots of "Boo! Hiss" and "Oh no you won't" "Oh yes I will" ad infinitum.

And every show ended up with a fabulous wedding when the handsome Prince marries the beautiful Princess, and the bad guy often puts his evil ways behind him and marries the ugly Dame.

So we took Callum and Isaac to the Toronto version of the Pantomime. This year it was The Wizard of OZ. Ross Petty has been staging these seasonal shows for quite a while.... last year we took Callum to see Beauty and the Beast.
But this Wizard of OZ wasn't anything like the movie... and nobody sang "Over the Rainbow". And the Yellow Brick Road led to "Funky Town"!

The Wicked Witch of the West (Ross Petty) was plotting to steal Dorothy's magic ruby slippers. He got ear-splitting BOOs every time he appeared on stage. Isaac and Callum were really into the BOOing. My ears are still hurting. 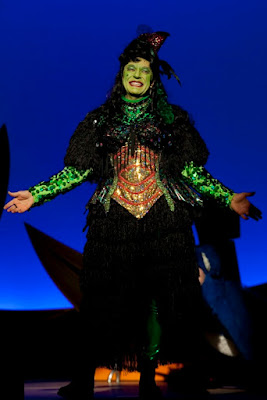 All pictures have been stolen borrowed from various internet reviews of the show. 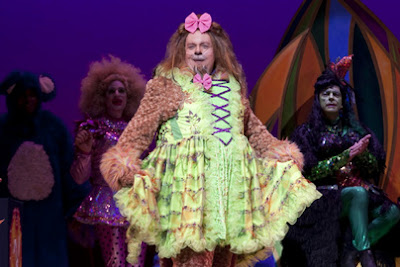 All the usual characters from the original story were there. The Scarecrow, the Cowardly Lion, the Tin Man (who mysteriously started out as a miner called Donny and ended up as Dorothy's love interest), Dorothy and her dog Toto, with the addition of Dorothy's lovely Auntie Plumbum von Botox (shown here wearing a delightful pink ensemble), the Wizard, and the Good Witch Splenda. 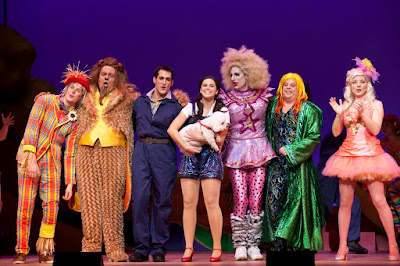 I wish I had taken pictures of Callum and Isaac. They absolutely loved it. They clapped, sang along, danced in their seats and BOOed the bad guys with all their might. And ate their way through large amounts of Smarties, yogurt raisins, cookies and cheesey crackers.

A trip to the Pantomime is definitely becoming a family Christmas Tradition.
Posted by Shammickite at 17:26