As you drive north on a quiet country road not far from here, hidden among the farms and barns and the fields full of wheat and corn, you come across a unique sight.
What? The Taj Mahal? I thought we were in Ontario!
Yes, we're still in Ontario... and yes, it looks like a smaller version of the Taj Mahal.

It's the Thomas Foster Memorial. 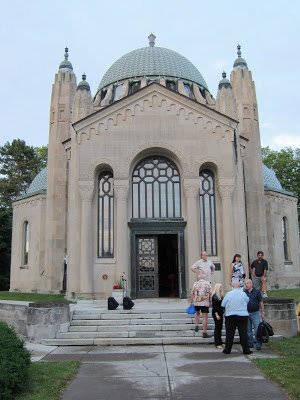 During his time as Mayor of Toronto, Foster held a competition to find the woman who could produce the most children in a 10 year time span. He wrote:

The money is to be distributed among mothers living in Toronto for at least one year prior to the start of each period, who have given birth “in lawful wedlock to the children during the 10-year period in question.” The mother giving birth to the largest number of children is to receive $1,250. Second prize is $800 and third prize is $450 in each of the four periods.

Included in the many bequests in Thomas Foster's will were funds


The Foster Memorial is open to the public during July and August, and every Friday evening there's a pay-what-you-can concert featuring local musicians and singers.... concerts known as Foster Fridays.


Sometime's it's R&B, or maybe jazz, or barbershop, or fiddle music ... even opera, and in a couple of weeks there will be a guitarist and a belly dancer on the program.
All donations go towards fixing the leaky 77 year old roof. I think Thomas Foster would be pleased.
Posted by Shammickite at 06:00