C is for Canadians

It was in April 1917 during the First World War that four Canadian military divisions defeated the enemy in a four day battle at Vimy Ridge in northern France. It was the first time that Canadian troops had fought together as one unit, and the victory has been described as 'The Birth of a Nation".

The Vimy Memorial was first dedicated in 1936 by King Edward VIII, and although it survived the Second World War undamaged, time and the elements erased many of the names of the 11,285 WW1 Canadian soldiers who died in France and whose remains were never found. Restoration of the monument was completed in 2006.


3598 Canadian students were given a project to "adopt" one of the 3598 Canadians who died at Vimy Ridge, and find out more about him, and represent that soldier at the rededication ceremony. Most of those soldiers were not much older than the students themselves when they lost their lives. Those students were at the Memorial to pay their respects today.


Respects were also paid to six Canadian soldiers who were tragically killed in a roadside bombing in Afghanistan today.

I visited Vimy Ridge with my sons in September 2005. The Memorial was completely covered with canvas over scaffolding as the massive restoration was still going on. Still pretty impressive from the back though. Both No1 and No2 have an interest in Canadian Military History, and were able to help me visualise the events of 90 years ago.

No1Son standing in the WW1 trenches at Vimy. 90 years ago those trenches were full of mud, blood, bodies, smoke, ammunition, and were a pretty horrible place for those brave men. 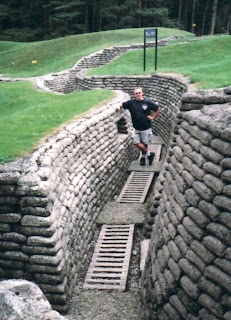 We knew that my mother's cousin John Turnbull Chandler emigrated to Canada from England to study agriculture, and joined the Canadian Machine Gun Corps at Welland, Ontario, in 1915. He was sent to England for training, and then to combat in France, where he was killed 3 July 1917, aged only 20. Perhaps he was part of the troops that fought at Vimy in April, we don't know. We visited his grave at Bully-Grenay, Pas de Calais, France, possibly the first family members to do so. A sombre moment indeed. 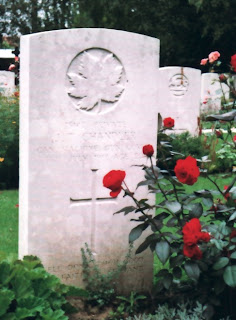 Posted by Shammickite at 12:34