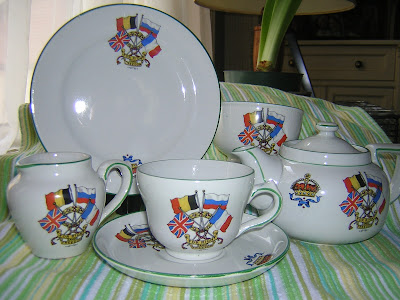 UPDATE:
Blogger Xtreme English pointed out the error of my ways in confusing the German flag with the flag of Belgium. Germany has horizontal bands, Belgium has vertical bands. Of course, I knew that!
She also says this is WWI commemorative china showing the flags of England, Belgium, Russia, and France--the allies against Germany in WWI before America entered the war. A lot of this china was made in about 1914. Thanks M.E.!
Posted by Shammickite at 08:31