Deacon Brodie's Pub is a popular watering hole on the Royal Mile in Edinburgh.
But who was Deacon Brodie?
This story is unashamedly borrowed from a BBC article about him. 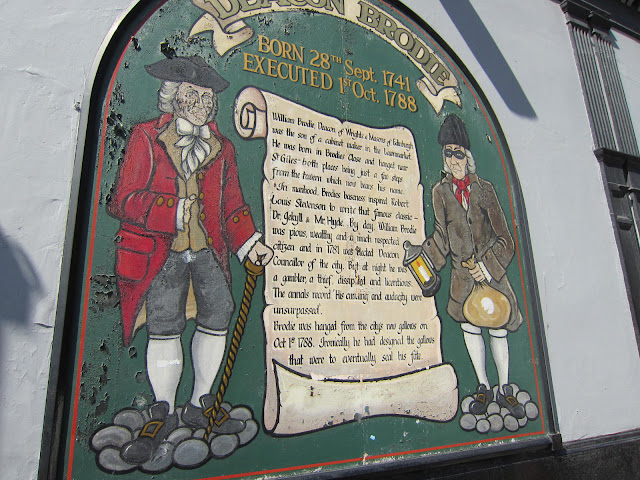 On 1 October 1788 William Brodie was hanged for theft in the Lawnmarket, Edinburgh, in front of a crowd that was the largest seen in living memory. He strode out to the gallows in fine clothes and a powdered wig. He was 47 when he was hanged and until his arrest had managed to maintain the illusion of being a respectable craftsman.

The prestigious title of deacon did not refer to religion, as many assume, but instead to his presidency of one of Edinburgh's trades guilds. His trade was a cabinet-maker and his position as deacon of the Incorporation of Wrights made him a member of the town council. 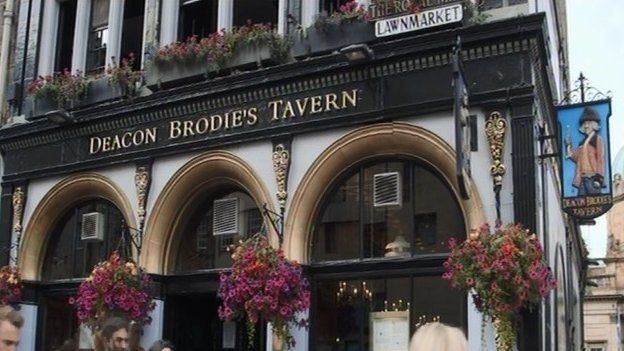 Both Brodie's grandfathers were renowned Edinburgh lawyers and his father was a successful businessman. Brodie himself was a fine craftsman specialising in domestic furniture such a cupboards and cabinets. He was also a talented locksmith. Through his work he had access to the houses of very rich people and was able to make impressions of keys which meant he could come back at night and rob them. His criminal career began in 1768 when he copied keys to a bank door and stole £800, enough to maintain a household for several years. But it was not until more than a decade later that Brodie's crime spree got going properly.

Brodie's father died of palsy in 1782 and left him £10,000 in cash alone, a fortune in those days, plus at least four houses and the business. Brodie had been a member of The Cape, the most exclusive club in Edinburgh, but over time his interests turned to a disreputable tavern in Fleshmarket Close, which was notorious for late-night drinking and gambling with cards and dice. He was also keen on betting on cock fighting. In addition to his gambling, he was also supporting two mistresses (who didn't know each other!) and five children. He ran up debts during the night but his daytime business was thriving

In the summer of 1786 Brodie met an Englishman, George Smith, a locksmith who ran a grocers shop in the Cowgate. The pair soon became extremely busy targeting businesses and private homes in the Old Town. Towards the end of 1786 Brodie and Smith robbed a goldsmith's and a tobacconist's. On Christmas Eve they made off with a major haul from Bruce Brothers, including watches, rings and lockets. Before long they got involved with two more criminals, John Brown, a thief on the run from a seven year sentence of transportation, and Andrew Ainslie, a shoemaker.

By the summer of 1787 they had ventured further afield to Leith where they stole tea, a valuable commodity at the time, from a grocer's shop. Shortly after this they stole the ceremonial mace from the University of Edinburgh.

The Excise Office in Edinburgh was in Chessel's Court at the bottom of the Royal Mile. For this job, possibly for the first time, the gang were armed with pistols and, also unusually for them, they broke in. They were disturbed and fled with just £16. It was a disaster and it led to the gang falling out

John Brown was tempted by the reward of £150 being offered for information about a previous robbery and went to the sheriff's clerk to name Ainslie and Smith as the culprits. When they were arrested Brodie feared the game was up and prepared to disappear. He took the stagecoach to London and then a ship to Holland. But the reward for Brodie's capture led to him being tracked down and discovered as he hid in a cupboard in an inn. He was returned to Edinburgh where he stood trial with Smith. His trial lasted just 21 hours. He was hanged in front of a crowd of 40,000.

According to a legend, Brodie wore a steel collar and silver tube in his throat to prevent the hanging from being fatal. It was said that he had bribed the hangman to ignore it and arranged for his body to be removed quickly in the hope that he could later be revived. If so, the plan failed. Brodie was buried in an unmarked grave at the Buccleuch Church in Chapel Street. The ground is now covered by a car park behind university lecture halls. However, rumours of his being seen in Paris circulated later and gave the story of his scheme to evade death further publicity.
Posted by Shammickite at 02:30