It was Party Central at OlderSon's house on Sunday. An assortment of uncles, aunts, cousins and grandparents, including one great-uncle and one great-aunt, battled their way through the snow flurries to help celebrate Callum's first birthday.

The Equestrienne created a splendid train cake.
The tracks were made of black liquorice and coffee stir stix.
The windows were Smarties.
The wheels were chocolate cookies.
And the cargo was marshmallows. 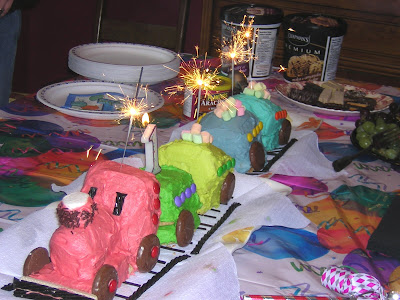 His cousins showed him how to blow the candle out and then it was time to EAT! Once the prezzies are all opened, you can have so much fun tearing up the wrapping paper. 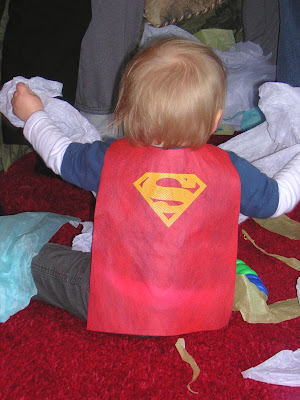 And of course, wearing a SuperMan cape gives you extra SuperBaby strength and energy to party till you drop. Which he did..... eventually! That boy is a true Party Animal!!! He's already looking forward to next year.
Posted by Shammickite at 13:39