The people of the town of Harbour Grace on Conception Bay have traditionally made their living from fishing and fish processing, but in the 1920s and '30s, the town airstrip was a favourite starting point for attempts to cross the Atlantic by air.
Amelia Earhart took flight from the airstrip at Harbour Grace on May 20, 1932, to become the first woman to fly solo across the Atlantic. 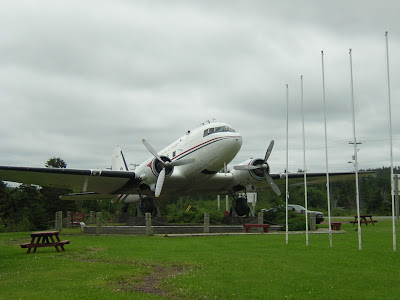 "The Spirit of Harbour Grace" is a restored 1943 Douglas DC-3 on display at the Riverhead since 1993, commemorating Harbour Grace's rich aviation history.
And in the bottom left corner, the "Kyle" is visible. 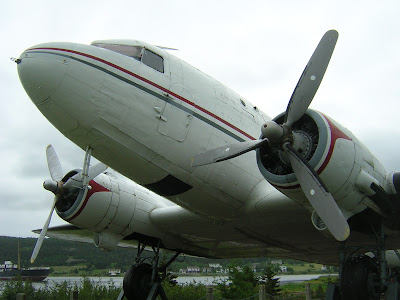 The SS "Kyle" was built in Newcastle, UK, in 1913, and was used as a ferry between Nova Scotia and Newfoundland, and later between Newfoundland and Labrador. By 1960, she became a sealing vessel, but after a losing encounter with an iceberg in 1967, SS "Kyle" returned to Harbour Grace for repairs.
That winter, she broke her moorings in a vicious storm, and instead of breaking up on the rocks, the winds drove her to the Riverhead, where she has remained ever since. Local legend says that it was not the "Kyle"'s destiny to go to an underwater grave.
Instead, the SS "Kyle" was guided to it's final resting place in Riverhead by the "seaman's ghost" - where the vessel's illustrious past would never be forgotten.
The history of SS "Kyle" is here. If you have time, read it, it's fascinating. A way of life that's gone forever. 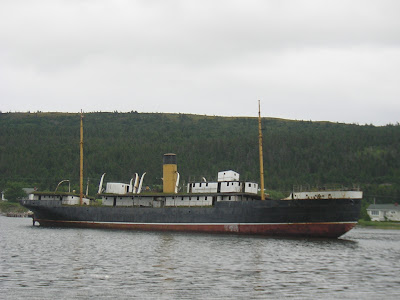 The Harbour Grace shipyard is full of fishing vessels under repair. Will this one ever challenge the high seas of the North Atlantic again? 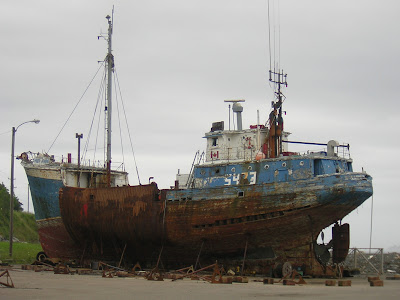 Just across the road from the shipyard, we ate fish'n'chips at the Harbour Grace Hotel. Fresh cod, right out of the ocean.
Mmmm, their fish'n'chips are some good, b'y!

More posts about our time in Newfoundland below.... just scroll down.
Posted by Shammickite at 07:32