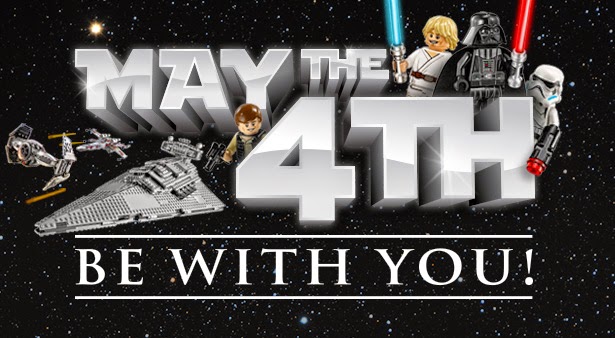 Can you believe the first Star Wars movie was released 25 May 1977!

I remember lining up with OlderSon and his friend outside a cinema on Bloor Street, Toronto, with a huge crowd of parents and kids, all so excited to see this brand new movie we had heard so much about. The boys were both about 6, and as often happens with 6 year olds, they suddenly needed to visit the loo, and consequently we lost our place in the line. Grrrr!

However we got in, and saw the film.... we had never seen anything like it before, and the boys became instant Star Wars fans.
The next movie from George Lucas in 1980 was The Empire Strikes Back. I can't remember where or when we saw it, but I recall seeing the third film released in 1983, The Return of the Jedi, when we were on holiday in Daytona Beach, Florida.

There have been a few more Star Wars movies since then, and I believe a new one is scheduled for release later this year.  In Toronto today there are some special Star Wars events planned for those who like to dress up. Star Wars fans will be appearing as Darth Vader and Jabba the Hut. Storm Troopers, Wookiies, Obi Wan Kenobis and Anakin Skywalkers will be popping up all over the place.