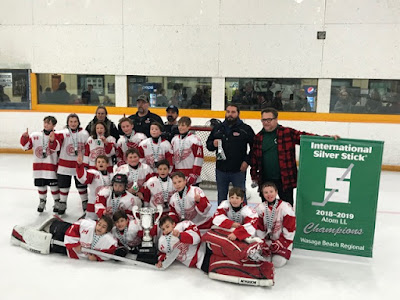 Last November my oldest grandson's Atom ice hockey team (ages 9 and 10 up to Dec 31) Schomberg Red Wings won their local tournament which was quite a welcome surprise as they really hadn't won many games all season.

However, this was a huge victory for them, and the team now qualified for entry into another tournament that was to be held in January 2019. 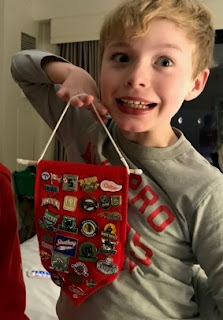 This was the International Silver Stick 2018-2019 Tournament Finals held in the Niagara Region. There were over 100 ice hockey teams competing in 13 different arena locations, from all over Canada and some teams from the US.
The team played 4 games, won 2 and lost 2, so they were pretty happy with the results! 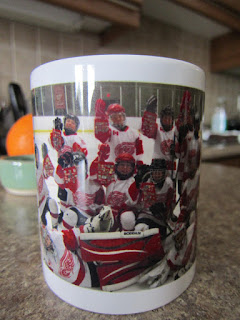 Before the hockey games kicked off, there was some social time scheduled, and  time was allotted for pin trading, so of course, if you swap team pins, you have to have somewhere to pin them.  I made each member of the team a pin banner to hang on the bedroom wall. They loved them and the banners were soon covered with souvenir pins.

And as an unexpected thank you from the team, I received this delightful coffee mug..... pictures of the team, all 17 of them, displaying their pin collections on the banners. What a great souvenir.... I'll be enjoying my morning coffee and cheering the team on at the same time! Go Red Wings!

Posted by Shammickite at 10:35