Only one more day until I can wave goodbye to 2008. So many good things to look back on.... performing in our local Variety Show in April, a trip to England in June, and a vacation in Florida in October. 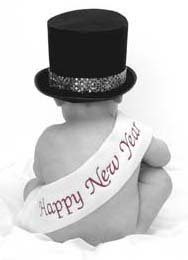 For me, the highlight of 2008 was the birth of my gorgeous grandson, Callum, in February.

I'm welcoming the New Year with open arms. Why? Lots of reasons.
May 2009 provide good health, happiness and fulfillment to all of you out there in Blogland!
Posted by Shammickite at 20:10