My mother had three sisters and two brothers.

This photo of the sisters must have been taken to celebrate a special occasion some time in the late 1920s or the early 1930s, the reason now forgotten. Look at the strings of pearls... so fashionable! And the dresses! They look gorgeous. Click on the picture to enlarge it. 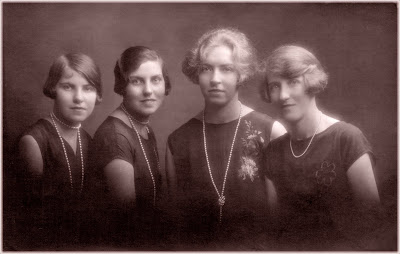 Eve lost her RAF husband during WW2, and emigrated to Australia with her daughter after the war. Norah and her husband and children joined Eve in Australia a few years later. Both Kath and Marie married and stayed in England with their families, Kath in Devon and Marie in Sussex. Brothers Alan and Eric also lived in England, in Northamptonshire and Lincolnshire. But even though the six brothers and sisters lived far apart geographically, they stayed close all their lives with regular letters, phone calls, and when possible, family visits.
Posted by Shammickite at 11:49