It rained all week. Hard. And you know what that does to a grassy field?
That's right.... MUD!
We went to Schomberg Fair to take in the Demolition Derby on Friday night. 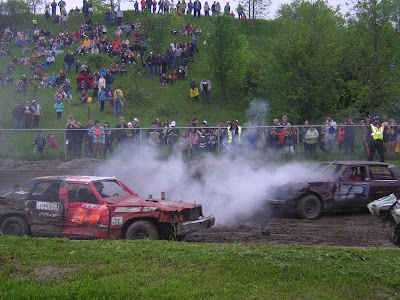 If you've never been to a Demolition Derby at a country fair, go prepared, expecially if it's been raining. It's loud, it's dirty and it's a mud bath. You need boots, something dry to sit on, plenty of food and drink, and earplugs. Did I say it's loud? The cars compete in a concrete lined jousting arena bunker, and the main aim is to disable all the other competitors by the drivers deliberately ramming their vehicles into one another. Forwards, backwards, sideways, anything goes. 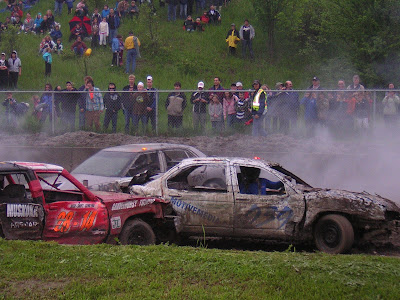 I personally think you have to be a little touched to compete in this sport. 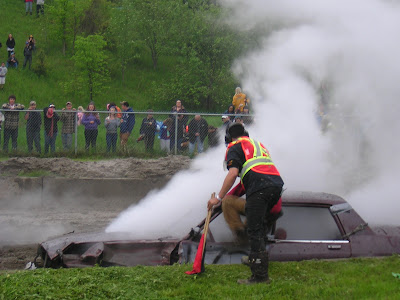 The cars look like they've been through the wars before they even enter the battleground. They are stripped of anything that might be dangerous.... nothing left inside the cars except the drivers seat and seatbelt, no glass, no windscreen, no upholstery, no trim, no nothing. Doors are welded shut so the driver has to hop in through the window. 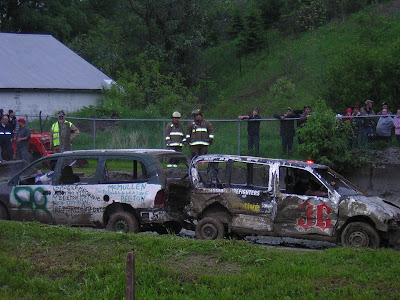 There's even a class for minivans!
The only major rule is that you don't ram the driver's door, and that's why Demolition Derby rules require the drivers door to be painted white with black numbers. 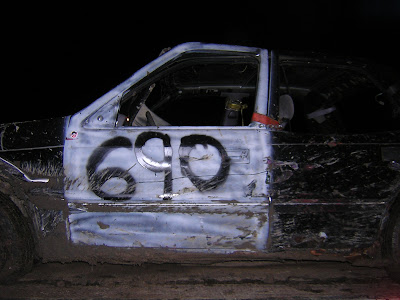 We met up with this car and driver after the race when we stopped at Timmy's for hot chocolate. He said he only built the car the previous night, stripping the interior and getting it ready for the race.... bought it from a little old lady who only drove it on Sundays! But he came second in his class, vanquishing 4 opponents.

And this is what happens to the tires after the race..... I don't fancy changing that flat by the side of the road.
Posted by Shammickite at 11:25