I spent my growing up years in England living within sight of the sea and walking on the beach every day, and now I live many miles from any coast. Even though Lake Ontario is huge, and looks like the sea with only water as far as you can see, it just doesn't excite me. Where's the salty smell? Where are the sea anemones, and the crabs and the rock pools?
So I try to make an annual pilgrimage to the ocean to renew my energy. Last year it was the rocky Atlantic shores of Newfoundland.
This year it's the same Atlantic Ocean, but a little further south (and a lot warmer!) at St. Augustine Beach in Florida. 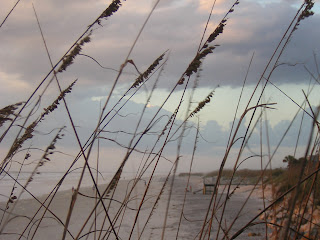 Callum had never seen anything as vast as the ocean in his 3-1/2 years on this planet, so when we walked onto the beach for the first time he just ran right into the water, chasing the sandpipers and soaking his shorts in the salty waves, much to his mum's disapproval. 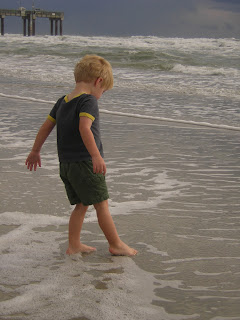 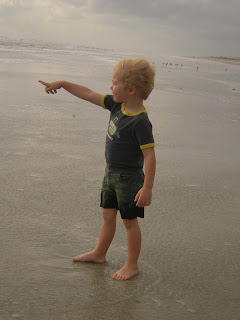 A storm threatened so we did some rather rainy sightseeing in the City of St Augustine in the morning, but the sun came out after the storm so we headed to the beach armed with towels, sunscreen, sunhats, snacks and a bucket and spade. 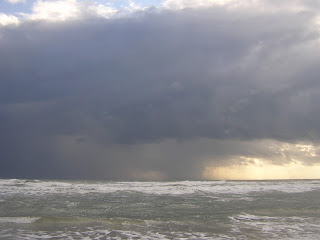 I bought Callum a plastic boat and we found a piece of string and secured the boat to his finger so he wouldn't lose it in the waves. 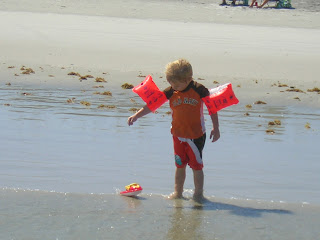 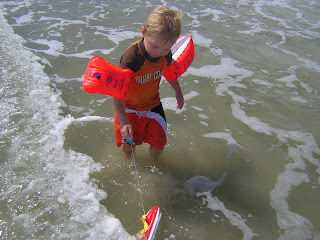 He was a happy boy. Only one day at the beach wasn't quite enough, but there's always next year!
Posted by Shammickite at 08:30