Three Chimneys Farm at Versailles, just outside Lexington, Kentucky, has been breeding champion racehorses since 1984, although the farm has existed for almost 40 years.
The first Stallion to stand here was Champion Slew O'Gold, then followed by his famous sire, Seattle Slew, the only undefeated Triple Crown winner in the history of racing. 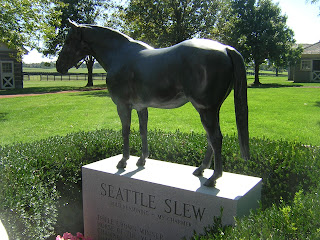 The barns are a luxury hotel for horses. Each stallion has his own groom, and is treated with personal hands-on attention all the time. The horses are exercised each morning and spend time outside in the fields, then are brought in to be washed, groomed and fed and generally pampered.... what a life! 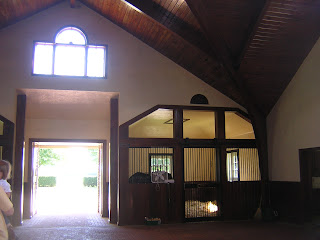 This is Point Given. He was the first horse to win four $1 million races in a row, and is in the Racehorse Hall of Fame. 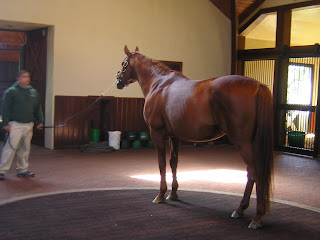 And this is Dynaformer. Dynaformer has sired more than 120 stakes winners, including the ill fated Barbaro. Do you remember Barbaro? Barbaro won the 2006 Kentucky Derby but shattered his leg 2 weeks later while running the Preakness. His owners went to great lengths to heal his life-threatening injury, but eventually decided that complications were too much and Barbaro was euthanized. 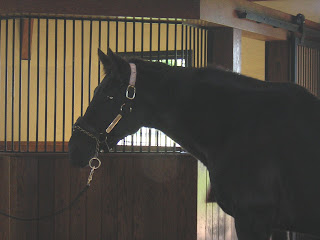 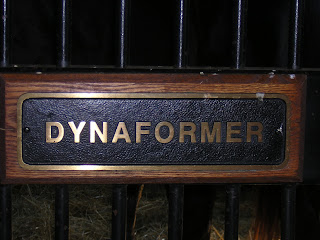 His trainer said that Dynaformer was the most difficult horse he ever trained, and when we visited his barn, we were told to stand well away from him as he can be very unpredictable and definitely has a mean streak. His current stud fee is $150,000.00 per live foal.
Update: the great horse Dynaformer passed away April 29, 2012 at Three Chimneys Farm in Kentucky following suffering a cardiac event 10 days earlier.
Posted by Shammickite at 08:43