It was quite an adventure, driving from Phoenix, Arizona, USA, to Toronto, Ontario, Canada. Approximately 2,220 miles along America's highways, or if you're Canadian, it was 3,600km. We packed everything but the kitchen sink into the car, including V's little dog..... you can see part of the dog carrier in the bottom right corner. 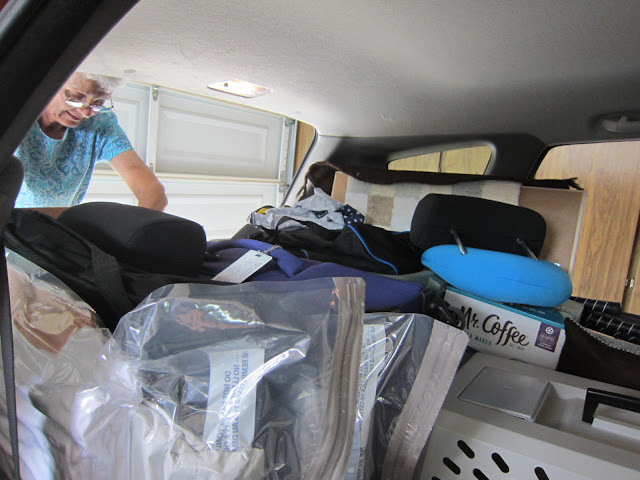 We were on the road by 7:00am aiming for a good first travel day. The sky was blue and the sun was shining on the previous day but clouds started rolling in and it had rained a bit that night. But we were glad of the cooler weather for travelling. 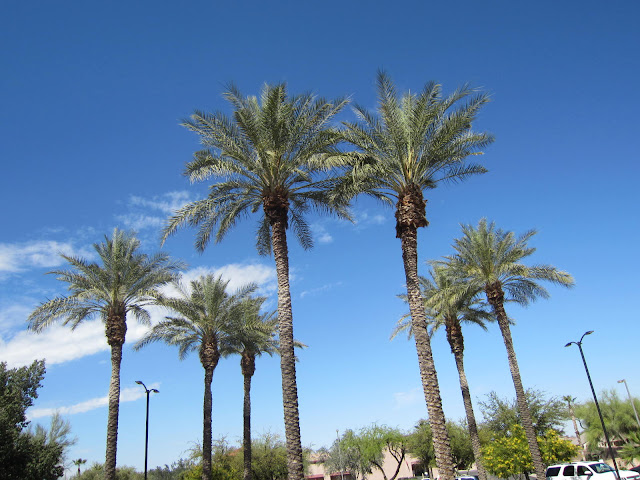 We drove north from Phoenix towards Flagstaff, partly tracing our route we had taken to Jerome a few days earlier. Then V said "Is that snow on those cars coming towards us?" Oh, I hope not....  but as we climbed higher and higher....... 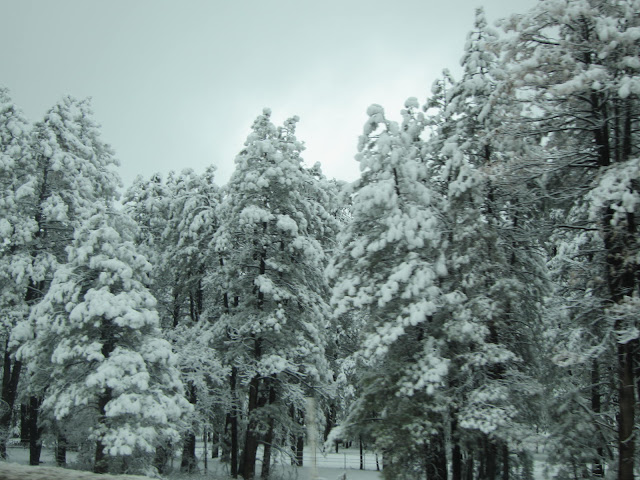 I couldn't believe my eyes! And this was really heavy snow. Luckily the road surfaces were clear as we didn't have snow tires on the car..... well, you wouldn't think you would need them in Arizona! We drove from 32C in Phoenix to 0C as we climbed to 7000 feet above sea level at Flagstaff. 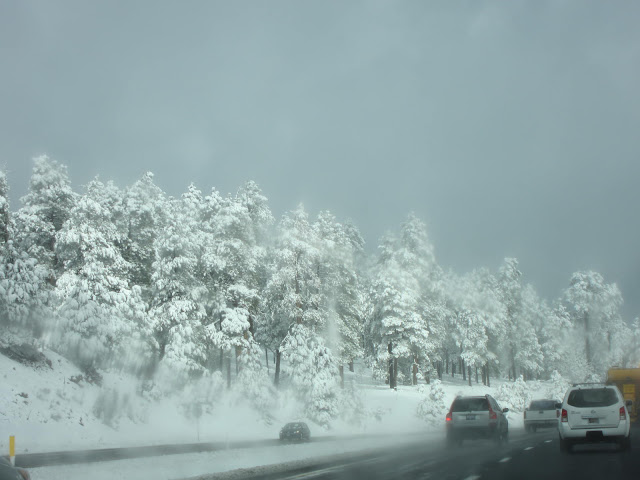 Lots of traffic on the road. We encountered some snowplows and some salters, which were a welcome sight, especially when it started raining freezing raindrops. And I was still wearing my summer T-shirt and capris! Thank goodness for a warm car. 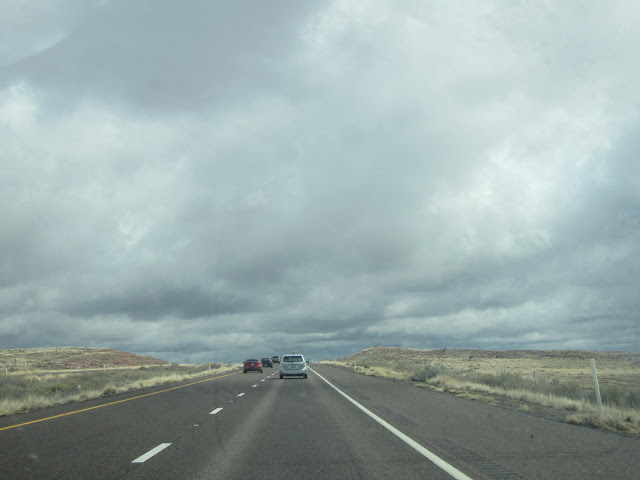 As we headed west from Flagstaff towards the New Mexico border, the temperature rose a bit and the freezing rain became regular wet rain.... but bringing with it very high winds. We were battling with the steering to keep on the road in some of the really exposed areas. 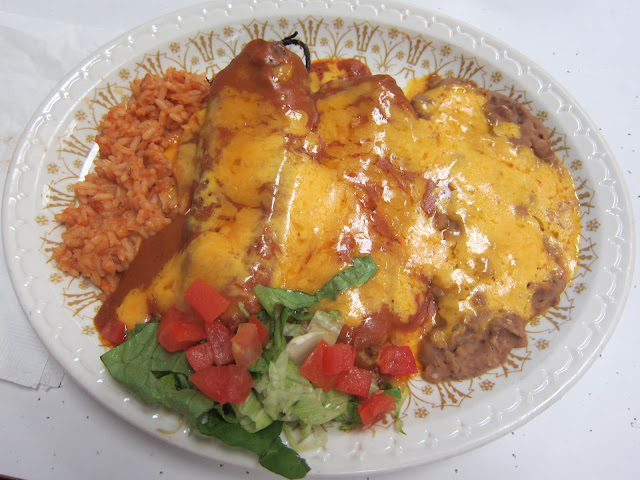 We stayed the first night in Santa Rosa, New Mexico, having travelled 850km (528 miles) and of course, next to the hotel there was a Mexican restaurant. Who can resist tacos, burritos, fajitas, refried beans, and my favourite, poblano rellenos. 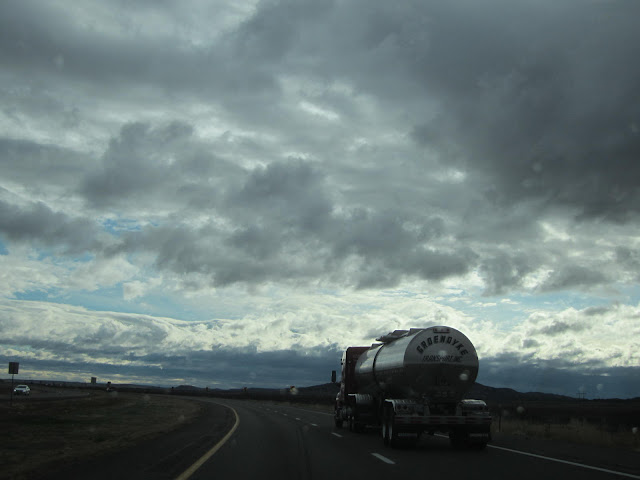 The road next day led us over the New Mexico border into Texas, where the wind was still blowing a gale force but at least the rain had stopped. We made quite a few rest stops, mainly for the little dog to get out and have a run round and let Nature take it's course. Well, we needed to stop too. 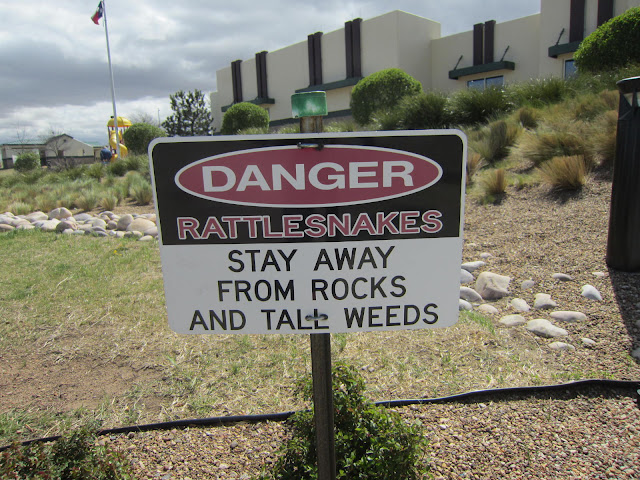 I wasn't going to investigate any further than this notice outside the nicest highway travel rest stop in Amarillo, Texas. We went inside and met the janitor staff who keep the place clean and tidy, and they were so proud of their facilities. The building was built 13 years ago and .... well.... what can I say, for a public washroom the whole place was spotless! 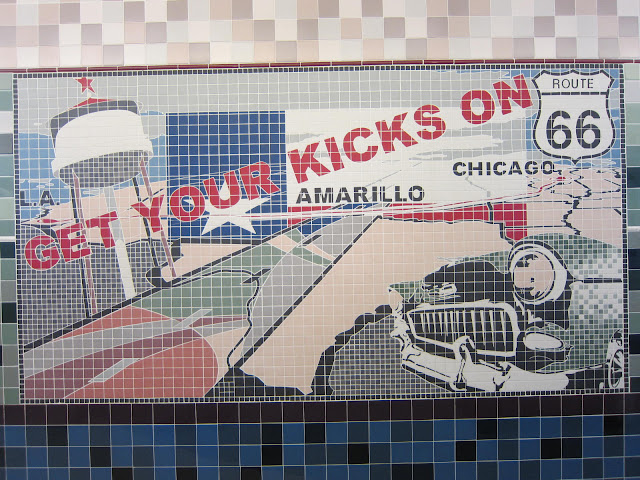 And this was the tile mosaic in the ladies washroom, commemorating Route 66. In the words of the song: "It winds from Chicago to LA, more than two thousand miles all the way." We were following Route 66 much of the way across the country as far as St Louis. The strong winds continued across Oklahoma, and I was amazed at the thousands of wind turbines installed in the western part of the state, making the most of those high winds. Too bad I didn't take a photo of them. Our only heavy traffic was going through Oklahoma City. 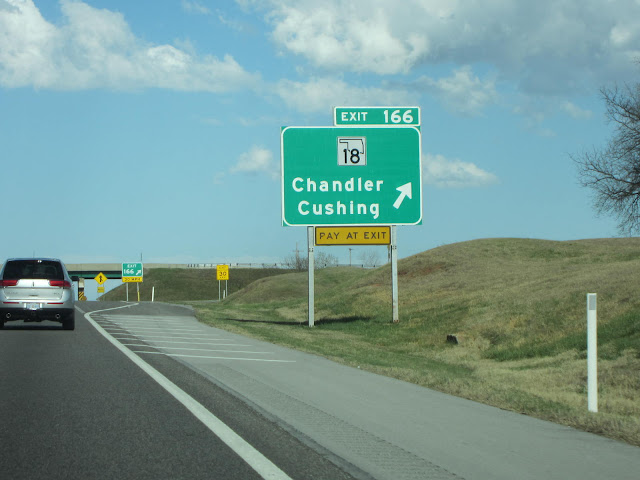 This picture is included to amuse my Chandler relatives. We spent the second night in Joplin, Missouri, having got just over 1000km (645 miles) behind us that day. Joplin is mentioned in Route 66 lyrics.... and I have since found out it's where all those tornadoes head. We had thunder, lightning and heavy rain, but no tornadoes, thank goodness.
Our third night was in Anderson, just to the west of Indianapolis, Indiana.... this was 920km (572 miles) from Joplin. It was fascinating to see the changes in the surroundings as we travelled north. 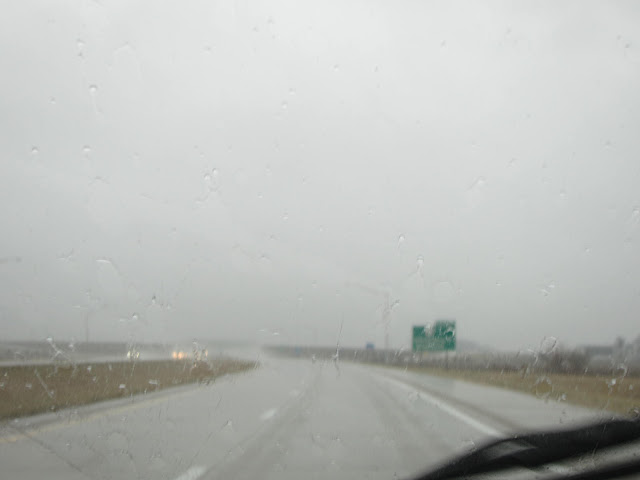 And the rain continued through Illinois, Indiana, and then over the border to Michigan.... now we were getting close to home. When we got to Detroit, we followed the instructions for "Bridge to Canada" and there it is, the Ambassador Bridge from Detroit to Windsor, Ontario. 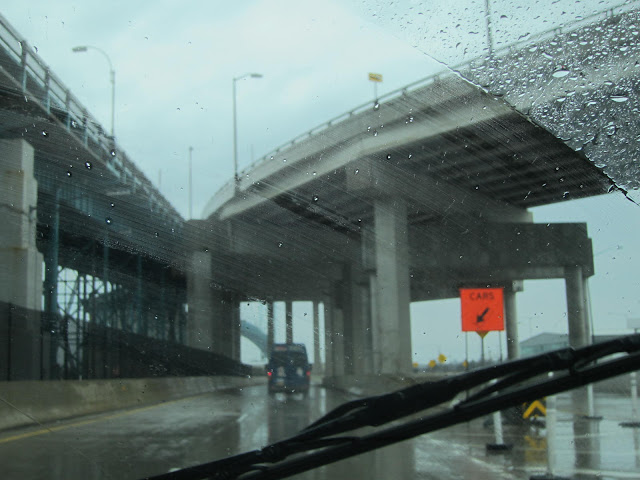 We sort of expected trouble at the border crossing, as we had such a full car, and also we were travelling with a dog, but the Border Guard just swiped the passports, asked a couple of routine questions about what were were bringing in duty free (a couple of bottles of wine each) and how long we had been in the USA (V had been there since October 2016, and me just for 10 days), and waved us through. Phew! 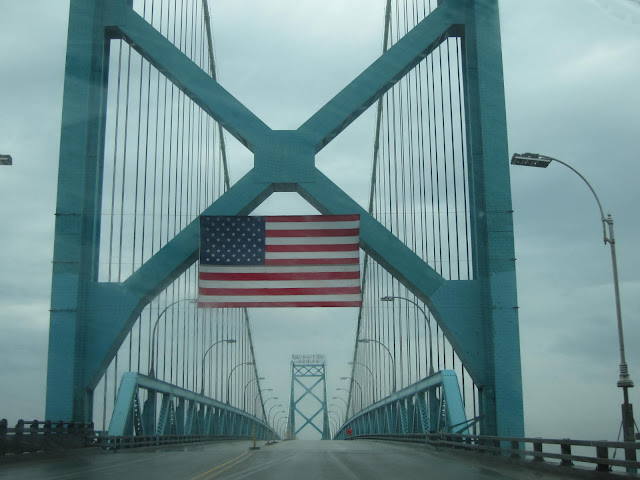 And then were were back home in Canada..... Hooray!.... and as soon as we crossed the border the sun came out!
We were home by that afternoon..... so 3 nights and 4 days on the road travelling 3,600km, and yes, we are still friends in spite of being trapped in a car with noone else to talk to (except the little dog) all that time. Yes, I'd do it again, it was fun. But I'd like to stop and do some exploring next time. And I'd plan for better weather.
Posted by Shammickite at 12:23