One of the most hotly contested rivalries at Markham Fair is the 'biggest pumpkin' competition. This year the heaviest pumpkin was won with a giant weighing 193 pounds. That's it on the left in the photo, the green one with the blue ribbon
The heaviest squash, the huge yellowish white one with the red First Prize ribbon, weighed in at a whopping 637 pounds. That's 289 kg for those who prefer metric. 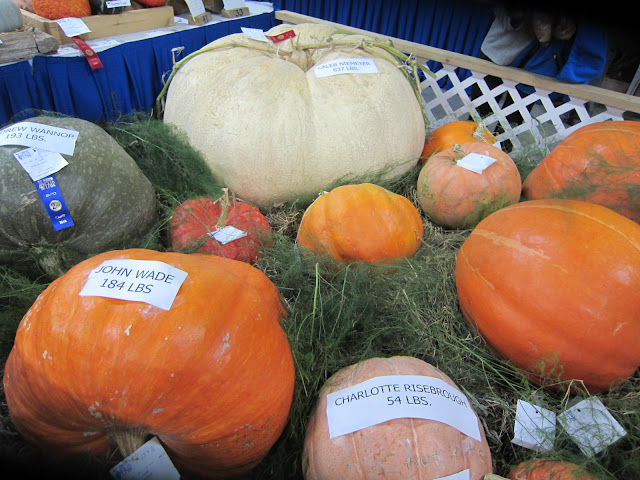 The grower, Carl Niemeyer, said he bought the pumpkin seeds on line from the provincial winner of the largest pumpkin in Manitoba.
Growing the pumpkin was easy, but transporting it to the Fair presented a challenge. Twelve people lifted it onto a skid before loading it onto his pickup truck for delivery to the Fair.
The secret to growing a giant pumpkin? He put lots of chicken manure down in the spring, and as the vine grew, he pruned off all the smaller pumpkins so the granddaddy of them all could receive all the nutrition.
If you're interested, the giant pumpkin is for sale at a local farmer's market for $200.00.... that's Canadian dollars of course.  Pumpkin pie, anyone? 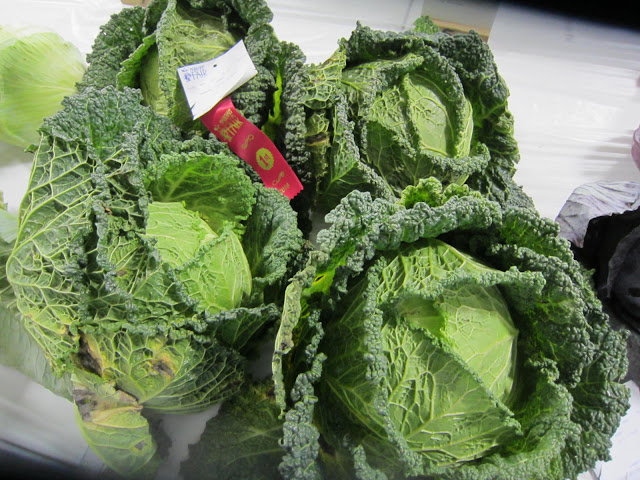 Lots more giant vegetables on show too. These are Savoy cabbage. My favourite. I wish I had taken a pic of the largest potato weighing over 3 pounds. You could make a lot of french fries with that!

I'm not doing very well with my resolution to blog every day in October, and we're only 6 days into the month. Oooops.
Posted by Shammickite at 11:46