William is a long case clock, otherwise known as a "Grandfather Clock", made by William Rippon of South Shields, County Durham, England in the middle of the 19th century, approximately 1850. He's lived on the second floor of our house for almost 15 years (the clock, not Mr Rippon).

The clock has an 8 day mechanism, and a hand painted dial with a typical country scene in the arch. There are date and seconds dials, but the date dial has never been connected.... perhaps he was a no-frills model. He has brass hands, and a wide polished mahogany case. 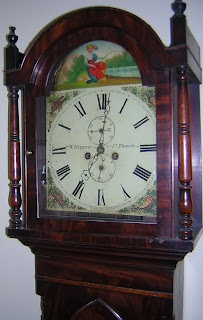 William Rippon was born at Iveston, Lanchester, County Durham, England, on 18 April 1809, and was baptised 14 August 1809. He was the youngest child of John Rippon and Hannah Short, who were married in 1793.

William and his wife Mary had no children, and Mary was left a widow on William's death in 1865. By 1871, Mary was described as a "Property owner", but ten years later she had fallen on hard times and was described as a "mangle woman". Mary Rippon died aged 88 in South Shields in 1897.
I wonder how many more examples of William Rippon's clocks are still counting the minutes and chiming the hours. I'm very fond of dear William, and I love hearing his musical tones every hour on the hour. He groans and wheezes a bit at times, but so would you if you were over 150 years old.
Posted by Shammickite at 19:19