My sons love football.
Now, to me, football means the players run up and down the field kicking the ball with their feet.
FOOT + BALL = Football. Logical.
Not this kind of football. Mostly the players pick the ball up and run, then fall down, and jump on each other until someone in a striped shirt tells them to stop. And they wear body armour and helmets, the wussies!
Even though both sons have explained the rules to me a kazillion times I'll never get it. I kinda like the tight pants though.
In spite of my complete ignorance of the game, we had a great time at No1Son's house watching the Colts beat the Bears. All the girls were cheering for the Colts because we like teams with horsey names, and let's face it, even though they look cuddly, Bears can be mean.

No1Son had prepared Super Bowl quizzes, score sheets, and devised a football game that included gambling (with quarters) and prizes.

I won this attractive fridge magnet for correctly predicting the 3rd quarter score. 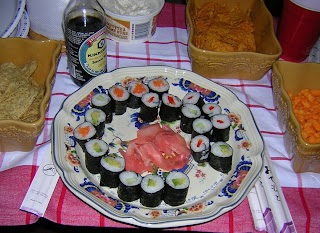 Posted by Shammickite at 21:25