It was truly spectacular!

NASA Mission STS-126 "Endeavour" carrying seven astronauts lifted off from Cape Canaveral on Friday evening right on time at 7:55pm. It's heading to the International Space Station to make a few improvements to make life easier for the occupants.

And we were there to witness it! WOW! 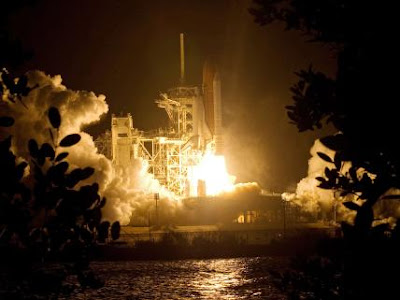 The night before the launch, The Space Cadet spent about an hour looking at Google Earth, planning the best vantage point to see the launch. He decided Hwy 1 in Titusville, so we headed south on Friday afternoon. People and cars were everywhere, tremendous excitement in the air. We asked a group of tough looking bikers the best place and they said "Right here... just park and we'll show you where to go".

They were right, it was a bit of vacant grassland at the back of Wendy's Burgers, about 200 people had already assembled with chairs, radios, TVs, cameras, telescopes, children, etc., with a clear view across the Inland Waterway towards the launch gantry, which was lit up like a Christmas tree. You couldn't miss it.

We scrambled over a rusty fence and joined a group (including the bikers) sitting along the river bank. We had over an hour to wait, but time passed quickly, with so many people to talk to. After all, everyone was there for the same reason.

And as we waited, a gorgeous full moon rose into the clear sky.

Finally, the countdown... five... four... three... through my binoculars I could see smoke or steam billowing up... two... one... a huge burst of orange flame lit up the sky and the rocket started lifting into the night. I could hardly breathe. What an incredible sight. And a few seconds later the sound of the rocket reached us across the water... a huge rumbling boom, such power!

Cheers, applause, lots of whooping and hollering, people were celebrating a successful launch. 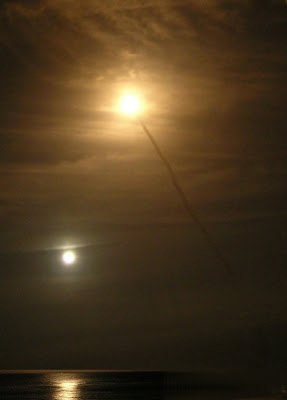 I followed the rocket with the binoculars as far as I could. I could even see the red hot booster rockets fall towards the sea. Incredible to think that seven human beings were sitting on top of that fiery rocket, trusting their lives to technology (and perhaps keeping their fingers crossed, knocking on wood, etc.). 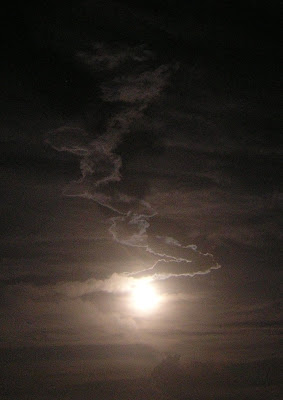 Space shuttle vapour trail lit up by a beautiful full moon.
What a sight.
First pic borrowed from NASA web site, other pics taken by The Space Cadet.
Posted by Shammickite at 20:12