Soon after we first arrived at Ormond Beach, I noticed this turtle nest had been marked and tagged.
The turtle nesting season in Volusia County ends on October 31.

The total count for 2008 was 649 nests on this part of the Florida sea coast, mostly of Loggerhead turtles.

This nest was laid on August 23 2008, and was numbered N201 and dated by the Beach Turtle Patrol. Incubation takes approximately 55 days, so the baby turtles should have hatched a few days before we arrived. 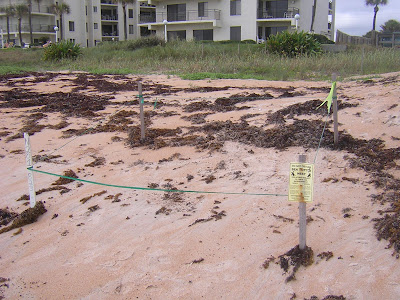 The female turtle lays 85 - 110 eggs in the sandy nest, which she digs with her hind flippers. After she covers her eggs, she returns to the sea, leaving her babies to take care of themselves and find their own way to the ocean. 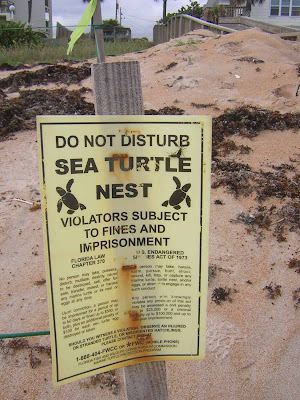 I walked past the nest site most mornings but didn't see any sign of hatching. No baby turtle footprints to be seen. Turtle Patrol people wait at least 70 days before investigating if there has been a successful hatch.

A couple of days ago Turtle Patrol dug the nest site. 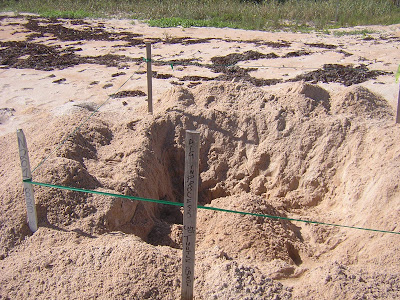 They found 108 unhatched eggs, some with partially developed embryos. Turtle Patrol told me that the nest probably got overwashed too many times by the high tides.
The odds are stacked against baby turtles surviving the hazardous journey to adulthood. First they have to make their way from the nest to the sea, many of them are disoriented by beach lighting and head in the wrong direction.
Then they have to avoid being swept onto beaches by storms or high tides, or becoming dinner for a larger hungry sea creature.
Only about .01% of the hatchlings survive to return to the same beach as adults to lay their eggs.
Better luck next time, Mama Turtle.
Posted by Shammickite at 07:50