The Irish Loop is the only road that goes from St John's all the way round the Avalon Peninsula and back to St John's, and it's a full days drive. It took us through countless fishing outports built on scenic bays... small communities with delightful names like Tors Cove, Cape Broyle, Ferryland, Aquaforte, Fermeuse, Renews, Cappahayden and Trepassey.
The interior of the Avalon is bog, scrub, bushes and swamp.... the home of moose, beaver and fox, and also of the most southerly herd of woodland caribou in the world.
The first time I drove the Irish Loop about 14 years ago, there were caribou everywhere, grazing on the edges of the road, walking down the middle of the road, even laying down on the road, in fact so many that we couldn't get past them.

(Caribou picture borrowed from the internet.)

But this time, as we got closer to the area where the caribou are normally seen, this was our view... 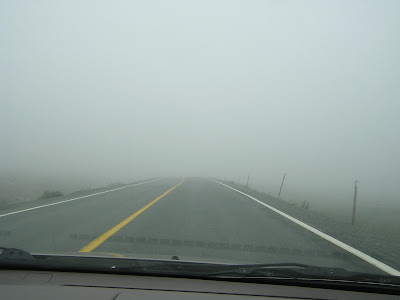 There could have been a couple of dozen caribou lurking 15 feet either side of the road and we would have missed them. Note to self: never drive the Irish Loop when the wind is from the southwest.... it's ALWAYS foggy.

A day or two later I visited The Rooms, the Provincial Archives, Art Gallery and Museum of Newfoundland and Labrador. 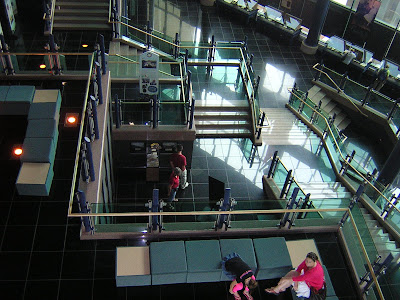 There are three art galleries, each showcasing Newfoundland artists, and five museum displays, all different, one of them being a wonderful exhibition of boats, canoes, kayaks, and how these small but important vessels were made and used, and how they are still a part of the lives of Newfoundlanders and Labradorians.

But I was still hunting the caribou.... 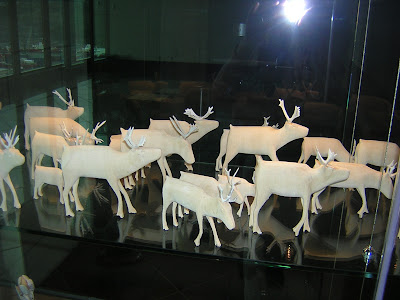 ... and here they are. These are the George River Herd carved in pine and bone by Chesley Flowers of Hopedale, Labrador, on display at The Rooms. I believe he is the father of Ross Flowers who carved my two caribou. (Update: Brian of Nain Bay says Chesley was Ross Flowers' uncle.) I posted about them here.

“I remember I cut me twenty-two sticks, 10 feet long, green stuff. I hauled it so far. The dogs were tired. Not me. And there was nothing faster than dogs and snowshoes. First, I cut the large caribou green. Then I let them dry for two or three days. There’s lots of cutting on the big ones. They’re hard to do. I use a small axe to cut off all the big stuff. Then I blesses my saw. That’s all I use.”
Chesley Flowers, Catalogue for “First: Aboriginal Artists of Newfoundland and Labrador” 1996.

For more pictures of Newfoundland, scroll down to the previous 4 or 5 posts. And there's a couple more to come, so stay tuned!

Posted by Shammickite at 15:16