It's a long trudge to the top of the hill, especially on a hot day, but every time I go to St John's I just have to do it. Signal Hill dominates the entrance to the harbour, and there's a fantastic view over the city of St John's in one direction and the Atlantic Ocean in the other.

At the top, the sandstone Cabot Tower was built in 1897 to commemorate the 400th anniversary of John Cabot's discovery of Newfoundland, and Queen Victoria's Diamond Jubilee. Inside is a small museum detailing the first transatlantic wireless signal, the letter "S" in Morse Code sent from Cornwall, England, and received here by Guglielmo Marconi in 1901. 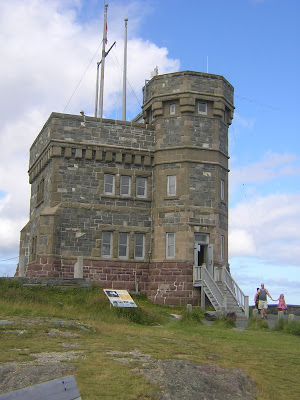 A winding narrow staircase took me to the very top, where there's a stunning view over the harbour, but my visit was cut short by swarms of flying ants, so I didn't stay up there long. 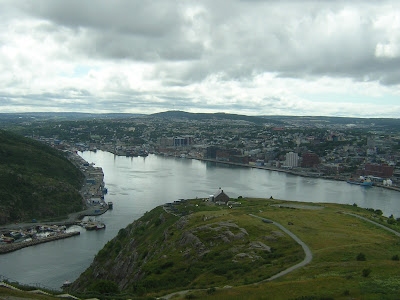 The small stone building in the foreground is the 18th century Queens Battery, built for defence of the harbour. The French-English struggle for Newfoundland ended here in 1762 with the last shot fired on the hill. 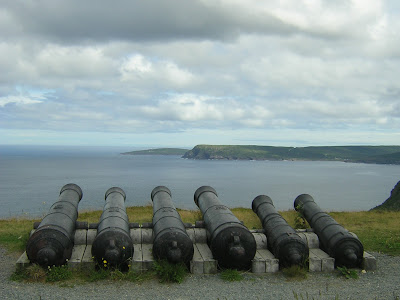 The French may have been vanquished back in1762, but the cannons remain.... just in case! 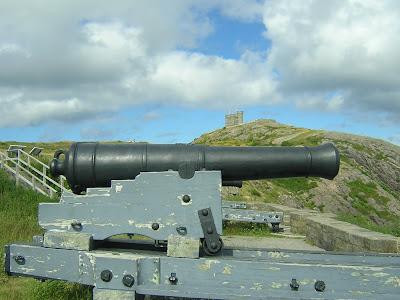 There have been harbour defences for St. John's here from the 18th century to the Second World War. As early as 1673, a heavy chain was stretched from across the Narrows from Pancake Rock to Chain Rock to protect the harbour from incoming enemy vessels. During WWII, an anti-submarine boom was attached to prevent the entry of German U-boats.

Across the entrance to St John's Harbour is Fort Amherst. The WWII gun emplacements down near the water are still there, but no public access any more. ('Elf'n'safety rules, no doubt.) On previous visits we have been able to walk through the bunkers and actually climb on the rusty guns. 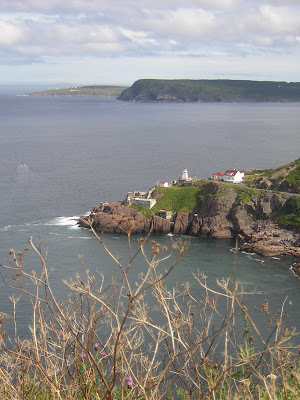 The Fort Amherst lighthouse was built in 1952, replacing former structures built in 1813 and 1852. The lighthouse keepers house has been converted to a delightful tearoom with a spectacular view of The Narrows.

And in the far distance is the lighthouse at Cape Spear, the most easterly tip of land in North America. Start swimming.... next stop.... Europe.

For more pics of Newfoundland, see my three previous posts. As always, click on any pictures to enlarge.

Posted by Shammickite at 08:16