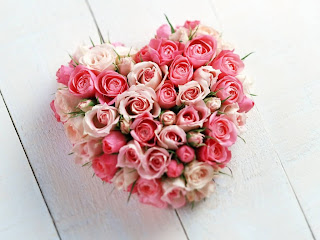 Are you wearing RED today?
It's Saint Valentine's Day!
But who was Valentine?
He was a young priest who disobeyed Emperor Claudius in 270 AD by conducting illegitimate wedding ceremonies in Rome. The Emperor  claimed that married men made poor soldiers and consequently decreed that all marriages of young people would be outlawed. Bishop Valentine continued to conduct marriages in secret between young people, sometimes as young as twelve, in the name of love.
He was thrown in prison, but became friends with the jailer's daughter, and passed her a note which read "from your Valentine" before he was beheaded.
All over the world people are buying flowers, chocolates, and gifts for their loved ones, and sending cards that say "from your Valentine". Have a happy day!

Posted by Shammickite at 08:10