Back to my summer trip to Europe! We only had one afternoon to explore the ancient city of Český Krumlov which is a UNESCO World Heritage site in the Czech Republic. Luck was on our side as when we arrived, it was the day of the annual Five Petalled Rose Festival. What better day to see it!

The old medieval town was alive with craftsmen, artists, musicians, jugglers, and local people dressed in costumes from the Middle Ages. Various activities such as jousting, fencing, historical dance performances, and folk theatre take place at the castle and in the town square. 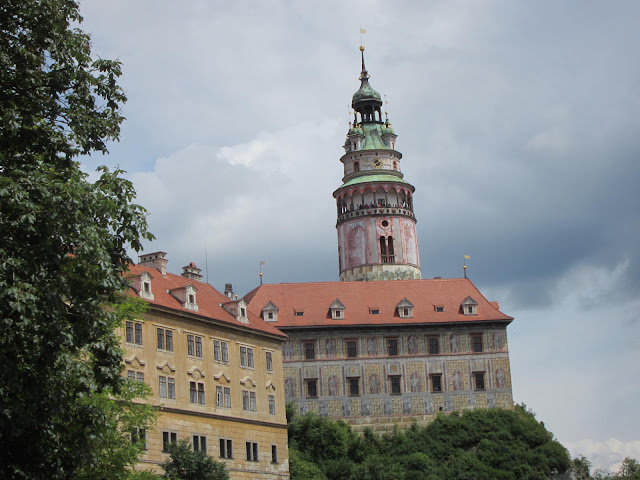 Construction of the town and castle began in the late 13th century at a ford in the Vltava River. Most of the architecture of the old town and castle dates from the 14th through 17th centuries. 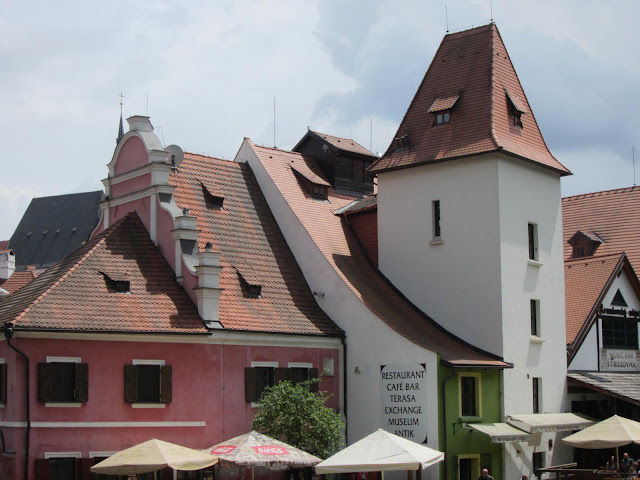 Between the wars Český Krumlov was part of Czechoslovakia. During the Communist era, the old town fell into disrepair, but since 1989, it has been restored and is a major tourist destination now. 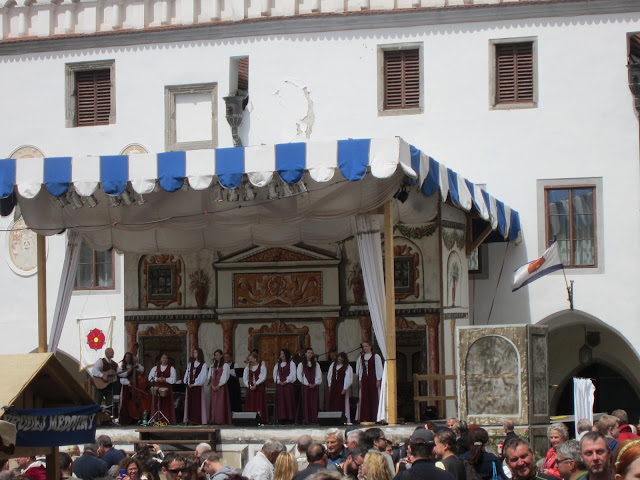 A choir were singing folk songs on a stage set up in Svornosti Square. The townspeople were all joining in heartily. There on the wall is the Five Petalled Rose, the symbol of the Rosenberg (Rožmberk) family who ruled the town for 300 years from 1302 to 1602. 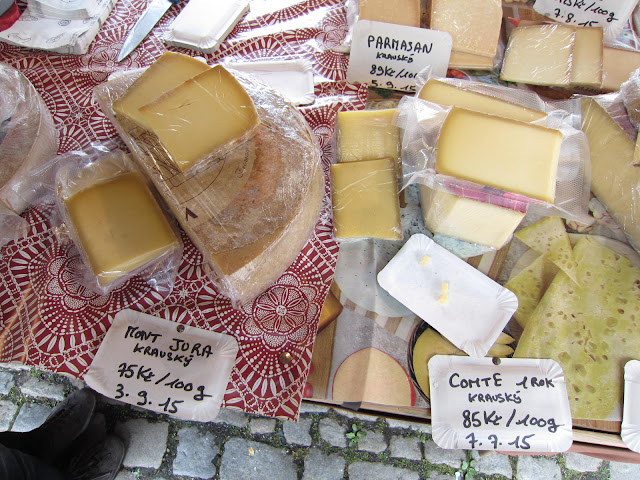 It was lunchtime and our tummies were rumbling, so rather than sit at a restaurant, we decided to eat on our feet.... buying cheese and bread from the market stalls that had been set up around the square. I have no idea what kind of cheese I bought, I just pointed and it was delicious! 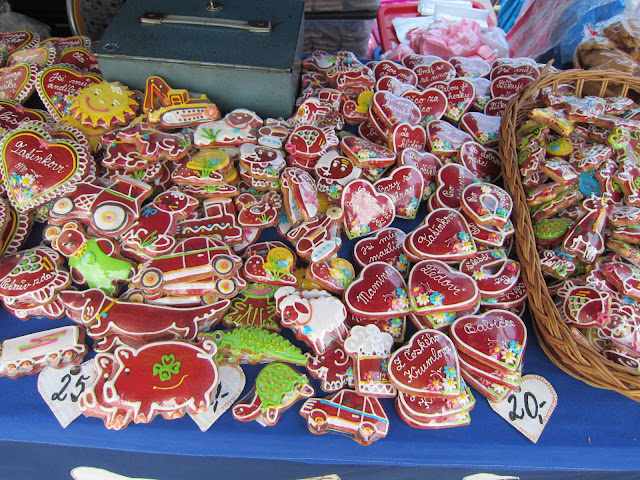 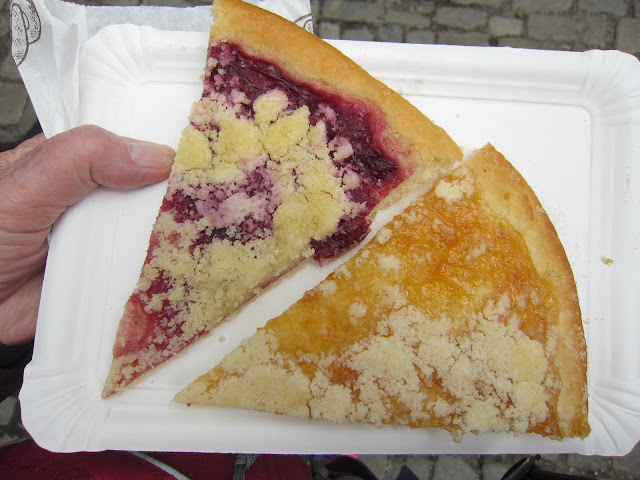 So we shared these fruit pie slices... and they were so good that we went back for a second slice. A bit like jammy pizza. 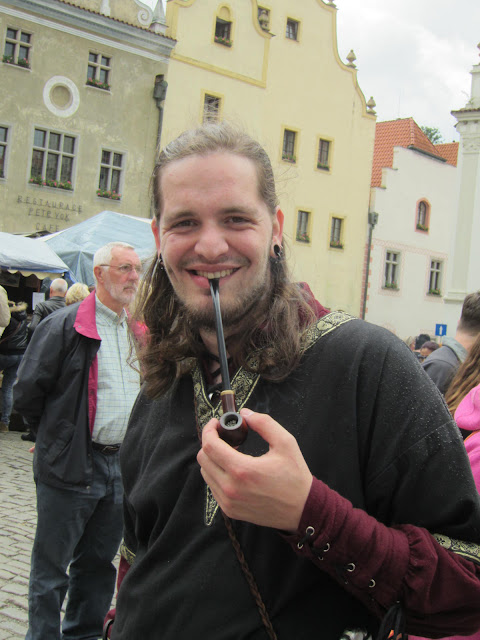 The local townspeople were dressed in medieval costumes and this handsome chap was quite happy to have his picture taken. The costumes were very elaborate and looked really authentic. I didn't ask him what he was smoking in that pipe, perhaps I should have. 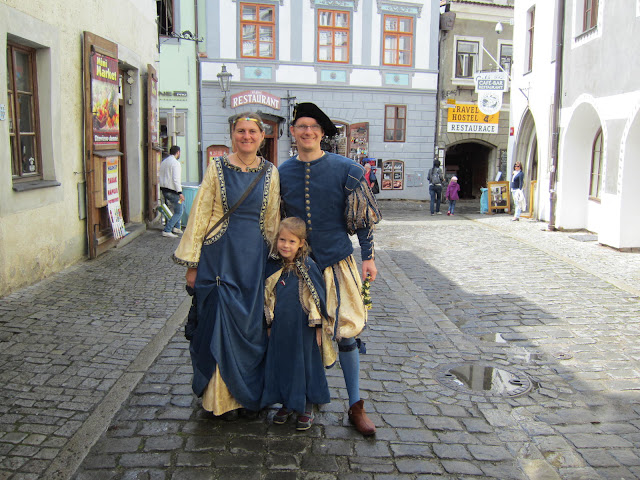 This family told us that they spent all winter researching, designing and creating their costumes. Both the husband and the wife worked on cutting and sewing the fabric. They made everything that they were wearing, except the shoes! 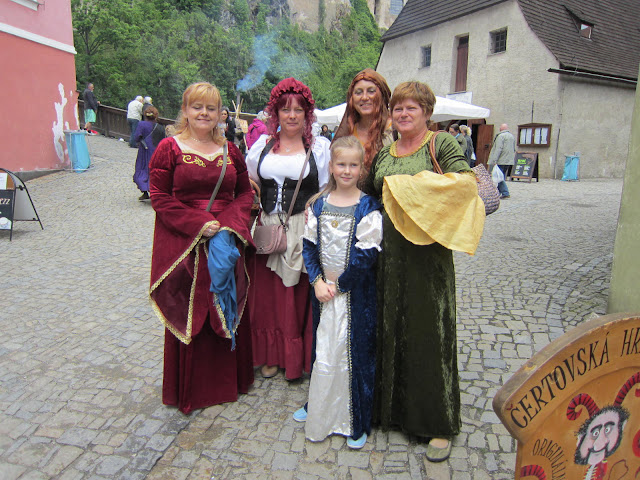 This splendidly attired group of medieval beauties were happy to pose for my camera. I wanted to thank them for the photo, but when I reached into my backpack, the red haired lady shouted "No No" and something very fast in Czech..... she thought I wanted to pay them. Then I handed her a Canada flag souvenir pin, my last one..... we all laughed! No language problems when there are lots of smiles. 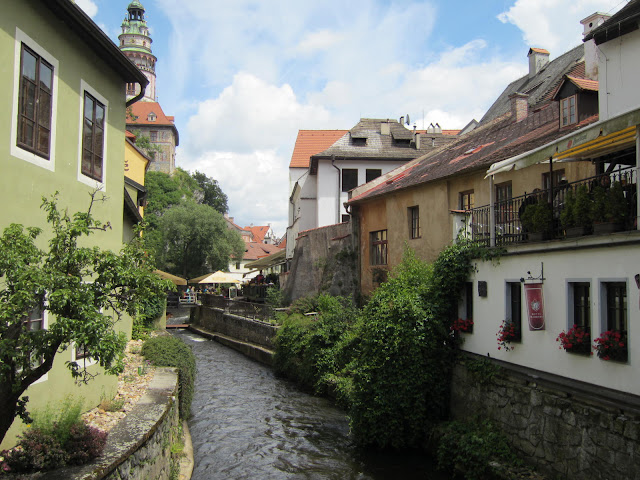 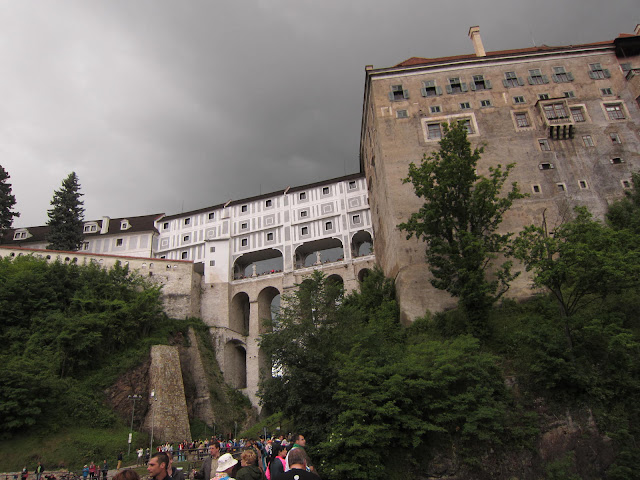 Yes, those are dark storm clouds above the castle walls. We got drenched on the way back to the coach park and then made our way to our next destination, Prague. More about our trip to come... when I get round to it!
Posted by Shammickite at 02:30