I was being a typical tourist with camera in hand.
"It's a fine view, isn't it?" The man sitting on the steps enjoying the sunshine spoke to me. 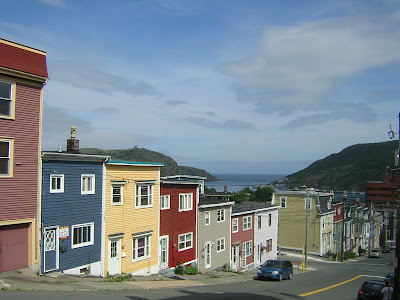 We chatted for a while and then he asked me what part of England I was originally from.
When I told him, he said he was born on the Isle of Wight.
"Oh," I said, "I've been there many times, I used to live in Southampton."
"So did I," he said.
"When I lived there, I worked at the Ordnance Survey" I said.
His eyes widened. "So did I," he said.
"I worked at the London Road office," I added.
"So did I," he said.
We compared notes and it turned out that he probably left just as I started, so our paths had not actually crossed on the other side of the Atlantic 40 years ago, although we had shared experiences and remembered the same people.
But then I asked him where he lived in Southampton.
"Oh, I lived in a boarding house run by an elderly couple known as Mom and Pop," he told me. "Pop did all the cooking and cleaning, and Mom did nothing. It was full of young men from all over the country who were employed by the Ordnance Survey."
"Was it by any chance known as 'Pop's Palace'?"I asked.
"You know it?"
"I had a boyfriend who lived there."
So it really is a small world....
Posted by Shammickite at 17:03