OK, so I copied the title!

Mad challenged all comers to a meme, which I don't usually do, but I thought, well, just this once, especially as it's -24C outside today and I won't be going out there with my camera. 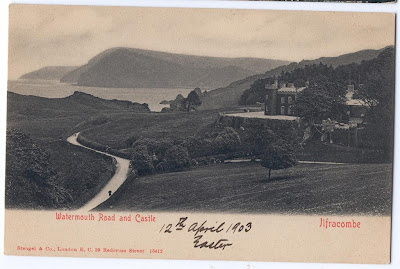 I have to admit guilt.... I pilfered this from eBay quite a while ago. It's in a folder with other historical pics of the area where I grew up. Great for family history research!

This is a post card image of Watermouth Castle in 1903, situated halfway between Ilfracombe and Combe Martin in North Devon. I passed this building every day on the green double decker bus taking me to the Grammar School in Ilfracombe.
The building was designed by George Wightwick for the Basset family in the mid 19th-century and is not a true castle, but a large Victorian country house. It's no longer a private home, but has been opened to the public as a hotel and theme park since the 1990s.

Thanks Bob, for this modern picture.

If you want to add your own Four For Four post, be my guest, I'm not tagging anyone.

Posted by Shammickite at 12:12