I bet you're thinking "Hmmm, how pathetic, she can't think of a title that starts with U. That alphabet theme is getting the better of her." Well, you're WRONG! 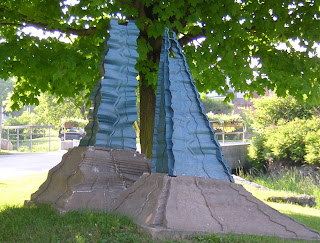 There's a Sculpture Walk along the river, and this is one of the exhibits. It's title is UNTITLED created from cast aluminum, sheathed copper and concrete by Ted Bieler in 1983.
According to the local Library, the official description is:

Perched on a small hill the upward force and movement in Ted Bieler's piece is accentuated. The sculpture consists of two cone-like shapes that ripple with activity. Many images come to mind including lightning bolts and energy waves. The colour of the painted copper also derives its sources from nature revealing the power and mysticism of flowing water or the sky.

Now, if I was going to create a scuplture that reflected lightning bolts and energy waves, power and mysticism rippling with activity, I'm sure I could think up a name a little more descriptive than UNTITLED.

What would YOU call it?

Update Saturday June 9 2007:
Thanks for all your bright suggestions. I googled Ted Bieler, and found a picture of this specific piece, and it seems to be called "Towers" so perhaps it's not "Untitled" after all!
Posted by Shammickite at 21:09