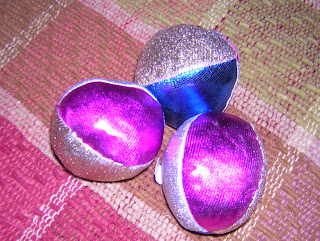 When No2Son was a lot younger, I challenged him to see who could learn to juggle three balls in the air first. I started out using tennis balls, but every time I dropped one, it bounced so far away and I got tired of chasing after it, so we changed to fabric juggling balls. They didn't escape so easily, plus they were smaller and easier to handle. I soon got the hang of keeping three balls in the air, but he rapidly developed amazing juggling skills, and in no time was able to bicycle down our street (no hands) and juggle at the same time. I wish we had a video of that!
However... have a look here. This is one of the most amazing displays of coordination talent I've ever seen. Make sure your speakers are on, and you can hear the music. His name is Chris Bliss.
Sorry, I haven't figured out how to post videos yet!
Posted by Shammickite at 20:17 9 comments: 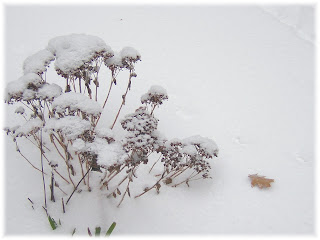 A little bit of snow overnight, and milder temperatures, alleviating the harsh -18C of the last two nights (that's -0.4F if you don't know Celcius). Pretty cold! Thank goodness for a warm duvet. Snow crunching underfoot as we went out for breakfast this morning. What a luxury to have bacon and eggs and fresh coffee made for us at the local restaurant. We don't do it often as it seems like an extravagance, but once in a while it starts the day off on the right foot.

Happy Birthday to Robert Burns, the National Poet of Scotland. More can be found about him here. He celebrates his 248th birthday today. He looks pretty good for his age, doesn't he?
Posted by Shammickite at 09:23 11 comments:

Triceratops on the rampage! 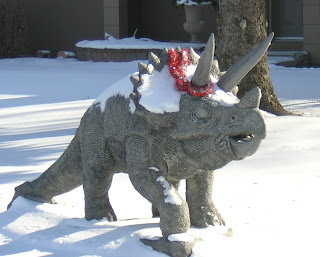 At this time of year there's slim pickings in the deep dark forests, and rampaging herds of hungry triceratops can be found trampling snowy front yards all across Ontario in search of left-over Christmas cake.
This one has tried to disguise itself as a Christmas tree, but is obviously not very bright as it's unaware that Christmas finished almost a month ago.
Watch out for these incredibly dangerous creatures. If you see one..... offer it some stale fruit cake, even better if there's some marzipan and icing on it, and then..... RUN!
Posted by Shammickite at 21:55 8 comments: 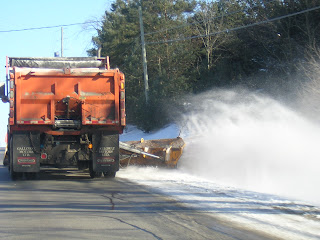 We haven't had much snow yet this winter, but the snow plows soon take care of it. Those snow plow drivers do a great job!
This Region has an $11.5 million Winter Maintenance program, with $2.5 million budgeted for salt alone.
Number of vehicles for winter maintenance 64
Average time for salt or sand spreading (one round of all Regional roads) 90 minutes
Average time for plowing and salting/sanding (one round of all Regional roads) 130 minutes
Average amount of salt used (one round) 340 tonnes
Kilometres of Regional Roads 1,049 km
Lane kilometres of Regional Roads 3,479 km
Cost of salt per tonne $70.59
Cost of salt (one round) $24,000
Cost of salt-brine (one round) $11,500
Cost of one round of salting (includes equipment and labour) $43,000
Cost of one round of plowing (includes one round of salting, equip. & labour) $44,500
So that's where my tax money's going!
Posted by Shammickite at 21:16 8 comments: 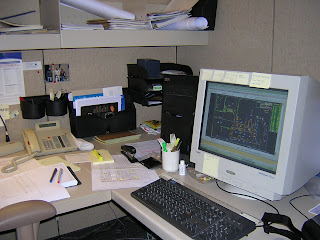 The Festive Season is over. I've been back at work for more than a week. Whaddya mean, my office is a mess? I know where everything is! Ummm... has anyone seen my pencil? 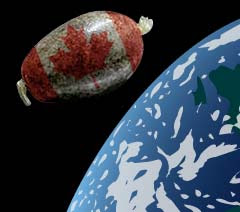 Edited January 15 2017: There have been a lot of visitors to this blog post recently as it's getting close to Burns Day, so if you use any of this "Reply to the Toast to the Lassies", please leave a comment and let me know where you're from, and tell me about your Burns Day celebrations!

Yesterday we celebrated Robbie Burns Day (a little early, the real date is 25 January) with a traditional Robbie Burns Supper for 160 people. On the menu: roast beef, HAGGIS, mashed tatties, peas, champit neeps, gravy, followed by pies and shortbread. The haggis was piped in by a Highland bagpiper to the strains of Scotland the Brave. Silly me forgot to take the camera so I "borrowed" this pic from the internet.
The Space Cadet was given the task of giving The Toast to the Lassies, which he did with poetry and a lot of laughs, and I was elected to give the Reply to the Toast to the Lassies. I was kinda nervous to stand on the stage in front of 160 people, however here's my speech:

Thank you. Such inspired poetry!
What a pity Robbie Burns himself can’t be here to hear you, I’m sure he would be sitting with his mouth open struck completely speechless at your poetic talents…

I have to admit I was a little surprised when asked to give the Reply to the Toast to the Lassies this evening, as I don’t have a single drop of Scottish blood in me. Sorry, it’s all English!
However, many years ago, I was forced to stay overnight in Scotland when my plane broke down at Prestwick Airport on a flight from London to Toronto, so perhaps one night at the Railway Hotel in Glasgow qualifies me for the task. And if any of you have ever stayed at the Railway Hotel, you'll know it's not for the fainthearted.

First, a little story:
Our minister (name withheld to protect the innocent) was visiting patients at the local Hospital the other day.
She asked the first patient “How are you feeling today?”
First patient “ Well, here’s a hand my trusty fiere and here’s a hand of mine…”A little surprised, she spoke to a second patient “And how are you feeling today?”
Second patient’s reply “O would some power the giftie gie us to see ourselves as others see us.”Astonished at the answer, she moved on to talk to a third patient.
The third patient replied "The best-laid schemes o' mice an 'men gang aft agley."
Amazed, our minister turned to the doctor in charge, and asked “Is this the psychiatric ward?”
“Oh no” replied the doctor, “This is the burns unit.”

(You have to know a bit of Burns to get this joke!)

Robbie Burns certainly loved the lassies, and many of them, of that there is no doubt.
You have a Burns poem about you if your name is Anna, Alison, Katie, Mary, Jeanie, Chloris, Clarinda, Nancy, Nell, Molly, Polly, Peggy, Bessie, Jessie, Eliza, Maria, and Delia.
And probably a few others who I have missed.

Of course, the love of his life was Jean Armour. Jeanie had four children by him before Robbie married her, five more after, and he fathered several more children with other ladyfriends during their marriage. He certainly loved those lassies!

It is said that there are three rings in marriage. The engagement ring, the wedding ring, and suffering.
Of wedding rings, Burns wrote:


"She asked why wedding rings are made of gold;
I ventured this to instruct her;
Why, madam, love and lightning are the same,
On earth they glance, from Heaven they came.
Love is the soul's electric flame,
And gold its best conductor."

You men may not be great believers in the institution of marriage, but let me remind you of something. There is only one thing worse than being a bachelor - and that is being the son of a bachelor!

Here’s a few facts about the laddies:

· Men love to barbecue. Men will cook if danger is involved.
· Men who have pierced ears are better prepared for marriage. They've experienced pain and bought jewelry.
· Men think that they are marrying Miss Right, but unfortunately her first name usually turns out to be Always.
· Any married man should forget his mistakes - no use in two people remembering the same thing.
· A successful man is one who makes more money than his wife can spend. A successful woman is one who can find such a man.
· Men hate going shopping. That's why the men's department is usually on the first floor of a department store, two feet from the door.
· When men play their favourite game, golf, they yell “Fore”, hit six, and write down four.

So ladies, stand, and drink a toast
To the lads we honour most
They are heroes, strong and Spartan
They are our heroes wearing Tartan!
Ladies, raise your glasses for a toast… To the laddies!
Posted by Shammickite at 10:47 20 comments: 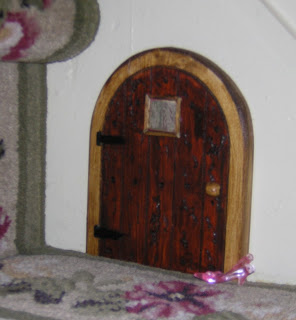 A tiny fairy door has appeared on my stairs. I haven't actually seen any fairies yet, but they must have moved in as one of them has left her shoes behind. 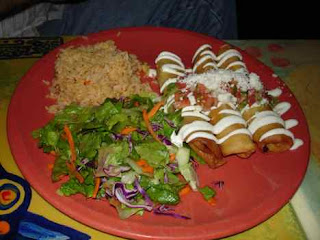 For a few years now, our extended family Christmas/New Year tradition is to go out for Mexican food followed by a movie. Last night was the chosen night. Mariachi's on Yonge Street.... great food, not too spicy, Mariachi music in the background, good cold Mexican beer, good company, good service. Then the movie. Let me insert a warning here. If you are inclined to see "For Your Consideration" I suggest you use some reconsideration... IMHO it's absolute rubbish! I should have known when we first entered the cinema, there were only 12 people watching the film, and eight of them were US!
Posted by Shammickite at 13:27 10 comments:

Can you believe it's 2007 already? Remember all that Y2K panic and dire warnings of the end of the civilised world? People stocking up on propane and candles and tinned Spam? That was SEVEN years ago???? Seems like only last week.

2007 holds a lot of promise. To start with, 7 is definitely a lucky number. And 007... well, the implications of the triumph of good over evil are obvious.

Here's my list of good things that I'm looking forward to:
to be continued....
Posted by Shammickite at 17:02 4 comments: