Christmas Eve in The Great White North.... and soon I'll be heading to OlderSon and The Equestrienne's country estate to wait for the arrival of Santa Claus with Callum. I wonder if we'll hear those sleighbells ringing in the night? My dad always went outside to listen on Christmas Eve, and when he came in he always said he heard bells jingling in the distance. I could never hear them, no matter how hard I tried, and the fact that he could hear them was amazing to me, as he actually was deaf as a post! 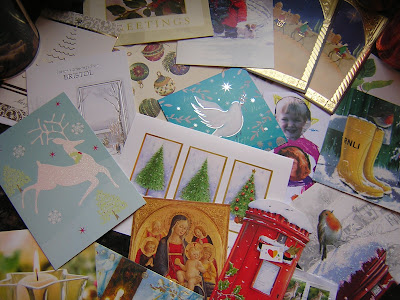 So I'm taking this opportunity to wish all my blog friends a Happy Christmas, Hannukah, Kwanzaa, whatever you celebrate, may you enjoy the good company of friends and family, and may 2010 be good to you!

Our busy Main Street shut down completely at 9:00am this morning. There were RCMP vehicles on standby, and York Regional Police cars with their lights flashing, and the road was choked with thousands of cheering patriotic Canadians, wearing red and white and waving our Maple Leaf flag. 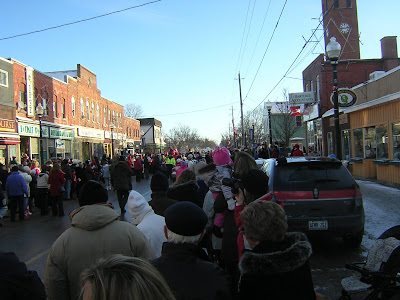 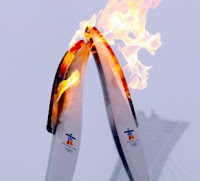 Why all the excitement?

The Olympic Flame was coming through town.

The route was lined with enthusiastic supporters. See the Canadian Olympic gloves the girl on the left is wearing? I desperately want to buy a pair, but they're always sold out. 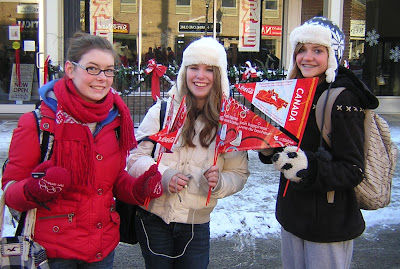 The Town Crier arrived on a horse-drawn carriage to announce the Flame's imminent arrival. 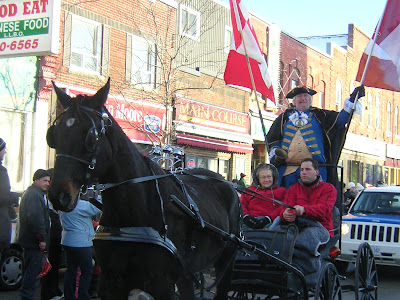 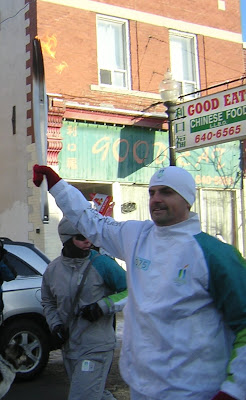 The Olympic Flame was carried along Main Street by at least fourteen different torch bearers, with the crowds cheering loudly each time the flame was handed off to a new runner.

A school band played "O Canada" from the snow-lined sidewalk, and hundreds of students from nearby schools were in the crowd. Mike Harris, who won silver in curling at the Nagano Games in 1998, was in the crowd in his Team Canada jacket.

The Flame is crossing Canada to herald the 2010 Winter Olympics in Vancouver. You can follow the progress here.

These kids were waving their flags and chanting "Canada! Canada!" for the benefit of a News television camera crew. No doubt they'll be looking for themselves on the local news broadcast tonight. 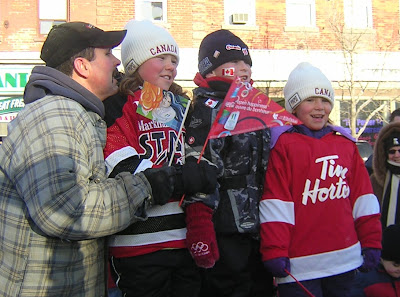 Inside the new Arts and Culture Centre, video clips of the Olympic torch’s history as well as how this torch was made and the torch relay through Canada were shown on the giant screen.
Karen Cockburn was signing autographs and displaying her Olympic medals. Isaac was very impressed.... he is definitely inspired and he told me he wants to be an Olympic athlete in training when he grows up. Karen let me hold her medals.... ooooh... real Olympic Silver! 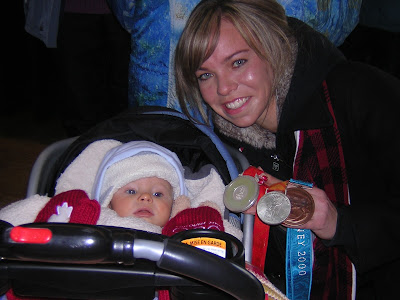 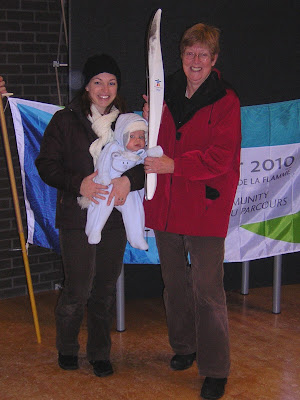 And then The Bride and I helped Isaac hold the Olympic Torch for a special picture.

YoungerSon, Isaac's dad, was 6 years old when he had a candle lighted with the Olympic Flame at our town's Olympic Torch Ceremony for the 1988 Winter Olympics that were held in Calgary.

The Olympic Cauldron will be lit in Vancouver on February 12, 2010, during the Opening Ceremonies of the Winter Games.

Another picture of the Flame handover here. Thanks Ken.
Posted by Shammickite at 19:38 25 comments:

My lovely DIL, The Equestrienne, bought a funny looking cake pan, and made..... 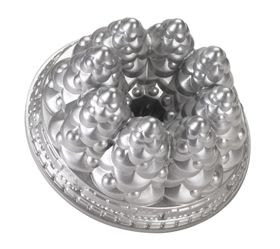 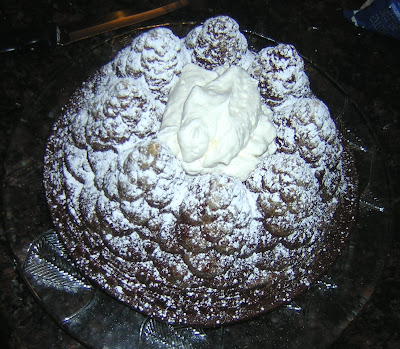 It looks like a chocolate scale model of the Himalayas, sprinkled with icing sugar snow and a glacier of whipped cream nestled in the middle.
OH YUM!
Posted by Shammickite at 13:24 19 comments:

One Of A Kind Show

The One Of A Kind Show happens in Toronto twice a year, at Easter and Christmas. I went with my neighbours yesterday. A very special place to do some Christmas shopping for unique handmade items.
Aisle after aisle of colourful well-stocked booths selling everything from tobogganing Christmas geese for your roof..... 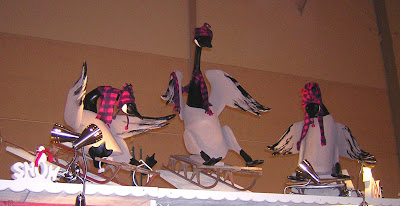 ....to a lifesize woodnymph emerging from a treetrunk, with driftwood hair blowing in the breeze. 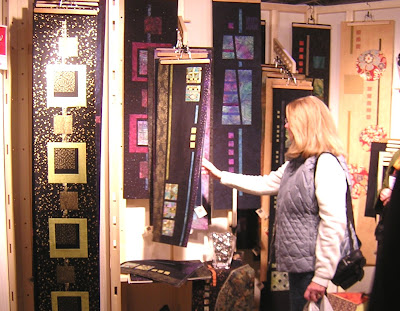 .... and gorgeous handmade quilts and teacosies, in vivid colours that lift your spirits and light your home with gladness. 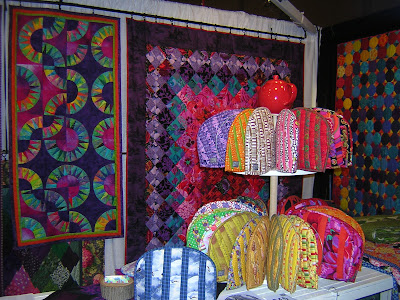 And a special treat.... I met fellow blogger Shawn of Island Sweet in her booth. Shawn knits and spins in Newfoundland and creates beautiful handmade textiles and yarns. She told me she had sold all her stock, and was taking orders.... visit her at Island Sweet to see the gorgeous things she makes. Lovely to meet you at last, Shawn!
Posted by Shammickite at 13:13 17 comments: