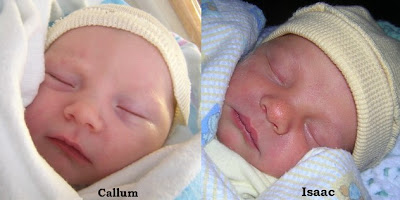 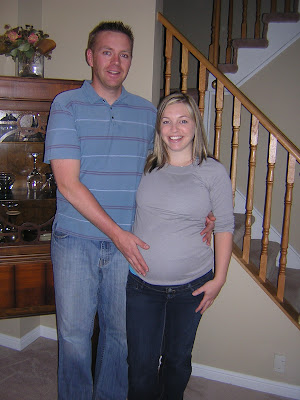 And now, the "after" picture! 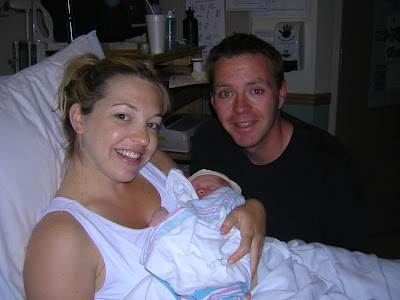 The world said hello to Baby ISAAC DAVID at 8:05a.m. this morning. 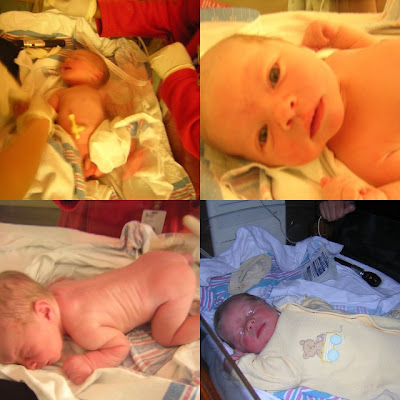 7lbs 10oz, and 20-1/2" long.
Of course, I embarrassed myself by bursting into tears at the first sight of him. He's gorgeous! He has the full complement of fingers and toes and a working set of powerful lungs. The midwife and the nurse gave him a thorough inspection and pronounced him PERFECT! He's at home getting to know his mummy and daddy now, only a few hours old. I'm a very happy Nana.
Welcome to the big wide world, Baby Isaac.
Posted by Shammickite at 16:51 24 comments:

Most of the 27 apartments have been rented out this spring, and soon we'll hear the cheeping of hungry baby chicks.
27? 7 apartments on each of 4 sides is 28, right?
One of the penthouses goes right through with a front door and a back door. 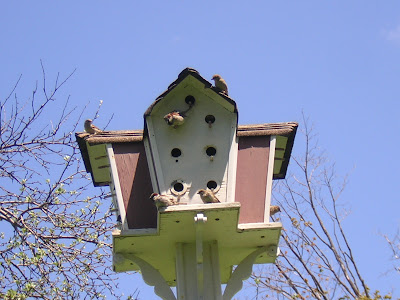 I charge double the rent on that one.
Posted by Shammickite at 17:33 15 comments:

I paid a visit to one of the larger plant nurseries in my neighbourhood. I lost count of the number of greenhouses under one roof. It's huge! The place was swarming with people stocking their flower and veggie gardens for the coming summer, although these pics make it seem like there was no-one there but me. 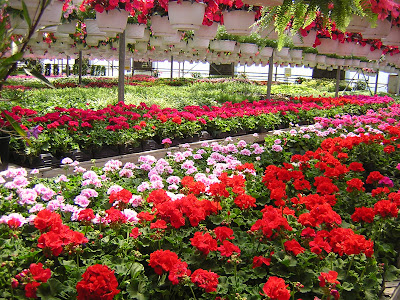 All the perennials are outside and the tender colourful annuals are displayed inside the greenhouses. Most people spend quite a lot on annuals for their flowerbeds, and of course, the tender plants don't survive the severe Canadian winter. 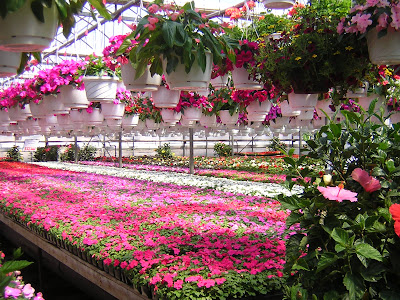 The heavy scent of blossom hit me as I walked into the greenhouse. And the colours are stunning. 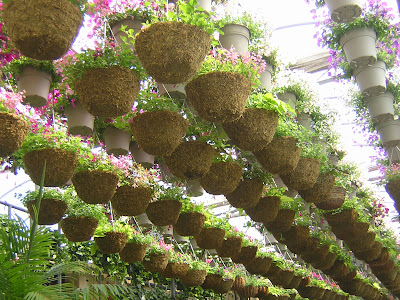 I'm not ready to buy annuals yet, it's quite cool at night and we can still experience an overnight frost in May here in Southern Ontario. 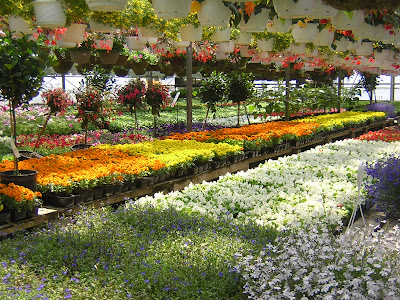 I visited Sharon Temple this weekend, a fascinating place.

Sharon Temple was constructed between 1825 and 1831 by The Children of Peace, former Quakers with a philosophy based on the values of peace, equality and social justice. 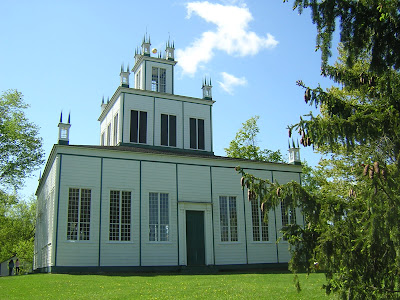 The leader of the sect was David Willson, who was born in New York State in 1778 and migrated to Canada in 1801. After his dismissal from the Quakers, Willson established The Children of Peace incorporating some Quaker doctrines, elements of mysticism and Jewish ceremony. 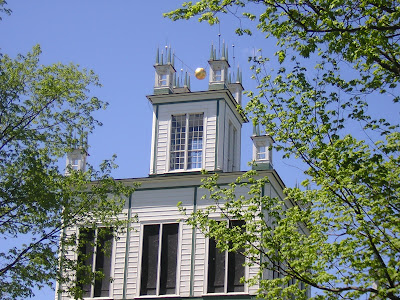 The Temple was designed as an architectural representation of the sect's philosophy. The square shape and the centre doors on each side symbolize equal acceptance of people from all directions.
The three storeys represent the Holy Trinity. 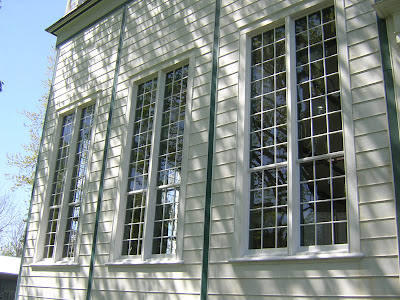 The windows contain 2,952 panes of glass and are lighted on the first Friday night of September every year with 116 candles. 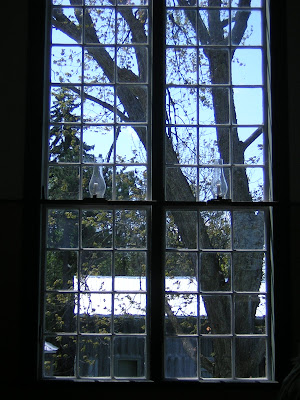 The Temple was not a church. It had only one purpose; the Children of Peace met there once a month to raise alms for the poor. 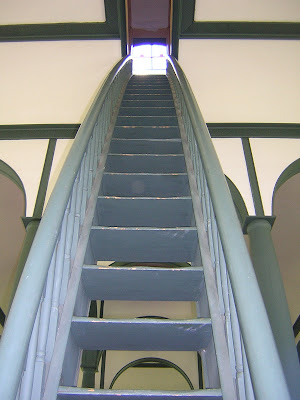 The elegant curved staircase leading to the musicians' gallery is known as Jacob's Ladder. 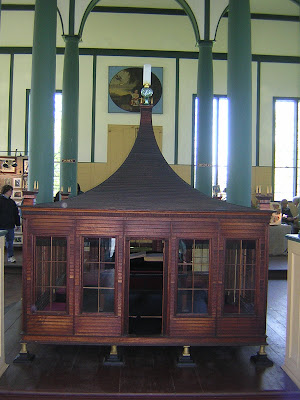 In the centre of the is the tabernacle – remarkable design, proportion and wood joinery. 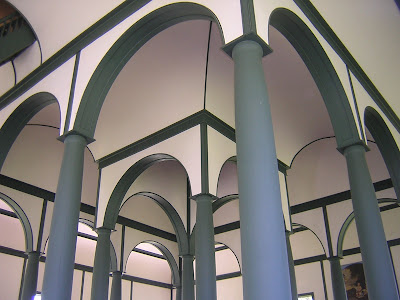 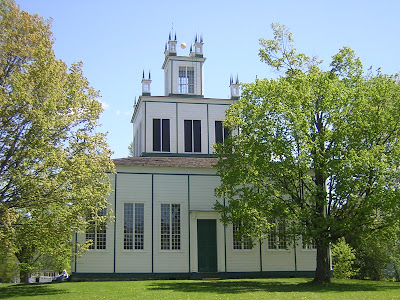 After Willson's death in 1866 the sect slowly diminished. The last service was held in the Temple in 1889. The derelict Temple was purchased by the York Pioneer and Historical Society in 1917, and restored, making it one of the earliest examples of historic preservation in Canada.
Posted by Shammickite at 21:17 16 comments:

Spring Flowers and a Makeshift Sandbox

I think the sunshiney colours of spring are what I look forward to the most. The winter in Ontario is long and cold and everything is painted in sepia tones, or shades of white and brown and grey. Perhaps that's what makes me look forward the spring flowers so much... new growth, delicate shades of yellow and pink and green, another season in my garden. 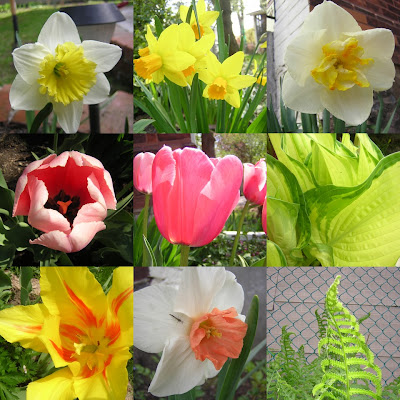 And with the arrival of spring comes outdoor fun. Callum's old enough to enjoy playing outside now, last year he was just a baby. Daddy has bought him a nice new sandbox, but it hasn't been put together yet, so we improvised with a baby bath in the back yard. 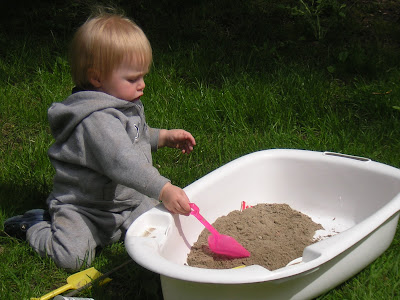 He thought it was the best fun ever, and managed to cover himself with sand. Grass stains on the knees are a sign of many more sandbox sessions to come. 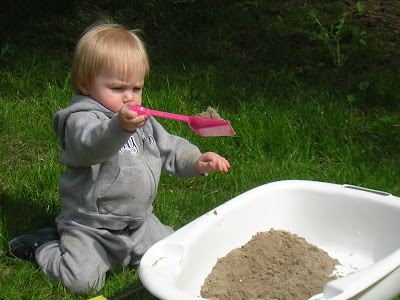 But sometimes you need a detailed inspection of what you're doing, just to make sure you're doing it right. 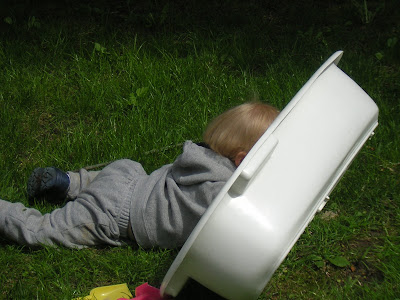 What's that creepycrawly thing... an ant? In my baby bath sandbox? I need a closer look..... 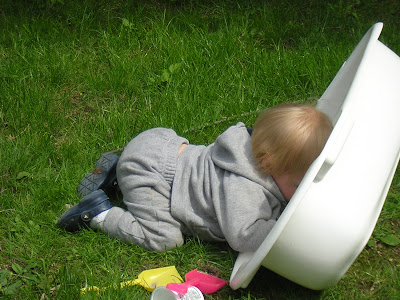 Recycled doorknobs as decorations for your garden..... 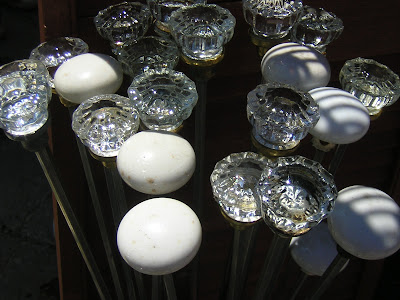 Driving home from a Mother's Day Lunch at YoungerSon's house on Saturday, the only predictable thing about the weather was that it was unpredictable. 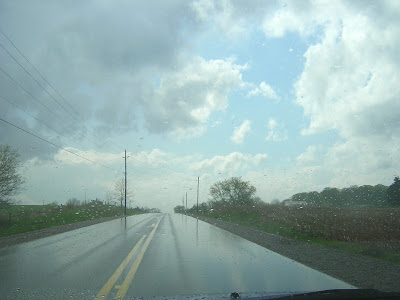 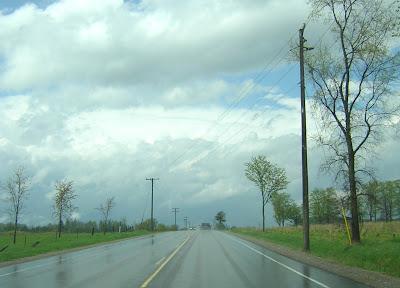 There were even reports of golf ball sized hail, but not on my route home, thank goodness.
Dents in my new car are exactly what I don't need.
Posted by Shammickite at 11:04 15 comments:

It was inevitable, and everyone knew it was going to happen, but it's still sad to see it go.

This building was constructed in the 1850s and was first a general store, then a post office, and has been known as Da Classic Scoop, serving ice cream, big breakfasts, homemade soups and hearty sandwiches since 1990. 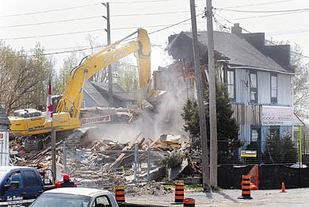 In it's heyday it was a favourite stop for the Red Hat Ladies.

The town was willing to give the building away to anyone who cared to move it, but sadly, there were no takers and so..... Goodbye, Classic Scoop. You'll be missed.
Photo: Stouffville Sun-Tribune
Posted by Shammickite at 08:57 14 comments:

Ahhhh! It's all over for another year.
I don't know whether to be sad or relieved!
The planning, the meetings, the phone calls, the emails, the rehearsals, the costume sewing, the props, the makeup, the tickets, the posters, and of course, the performances!
And we'll be doing it all again in 2010. 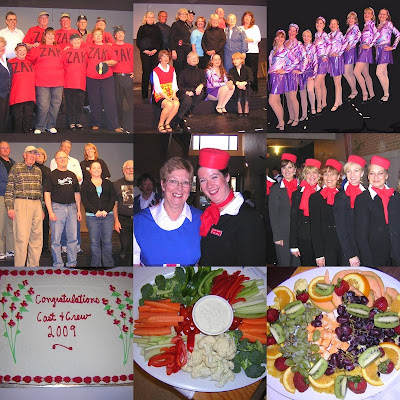 Thursday was over threequarters full, which is great for a Thursday.
Friday was our best audience night, with Standing Room Only. More and more people arrived and our student helpers had to find more chairs, fast.
Saturday Matinee was mostly seniors and families with young children... a fairly quiet audience.... but on Saturday night we got what every show cast loves to see... a Standing Ovation! 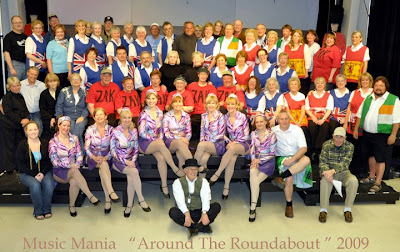 Planning has already started for our show in 2010, and it will be the 50th year of Music Mania in our small town, so we are planning something spectacular..... stay tuned.
Posted by Shammickite at 20:26 13 comments:

OlderSon and The Equestrienne live with Callum, and share their home with prancing steed Maeve, moggies Everest and Fuji, and the enormous hairy rescue dog Badger.
R.I.P. Leon and Jojo, two furry feline friends.
YoungerSon and The Bride live with Isaac, Max and Emma, barn cat Smudge, Lucy the goose, a flock of laying hens, and Tessa the Golden Doodle.