Are you ready for a story? It's a really long one.

OK, make yourself a cuppa tea and listen closely.

It is February 1829. Probably cold and rainy, perhaps a touch of frost in the air.
25 year old Keziah Leveridge has brought her new baby son William to church to be baptised by the minister at Carbrooke, Norfolk, in England. But Keziah has no husband, (gasp! how shocking!) so William is given the middle name Tolman, after his father, Samuel Tolman, Keziah's sweetheart.

Now it's November 1836. Keziah and Samuel are married in the same church at Carbrooke. Their son William Tolman Leveridge is 7 years old.

Young William grows up to learn the blacksmith's trade in Carbrooke, and joins the Army to become a farrier shoeing the horses of the Kings 1st Dragoon Guards Regiment. In October 1856, the Regiment is stationed at Topsham Barracks in Exeter in Devon, where 27 year old William meets Ellen Dolling, a pretty servant girl. William and Ellen are married in Exeter in April 1857, but two months later William and the 1st Dragoon Guards are sent first to the barracks at Aldershot, then to India, and finally to China.

William and Ellen's daughter Jane Keziah Tolman Loveridge is born a month later in July 1857. (Apparently it was a shotgun wedding.} Baby Jane and her mother travel to Norfolk where Jane is baptised at St Peter and Paul Church in Carbrooke in September that year.

In 1860, William is wounded, and leaves the Regiment. He returns to Carbrooke, Norfolk to live with his parents, Samuel and Keziah, where he continues work as a blacksmith. His father Samuel at this time is one of the many gamekeepers working for Lord Walsingham at nearby Merton Hall.

William and Ellen decide to pursue new opportunities in Dewsbury, Yorkshire, in 1862, taking their new son, also named William, but daughter Jane stays with her grandparents, Samuel and Keziah Tolman. There is no evidence that Jane ever saw her parents again. More Leveridge children are born in Leeds where William works as a farrier and Ellen is a busy midwife.

Now it's December 1872. Jane marries her blacksmith sweetheart Charles Barham at Rockland St. Peter, not far from her home in Carbrooke. Was she really only 15?

Soon the babies arrive in the Barham family. Bertha is born in 1874, William John in 1876, and Julia Anne in 1878. But disaster strikes the family when Charles dies of "acute bronchitis 11 days" when baby Julia is only 2 months old. Jane has no income and can't support three small children, so she and the two little girls go to live with her Tolman grandparents Samuel and Keziah, and little William John goes to live with his Barham grandparents.

By 1881, Samuel Tolman is the proprietor of the village shop in Thompson, Norfolk, with his widowed granddaughter Jane helping him. But 2 years later in early 1883, the family celebrates a wedding. Jane marries William Alfred Betts and by the end of the year, Bertha and Julia have a little half-brother, James.

But Samuel is getting older and weaker. His death in1884 is due to "Decay of nature" and is followed by Keziah's death in 1885. They are buried in the graveyard at Thompson.

Jane and William Betts continue to run the village shop for many years. More children are born, Ethel Kezia in 1889, Herbert Victor in1892, and Ivy Ellen in 1896.

But all is not well in the family. Julia does not get along with her step-father, and leaves home to live with her Barham uncle.... (missing a whole lot out here) .... and became my grandmother!
-----o-o-o-----
I went to Thompson with my cousin. We wanted to see the church where Jane and William Betts were married, and perhaps find some family gravestones. 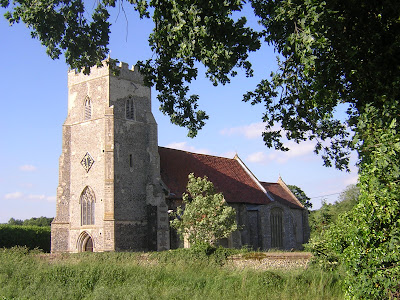 St Martin's Church dates from the 1300s. When we opened the heavy oak door, it swung inwards with a ghostly creak, and a rush of cold air greeted us from inside the church. Perfect!
Can you imagine Jane and William, kneeling at the altar, with Samuel and Keziah sitting there on the left, telling 9 year old Bertha and 5 year old Julia to be quiet and sit still during the wedding service. 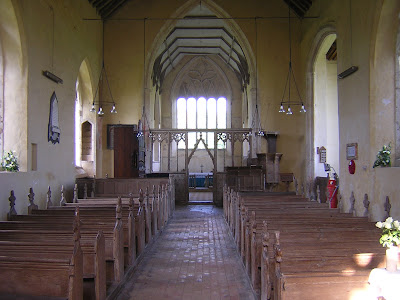 Much of the interior of the church has not been changed since the 1600s, mostly due to neglect. The nearby church at Merton was used by the various Lord Walsinghams, who lived at Merton Hall, and that was the church that got all the TLC.

Perhaps Jane baptised her children at this ancient stone font. 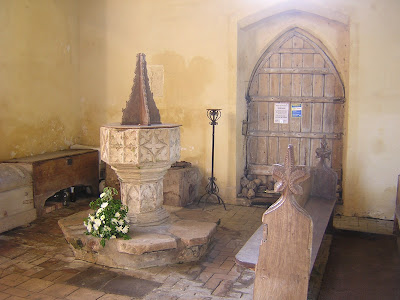 The ancient woodwork is silvery and smooth, hand carved with wheat and poppies, often with a date... this one reads 1632. There is moss growing on the floor in some corners, and there is a feeling of calm and serenity throughout the church. 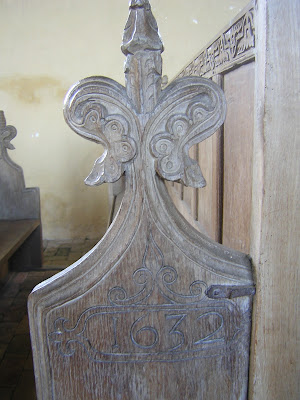 But the graveyard didn't hold out much hope for finding family markers. 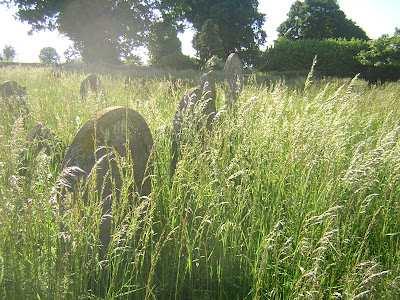 Time to cut the grass, perhaps?
For previous posts about my vacation in England, please scroll down.
Posted by Shammickite at 10:45 15 comments:

Anne Boleyn was born here at Blickling Hall in 1507, or so they say.

Anne was a maid-of-honour to Henry VIII's first wife, Queen Katharine. When Henry first set eyes on Anne, he became infatuated with her. She resisted his attentions and refused to become his mistress, as her sister Mary had, so there was nothing Henry could do but declare an annullment from Wife #1 and make Anne Wife #2. (4 more to go!)

Unfortunately for Anne, this wasn't a Good Thing. She lost her head in 1536 after being falsely accused of adultery, incest and high treason.

But her daughter Elizabeth went on to reign as Queen over England for 45 years. 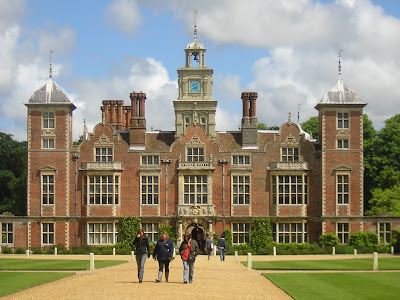 This English country house began as a manor house in the 11th century. Since then it has been the site of a Bishop's palace and a moated house.

The current Jacobean building was built on the ruins of the Boleyn property some time before 1616. It boasts a huge collection of 12,000 rare books in the Long Gallery.
Three women are employed to dust the books.... it takes them about a year to dust them all, and then they have to start again. 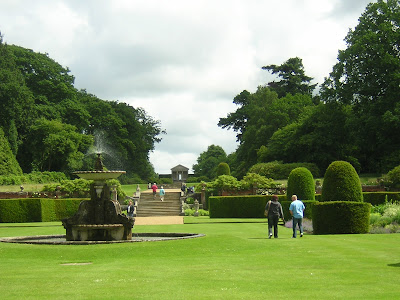 In the 1860s a flower parterre was added on the east side of the house. The parterre is dotted with yew topiary shaped as giant acorns and grand pianos. 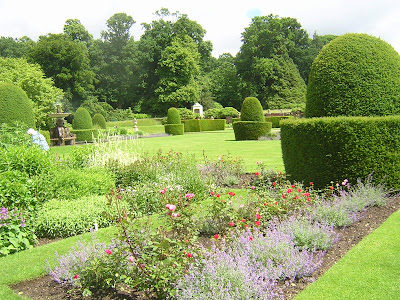 The beds closest to the house are planted with cool colours (pink, blue, and white) and those furthest away from the house are bright colours. 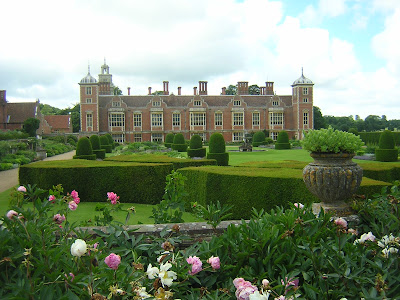 Blickling Hall was voted the most haunted house in Britain in a survey in October 2007.
Luckily for me, I didn't come across the unlucky Anne or any other members of the Boleyn family, headless or otherwise.
For previous posts about my vacation in England, scroll down.
Posted by Shammickite at 20:56 10 comments:

Continuing from the Eye along the Thames South Bank, I stopped at Blackfriars Railway Bridge.
The original Blackfriars Railway Bridge was completed in 1864 to carry the London Chatham & Dover Railway. Four tracks soon proved to be inadequate, and a second railway bridge was opened in 1886. The original bridge was demolished in 1984.
One of the restored cast-iron shields from the original bridge bearing the insignia of the LCDR is on display on the South Bank. 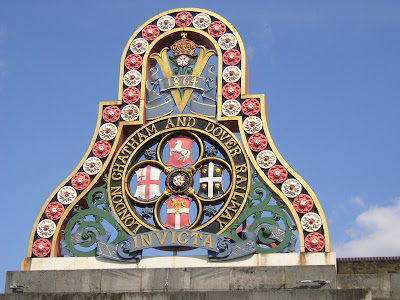 St Paul's Cathedral is the fourth church on the same site, and was designed by the court architect Sir Christopher Wren. It was built between 1675 and 1710 after its predecessor was destroyed in the Great Fire of London of 1666.

(I know that St Paul's is situated on the north bank of the Thames, but the pic was taken from the south bank.)
My first visit to London was when I was about 13, and my aunt took me to St Paul's. We went right to the top of the Dome, very impressive for a girl from the country who had never seen a big city before. On the way up we went to the Whispering Gallery, where a whisper against the wall one one side can easily be heard on the other side of the dome. 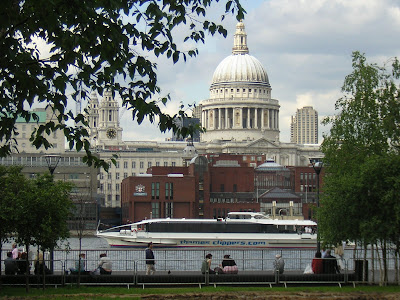 This rather rude individual is painted on the wall of the Tate Modern, and he's an obvious favourite with tourist cameras. Britain's national museum of international modern art is housed in the former Bankside Power Station which closed in 1981. And like all great galleries, it's FREE!
Lots of great stuff in here... and lots of stuff I really don't appreciate too... well, that's modern art for ya! 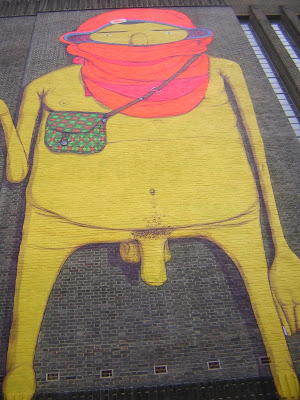 My London wanderings drew to a close with dinner with cousins and a performance of "Pygmalion" by George Bernard Shaw at the Old Vic Theatre. This Grand Old Lady was built in 1818, and sported many names and owners, finally being known as the Old Vic 100 years later. Canadian "Honest Ed" Mirvish owned the theatre from 1982 to 1998, restoring the old building to it's former glory.
Current artistic director is Kevin Spacey... remember him? He won the 1999 Best Actor Oscar for "American Beauty". Lerner and Loewe's musical "My Fair Lady" is based on Shaw's "Pygmalion", and I was half expecting the actors to burst into song at any minute, but of course they didn't. Now I shall have to watch "My Fair Lady" again, just to satisfy my curiosity, and to remind myself of all those lovely songs.
For previous posts about my vacation in England, scroll down.
Posted by Shammickite at 19:44 19 comments:

England Part I - The London Eye

On 5 June 2008 it was announced that 30 million people had ridden on the London Eye since its opening in March 2000.

I'm pretty certain that the 30 millionth person was ME!

(Well.... actually I rode the Eye on June 4, but it obviously took until the next day to confirm the numbers. It was definitely me! No doubt whatsoever in my mind.) 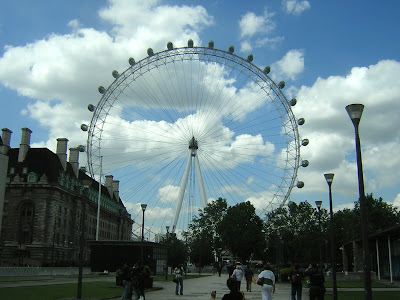 The Eye is an impressive structure no matter which way you look at it. 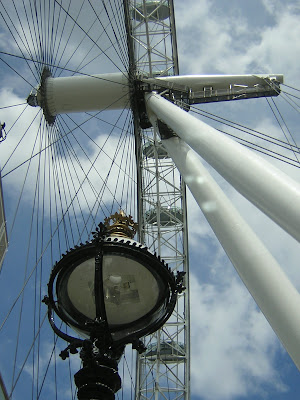 I rode in a glass pod with air conditioning, thank goodness, you could sizzle in there on a hot sunny day. Each pod rotates on a special device designed to keep everyone upright as the wheel turns. 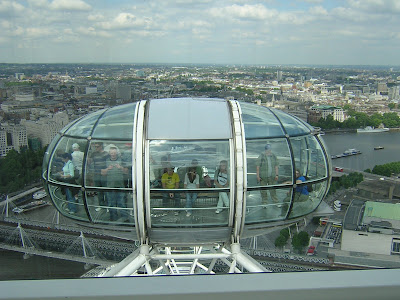 The view is spectacular. Need I say more? The Eye took me 135 metres above the City of London, taking 30 minutes to travel one revolution so there's loads of time to spot landmarks.

This is looking at the Thames downstream, with St Paul's Cathedral in the centre of the picture and the Gherkin extreme right.... 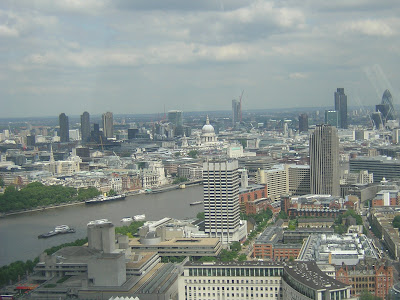 .... and upstream, Battersea Power Station in the distance. 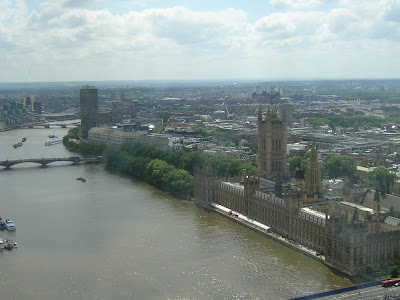 Westminster Abbey is the light coloured building behind Big Ben. 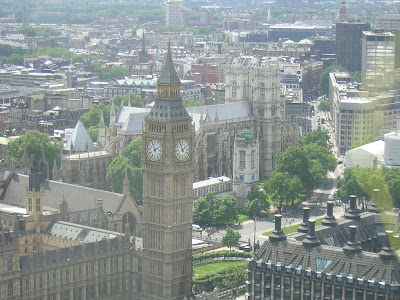 Buckingham Palace and St James' Park in the centre of the picture. This is the middle of London and look at all those trees! 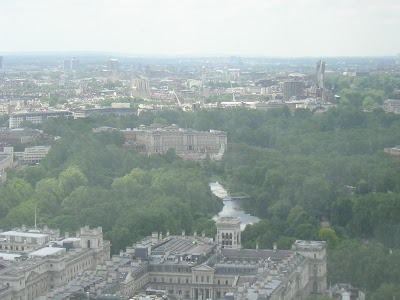 Big Ben and the Houses of Parliament at Westminster. 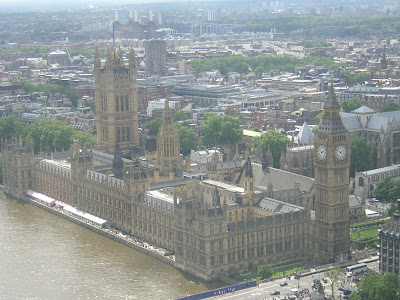 I was lucky to spend a whole day sightseeing in London, so more pics soon.
Posted by Shammickite at 18:42 20 comments:

It takes a while, doesn't it?
I've been back since Friday evening, but I'm still waking up in the middle of the night and looking f0r my bed by 9pm. Another couple of days and I'll be back to normal.