I've been dabbling with the paintbrushes again. I took another acrylics painting course with my art teacher, which I really enjoyed and felt I learned a lot, but sometimes there are so many things to remember when planning a painting that I get overwhelmed and all inspiration flies out of the window. 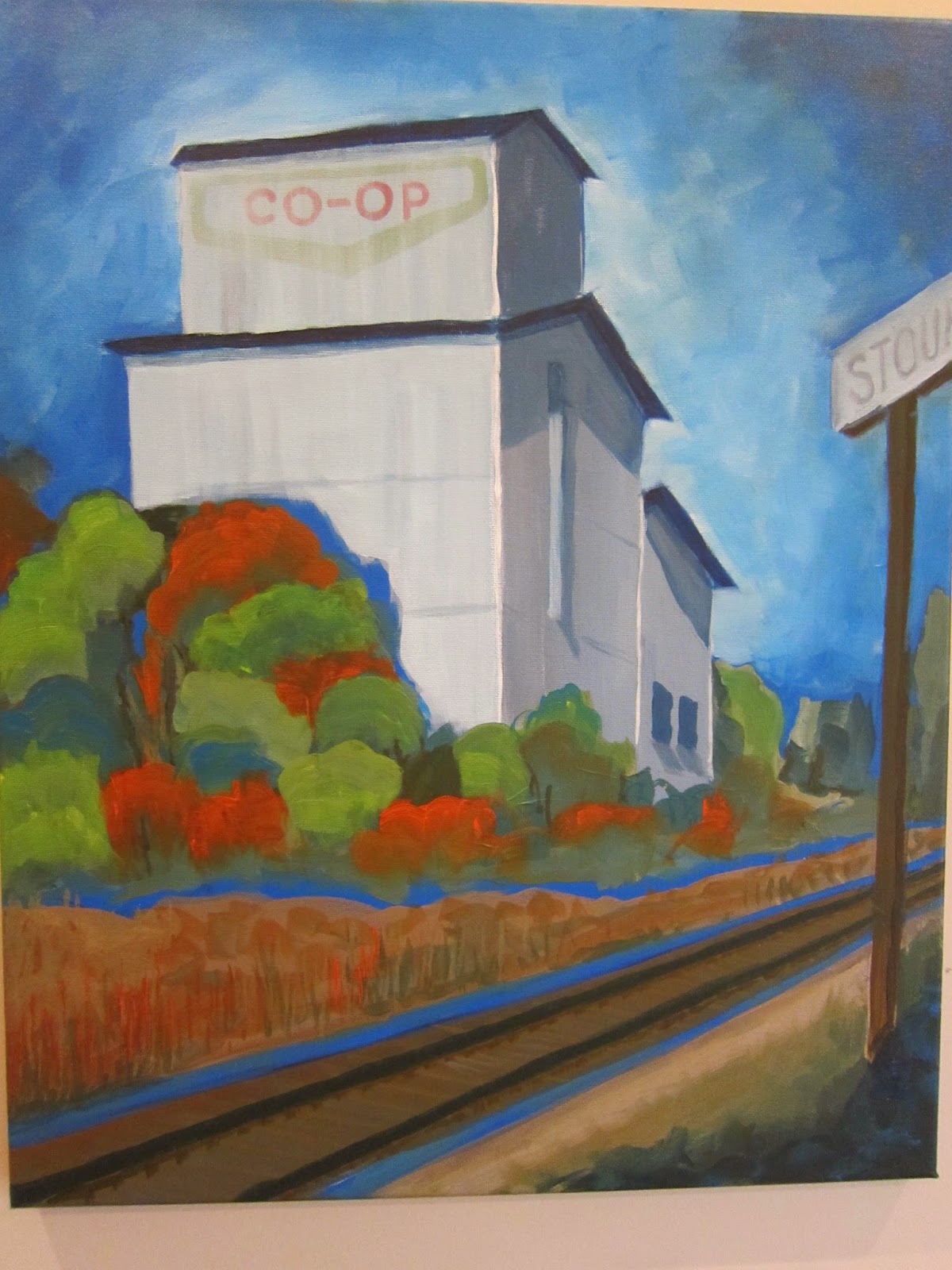 16"x20" This is the old Co-Operative grain elevator beside the railway tracks in town. It's been disused for at least 25 years, and I'm sure it will be demolished eventually, as it's considered a dangerous eyesore, but I think it's an important part of town history, reminding us of the days when the town's main business was farming. I'll be sad when it's torn down. 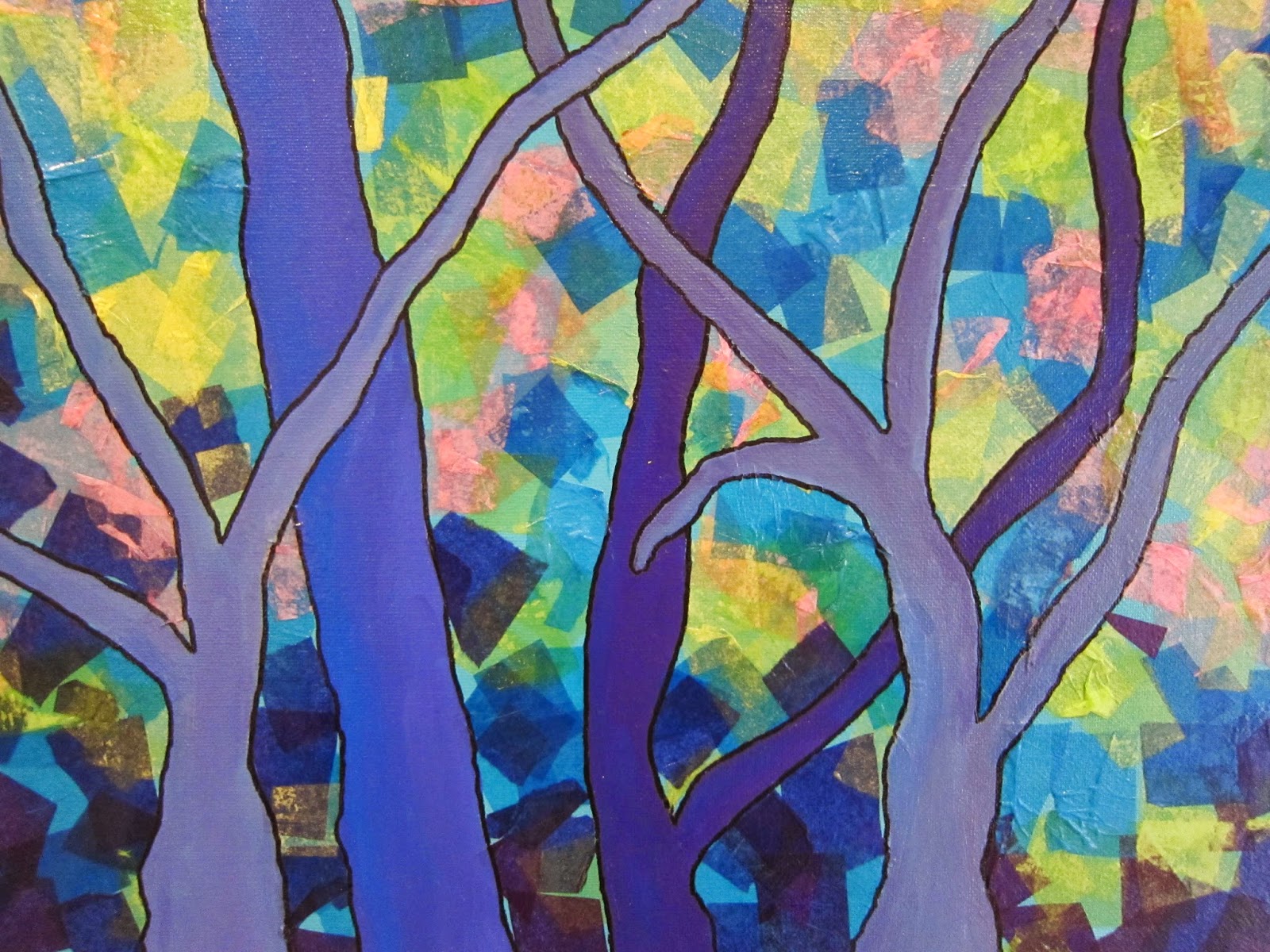 12"x16" My instructor showed us a picture of a tangle of trunks, branches and twigs and said "Interpret this any way you want". This is tissue paper, acrylic and Sharpie. I think it needs more... maybe some smaller branches? 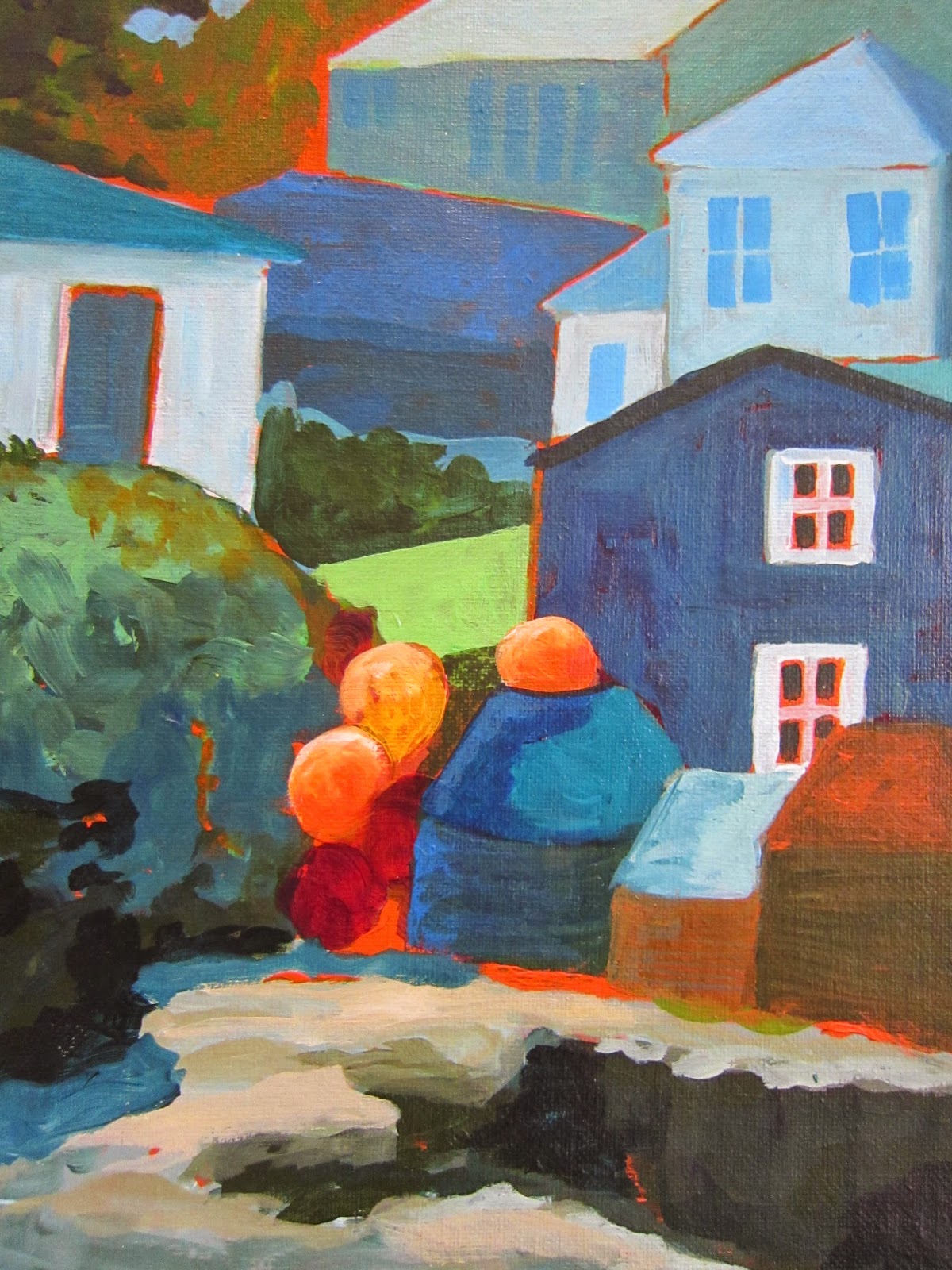 9"x12" A view of the little community of Selvage on the east coast of Newfoundland, although a Selvage resident may not recognise it! Those cone shapes are supposed to be piles of crab traps. This was a sketch done in preparation for the bigger painting below. As you can tell, I like bright colours. 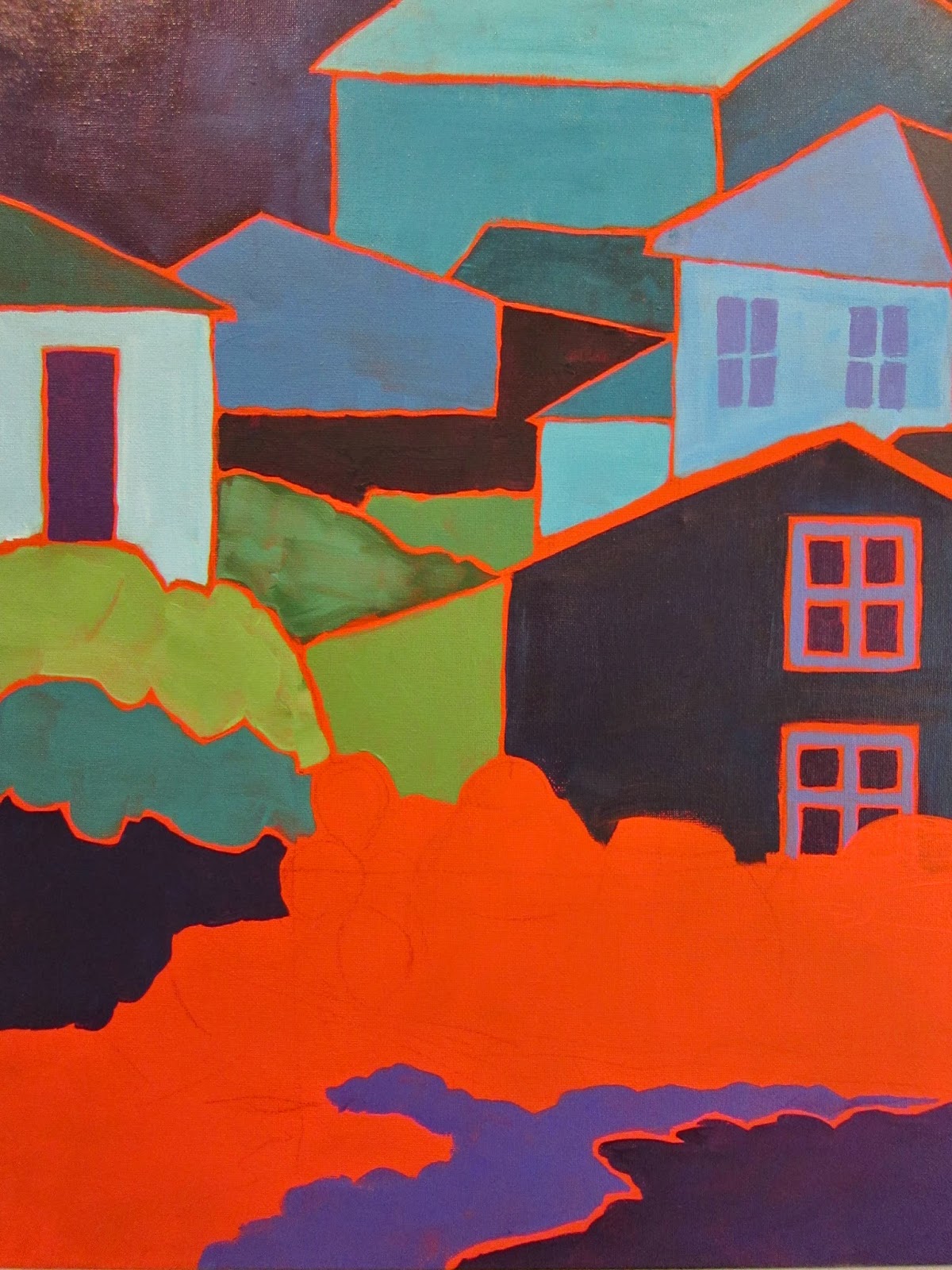 16"x20" Definitely not finished yet, still a lot of work left to do. And the colours have not really photographed well. I keep doing a little bit, then stepping away and thinking about it. Still not sure if I like it, and not quite sure where this painting is going.
Posted by Shammickite at 11:32 10 comments:

These two bronzes commemorate the famous dog breeds of Newfoundland and Labrador....  the Labrador Retriever and the Newfoundland Dog. The 1.5 scale sculptures were created in cast bronze over a stainless steel frame by Luben Boykov in 2003. 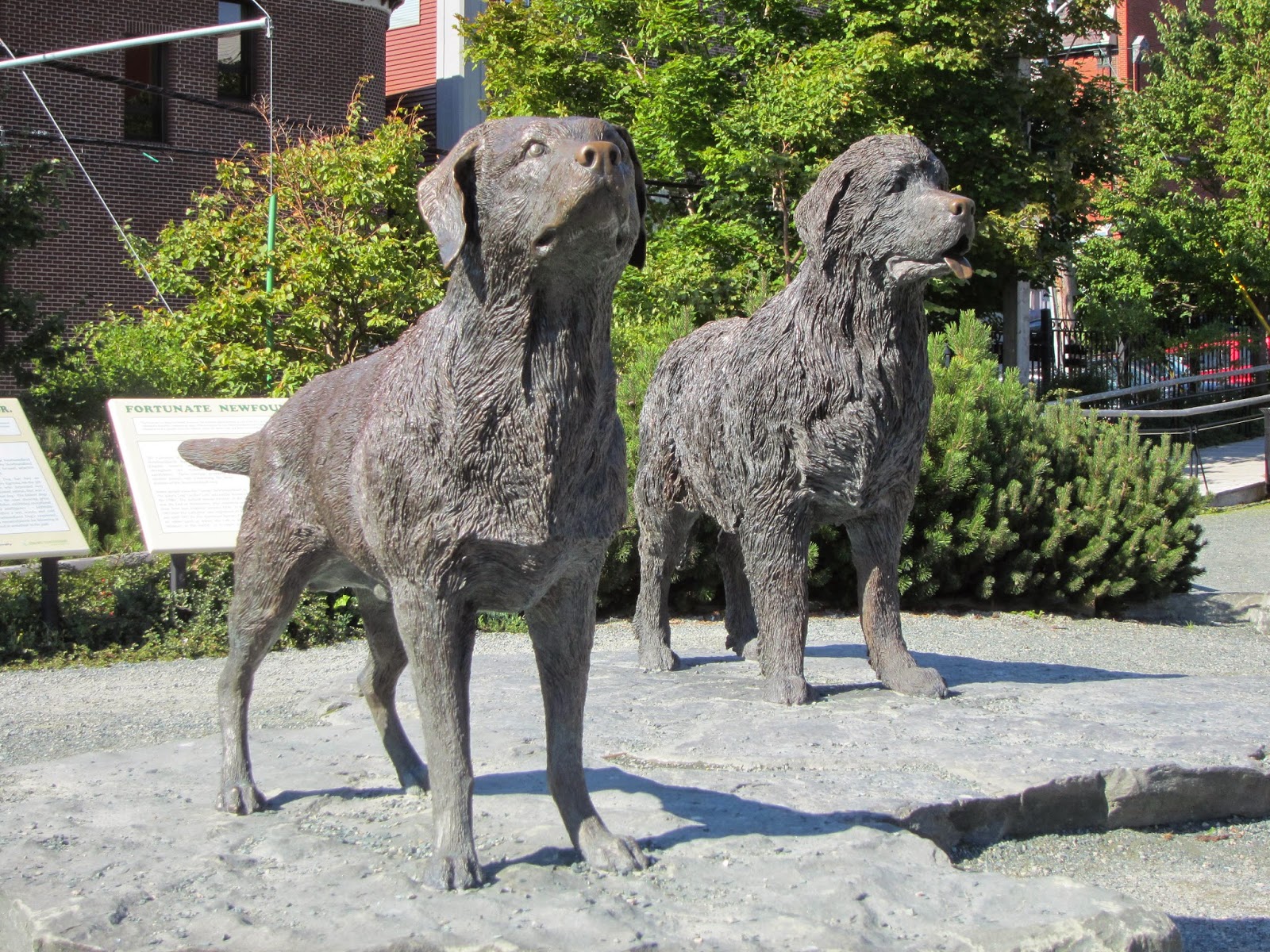 These dogs stand in Harbourside Park in St Johns, and whenever I'm there, I have to visit them and rub their noses for luck. A second set of these doggy sculptures was completed by Boykov in 2008 and stand halfway up Signal Hill outside the Geo Centre. 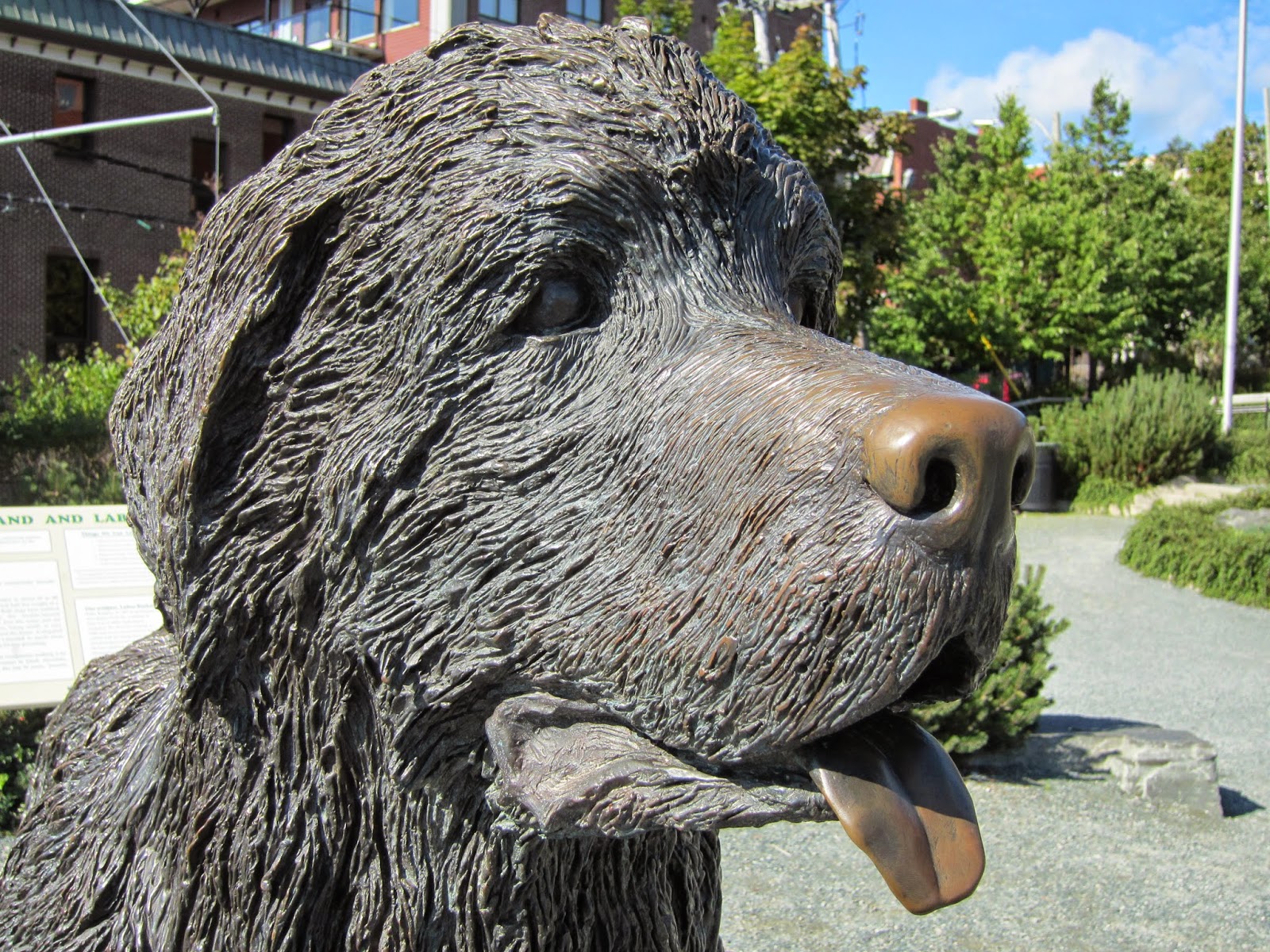 The Newfoundlands ('Newfs' or 'Newfies') have webbed feet and a water-resistant coat and were originally bred and used as a working dog for fishermen.  Newfoundland dogs excel at water rescue and lifesaving because of their muscular build, thick double coat, webbed feet, and innate swimming abilities. 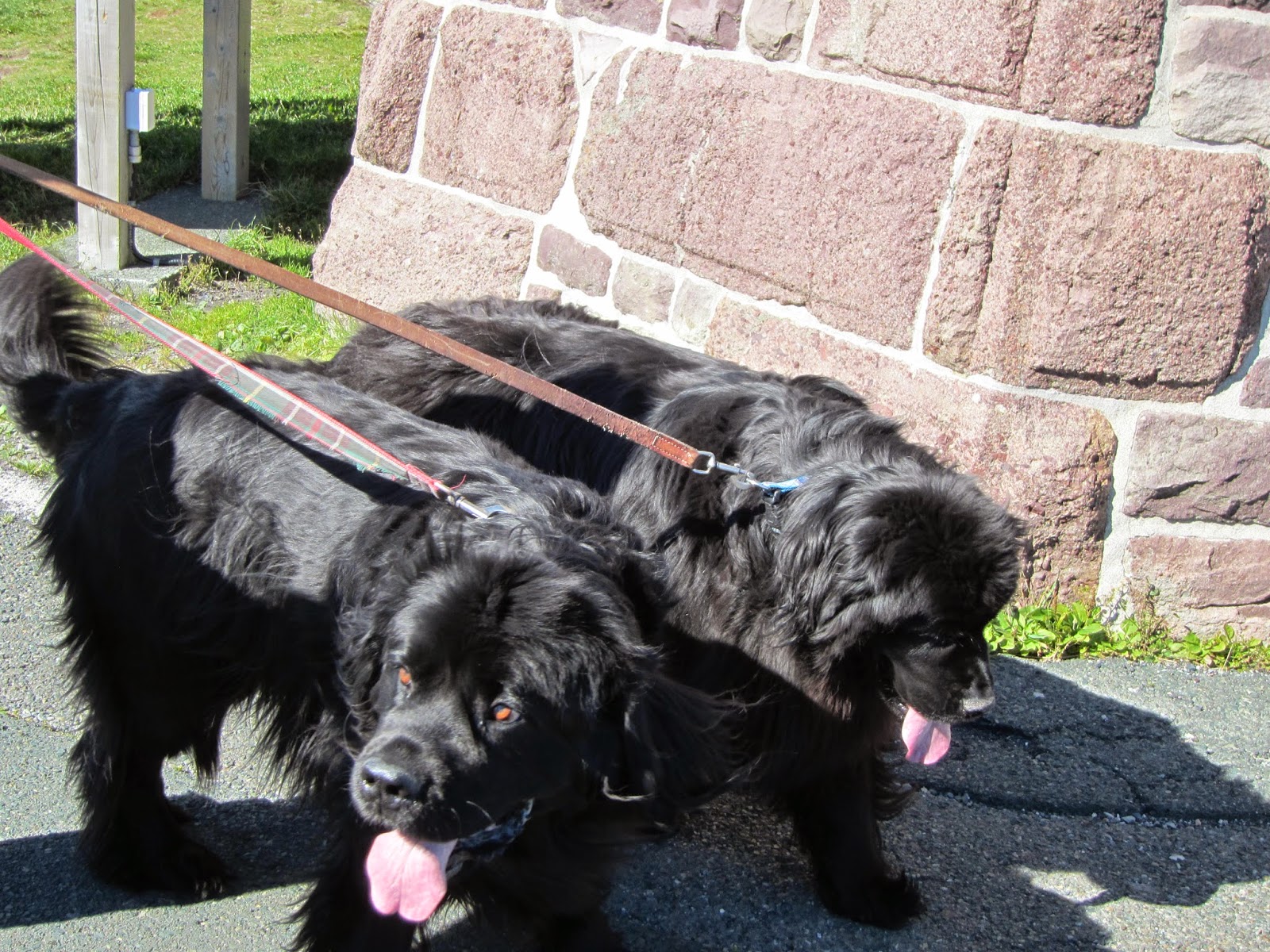 But there's nothing better than the real thing..... these two sisters were taking their person for a walk on Signal Hill when I met them.  Their names are Jib and Mercedes. 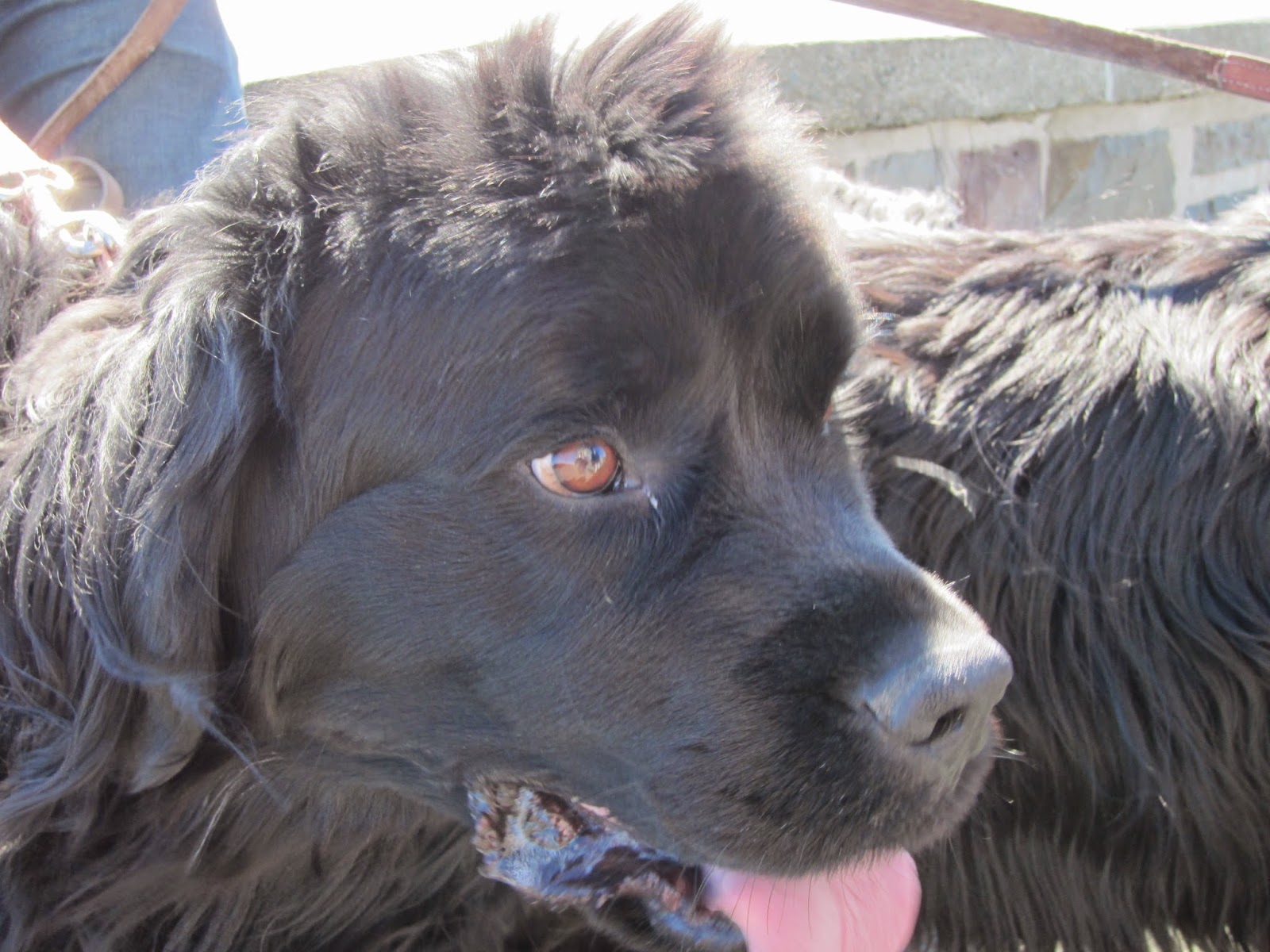 Jib and Mercedes are well known characters in St Johns, as they greet all the cruise ships that arrive in the harbour. Friendly, soft to touch, lovely creatures, just as long as you don't mind lots of drool!
Posted by Shammickite at 08:54 10 comments:

Back to the Rock

A few more views of the coastal communities of Newfoundland. And of course, Newfoundland is a rocky island surrounded by the cold waters of the Atlantic Ocean, so there's a lot of rugged coastline to photograph. 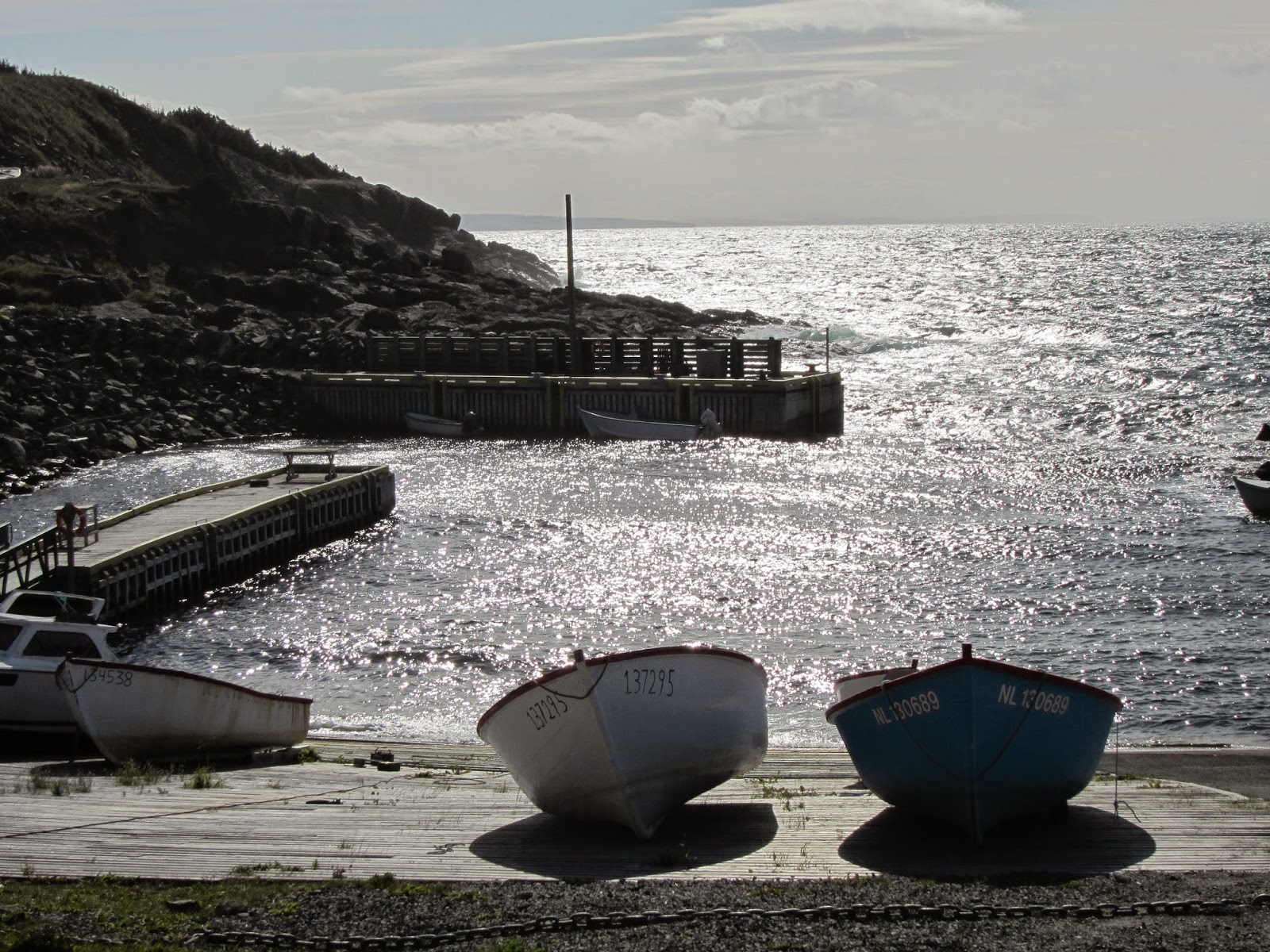 The landing stage at the community of Bauline, just to the north of St Johns. It was a sunny day, but really windy, with the sun sparkling on the choppy waves. 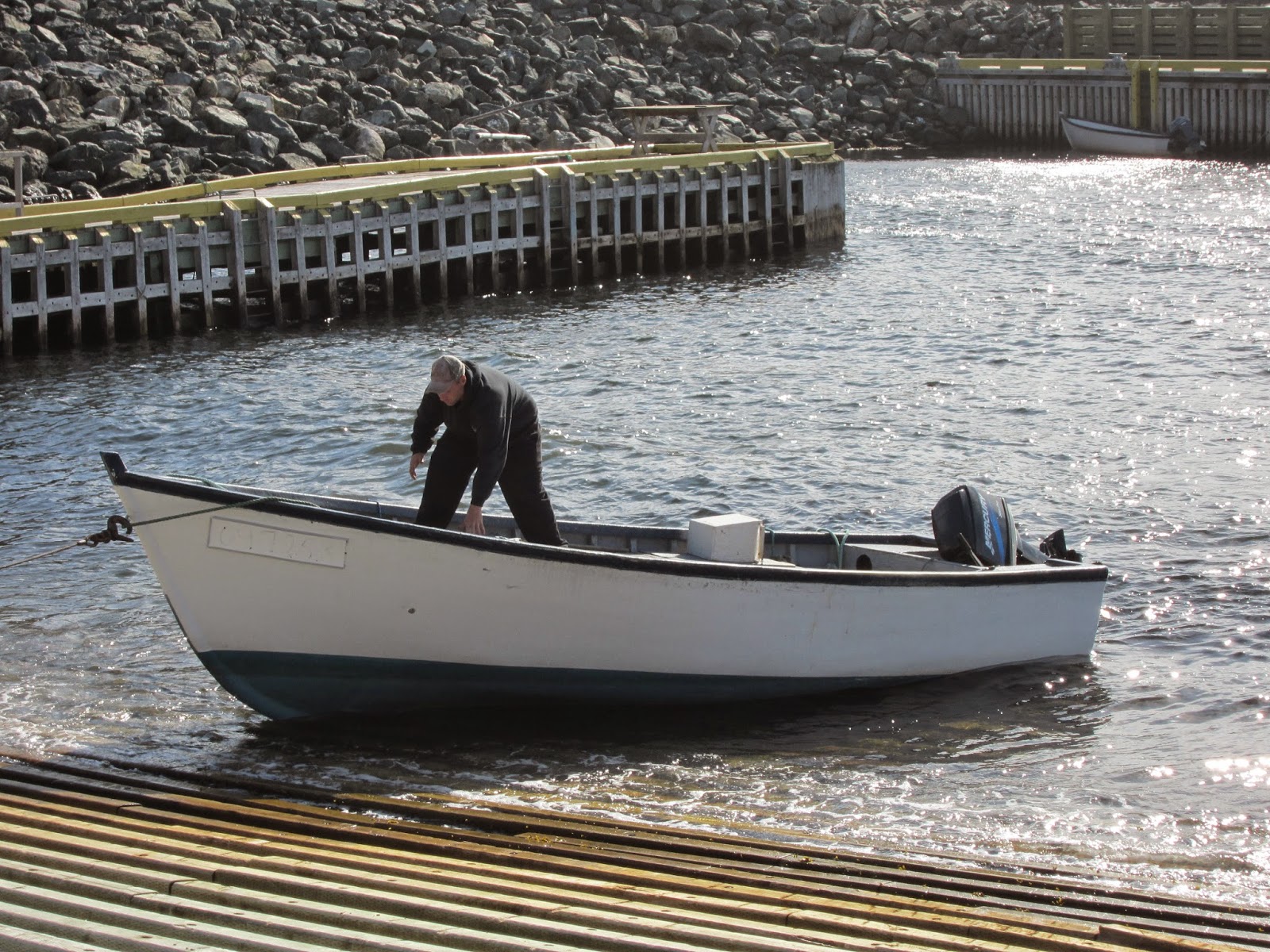 Bringing the fishing boat on shore for the night, away from the dangers of the waves. 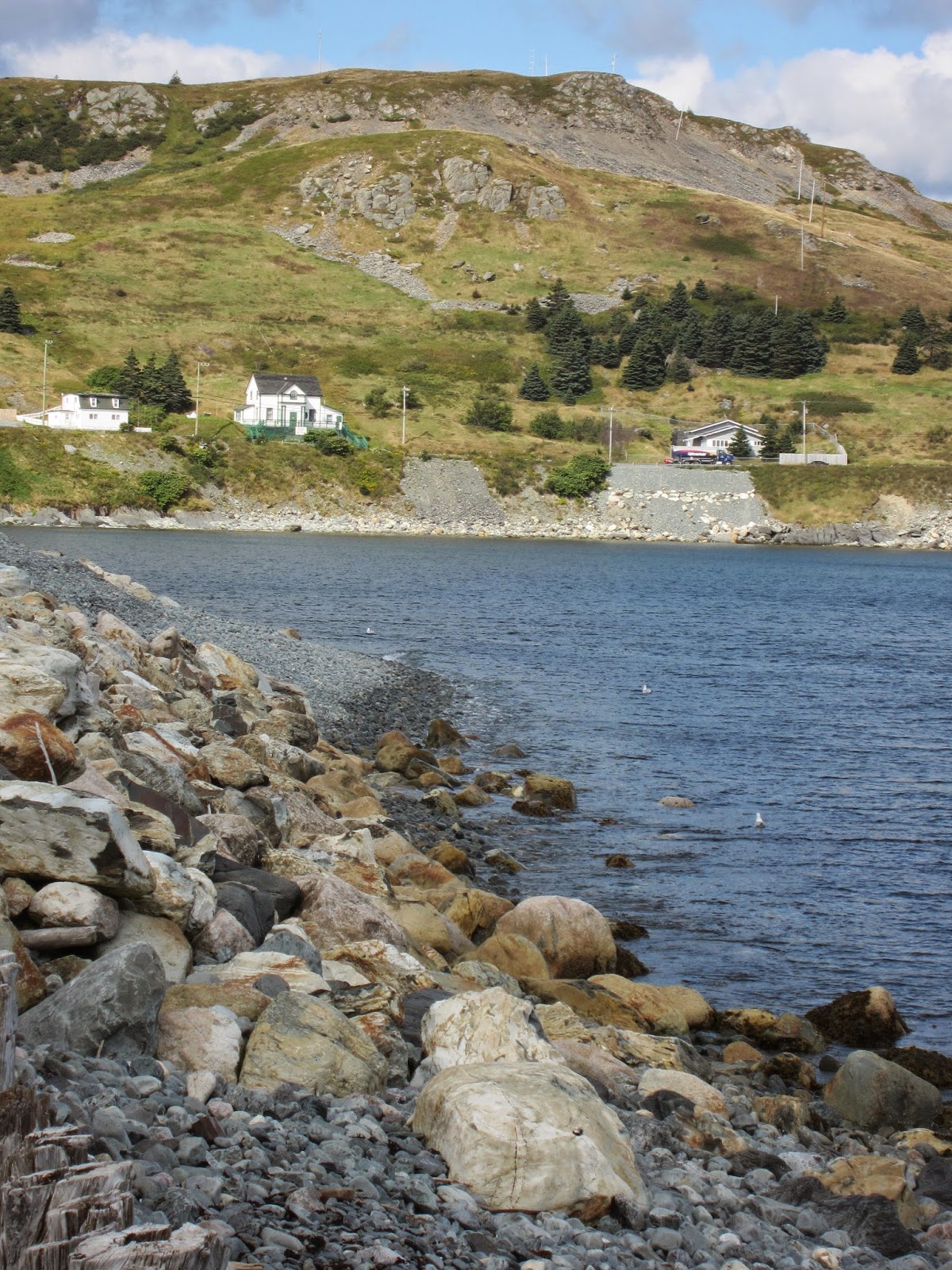 Ferryland on the Southern Shore. There's been an archeological dig going on here for over twenty summers, uncovering one of the first attempts to build a settlement in Newfoundland. George Calvert, better known as Lord Baltimore, landed here in 1621 and founded the Colony of Avalon, close to rich fishing grounds. But Lady Baltimore wasn't happy.... it was cold, life in the colony was hard, and the Baltimore's moved south to found another colony in Maryland, which grew into the city of.... yes, you guessed it...  Baltimore. 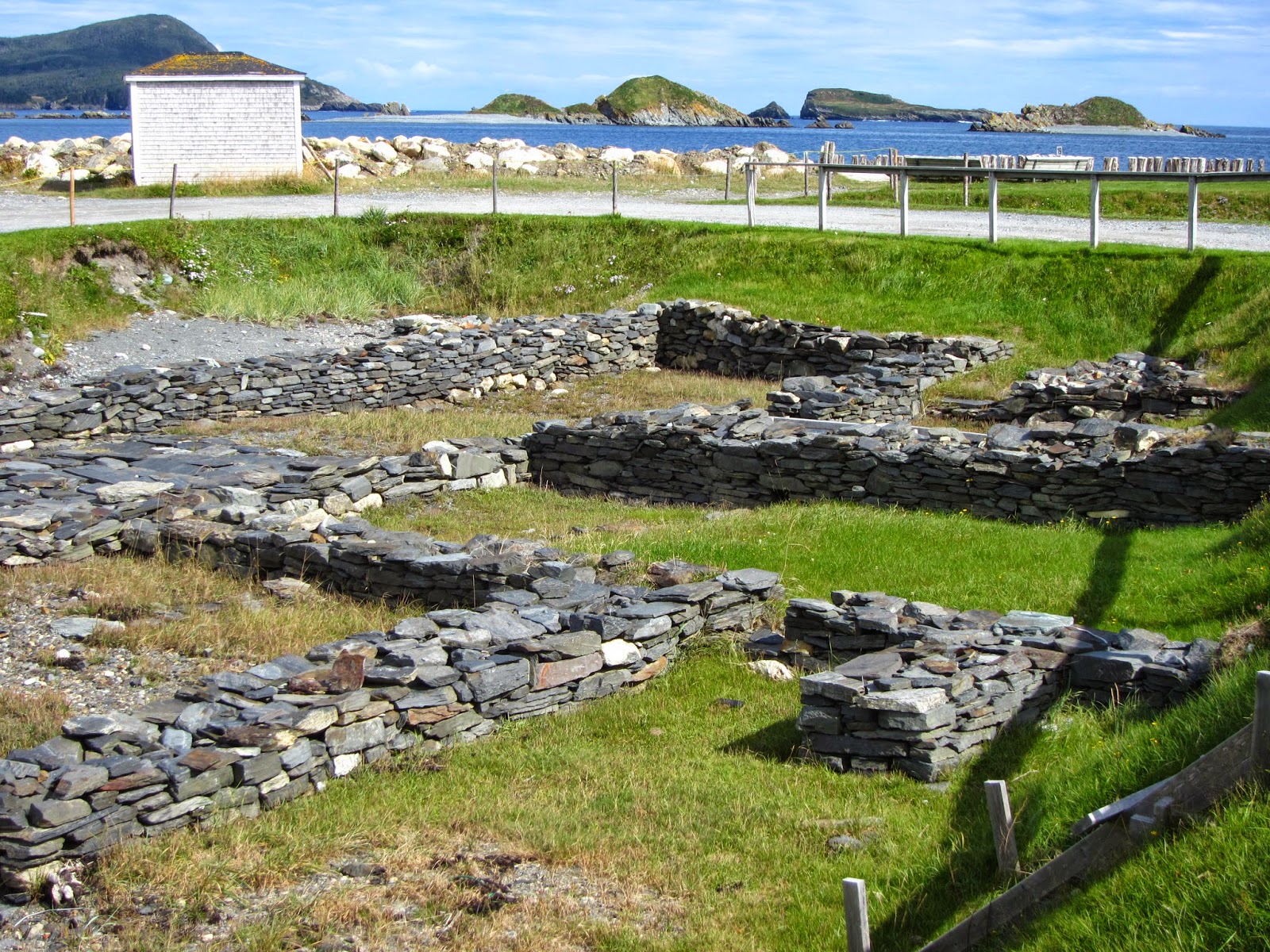 Some of the foundations of the harbour and the walls of the houses and the cobblestone streets built in the 17th Century as the Colony of Avalon. When I first visited Ferryland in 1996, most of the site consisted of private houses and gardens which have now been purchased and removed, and the actual excavations are revealing a large settlement. An Interpretation Centre has been built where you can view all the finds... fascinating stuff! 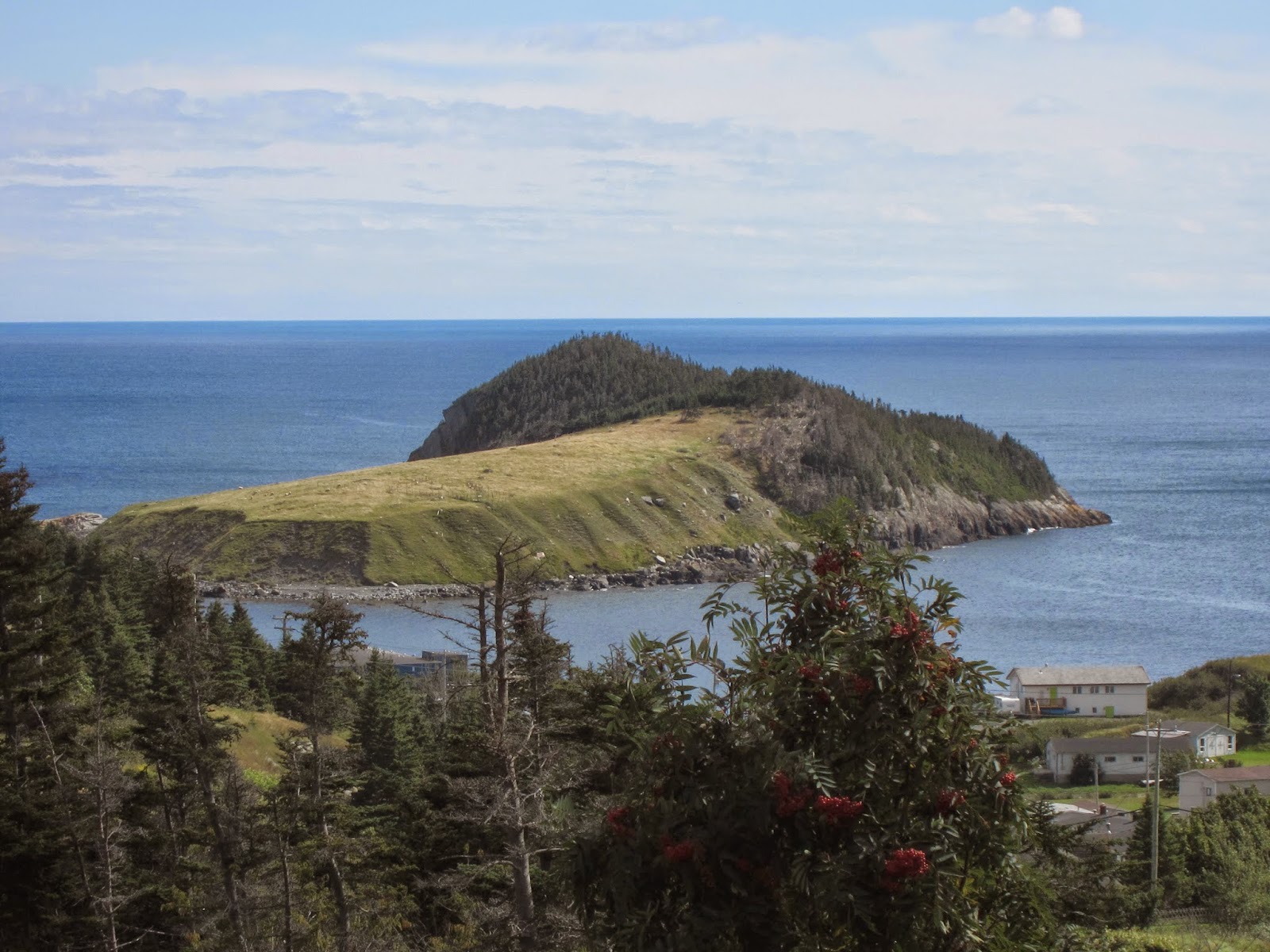 Look closely and you'll see tiny white dots on this island. Sheep! The flock is ferried to the island in the spring and spends the summer grazing on the grasses, before being brought back to the mainland in the fall. No fences, no predators. And sheep hate swimming! 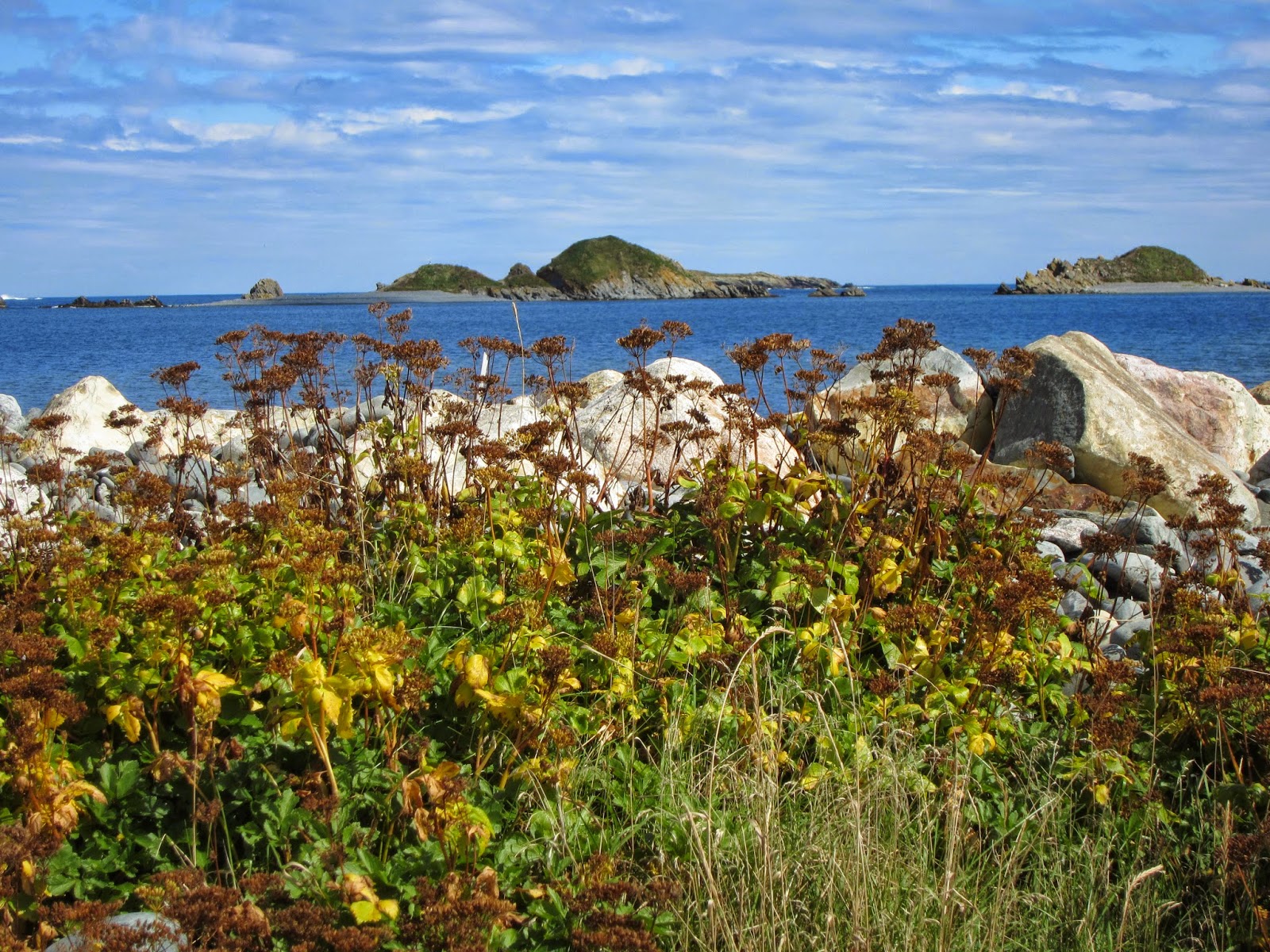 A perfect day by the ocean. No wonder I love visiting Newfoundland when I see views like this.
Posted by Shammickite at 08:50 9 comments: 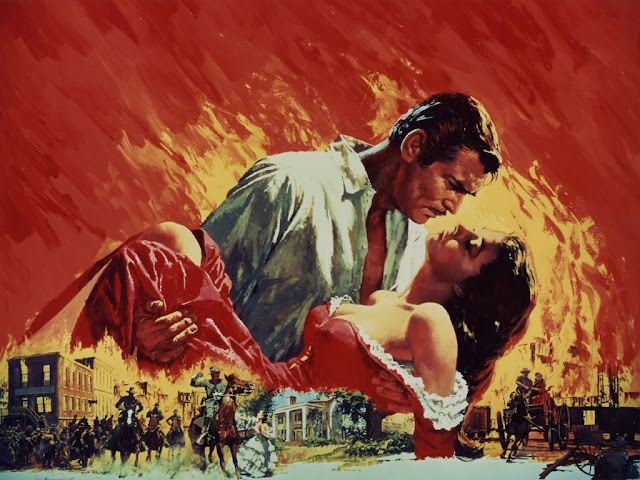 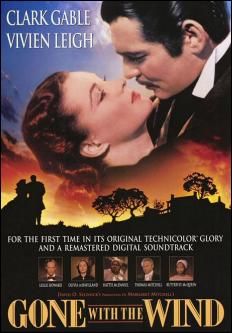 It was the first day of the recreational groundfish fishery, which is a limited length of time when the public can fish for their own use, with a daily bag limit of five groundfish per day (including cod) and a maximum boat limit of 15 fish when three or more people are fishing.
Inshore commercial cod fishery is still under a moratorium, to increase the cod stocks after years of overfishing. 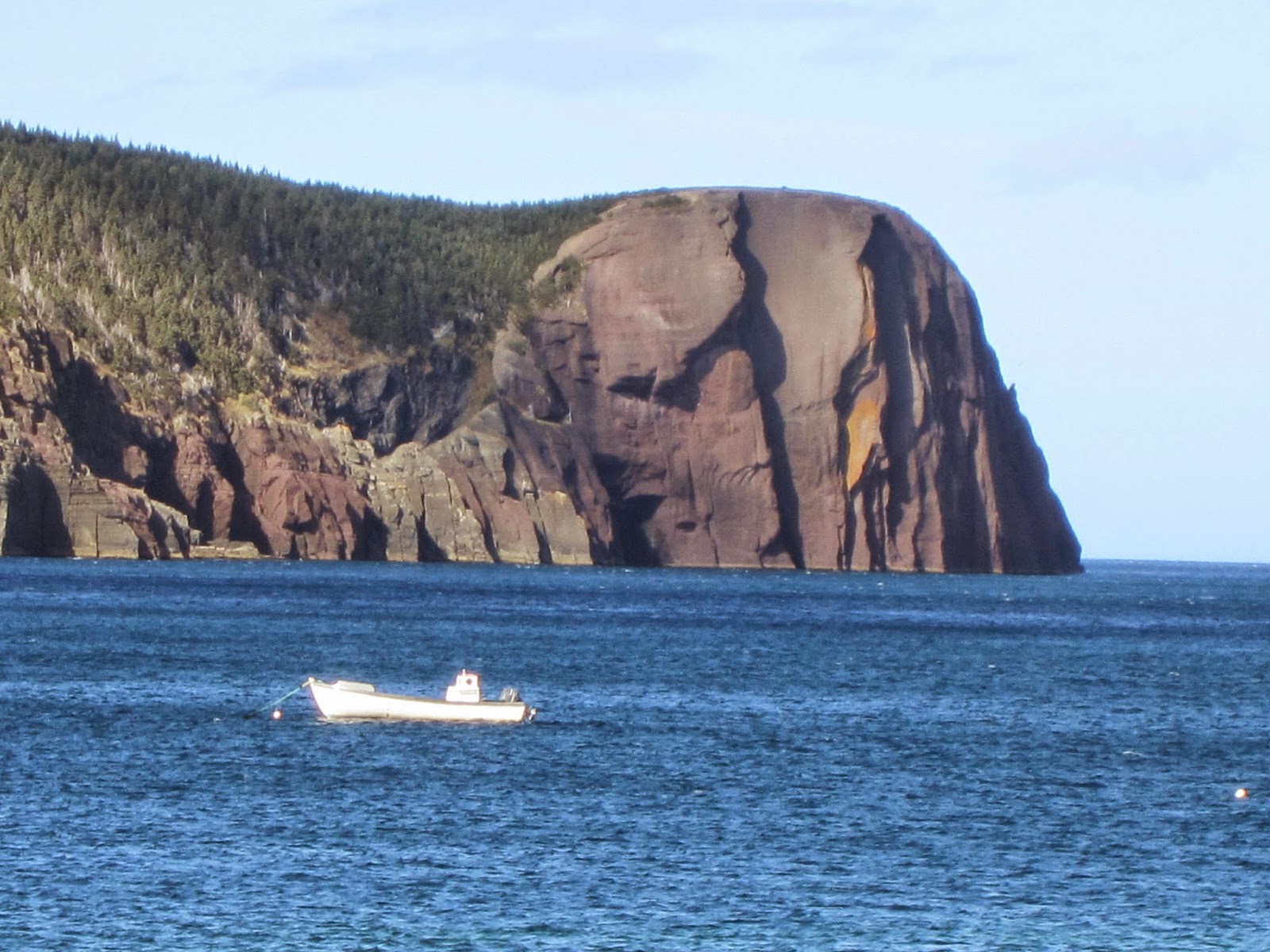 It was a rare sunny day,  so we took a trip to the community of Flatrock, just north of St Johns. Flatrock is a pretty little village, with yes, you guessed it.... a lot of flat rocks, although the rock in this picture doesn't look very flat! You can read Flatrock's colourful history here. 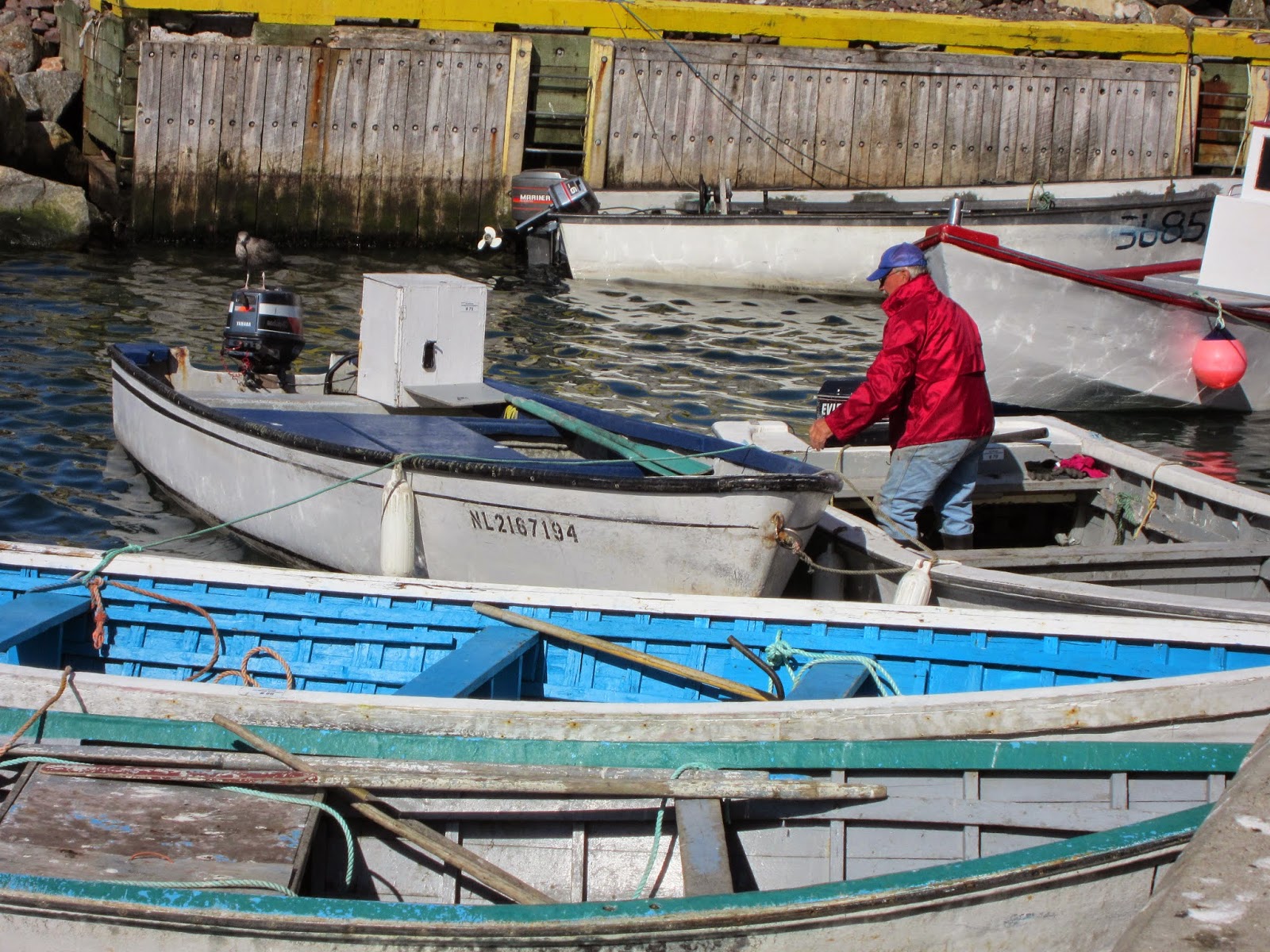 This gentleman was planning to go out and catch a few fish for supper, so he spent about 20 minutes preparing his boat and getting his fishing lines ready. 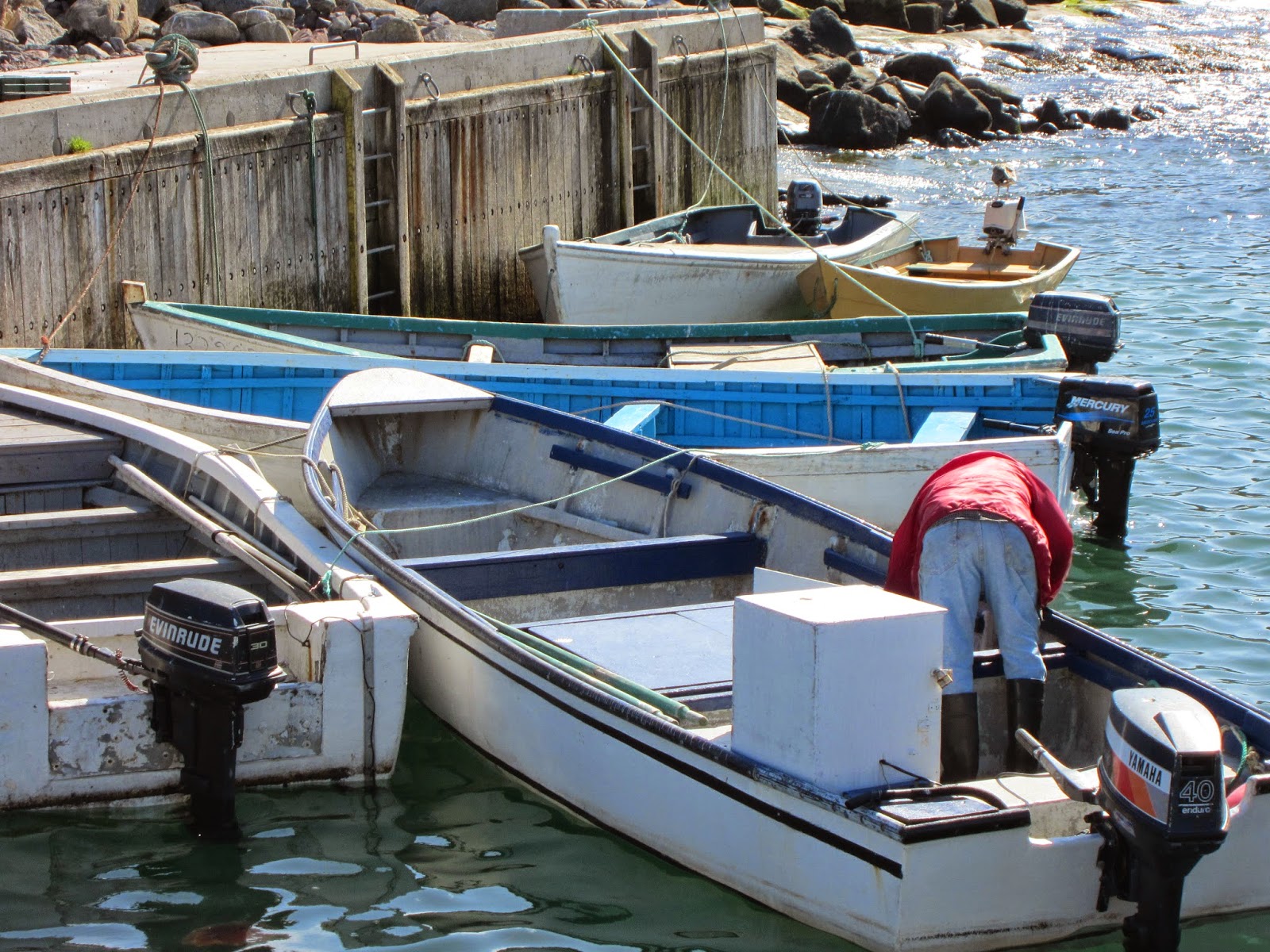 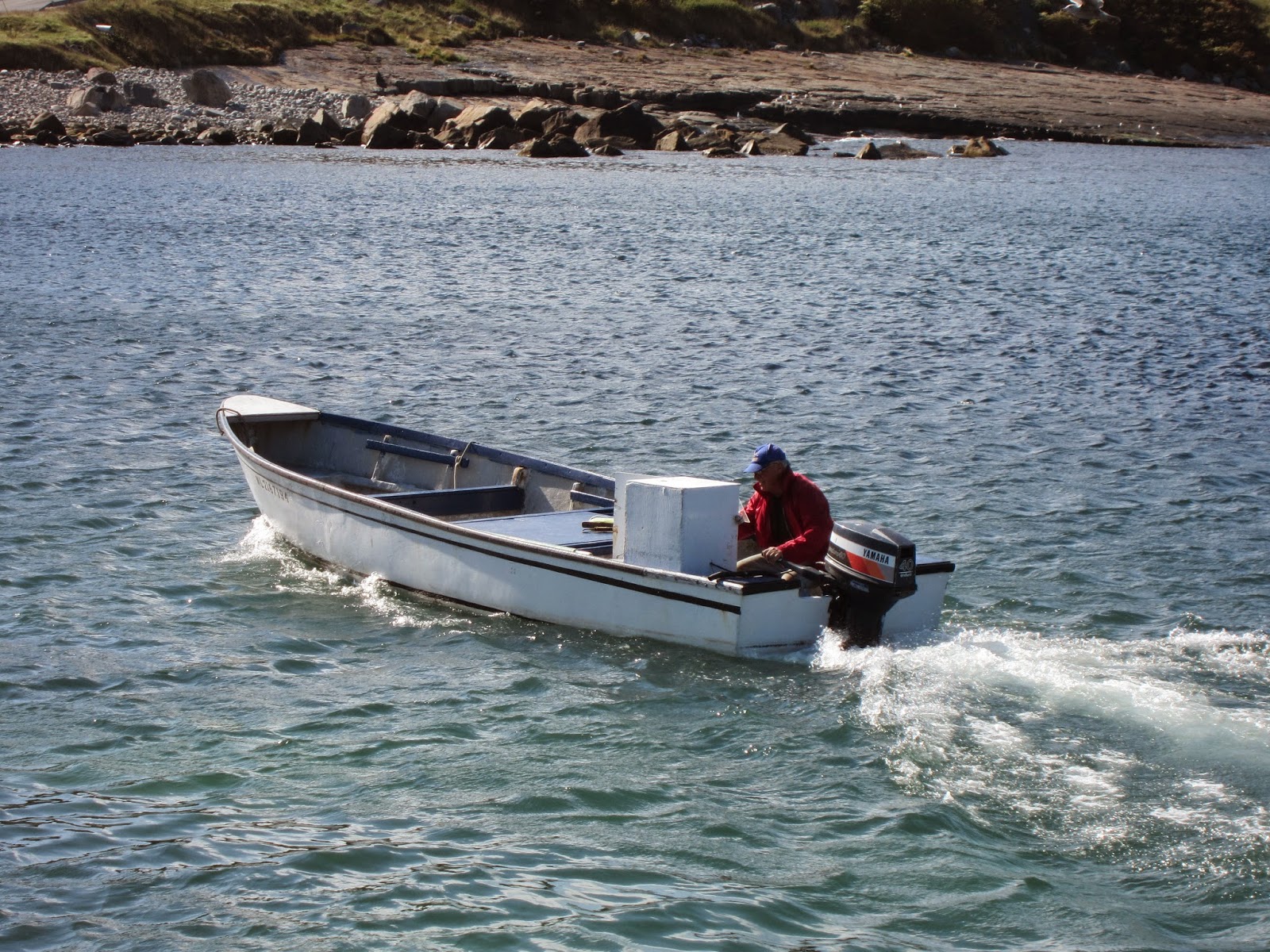 Off he goes, out into the harbour. I wished him good luck. Nothing like fresh fish straight out of the ocean for a tasty supper.

More pictures of Newfoundland to come.
Posted by Shammickite at 09:47 6 comments: