A couple of weeks ago I wrote about an elegant 200 year old American Elm that was threatened by the proposed expansion of a train and bus station in 2020.
Good news!
A local geography teacher thought that his Grade 8 class would be interested in getting involved. After much discussion in the classroom, the students wrote letters to Metrolinx (who will be designing the station) and the local Member of Parliament to try and save the tree.
And they were not the only letter writers. Many students from other schools and members of the public were asking for the tree to be spared from the chainsaws. It seems the outpouring of mail has had the desired effect, and Metrolinx has announced that the station site is being redesigned around the tree.
Hooray! 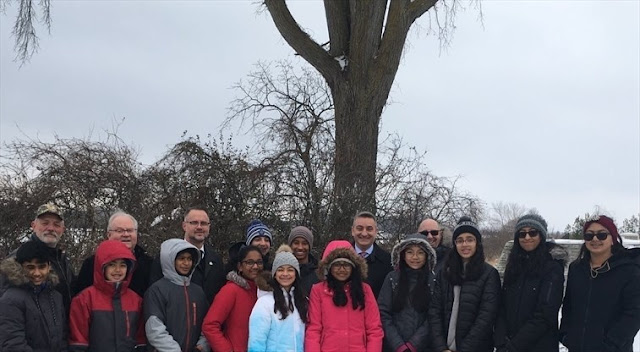 Some of the students and the local Mayor and Councillors and the Member of Parliament at the announcement. I think the tree is breathing a sigh of relief!
Posted by Shammickite at 19:39 11 comments: