Fine Dining on The Rock

If you are lucky enough to take a trip to Newfoundland, you have a taste treat coming to you.  Some of these traditional foods are definitely an acquired taste..... so I'm not actually recommending them.... just saying.... 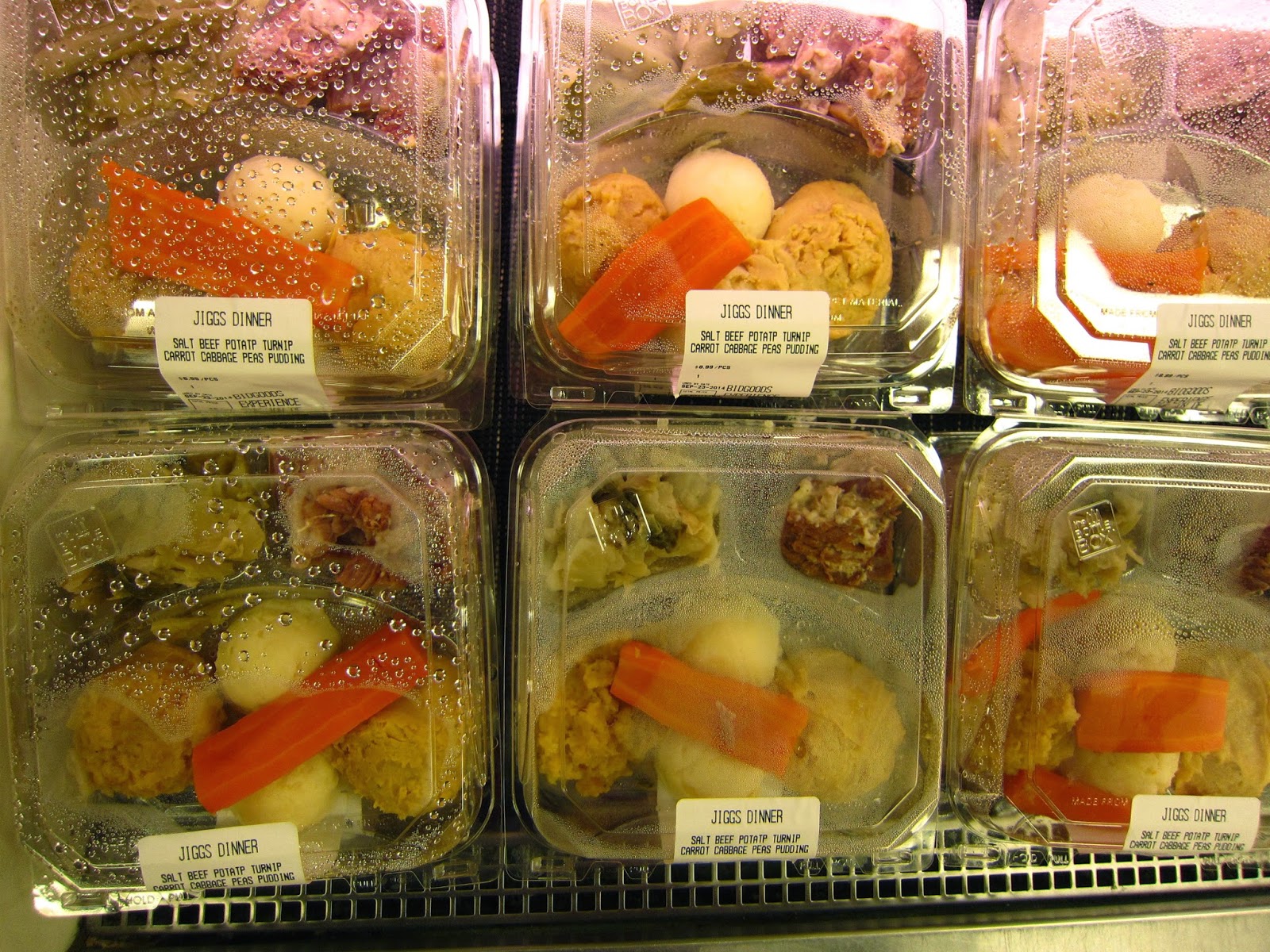 Traditional Jiggs Dinner. Consists of salt beef, potato, turnip, carrot, cabbage, and peas pudding. A few years ago, OlderSon and I went to a Sunday Jiggs Dinner at the Irving gas station cafe in the Donovan's Industrial Estate. A gas station restaurant doesn't sound like the perfect location for fine dining, but there were people lined up outside for their Jiggs Dinner, and very good it was too! As they say in Newfoundland, some fine scoff, b'y! 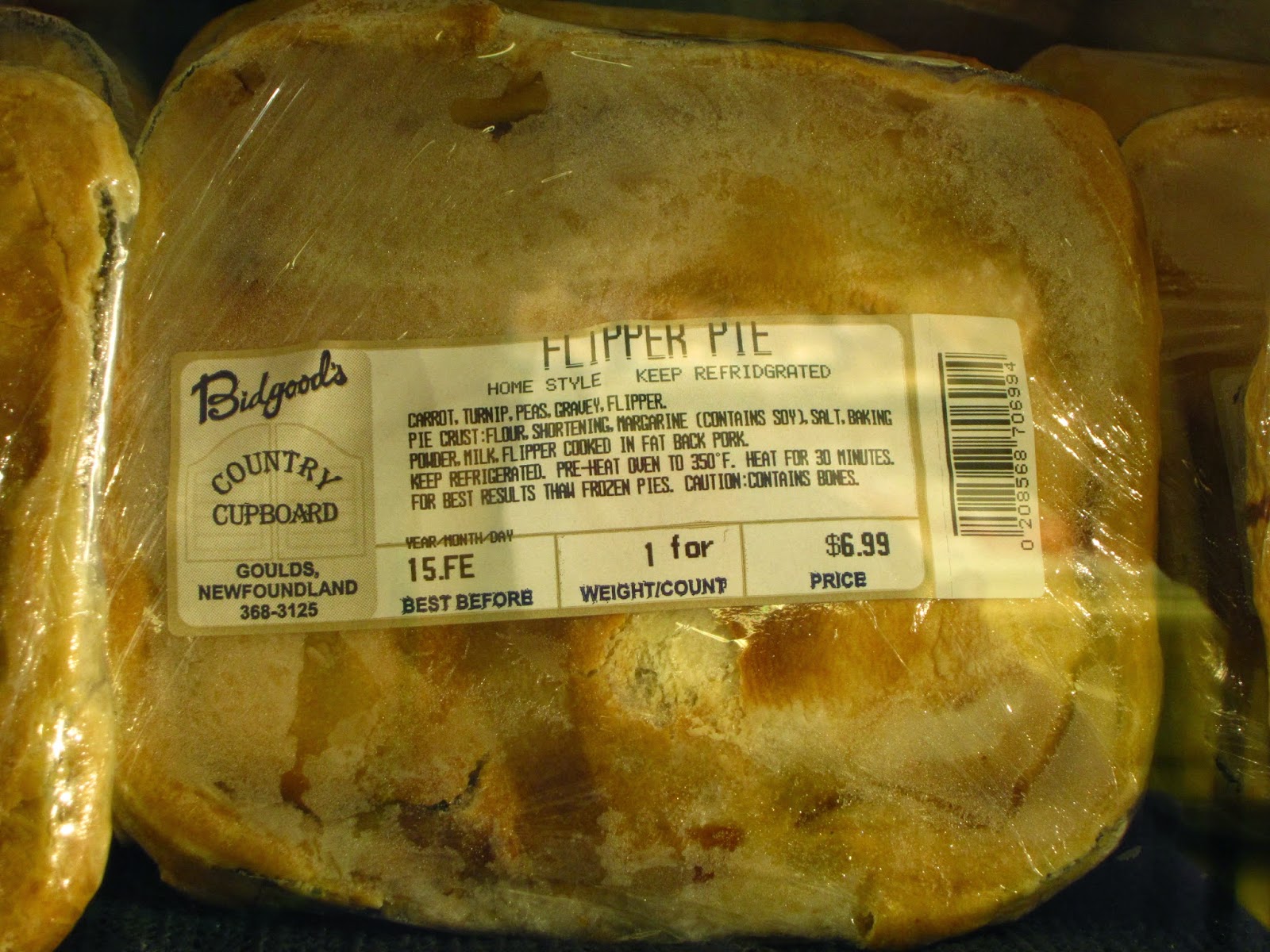 Seal Flipper Pie. I haven't actually sampled a seal flipper pie, but maybe one day, when I get very very brave. Or very very hungry. I think it would taste really fishy. 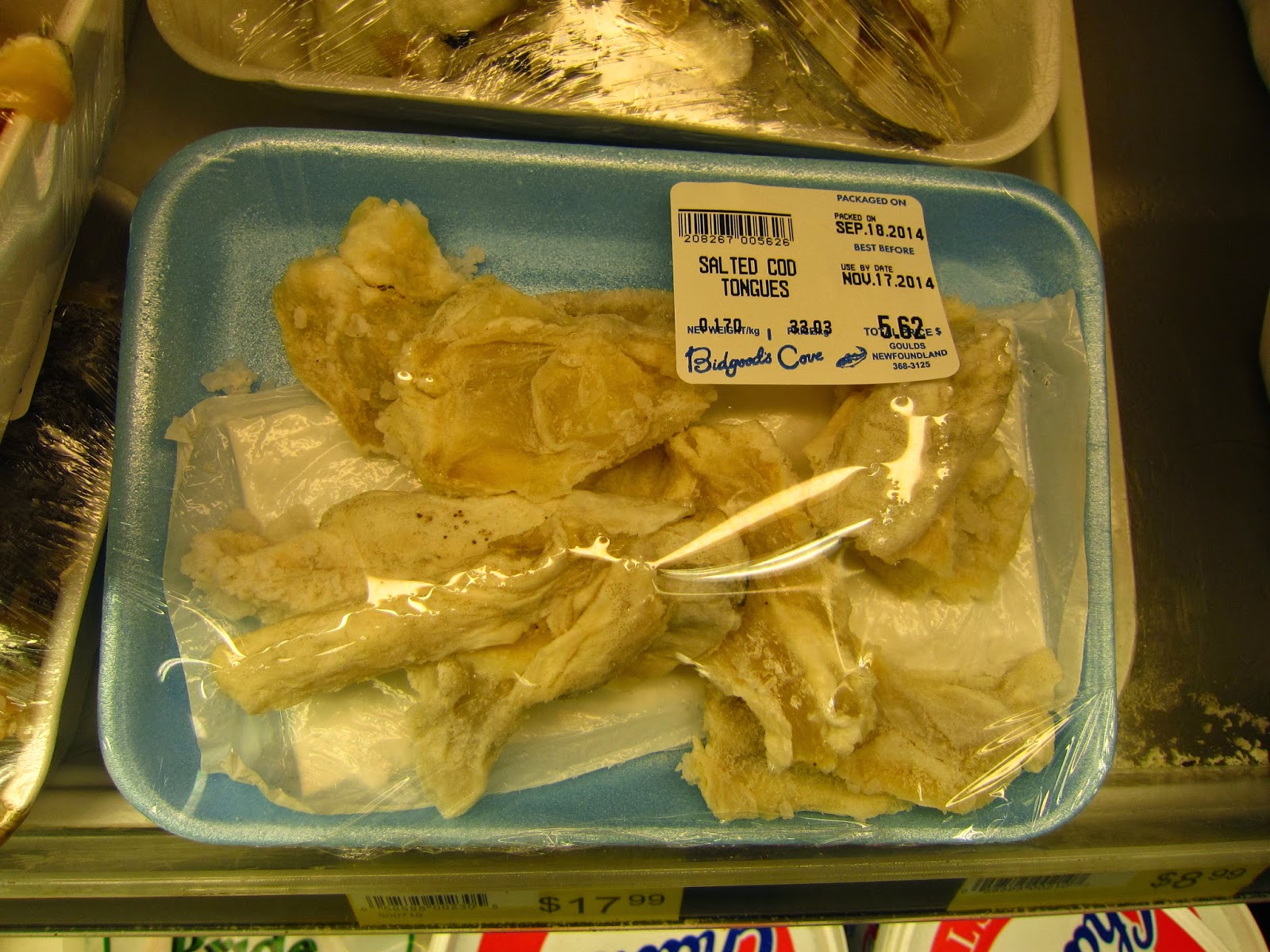 Cod Tongues. These are not actually tongues, but are a small muscle from the neck of the cod. Usually breaded, then fried in pork fat with cubes of salt pork. I've eaten them..... but once was enough. 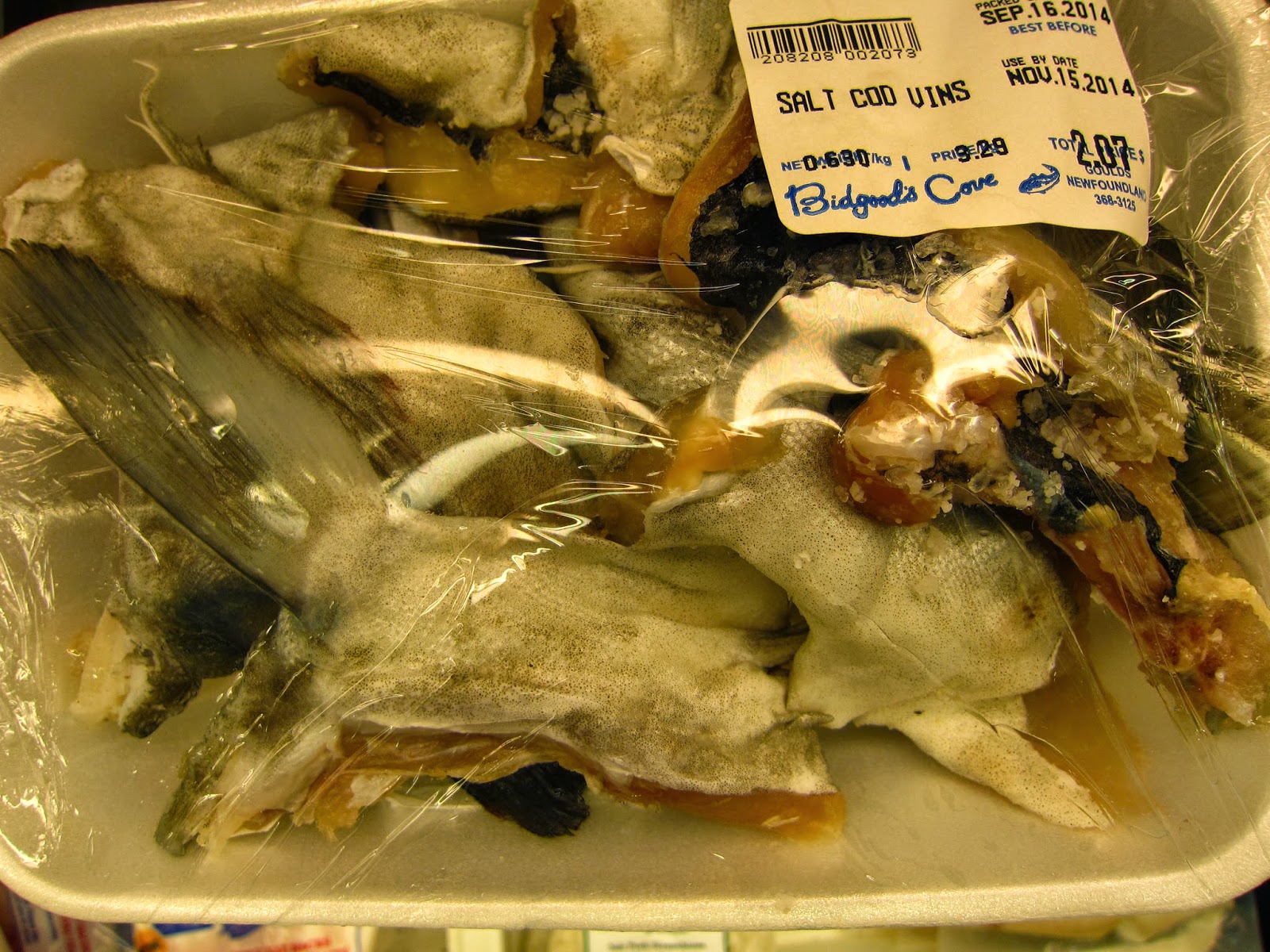 Salt Cod Vins. I have to admit I don't have a clue what this is, or how it is cooked. It looks like fins and tails and bits of cartilage, all the leftover bits after preparing the cods tongues and the flipper pie. Maybe for soup? I think I'll pass on this one. 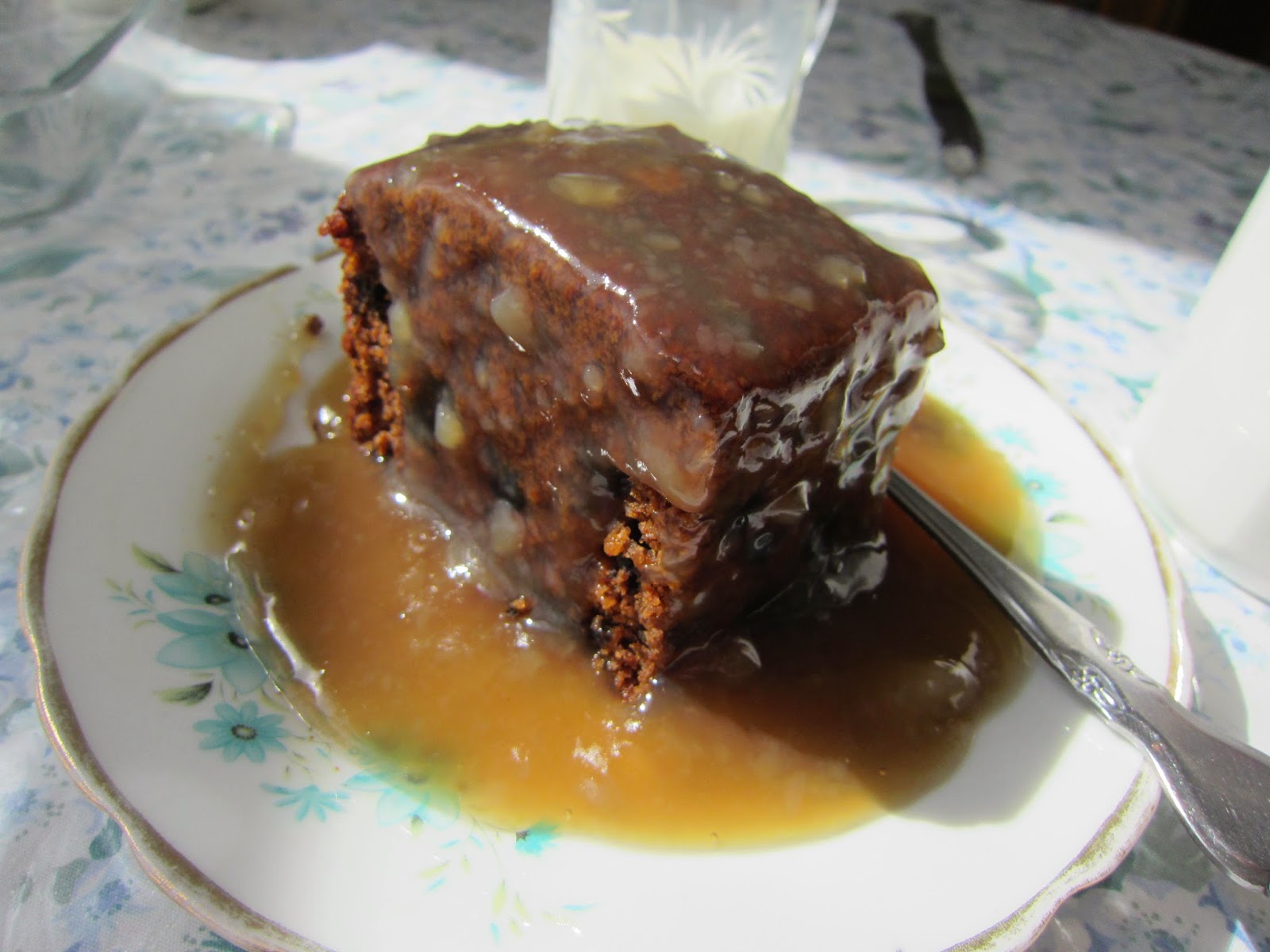 Ginger blueberry cake with brown sugar sauce. Now this looks a lot nicer. This was dessert when we stopped for lunch in Brigus. Highly recommended! 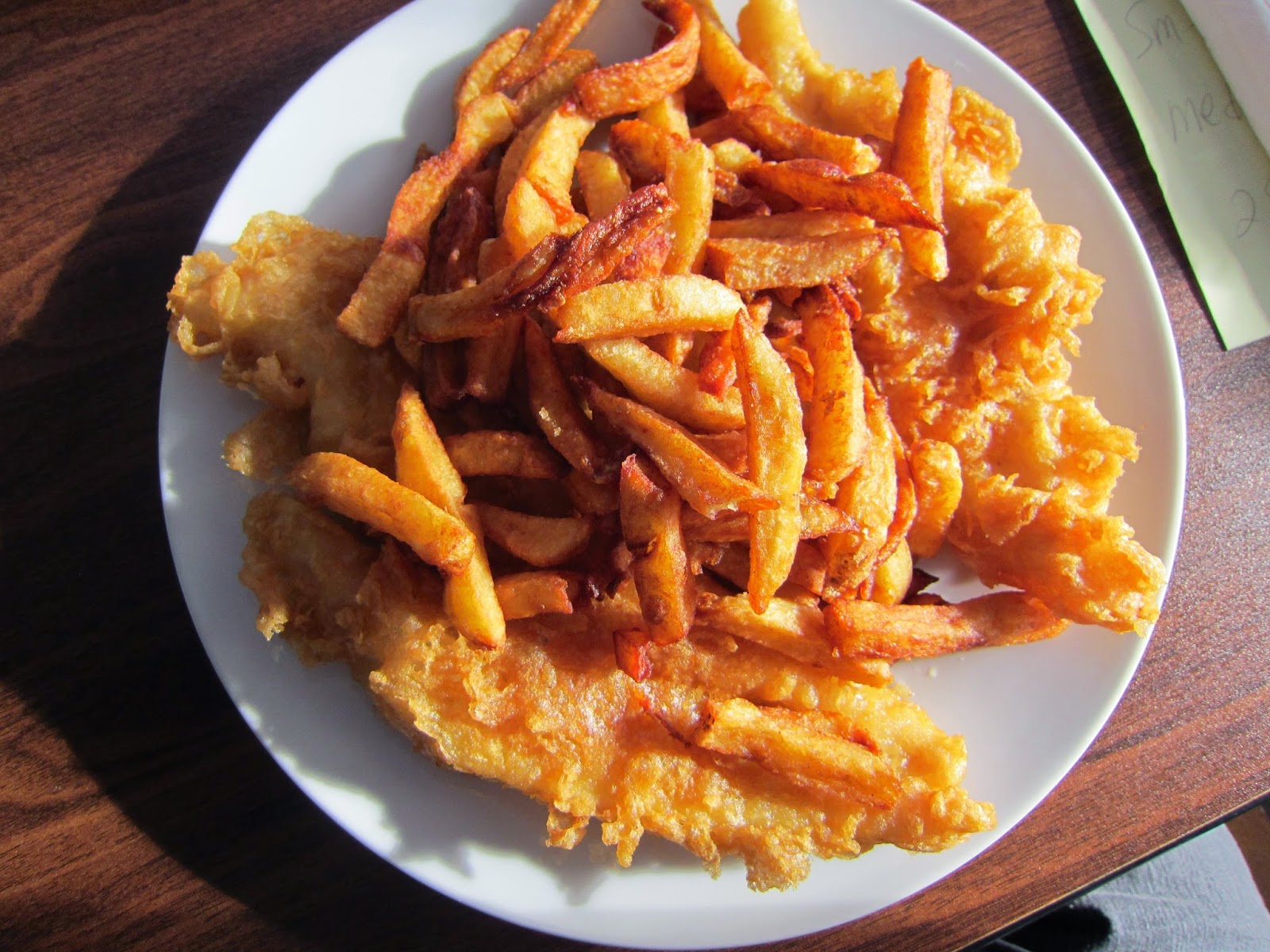 And now the dish that Newfoundland does best.... Cod and chips, the fish straight from the ocean. We went into the little restaurant on the harbour at St. Philips just to get a coffee, but the aroma of fish'n'chips proved too much to bear, so we stayed for supper.  Delightful.... especially with this view of Conception Bay from our table. 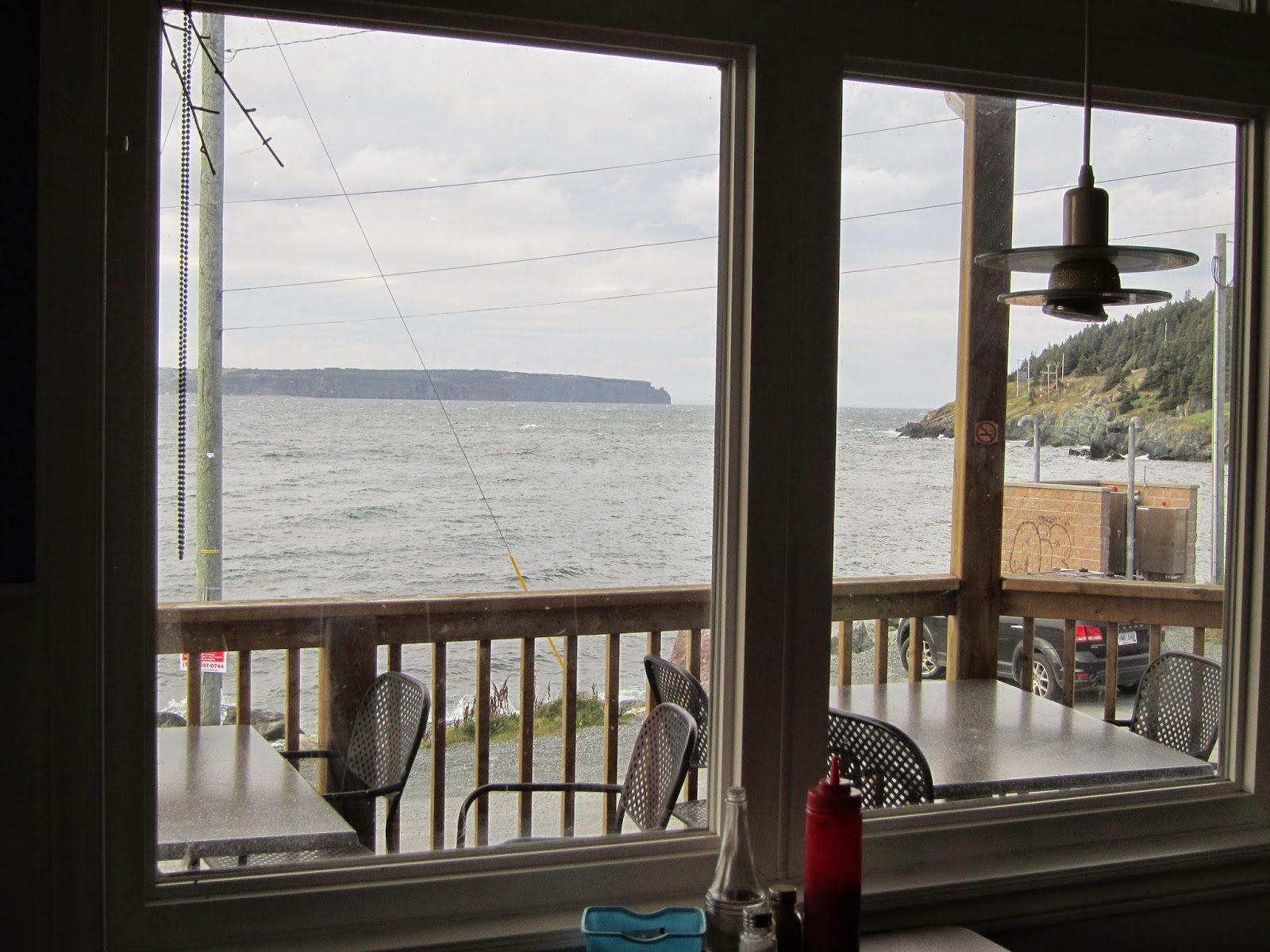 More pictures of Newfoundland to come.

The City of St. John's was incorporated in 1921, but it's one of the oldest settlements in North America.  St. John's got its name when Venetian explorer John Cabot (or Giovanni Caboto to give him his proper name) sailed into the harbour in the morning of June 24, 1494, the feast day of John the Baptist. English fishermen crossed the Atlantic to fish in these waters throughout the 1500s, and a permanent colony was established in the 1630s.

The Cabot Tower is a landmark in St. John's, standing high on Signal Hill at the entrance to the harbour. Construction of this stone tower began in 1898 and completed in 1900. In 1901, Guglielmo Marconi received the first trans-Atlantic wireless message here, and a ham radio station operates there today. 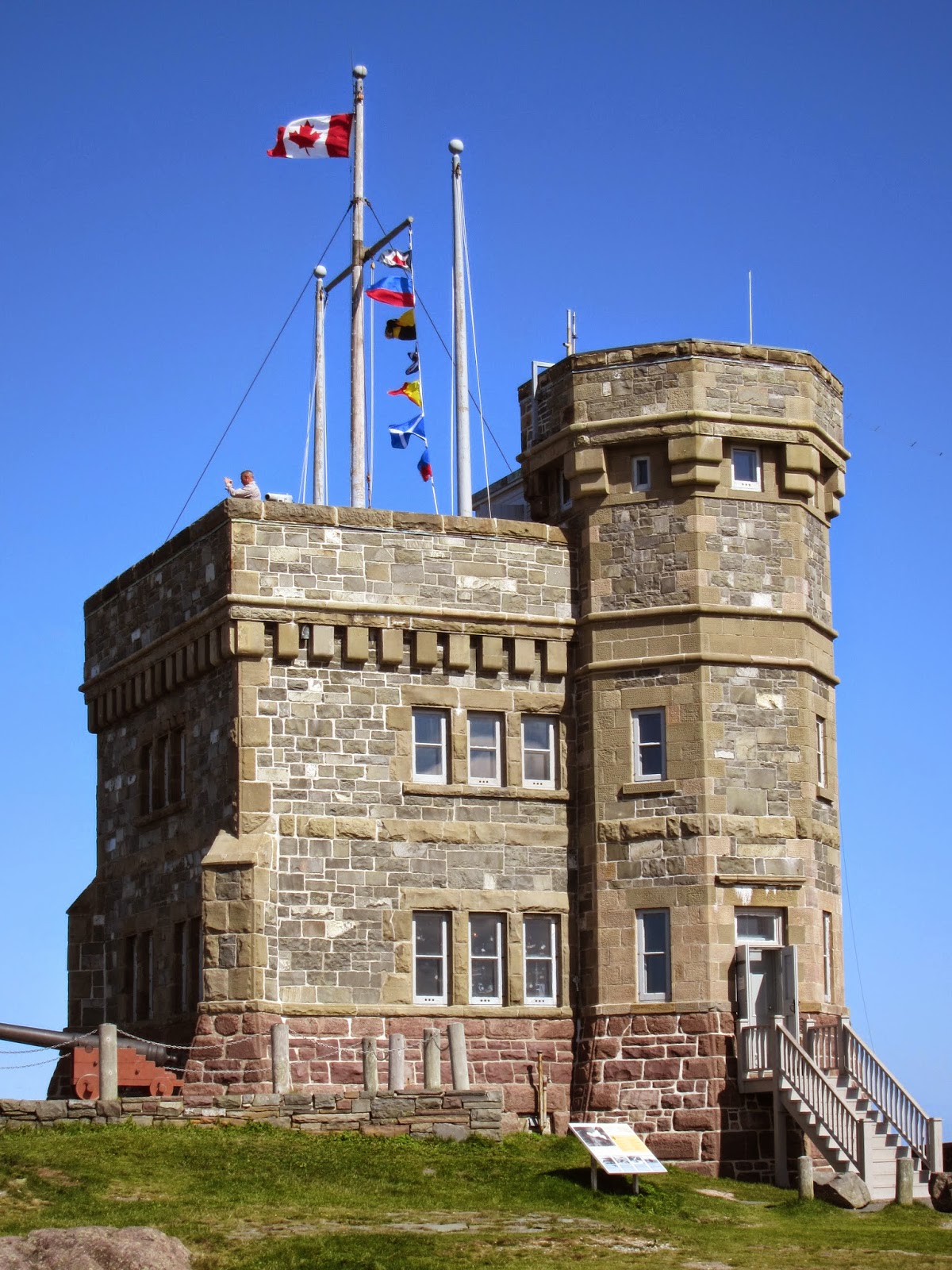 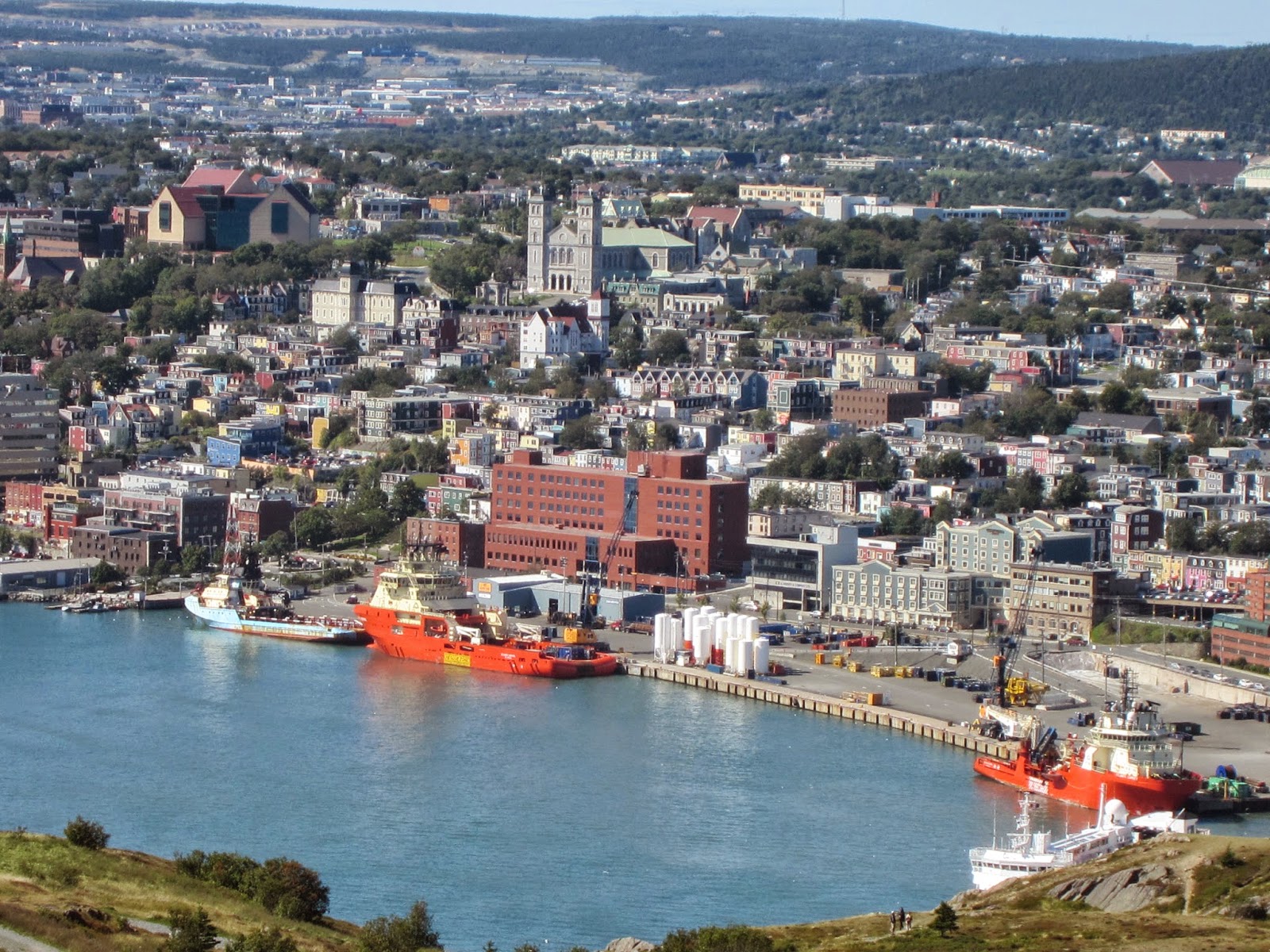 The view of the city from Signal Hill. The two stone towers in the centre are the Basilica of St John the Baptist, construction started in 1839, and the Basilica was finally consecrated in 1855.  The large house shaped building on the top left corner is The Rooms which opened in 2005, and houses the Museum, the Provincial archives, and the Provincial Art Gallery. I described a previous visit here.
When The Rooms was first under construction, I thought it was the ugliest building I'd ever seen, but I like it now.... especially inside. But that's another post.... 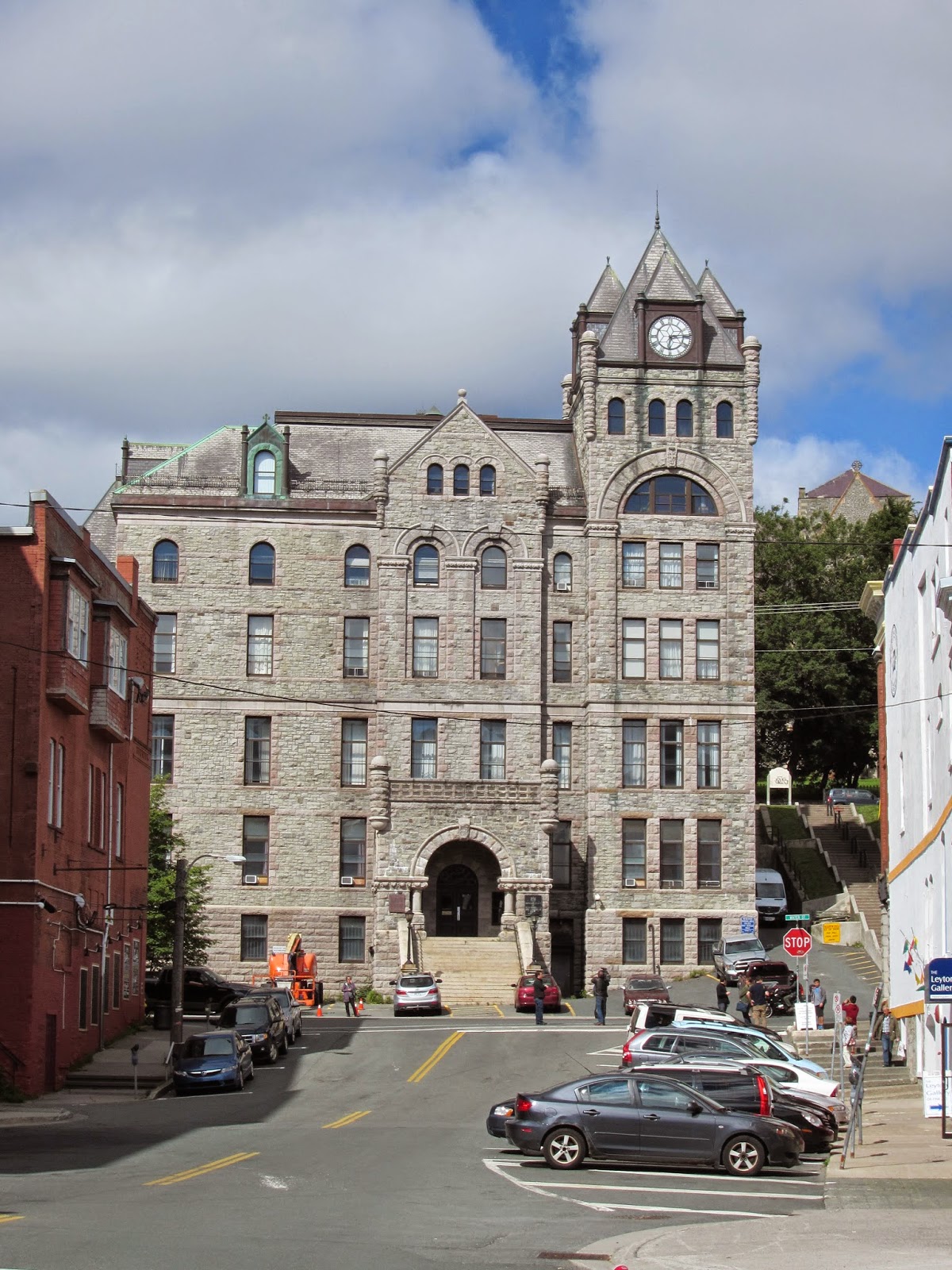 St. John's Court House, built in 1901 of local granite and sandstone. The steps to the right connect Water Street and Duckworth Street, and are on a site that was once a produce market and a public gallows. Not to worry..... Newfoundland's last public hanging occurred there in January 1835, when John Flood was hung for robbing the St. John's-Portugal Cove stagecoach. Crime definitely does not pay! 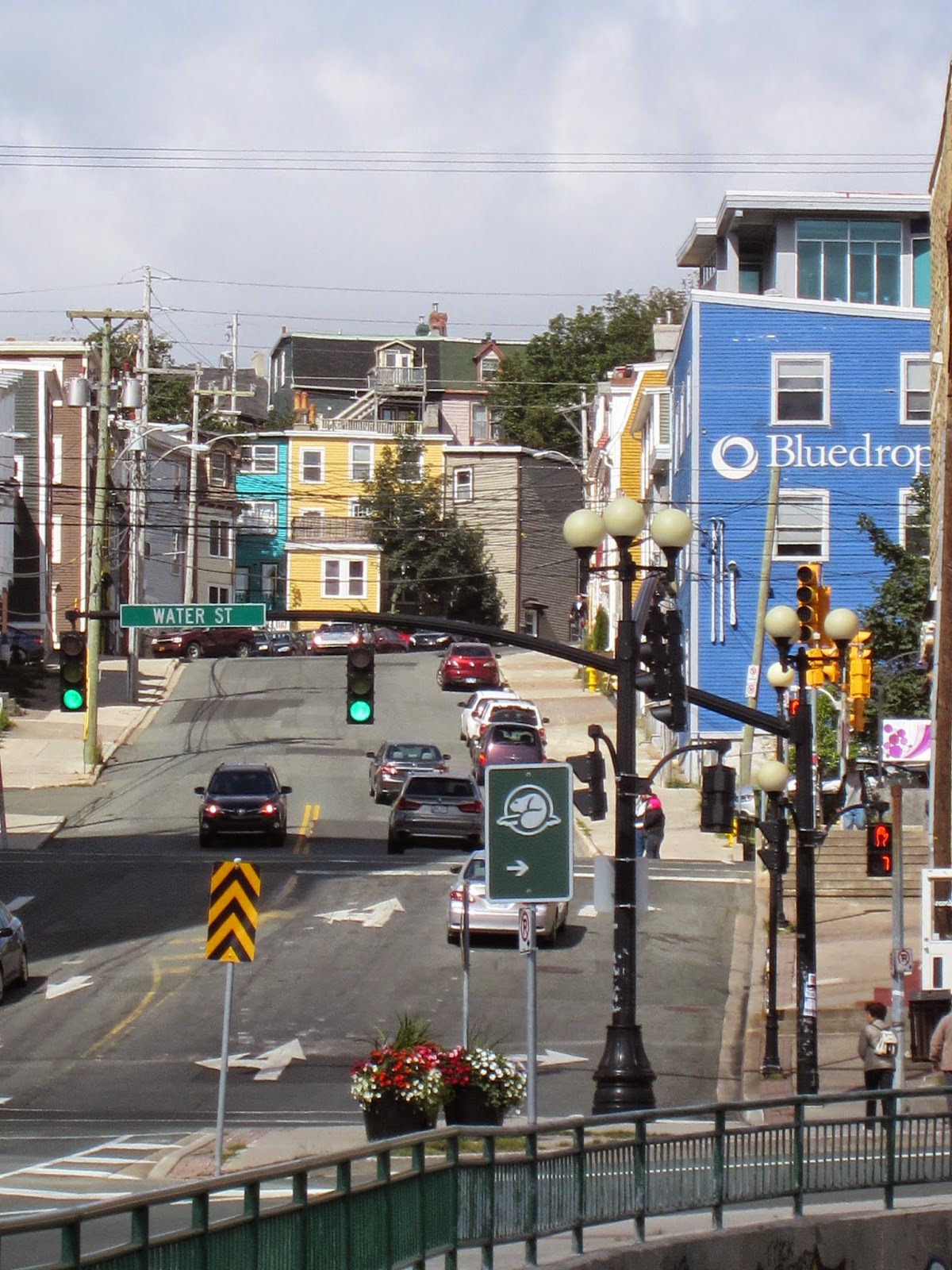 One of my greatest pleasures is to wander around the streets of St. John's, browsing my way through tourist trap shops and walking up and down some of the extremely steep streets, which are lined with colourful wooden houses, like these. Stopping for a coffee at the local Timmy's and watching the people go by. My idea of fun!

More to come about Newfoundland.
Posted by Shammickite at 16:40 8 comments:

A few more memories of a visit to the small fishing community of Brigus. 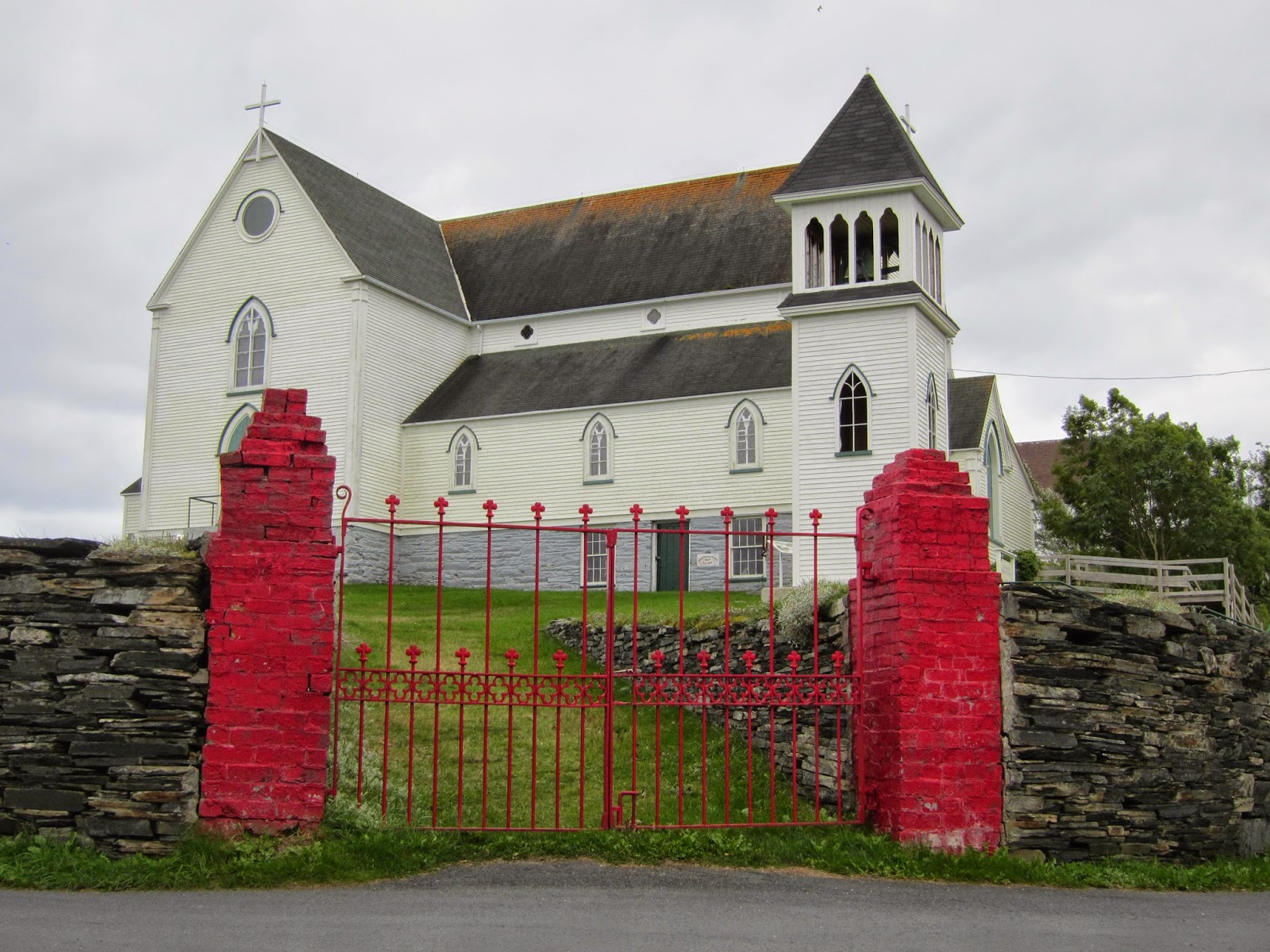 St. George's Heritage Church was constructed in the Gothic Revival style in 1876. It was built of wood by the men of Brigus. Significant interior features include the open gable beam and timber ceilings, plastered walls and the fact that it is in nearly original condition with only a few additions. It's a landmark in Brigus, both from the land and sea, and became a Registered Heritage Building in 2004. 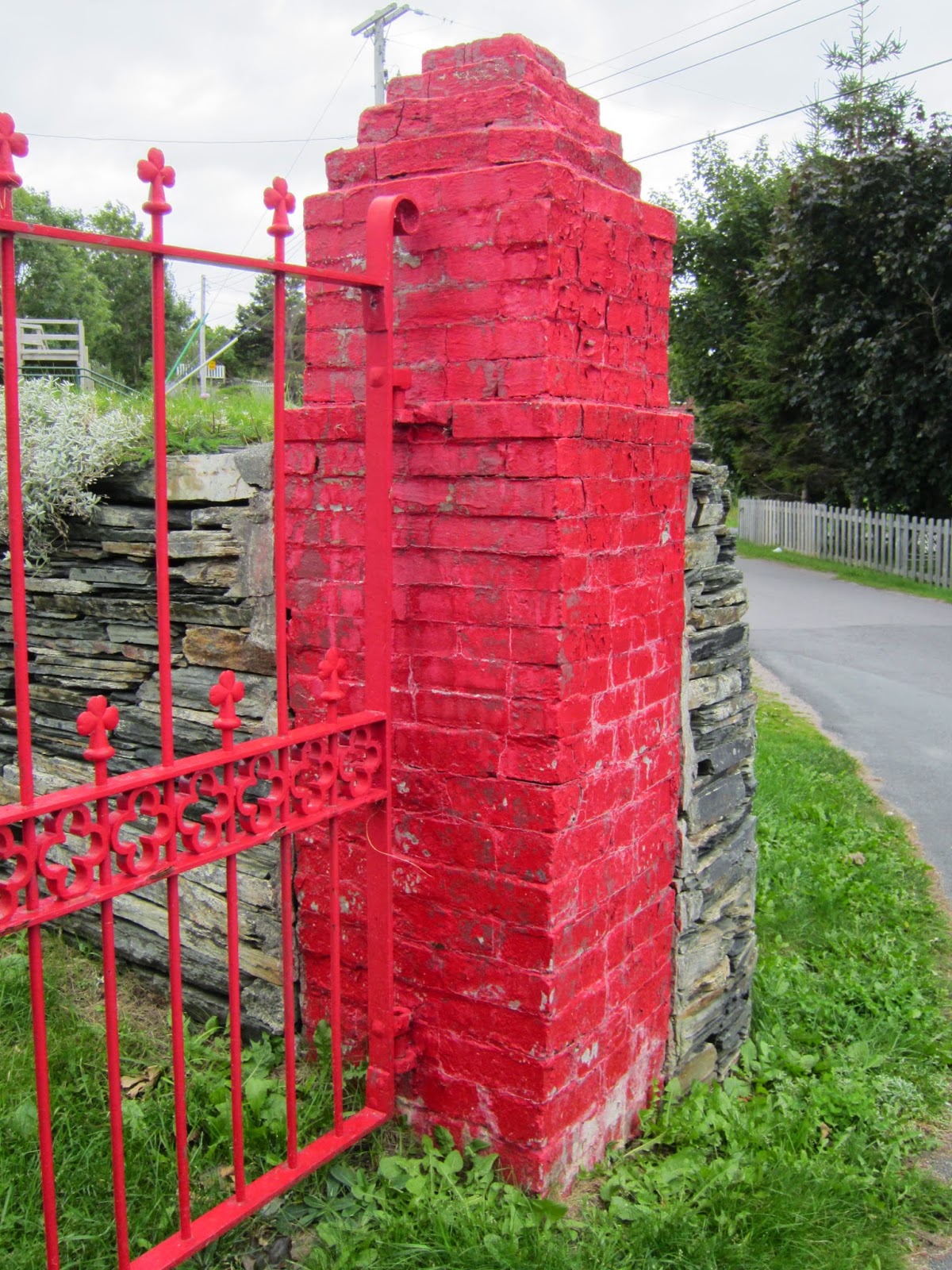 Visitors to the church can see the beautifully carved altar, pulpit, choir pews and frontals, communion rail and pews (all made of pine) and the christening font, all of which are original to the building. I have no idea why the gateposts and gates are painted bright red. But I like it! 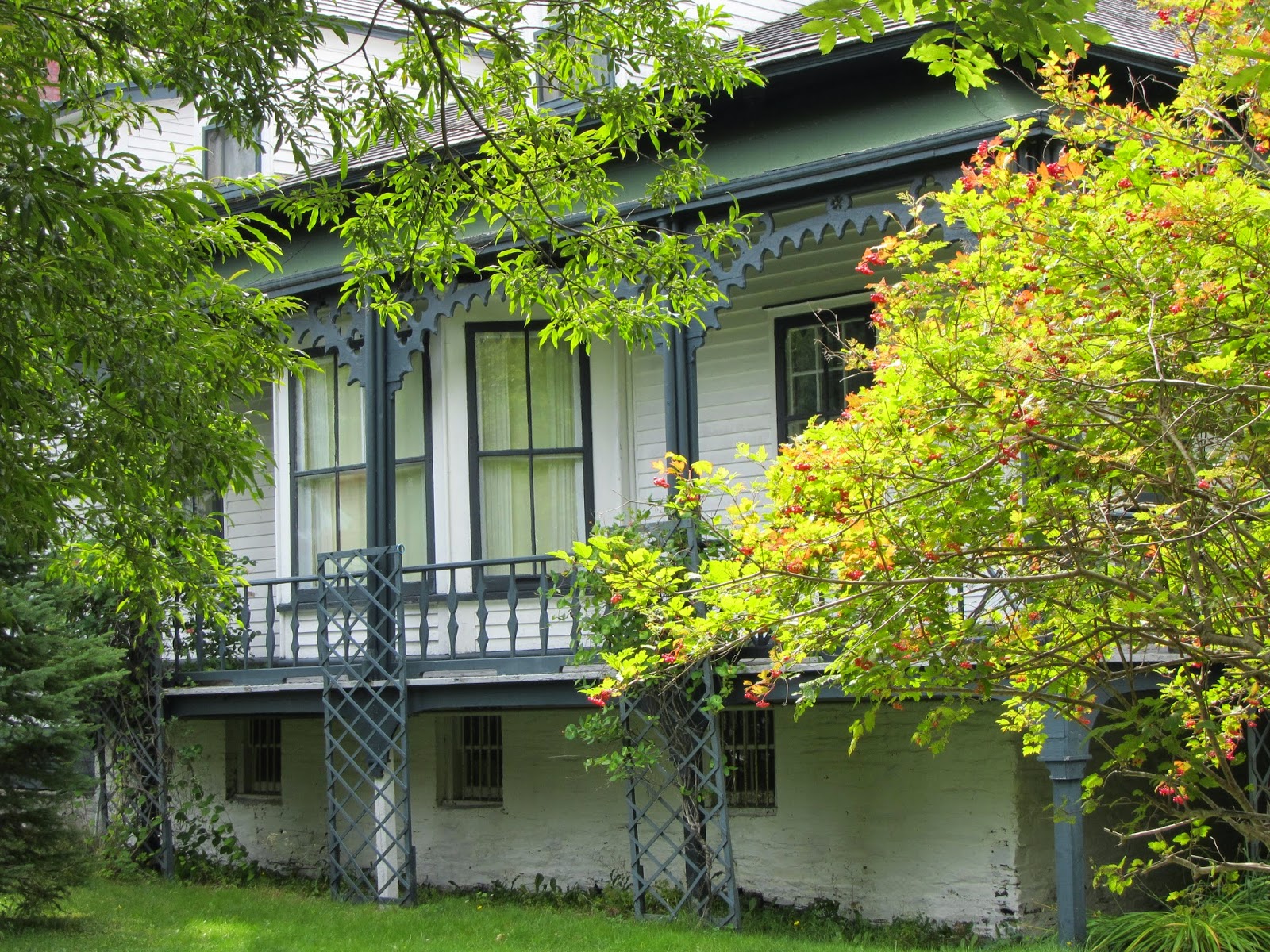 Hawthorne Cottage was the home of Captain Bob Bartlett, who commanded more than twenty Arctic expeditions. Captain Bartlett accompanied American Commander Robert Edwin Peary to the North Pole in 1909, and again in 1914.  During the Canadian Arctic expedition of 1913-18 under Arctic explorer Vilhjalmur Stefansson, Captain Bartlett walked 700 miles across Arctic ice and down the Siberian coast to save 14 people on the ill-fated Karluk from certain death. 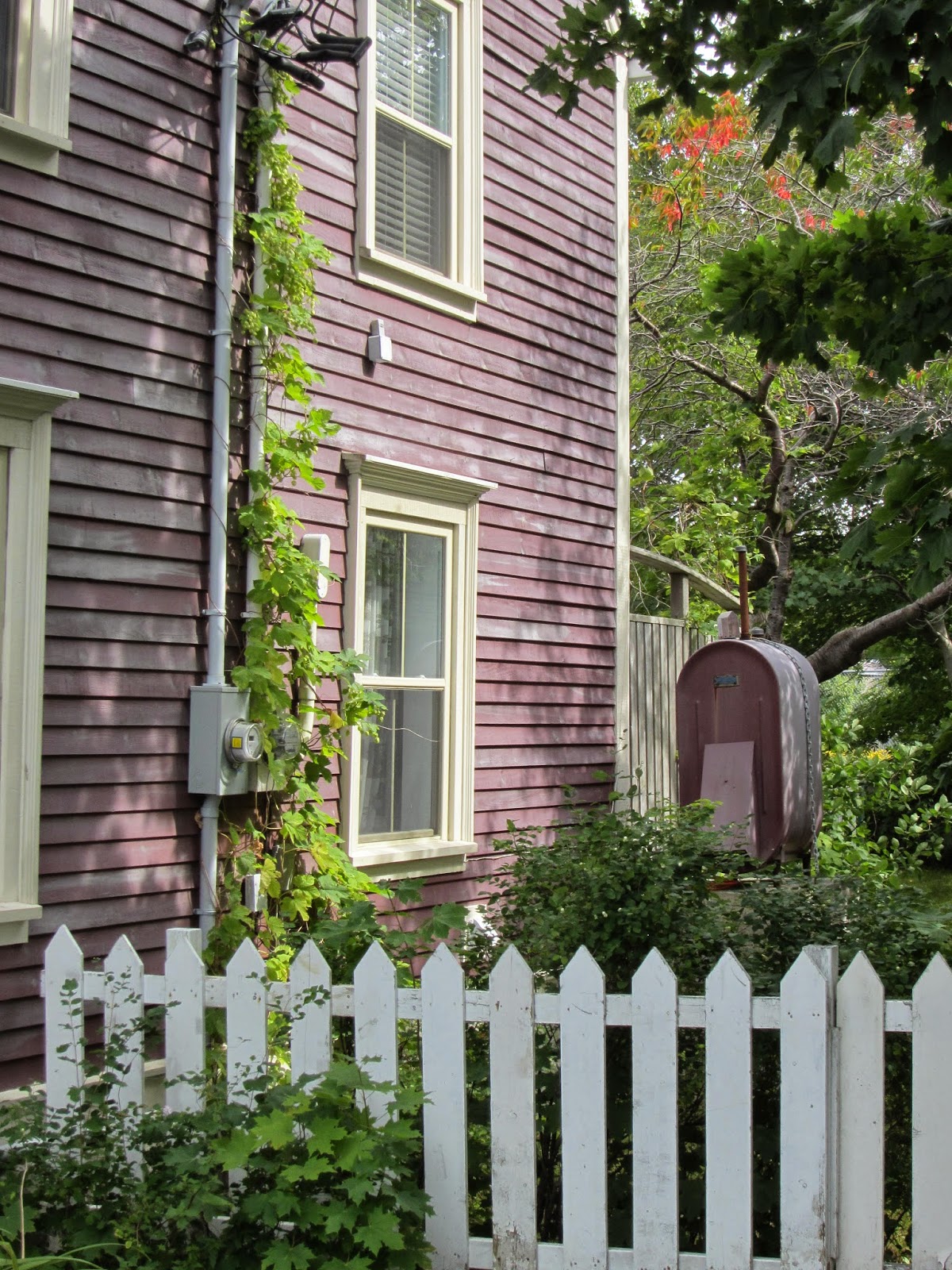 The quiet streets of Brigus are lined with charming colourful houses and secret gardens. I love the oil tank in this picture! 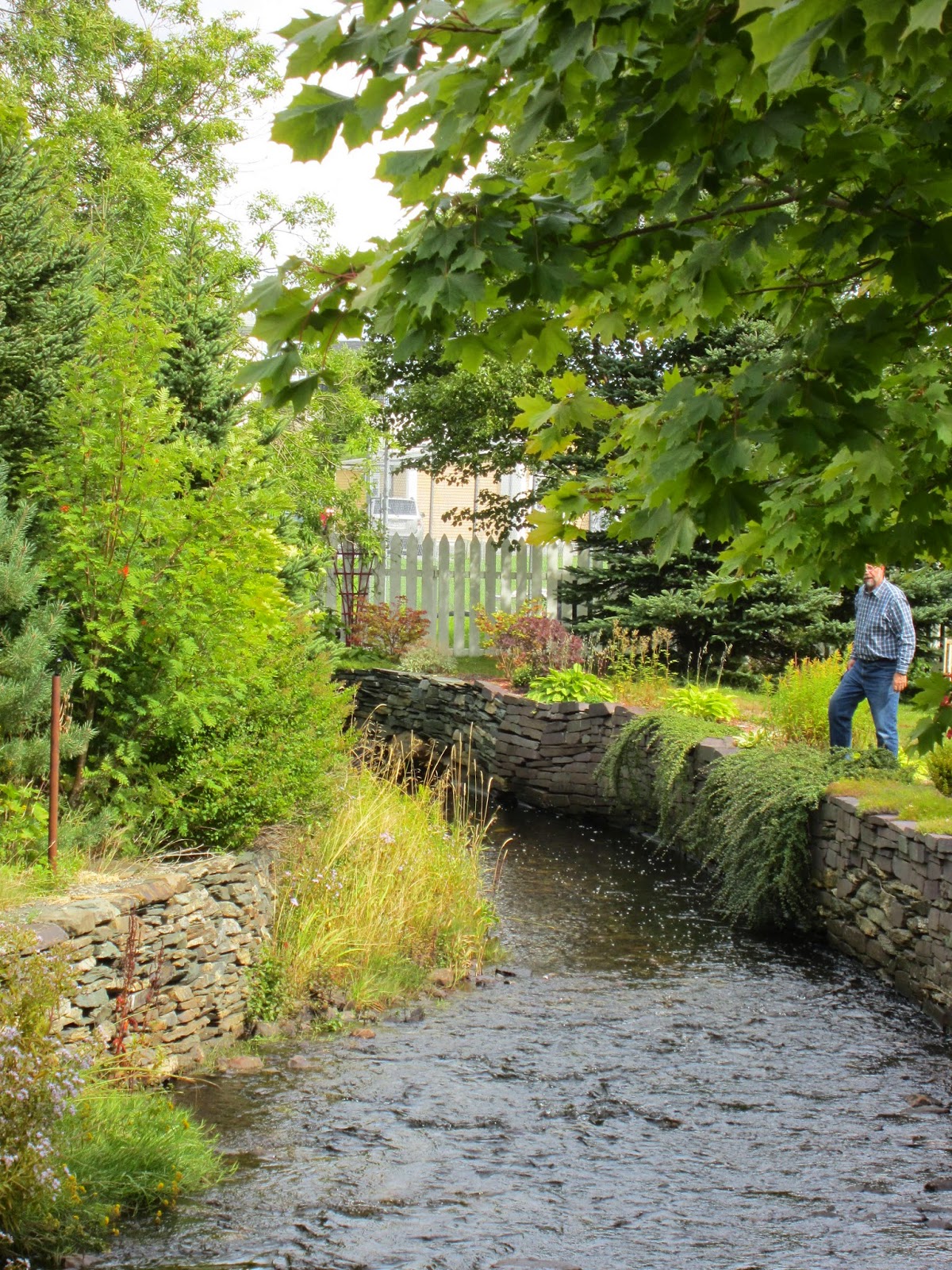 More pictures of the picturesque communities of Newfoundland still to come.
Posted by Shammickite at 08:01 6 comments:

A sunny day deserves a road trip, so we headed to the small fishing community of Brigus on Conception Bay. 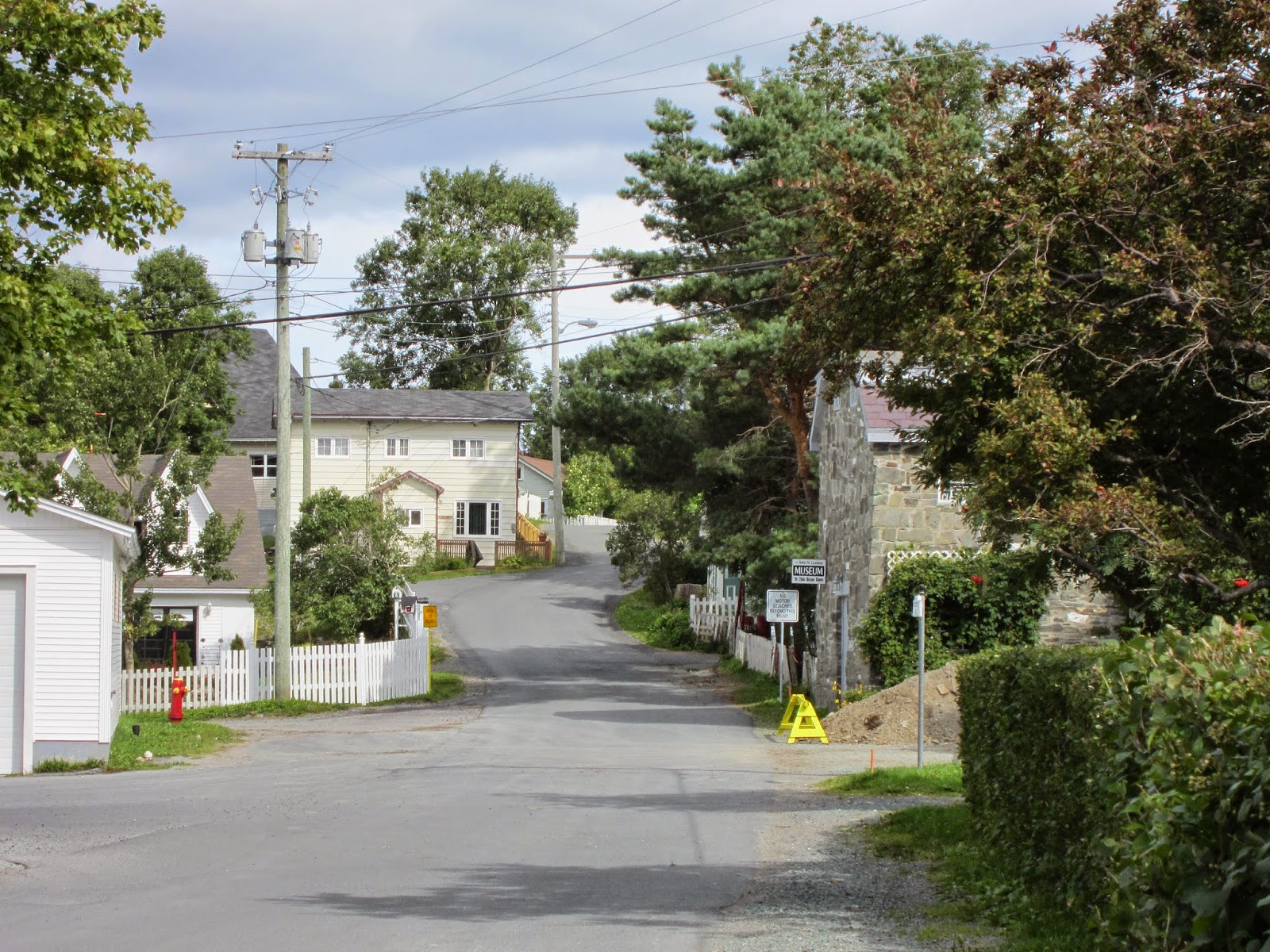 Brigus was fist settled around 1612 when the Spracklin family acquired the harbour. The first settlers came from England, Ireland and Wales. This day was warm and sunny, but the early settlers must have had quite a shock when they encountered their first Newfoundland winter weather! 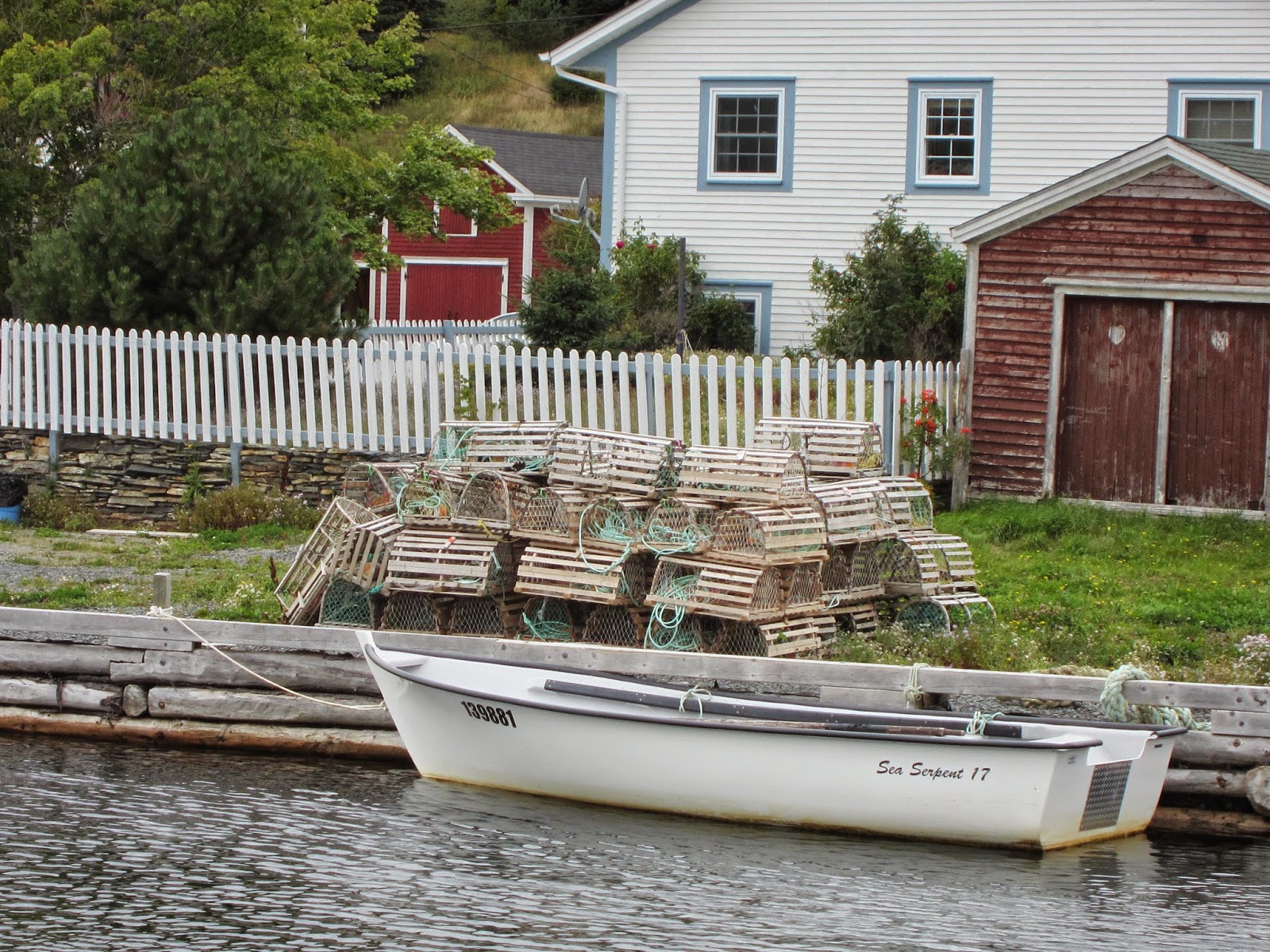 The people of Brigus traditionally made their living from the sea, but tourism is probably the main business these days, especially during the four day Blueberry Festival every August. Luckily, I missed that.... I think Brigus is a lot prettier without the crowds. 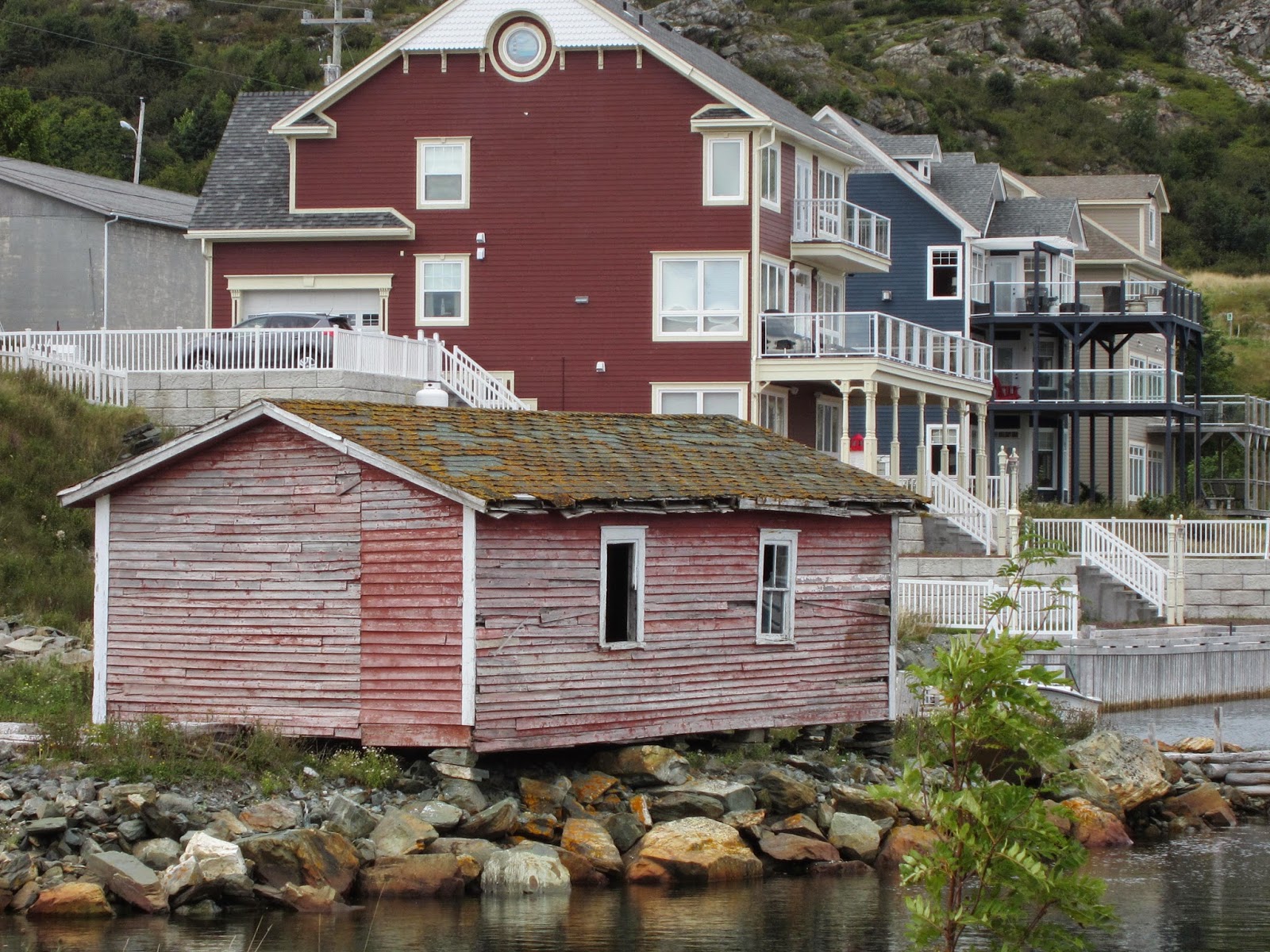 New buildings are springing up beside the old, and the distinctive character and design is being honoured. No two buildings are the same colour. 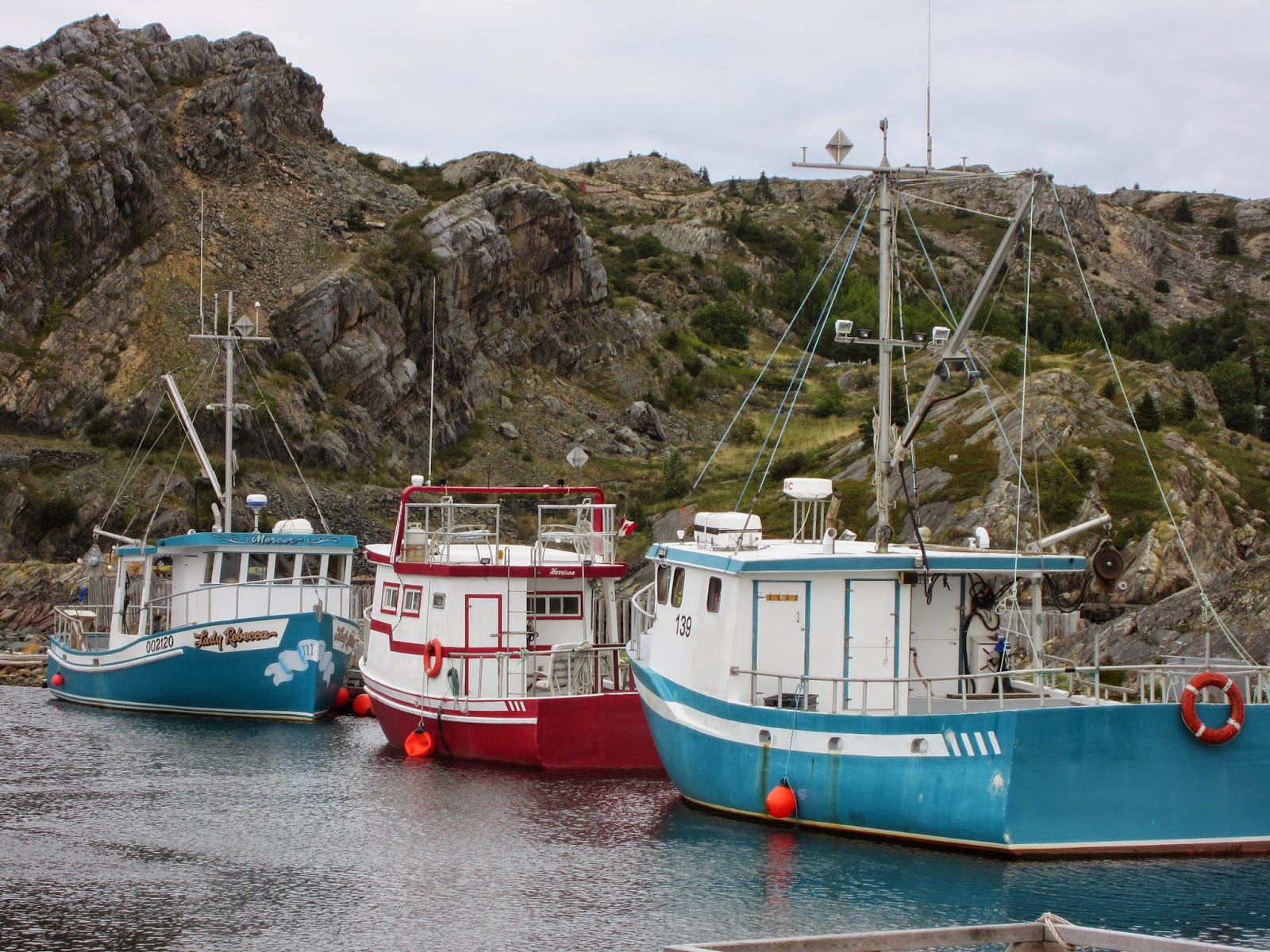 Some of the fishing boats lined up in the tiny harbour. Since 1992, there has been a moratorium on commercial cod fishing due to declining cod stocks in the North Atlantic, and many fishermen have lost their livelihood. Some personal fishing for cod is still allowed on certain licensed dates, but the main catch now is crab, shrimp and other shellfish.

More about Newfoundland to come - stay tuned.
Posted by Shammickite at 21:11 9 comments:

A couple of days after the Amadea left port, the AIDAbella was due to arrive in St Johns. This cruise ship is a lot bigger, and can carry 2,500 passengers and 646 crew. She flies the Italian flag, but the crew and passengers are mostly German.
I was told that she was due into port, so we went up Signal Hill to see if we could spot her out at sea.


Stay tuned for more memories of my trip to Newfoundland and Labrador.
Posted by Shammickite at 10:14 9 comments:

The MS Amadea was in port when I was in St Johns, Newfoundland, a couple of weeks ago. She's just a small cruise ship compared to some. She carries 624 passengers and 292 crew.

More pictures of my trip to Newfoundland and Labrador to come!
Posted by Shammickite at 17:08 7 comments:

Some of the handsome faces at Markham Fair. I should have made a note of the different breeds.

There are not a lot of sheep reared here in Ontario.... you see mostly beef and diary cattle in the country fields. But Markham Fair always has prize sheep on show, and a sheep shearing demonstration. Lots of city people come to the fair, and many have never seen this taking place.

The fleece comes off in one piece, and the wool from this one sheep is enough to knit a sweater.
More Markham Fair pictures to come.... or scroll down to previous posts.

Markham Fair guarantees something for everyone. On Thursday YoungerSon, The Bride and Isaac took in the Monster Truck races while I looked after the twins, and the family went again on Saturday to see the cows and horses and sheep. Lots of farm animals for the children to look at.

And not only farm animals some were a little more exotic.

The camel has a single hump;
The dromedary two;
Or else the other way around.
I'm never sure, are you?  -  Ogden Nash.

More pictures to come, or scroll down to previous post.
Posted by Shammickite at 06:00 3 comments:

If it's the first week of October, then it must be Markham Fair, and that means goodbye to summer and fall is definitely here. It was blustery with a mixture of clouds and sunshine, but regardless of the weather, everyone has fun at the Fair!


More pictures to come!
Posted by Shammickite at 12:22 8 comments: