I had never heard of Black Friday until a few years ago. It's an American shopping frenzy that takes place on the day after the U.S. Thanksgiving Thursday. From what I saw on the TV news tonight, it's not only for shopping.... throw in a couple of riots, scuffles with police on the store floor, and gunshots fired in crowded parking lots.
Black Friday has crossed the border into Canada, even though our Thanksgiving was seven weeks ago. And we're a lot less frantic than our American cousins.
We line up politely waiting for the stores to open.
We hold the door open for the customers coming in behind us.
And we apologise if we grab the same item as someone else. It's the Canadian way.
I thought I'd check out the local mall. 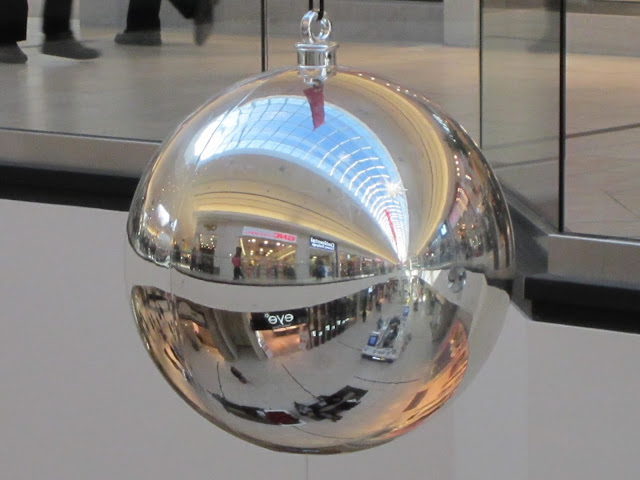 Although the parking lot was full, the mall seemed relatively empty, until I went into some of the stores and had to join a long queue to reach the cashier. 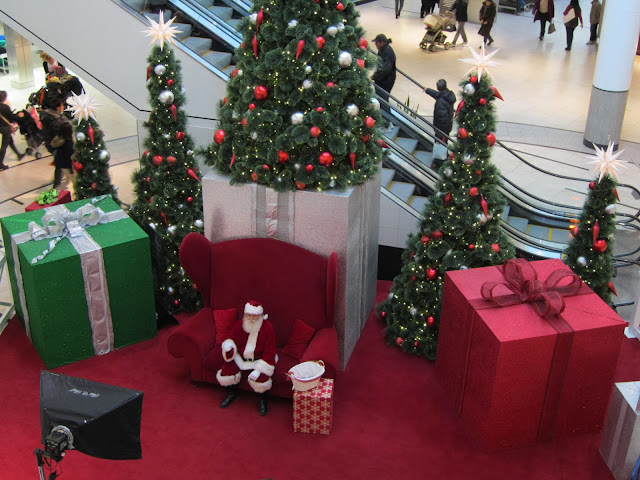 Good old Santa seemed a bit lonely sitting in his oversized chair. But it's early days yet.... still a couple of days until December starts. I wonder what's in those ginormous prezzies. 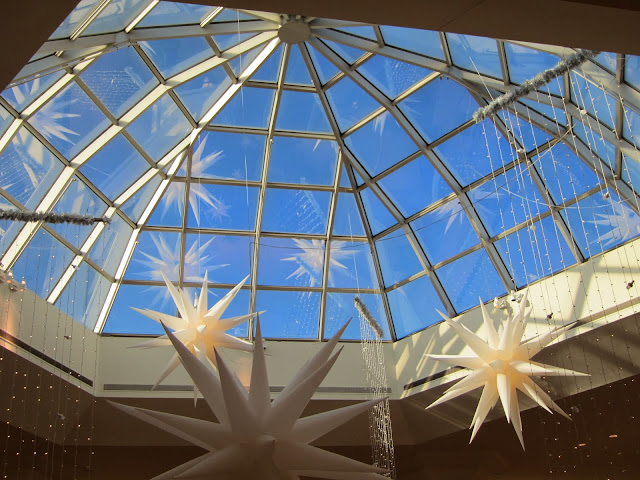 Christmas decorations everywhere.
Except in my house.
For me, real Christmas doesn't begin until the week before the big day and that's when I put the tree up. OlderSon says I'm a Grinch. I think he already has his house decorated. The Hallowe'en stuff comes down and the Christmas stuff goes up. But I don't want to be reminded of Christmas in my house every day for a month or more, it's bad enough when I go shopping! Bah, Humbug!
Posted by Shammickite at 19:34 7 comments:

I've been doing some more volunteering at the theatre, and this time the concert was Jully Black. OK.... if you don't live in Canada her name may not be familiar, but if she and her band ever come to your town, definitely go and see her! Don't miss it. 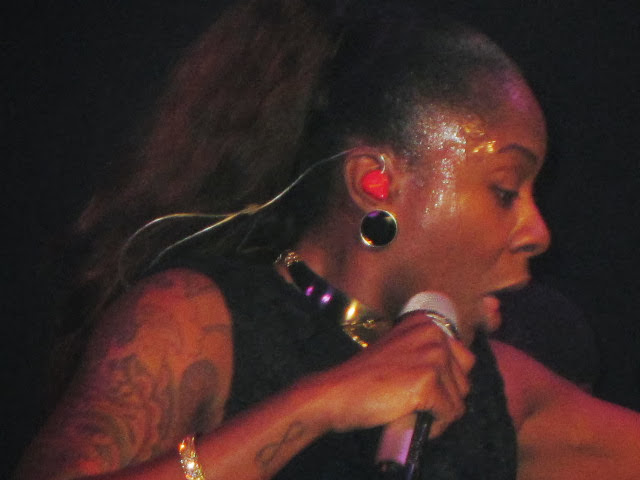 Born the youngest of nine children in the notorious Jane and Finch neighbourhood in Toronto, Jully started singing in church when she was little. She's been part of the Canadian R&B music scene for a few years now.... and she is nothing short of DYNAMIC! She performed with a 4 piece band, and a couple of crazy hiphop dancers. As soon as those hiphop guys hit the stage, I knew we were in for a wild night.

Jully performed at the opening of the 2010 Olympics in Vancouver, opened for Kanye West in Singapore, headlined the Canada Day concert in Trafalgar Square, London, and has sung at a private event for the Queen.
Her show here was sold out, and the crowd were very appreciative, dancing along with her and making the rafters shake with whistles and cheering. The show was ultra-high energy, the best concert I've ever been at, and as our modest little theatre seats only about 150 people maximum, it's a very intimate venue. The audience is very close to the performers.... you can see every bead of sweat! 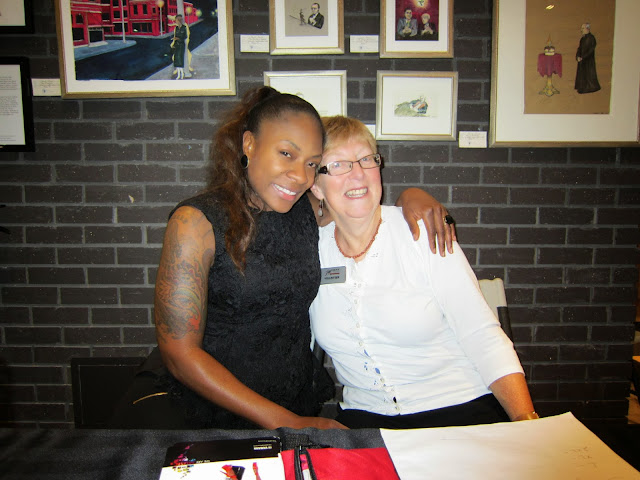 I've just noticed that I missed my Blogiversary! Oh No! I've been scribbling my thoughts and posting my photos on the blog for seven years (and three days). How the time flies. When I started, I really had no idea what a blog actually was. Since then bloggers have come and gone, and new bloggers have arrived, and I've been exchanging comments with some of you wonderful people since the beginning. 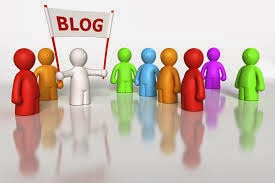 My life has changed a lot during those seven years (and three days).  I sold my big house and downsized to a smaller one. I've gained a couple of lovely daughters, and became a proud Nana when four energetic little people joined the family.

During those seven years (and three days) there have been over 37,000 page views, 656 blog posts, no idea how many photos, well over 10,000 comments, and I've probably made the same amount of comments on other people's blogs. I've made blog friends all over the world, and have even met one of my bloggers in person.... sadly passed away now. R.I.P. Brian. I miss your news from the North.
I haven't been a very good blogger recently.... life gets very busy.... but I aim to continue, so watch this space!
Posted by Shammickite at 09:09 9 comments: 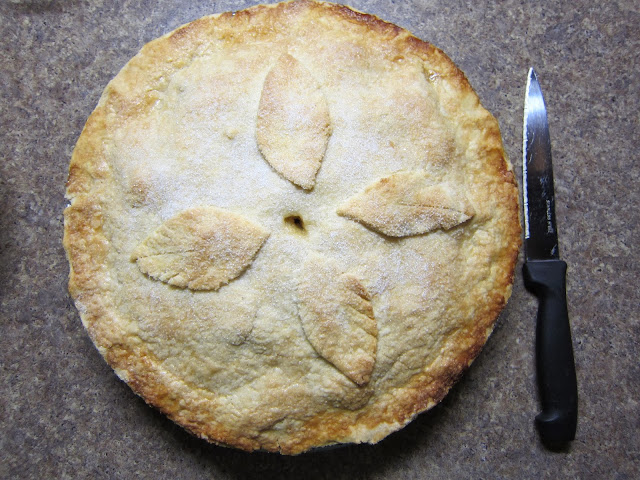 Makes the kitchen smell so good.
And it makes me forget what's going on outside...... 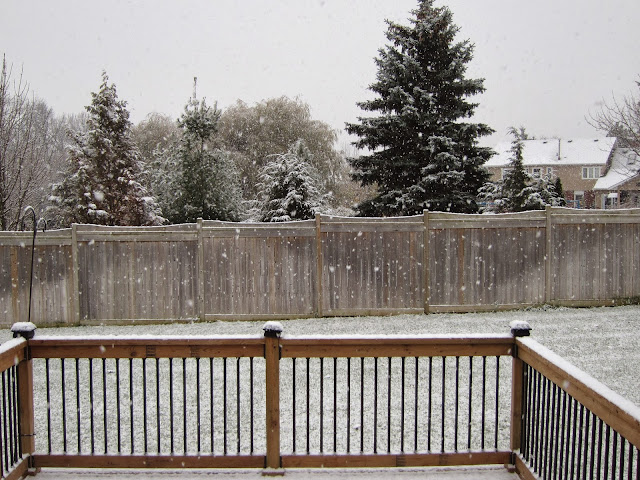 ..... the first snow flurry of the winter!
All melted now, but it won't be long before it will be a winter wonderland out there.
Now, where did I put my winter boots?
Posted by Shammickite at 05:00 13 comments:

On November 11th, we remember those who lost their lives during war. And we pray that our children and our grandchildren will never have to go though another conflict.

In May 2000, the remains of an unidentified Canadian soldier who died in the First World War were repatriated from France and, with great ceremony, were buried in a special tomb in front of the National War Memorial in Ottawa, Canada. This is the Tomb of the Unknown Soldier. 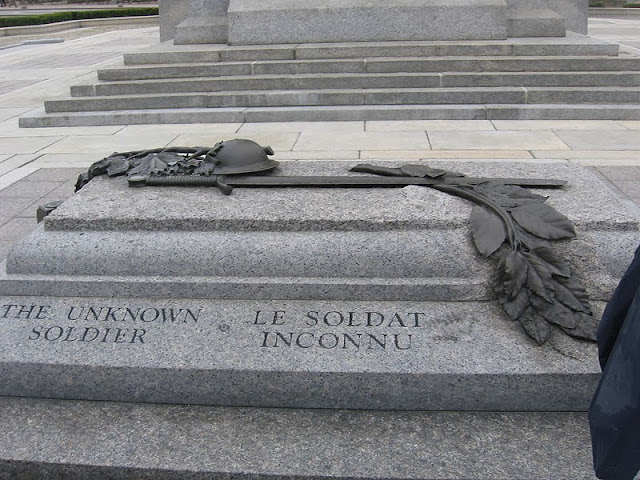 The Tomb of the Unknown Soldier was created to honour the more than 116,000 Canadians who scrificed their lives in the cause of peace and freedom. The Unknown Soldier represents all Canadians, whether they be navy, army, air force or merchant marine, who died or may die for their country in all conflicts - past, present and future.

The project began several years ago at the instigation of The Royal Canadian Legion who developed the idea as a Millennium Project, and it was taken up by the Canadian Government under the lead of Veterans Affairs Canada.

Some more pics of D's masterpiece of a car. Would you be willing to drive a car like this down your street? Or would you grab a wig and dark glasses? 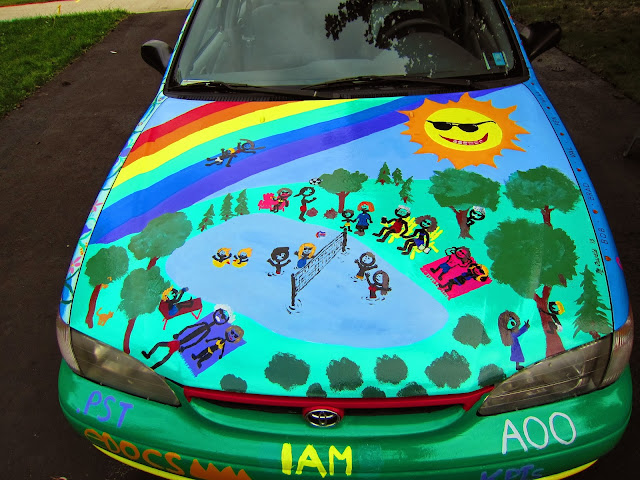 The hood painted by D's family, showing all 17 members of her family including the 2 cats. She can list each individual stick person by name, and tell you what they are doing...... 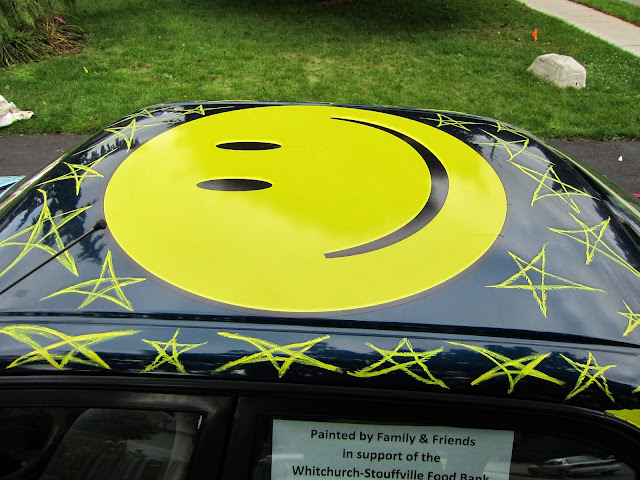 The roof...... better not break the speed limit or the police helicopter will get you for sure! 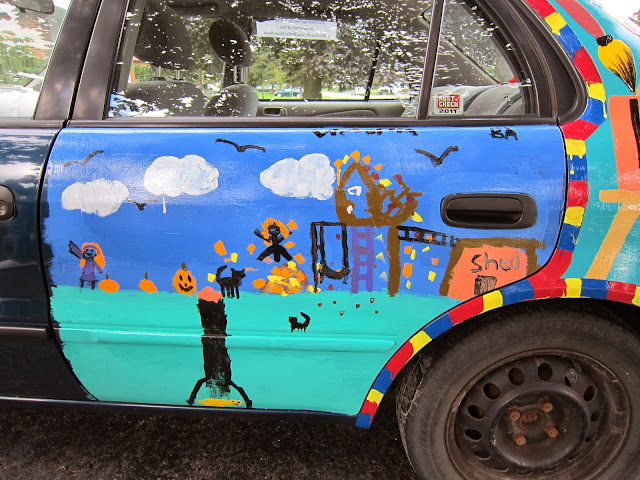 Playing in the leaves in the playground, painted by 2 little girls. I'm glad they labelled the shed. But what's the big black thing in the middle????

For more pictures of this automotive masterpiece, see previous post.
Posted by Shammickite at 12:29 6 comments:

My good friend D wanted to get her boring dark blue 12 year old car repainted a brighter colour, but that's an expensive proposition, so she hit upon the idea of getting her friends and family to paint it and make some cash for the local Food Bank at the same time. Brilliant!

She sold off all the parts of the car.... $200 for a fender, $200 for the roof and trunk, $250 for the hood, $100 for a bumper, $50 for a wheel hub, etc, etc. Five of us decided to share the left front fender and one sunny September day we arrived ready to create a masterpiece. Automotive paint was donated by a local car repair business and brushes and prep materials donated by a local hardware store.

This is what we did: 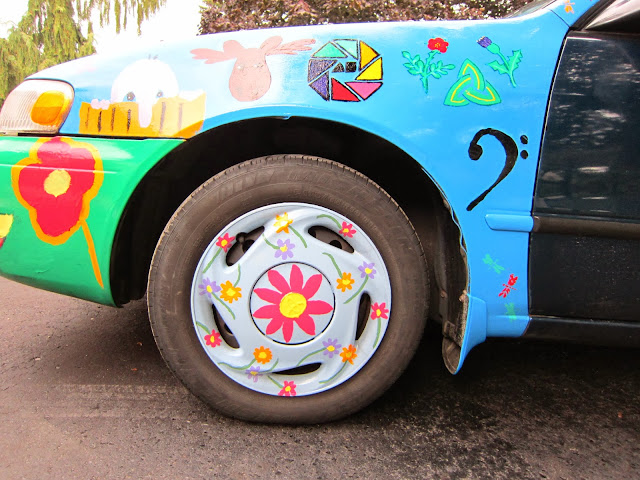 L - R just the blue bit: "Kilroy Was Here", a moose to represent the Canadians in our paint group, the logo for the Triangle Square Square Dance Club, The English Rose and the Scottish Thistle either side of a Celtic knot representing our Scottish Country Dance group, a bass clef and some dragonflies. Quite a mixture! Someone else did the bumper and the wheel.

The whole car.... not quite finished: 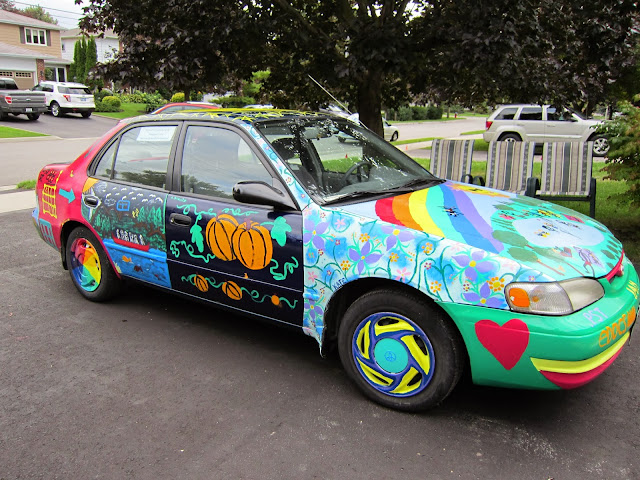 I have mentioned that I volunteer at the local theatre..... and yesterday I was taking tickets and showing people to their seats for a concert by Canadian fiddler Ashley MacIsaac.
Never heard of him?
He's a Cape Breton fiddler who started his career about 20 years ago and quickly became the notorious bad boy of the Canadian music scene with his outrageous behaviour, his brush with cocaine addiction and eventual bankruptcy. But he's back performing concerts and he's truly amazing.... sold out theatre and two standing ovations.

I sold CDs for him at the intermission and after the show. He signed my well used copy of the first (and best IMHO!) CD he ever made (20 years ago), and gave me copies of his 2 most recent CDs. I'll be playing them today. A great evening.