Looking Forward to Next Year.

Pack away the mics and dismantle the spotlights. Our 48th annual Variety Show is over for another year.

There were five performances altogether. The first, on Tuesday, was free for seniors, nursing home residents, disabled people, and special people from Participation House. This is a really enthusiastic audience, they love the show. They were joining in with the songs and those who were able were dancing in the aisles!

Then performances on Thursday, Friday, and two on Saturday.

About 150 volunteers are involved in the production. 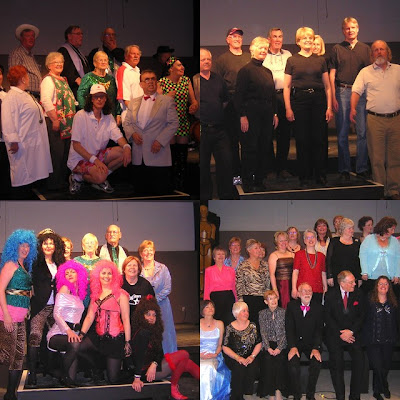 It's a mix of music, dance and comedy, all performed by local people. I'm part of the chorus, and I try to be included in at least one dance number. This year it was The Hockey Dance. 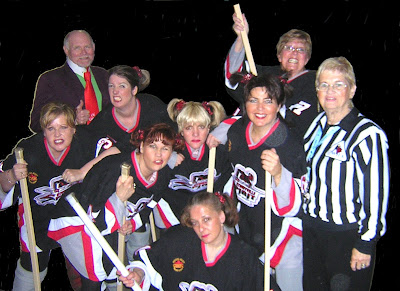 This spring Variety Show has been running for 48 years, and used to be eagerly anticipated by everyone in town, with huge line-ups for tickets on show nights. But sadly, there's a lot more competition for the entertainment dollar these days, and it's hard to compete with movie theatres and TV shows like "Dancing with the Stars" and "Survivor". Plus it's hockey play-offs, even though the Leafs have already been knocked out of contention.

A group of my Red Hat ladies came to the show, and of course, my family were there, including 9 week old Callum, but many of my other friends and neighbours on the street didn't come, which I find a bit disappointing. Too bad, they missed a great show. However, our audiences were very responsive.... I could hear howls of laughter at the skits, and lots of loud applause after the song and dance numbers. I've heard nothing but praise for the show, it certainly was one of the best we have done. Proceeds will be donated to The Terry Fox Foundation.

Perhaps we'll see you in the front row next year?

Ontario residents can now legally hang their washing out to dry in the fresh air after the Premier lifted the ban on outdoor clotheslines last Friday.

The Premier said during his announcement, "There's a whole generation of kids growing up today who think a clothesline is a wrestling move".

Hanging clothes outside? Where everyone can see them?? What a concept!

No longer will the woosh of electric clothes dryers be heard across the Province, now we can hang our unmentionables out to dry on a sunny day and not worry about offending the neighbours. 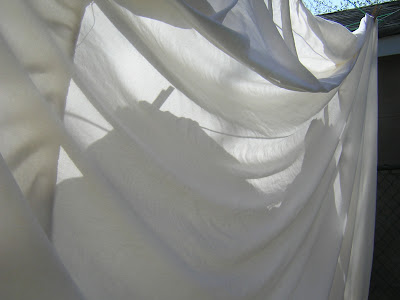 We've been rehearsing since January... and now it's Show Time!

The theme of this year's annual Variety Show is an Awards Night, celebrating the Oscars, the Emmys, the Junos, the Golden Globes, and whatever other ShowBiz awards you can think of, there are plenty of them.

Dim the lights, strike up the band, and let's Break A Leg!!! 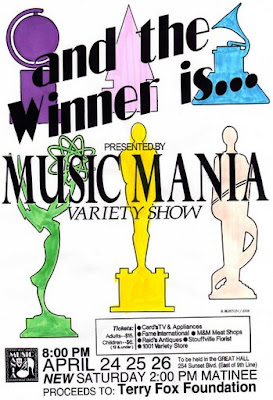 This show has a little bit of everything. We have music, comedy and dance, all provided by the talented people of this small town.

The dancers are awesome and oh so graceful.... 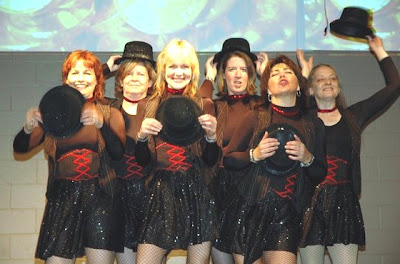 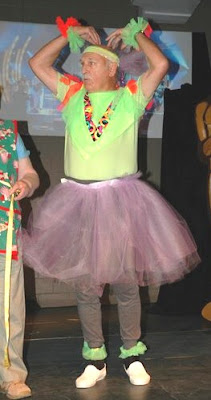 We have singing cowboys.... 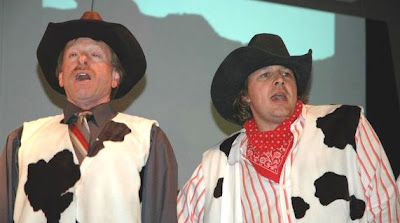 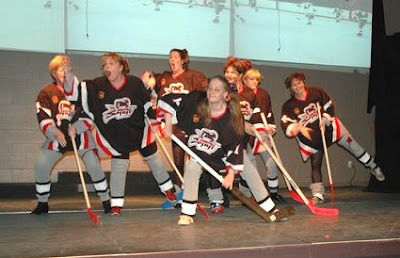 Look closely... there's Elvis and Tina Turner, The Phantom... and isn't that Willie Nelson and Marilyn opening up the winner's envelope? All ably supported by a touch of glamour, great music and loads of sparkle. 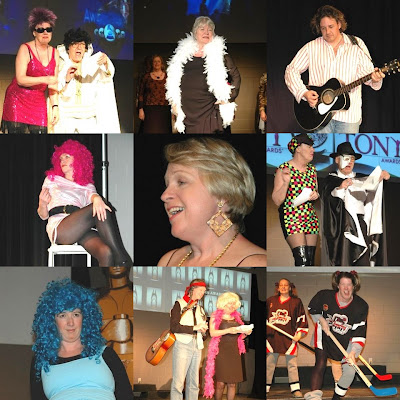 The Grand Finale.... these pictures were taken at Dress Rehearsal, so you have to overlook the untidy cables on the floor and the lack of audience! I'm in the back row somewhere.... but I'm also in the Hockey Dance picture, see if you can spot me! 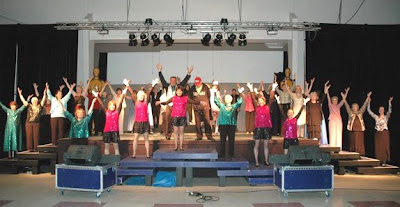 Tickets available at the door, Thursday, Friday and Saturday night, and a special Saturday Matinee.... see you at the Theatre!!
Posted by Shammickite at 11:33 33 comments:

Everywhere I look... it's Spring! 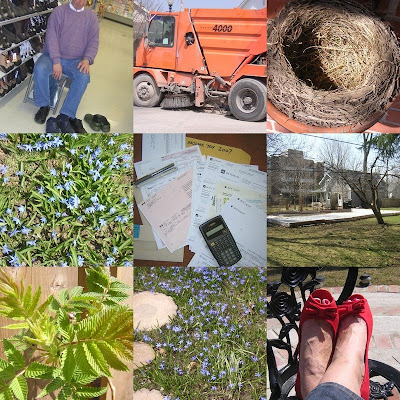 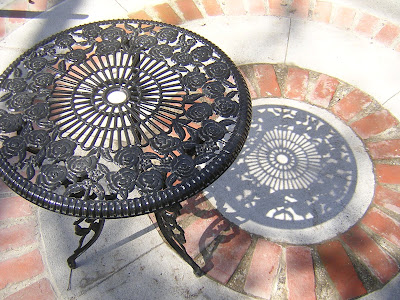 Spring has come to Southern Ontario, at last!
It's been a very long winter.
. 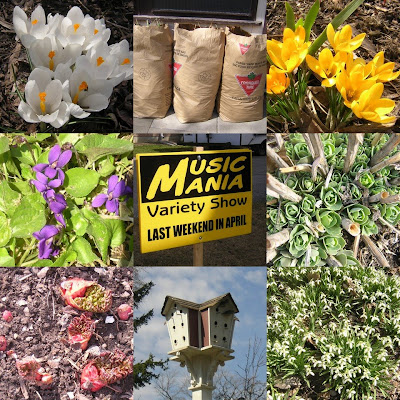 I saw something unusual in the middle of the back yard this morning, and I know it wasn't there yesterday.
When I went to check it out, this is what I found. 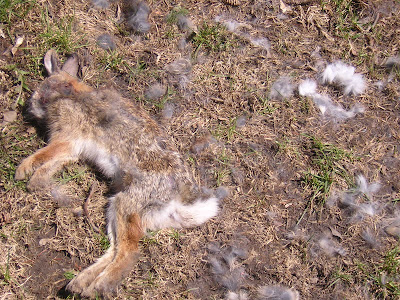 I wonder what got him? A hawk, perhaps, or a fox? Or next door's cat?

He's been disposed of now.

The Evolution of LipSync

Have you seen this video?
Those guys do a pretty good job with their dance routines, but we knew we could do better at the LipSync Contest last weekend.
I burnt a CD with snippets of fourteen songs starting with the Beach Boys all the way to N'Sync, and we put the funky moves to it!

Uhoh.... Our synchronicity seems to be temporarily lacking as we're all supposed to be doing the same moves at the same time. I'm not quite sure what The Space Cadet is doing.
We came Third amid appreciative cheers and hollering from the audience.... and yes, before you ask, there were more than three contestants! 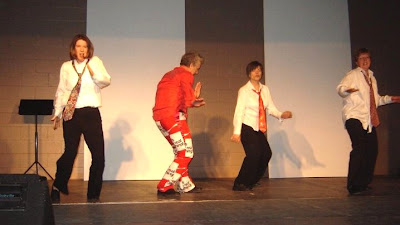 Zoom in on The Space Cadet to get a good look at the message on his trousers.
Posted by Shammickite at 10:05 19 comments:

Raindrops Keep Falling on my Head.....

April showers.... we had a few this morning, and a couple of loud claps of thunder too...... 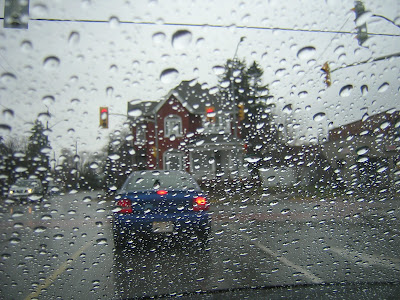 .... but the sun was shining all afternoon to apologise.
Posted by Shammickite at 17:20 20 comments:

This old clapboard General Store has been in business since before 1875, but it's sitting on property that's needed for road widening. This town's getting bigger. Lot's of debate going on... move it further back on the property, or bring in the bulldozers? 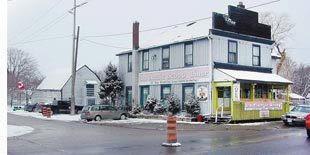 Back in the 1930's and 40's it was used as a Post Office. Currently it's the home of Da Classic Scoop, a funky diner, serving breakfasts and lunches, and icecream in the summer. Inside, the walls are covered with old time memorabilia... record sleeves, licence plates, movie posters, other people's junk that the current owner has turned into treasure.

It would be a shame to see this local landmark disappear, but like so many growing towns, space is needed for "improvements". Even though the Heritage Advisory Committee is advocating moving the building, the ole gal will probably be gone by the summer. Saving old buildings just because they are old isn't high on the town's financial priority list, unless there is unique architectural value.

So, in order say goodbye to Da Classic Scoop in grand style, the Red Hat Ladies got all spiffed up in our going-out-to-lunch outfits, and did just that! 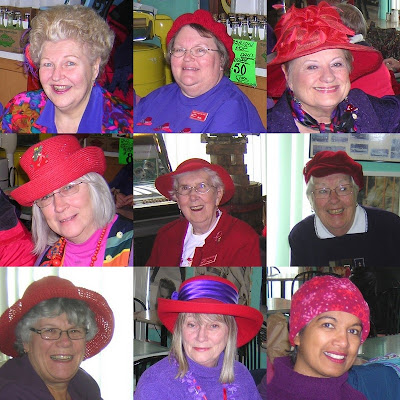 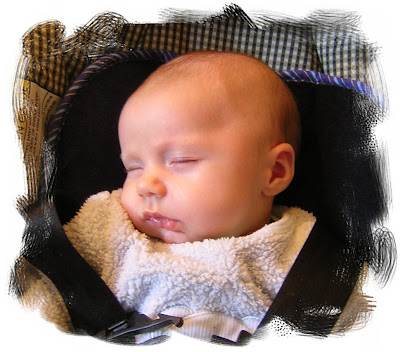 I think he's just about to wake up. Sssshhh!
Posted by Shammickite at 20:12 27 comments:

It's Book Sale weekend.
Every April the Library does some house cleaning, and holds a giant sale of library discards and book donations from the community. 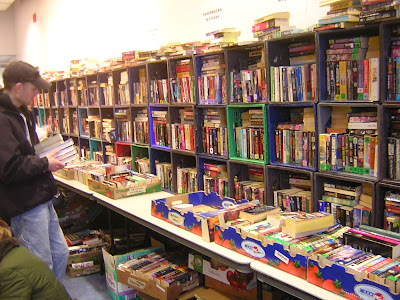 It goes on for five days, and this year more books than ever have been donated. 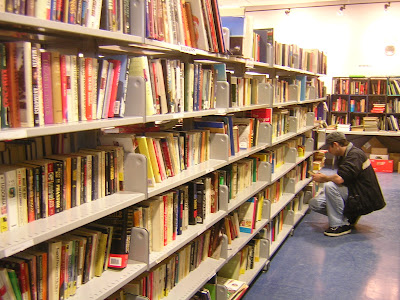 Thousands of books are sorted by volunteers and stacked in one of the meeting rooms at the Leisure Centre. Last year, the sale raised $12,000. Proceeds go to purchasing more books, to enhance programming, and to support the summer reading program. 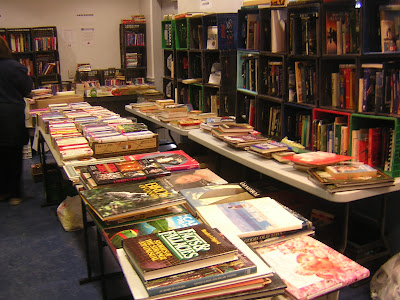 There's no way I could possibly walk away from a giant book sale empty-handed, so here's my haul.
Bill Bryson paperback... he's so funny. I enjoy everything he writes.
The Best of Pantry... recipes from the magazine Harrowsmith Country Life... familiar to Canadians.
Quick Cooking for Two... well, there's only two of us here most of the time.
Sweetie Pie... luckily Richard Simmons kept syrupy pictures of himself to a minimum in this book, most of the pics are of sumptuous mouth-watering desserts that I'll have to try.
And a little history book about Lynmouth... very near my home town in Devon, UK. 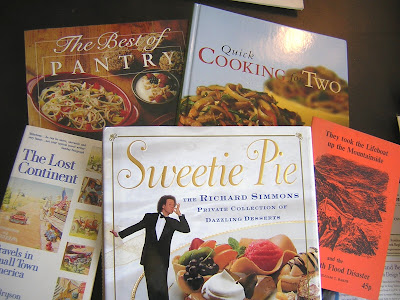 The Space Cadet bought a book too.... a little light bedtime reading... The History of Mathematics.
Posted by Shammickite at 14:50 16 comments: