I really enjoyed wandering around Billy Gauthier's exhibition of carvings, "Beyond Bones", this summer at The Rooms in St John's.     Billy Gauthier was born in Happy Valley - Goose Bay, Labrador, in 1978. He has Inuit and Metis ancestry and started carving in 1996 after visiting his sculptor cousin, John Terriak, who gave him some stone and some tools to try out. After successfully selling his second piece of carving, Billy decided to carve full time.   Billy creates intricately detailed carvings and uses natural materials such as stone, bone, antler, ivory, sinew, and baleen (whalebone), and his work often depicts traditional Inuit practices and spirituality.


Here's what Billy Gauthier has to say about Narwhal Hunt:
“This huge sculpture was a piece that I have worked on for many years to bring to this conclusion. It was a piece that I kept on putting aside because I was not sure how to finish it. The sculpture inclusion in the exhibition became the incentive to complete it. Carving the base took a long time and designing the kayaks to balance on the waves required many drawings in the planning stages. Initially, I had intended to have only one kayaker but then to my eye it somehow did not seem balanced and needed a second kayaker. This of course meant more time was required and I had to work long hours to complete this piece in time. There is a lot of detailing in the figures with even their finger nails carved. I have always enjoyed carving faces and hands. I braided all the sinew which was a long tedious job. I am very happy with the result as it captures the power and the drama of the hunt in an exaggerated form. The hunters were finished in pieces of Newfoundland anhydrite gifted to me by (sculptor) Michael Massie when he came to visit my studio this summer.”

Billy's carvings often address problems experienced by the Northern people in their every day lives as the Inuit communities adjust to life in the modern world, such as food insecurity, substance abuse, impacts of environmental degradation and loss of tradition.

Billy's comments on Northern Fridgidaire Diet:
"In the past we lived a traditional life of fishing and hunting and only eating wild “country foods.” Now that has all changed as we tend to buy and eat more groceries imported from the south in our northern stores. These junk foods often include high sugar content drinks, canned and processed packaged foods that are low in nutritional value and often high in saturated fats which have all contributed to our unhealthy diet.

This sculpture has an Inuk wrestling with all those demons that are in his fridge. You will see a milk carton, a loaf of bread, Reese’s peanut butter cups and cans of Pepsi — but I have also added a bottle of liquor and cigarettes that have created additional health problems in the north.

We are seeing an increase in diabetes and lactose intolerance due to this poor diet, lack of exercise and decline in consuming “country foods.” Obesity in Nunavut is 88% more than the national average in the rest of Canada over the last ten years. There are also the associated social problems created with addictions to drugs and alcohol. It is a fact that we have a genetic disadvantage to alcohol and it seems everyone in the north smokes. Canadian Government Health statistics state that 58% of Inuit smoke cigarettes with 46% starting to smoke at the age of 14 or younger. The Inuit never had a traditional ceremonial use of tobacco as an excuse like many other aboriginal peoples in the south.

This is a subject that I have always wanted to carve as “food for thought.” These health problems have always worried me and this was an ideal opportunity to voice my concerns. Even though I go fishing and hunting ptarmigan, rabbits, caribou and seal — I still go to the shops and buy too much junk food.

I admit I am guilty of many of these problems."

"In Inuit culture it is believed that humans and animals both possess souls, which is why all animals should be treated with equal respect. When viewing this piece you will notice both human and owl forms within the mask, in the center of each eye you’ll find a face, in one an owl and the other a human. This was made to show the equality of the two life forms rather than their obvious differences. The mask appears to be speaking, both through the owl’s beak and through a human face that has been carved at the tip of the tongue; this is to symbolize the equal importance of the cry of man and animal. In this day and age we often take note of the problems we face as humans, and all too often the voices of other forms of life go unheard. We as people are not the only ones inhabiting this earth so we need to listen to and respect all voices."
I was fascinated by Billy's intricate carvings and I spent a lot of time just looking and reading the information about him. At his very first solo exhibition a few years ago, he sold all 25 carvings on display in just 18 minutes.... amazing! You rock, Billy!
Posted by Shammickite at 07:36 9 comments:

As I sipped my first cup of coffee out on the deck, this was my view on a very misty morning a couple of days ago. The early sun's rays make the mist glow. A magic time of the day. A couple of weeks previously I had seen 4 foxes chasing each other on the grass in the distance. They have no fear of being near the houses. 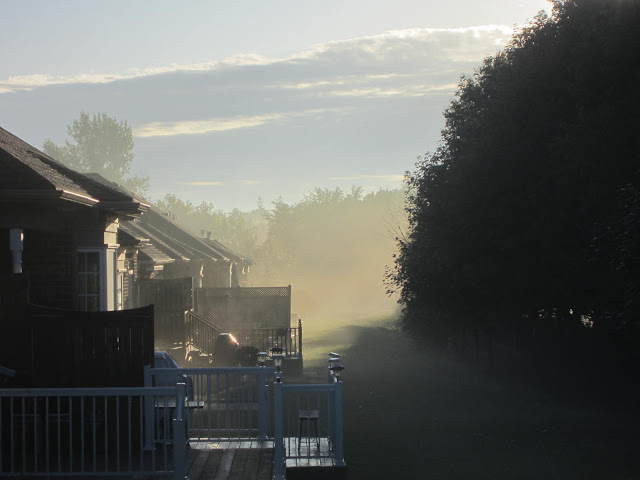 Lots of action going on all summer, but sadly the warm weather sports are all coming to an end.
All four grandchildren played house league baseball this summer. The two older ones played hardball, the two younger ones played softball.
Grandie Isaac's team, the Pirates, got into the finals at the end-of-year tournament, but lost the final game 8-7.... but were doing really well catching up. One more innings would have seen them on top, I'm sure! 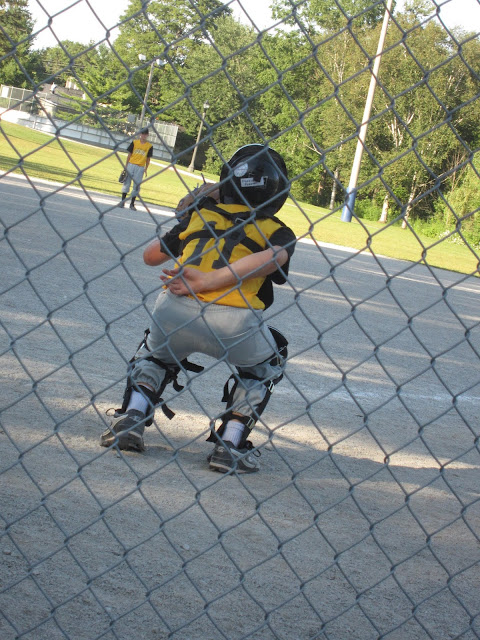 Isaac spent two weeks at a boys Sports Camp in July, and had a terrific time, and is already planning to go again in 2020. It was sports all day every day, just the sort of life he loves. Now he has to persuade Mum and Dad to pay for it! 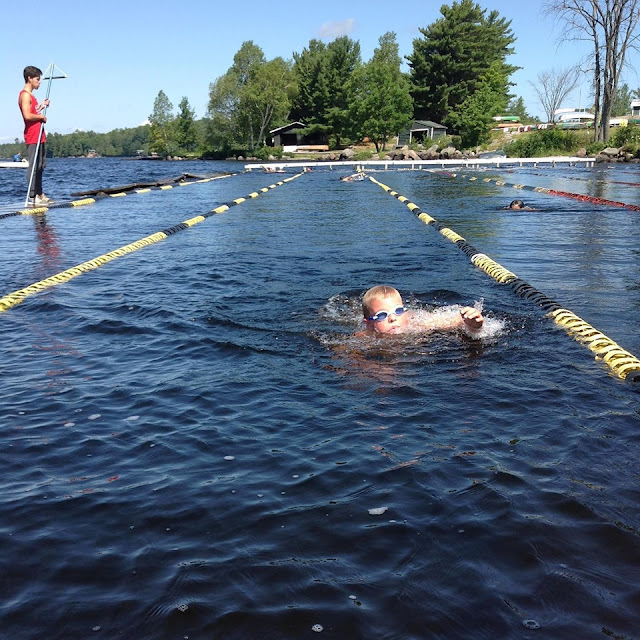 In August the family met at the Rogers Centre (used to be called the SkyDome, I still can't get used to the new name) for a Blue Jays game. We got there early enough to watch batting practice for both teams, but even though the boys (both big and little) begged and pleaded, they didn't get any stray balls thrown their way. 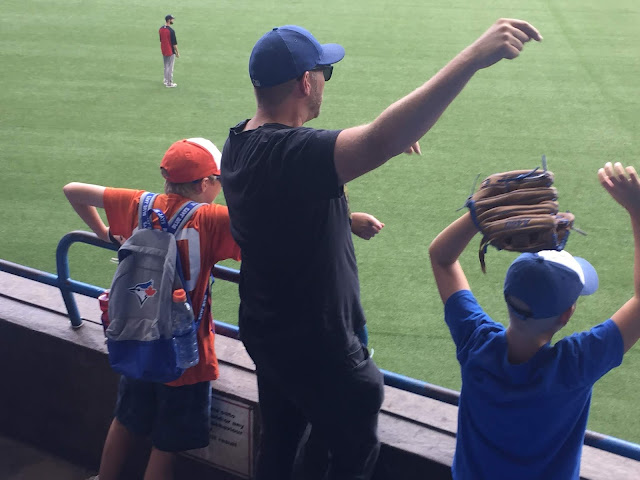 We watched the Toronto Blue Jays play Atlanta, but unfortunately, the home team lost, and we left just before the end of the game, to avoid the traffic jams.  Our beloved Jays have not done well this year, lots of lost games, but just wait.... we are going to be a winning team to watch in a couple of years. That's my prediction!! 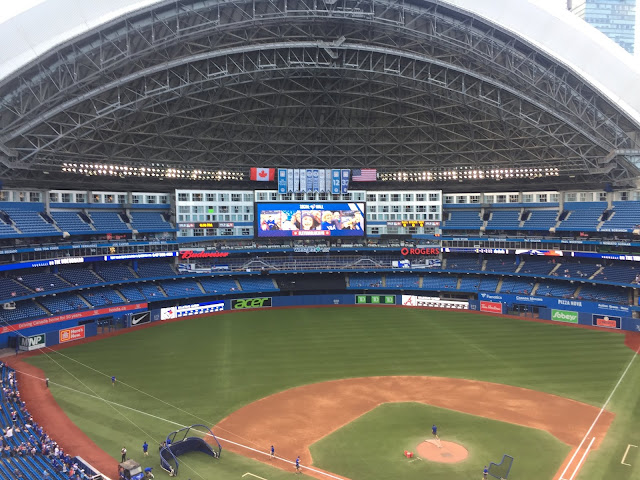 And with summer coming to an end, winter sport is getting started.  We went to the home opener ice hockey game for the Stouffville Spirit, the local Junior A OJHL team. After watching baseball all summer, a game that's mostly slow and sedate with moments of wild panic, I was surprised by how fast and furious ice hockey can be!  It was a great game, but unfortunately, ended with a loss for the home team. 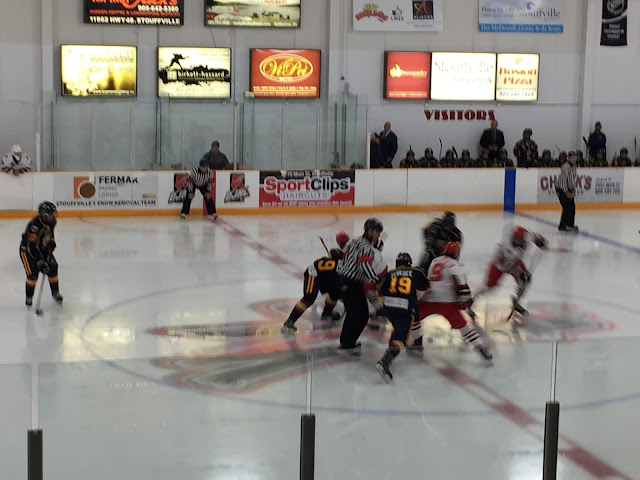 All the grandies will be getting their hockey gear together ready for the season to start at the end of September... they will all be practicing and playing every weekend so I'll be spending lots of time in the local arenas.
Posted by Shammickite at 08:45 10 comments:

There was an unexpected guest welcoming me home a couple of days ago. He was resting on the inside of the window frame. He must have sneaked in through the open door, as all the windows have bug screens. 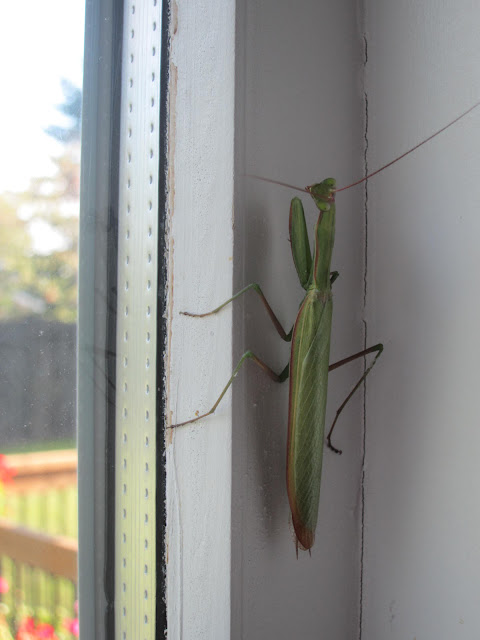 He (or possibly she?) is a green Praying Mantis, a very strange insect indeed. They have triangular heads with bulging compound eyes, three smaller eyes and a pair of antenna supported on flexible necks. They can see in 3D with all those eyes. They can turn their heads almost 180 degrees. Their front legs are enlarged and adapted for catching and gripping prey. 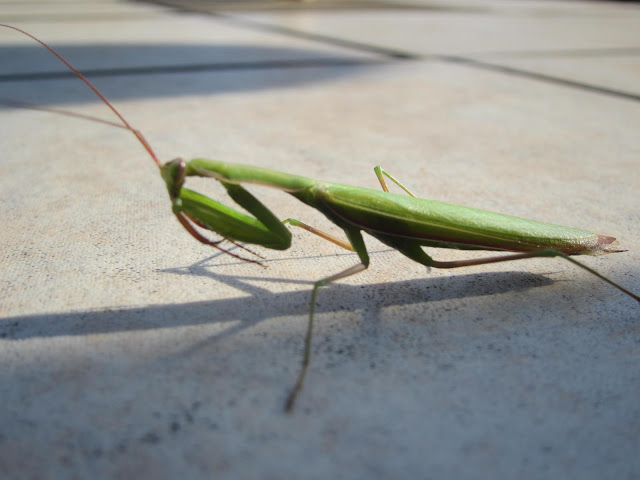 I gently caught him in a kleenex, carried him outside and put him on the patio table where I could get a good look at him.... wow, what a weird creature. 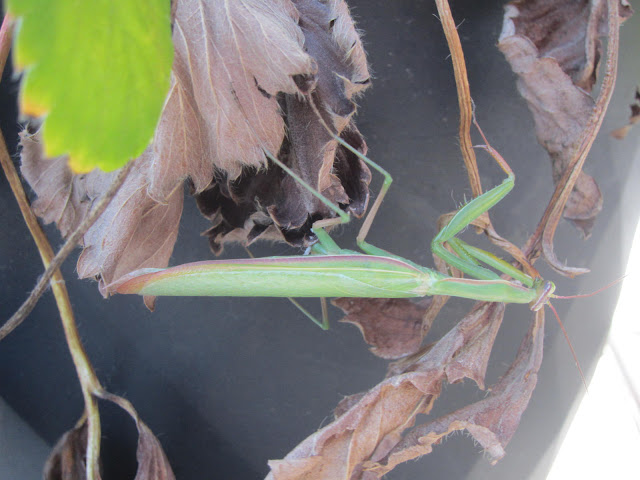 I transferred him to the potted strawberry plant, and from there to a geranium.  The Praying Mantis is a predator, catching its dinner ambush style, moving fast and furious towards some unsuspecting live insect. It grips the intended food with the spikes on it's front legs.
A PM this size would go for insects, but they are capable of killing prey 3 times their size. The larger varieties have been known to eat humming birds, frogs and lizards. They like their food sill squirming! 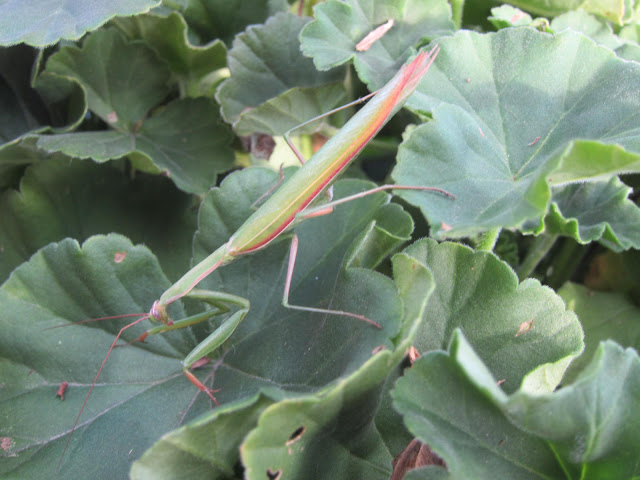 And if you are a male PM, watch out. Your lady friend might bite your head off in the process of making babies. Well, a girl's gotta keep her energy up to look after all those eggs!
Posted by Shammickite at 14:35 22 comments:

Yes.... TessaDog is 12 years old, her birthday was yesterday. She's such a party animal! 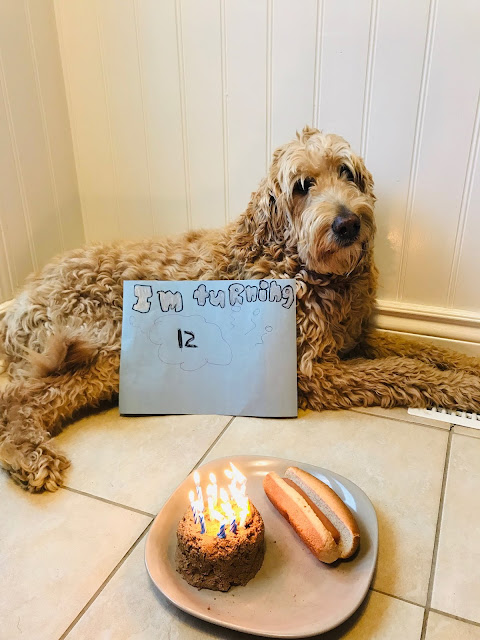 Happy Birthday to an old mature lady who thinks she is still a puppy!
Posted by Shammickite at 07:35 22 comments:

It grows wild in the hedgerows in the summer and attracts the bees, and I think it's such a lovely splash of sunshiney yellow.
Tansy is a perennial flowering plant in the aster family, native to Europe and Asia. but thrives in North America, probably introduced by the settlers arriving from Europe as long ago as the 1600s. In some places is considered a noxious weed. It's also known as Bitter Buttons, Golden Buttons or Cow Bitter. 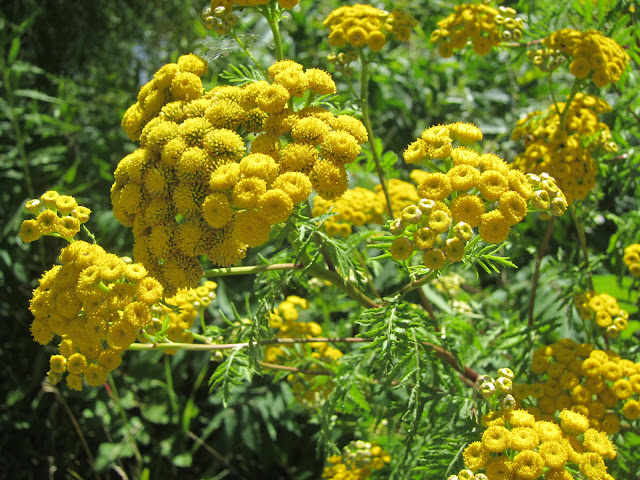 It's had many medicinal uses including treating worms, digestive problems, fevers, rheumatism and measles. You can even use a solution of Tansy as a face wash, or bathe in it to ease joint pain.  It has been used as an insect repellent, and it was packed into coffins, wrapped in funeral winding sheets, and Tansy wreaths were laid on the dead.  It can also be used as a dye. A useful herb indeed.
Tradition says that if you plant it by your kitchen door, you will never be troubled by ants in the kitchen.
Posted by Shammickite at 14:33 21 comments:

Happy September!
A visit to Fred's Record Store in St John's..... a selection of local music, including the late and great Ron Hynes. Never heard of him? He was regarded as one of Canada's premier singer-song writers, and many of his songs have become part of the fabric of Newfoundland culture. He was Newfoundland's poet. He passed away in 2015, far too soon. 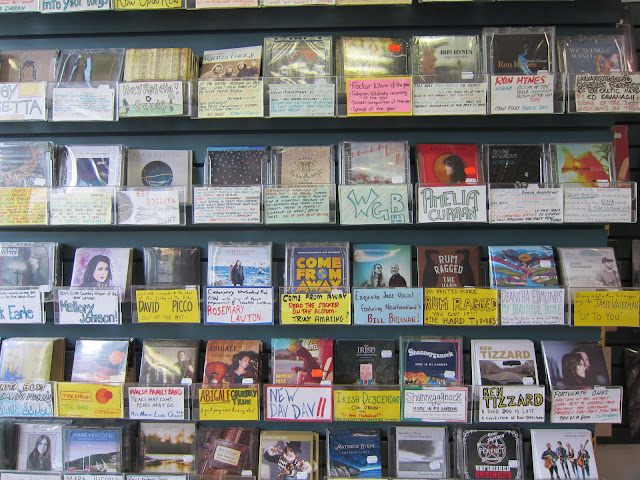 But if you prefer your music live, a visit to the Rocket Bakery on Water Street on a Tuesday lunchtime.... traditional tunes being played around the table by some of St John's best known musicians. 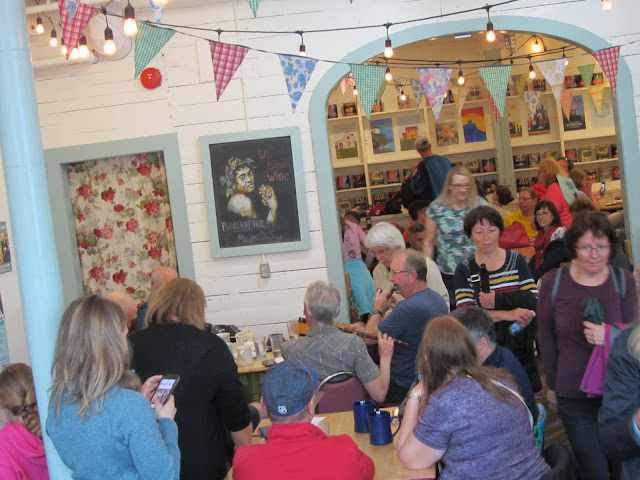