The sewing machine came into use at Christmas. I made all three of my grandsons Superman capes for Christmas. Black with a yellow felt Superman logo.
Callum wears his to his skating lessons.
Emma got a special cape.... red with a pink felt Princess Crown on it. Max loves dashing through the house wearing the Princess cape more than his own, so Emma has to wear the Superman.
And the capes are reversible.... red on the other side with their initial and a lightning bolt. The big boys seem to like the red side best. 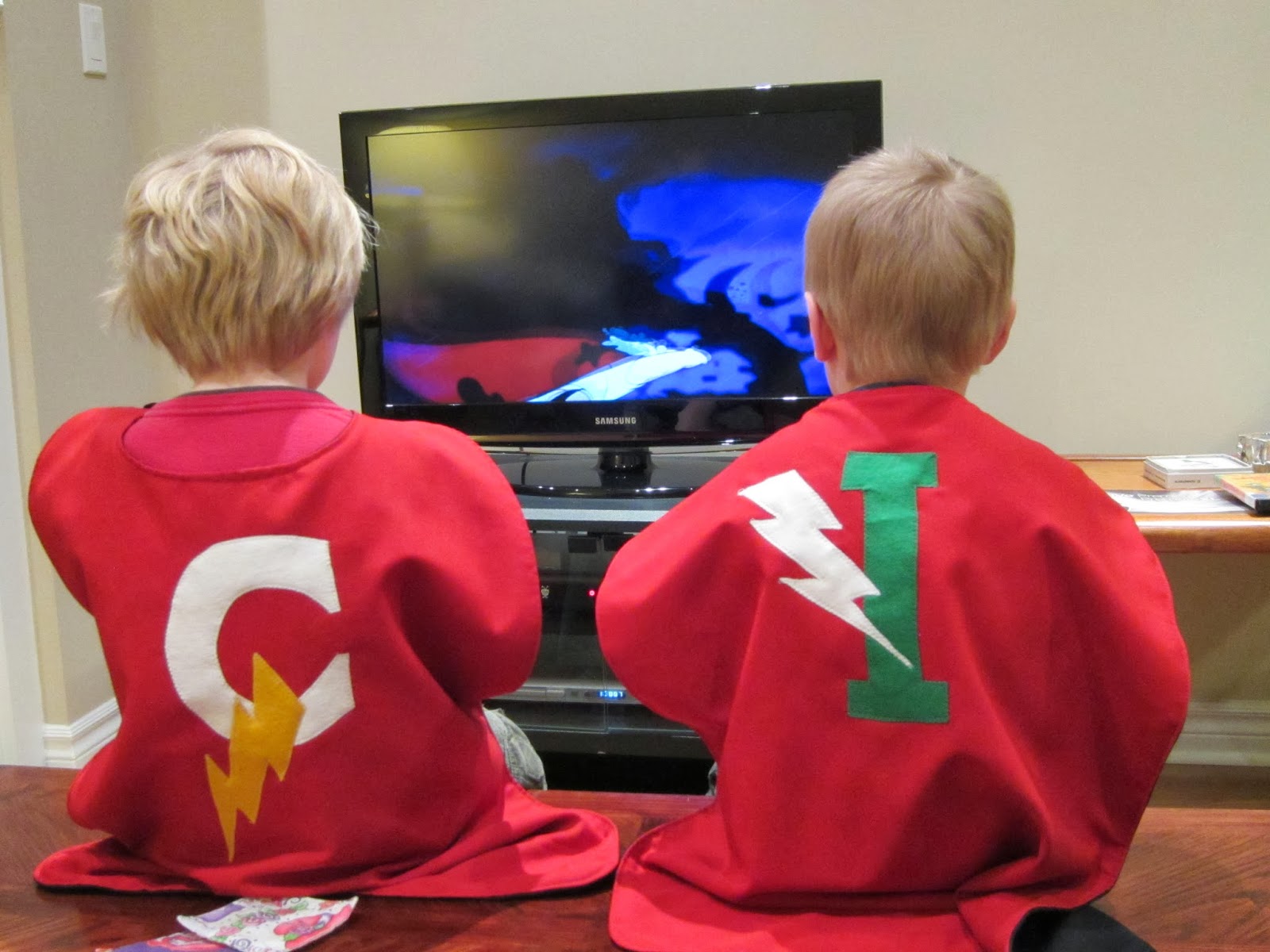 SuperCallum and SuperIsaac taking a break from their exhausting SuperHero activities.
Posted by Shammickite at 17:27 14 comments:

Back to Art School 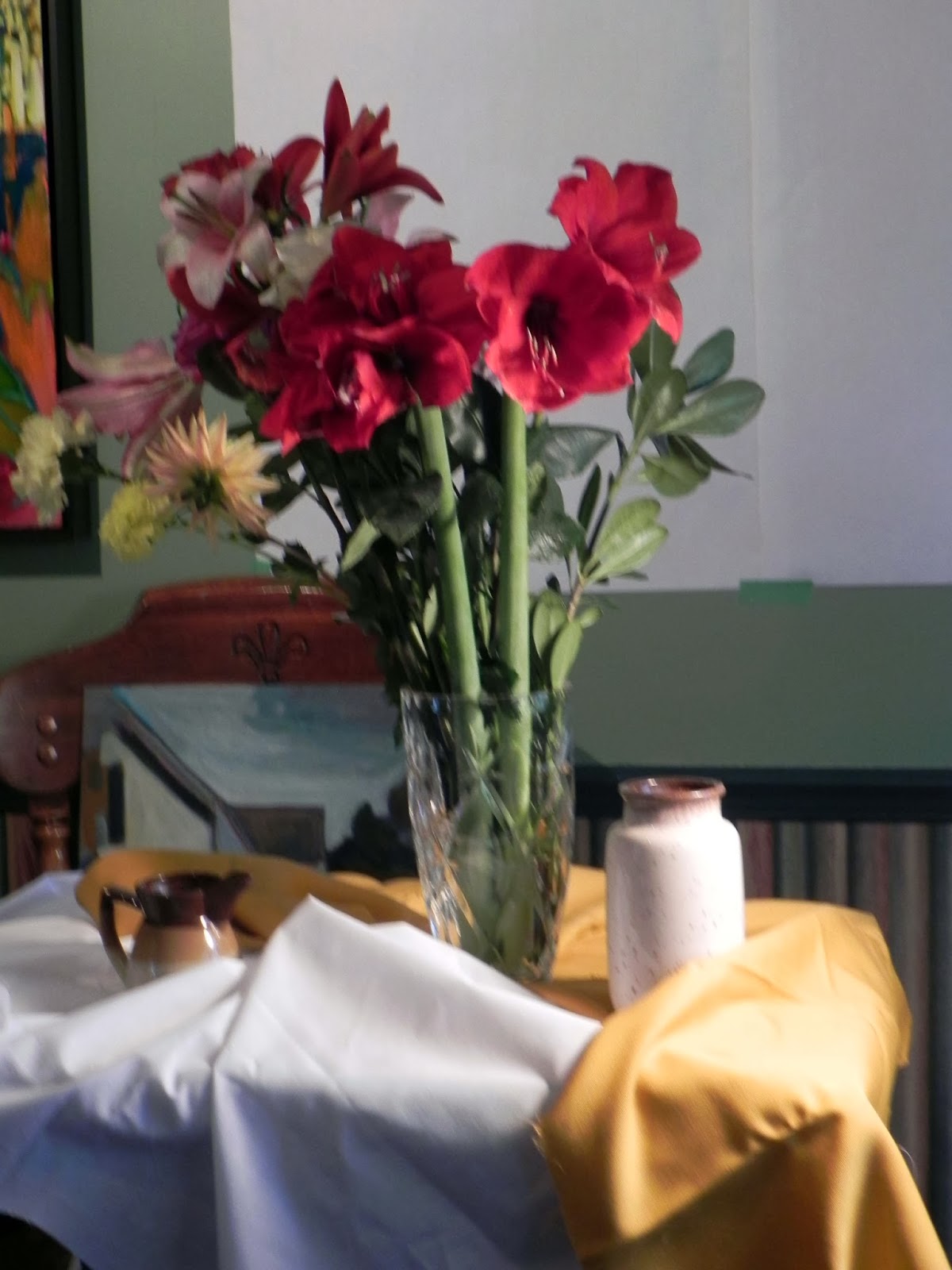 I attended a 4 week acrylics painting class with three friends back in November. I've attended classes with this instructor a few times and I really enjoy the way he instructs the class. Lots of technique, composition and colour theory, and then the practical part.... create a painting using everything we had learned.

He normally encourages his students to paint whatever they choose, usually from a photo that they had taken themselves, but this time there was a fixed subject matter.

Our mission this time.... our subject was a still life, this bunch of rather faded flowers, plonked into the vase, no flower arranging, just paint whatever you see and interpret it however you like. 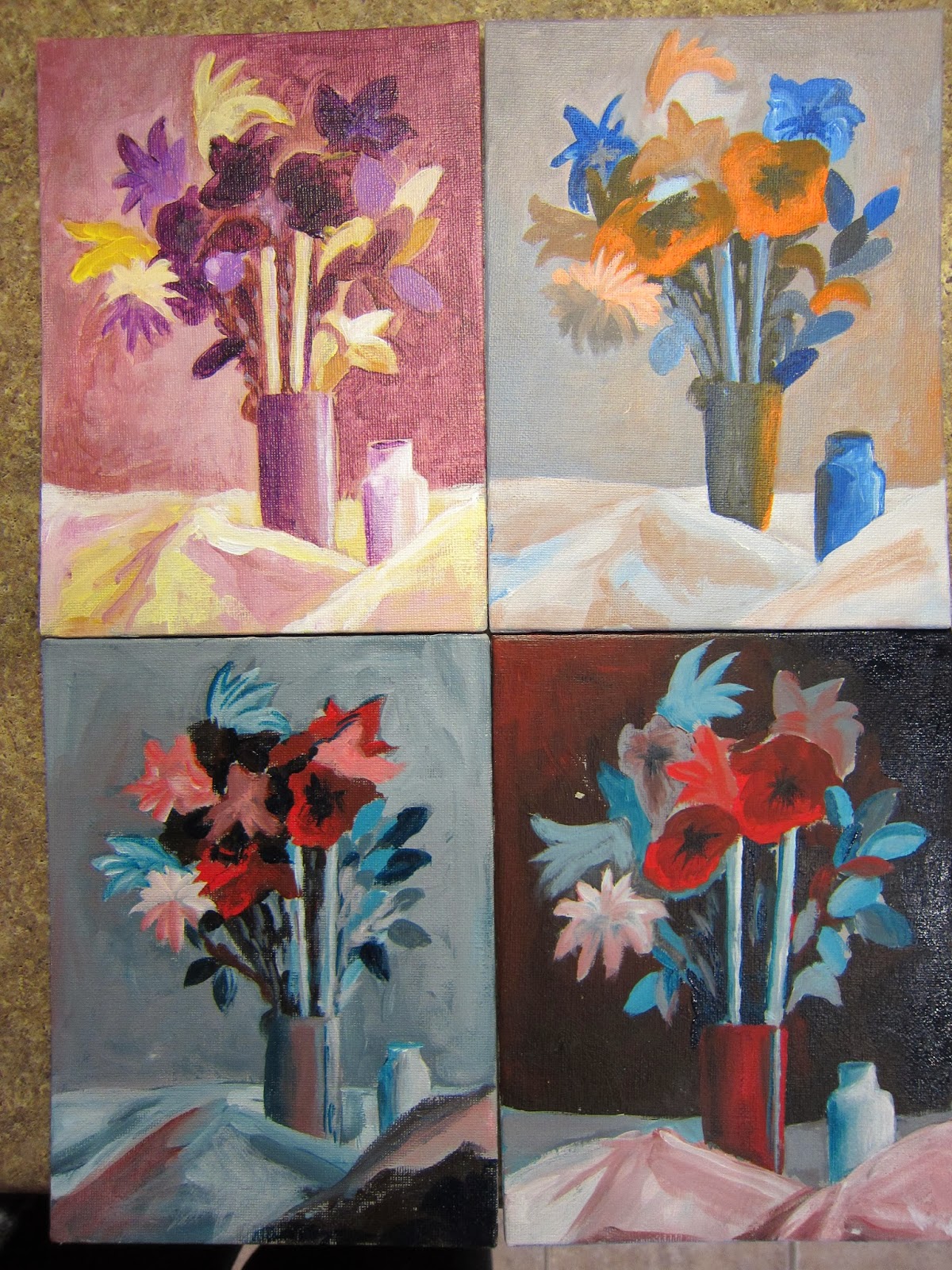 Step one, a quick pencil sketch of the basic shapes, and then add in the darks, lights, and the grey shades in between to determine the values. And then choose a complimentary colour scheme using the colours opposite each other on the colour wheel, and do some preliminary colour sketches.

I did four quick paint sketches on 6" x 8" canvases because I just could not visualise how I wanted my painting to look. That's always the hard part for me, getting started and making a decision on the direction of the finished piece.

We worked on our paintings at home and at the instructor's studio, and even though we were all painting the same subject matter, we produced four paintings that were radically different. This is mine..... 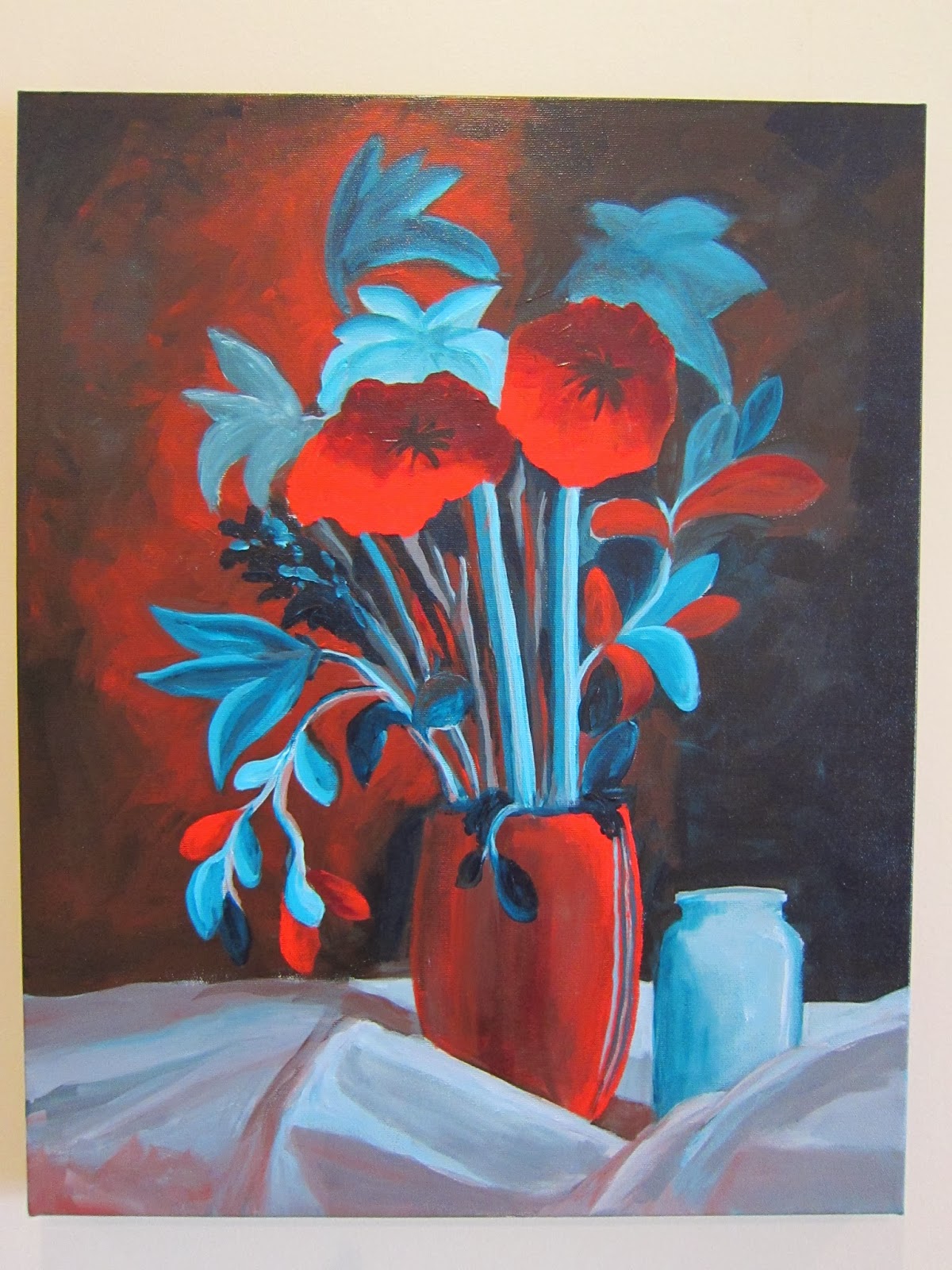 .... using only three colours: Phthalo Turquoise, Cadmium Red and Titanium White. I'm still not sure if I like it. It looks a bit like one of those "Velvet Elvis" type paintings to me.
Posted by Shammickite at 01:00 13 comments:

Invasion of the Gingerbread Men

First you line up an assortment of sweets and candies, then you get a bowl of the stickiest, sweetest, surgariest icing that you can find, dollop some icing on your gingerbread man, and stick the candies on. And don't forget to lick your fingers. 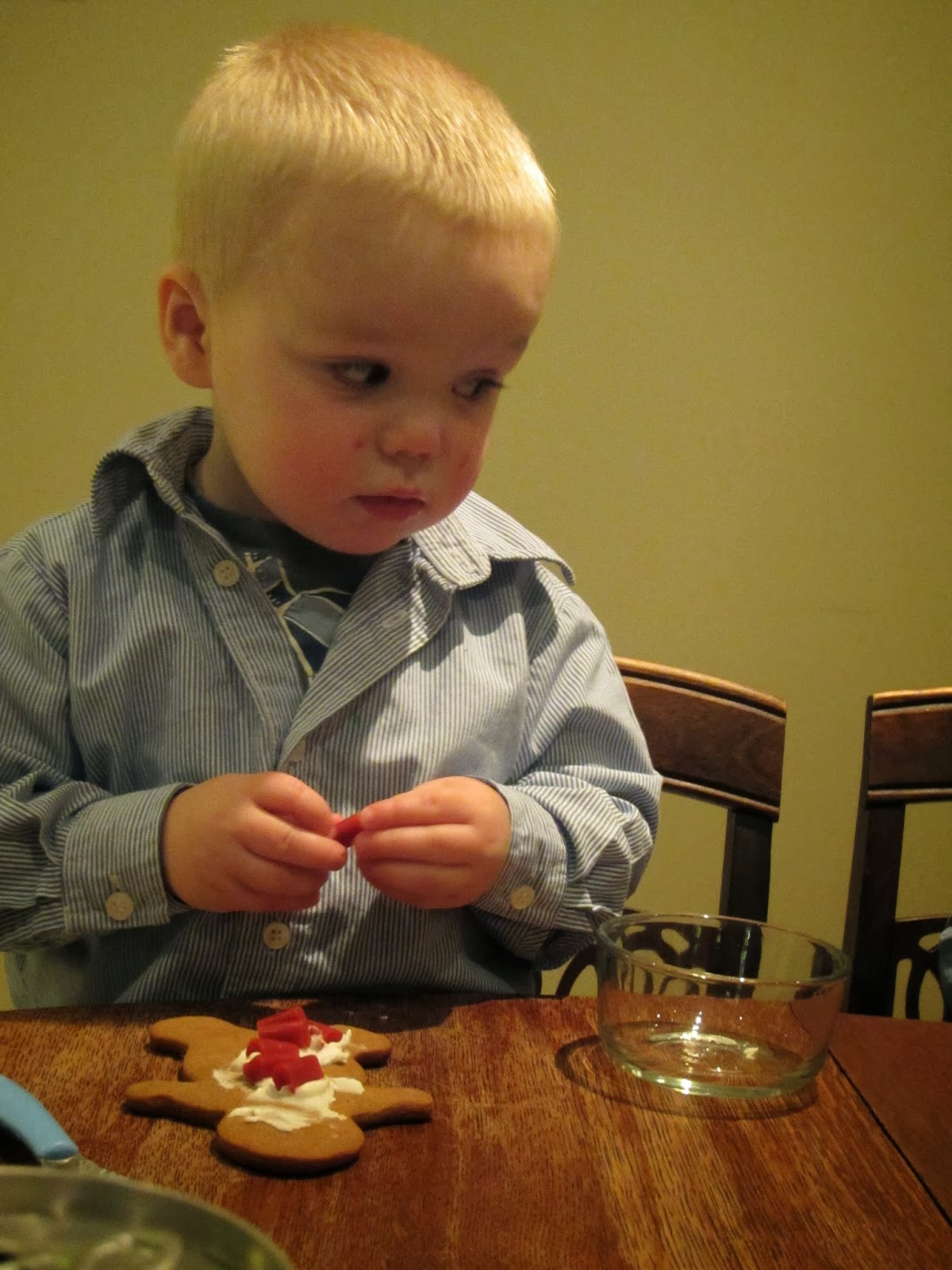 Max has his eagle eye on whatever's going on beside him.
He covered his gingerbread man with red liquorice, and he doesn't even like it! 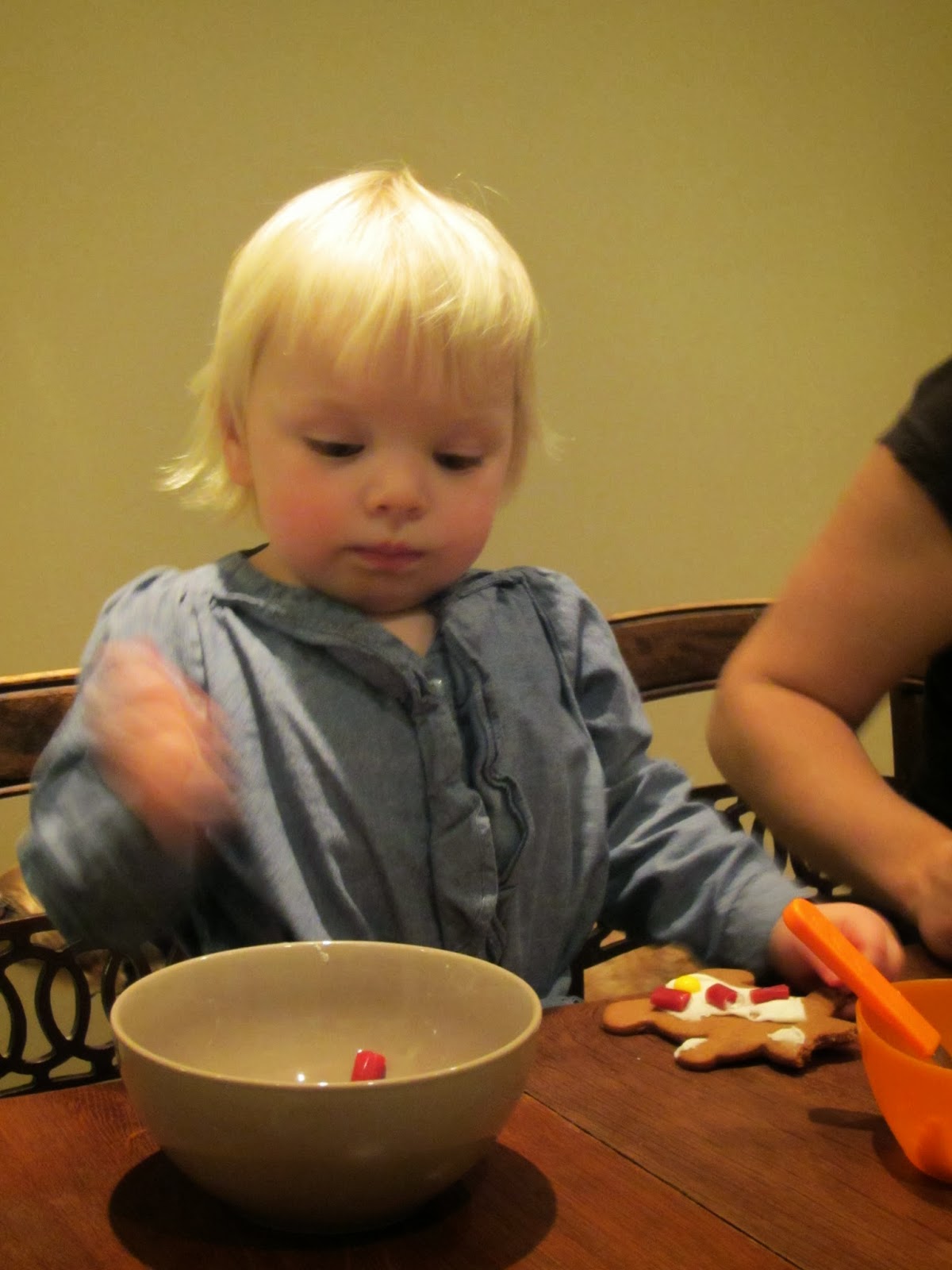 Emma was very industriously decorating her gingerbread man, but it looks like part of his head is missing already! No, no, not my head! (spoken in a gingerbread man kind of voice). 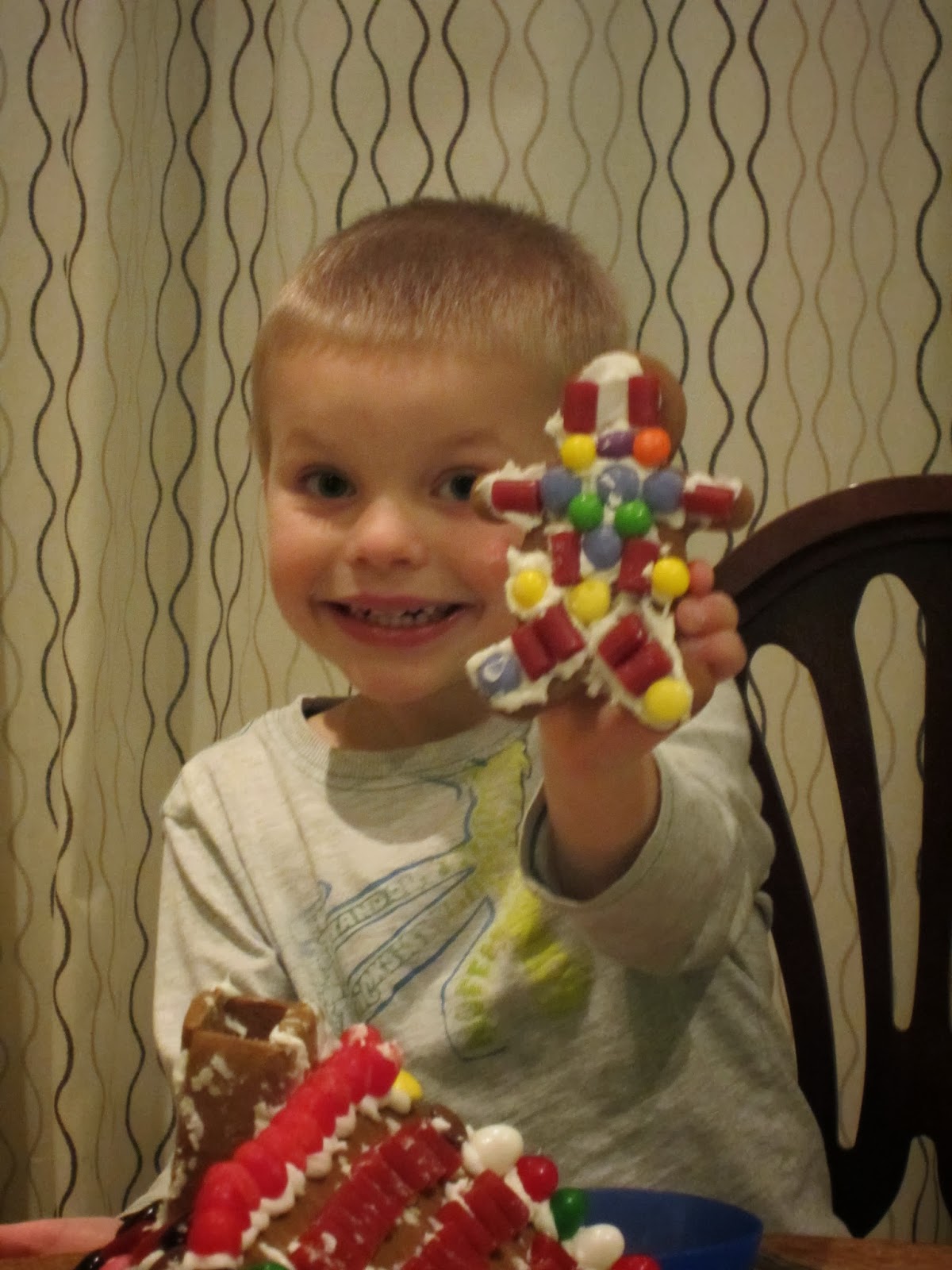 Isaac made his gingerbread man into a gingerbread robot ninja.
(He was outraged that I called it a robot.)
But gingerbread robots ninjas don't last very long, and this one was no different.
It got eaten soon after completion.
Posted by Shammickite at 16:00 6 comments:

December was a hectic month totally taken up with shopping and baking and Variety Show rehearsals and trying to stay warm during diabolical bad weather, and so I didn't post much about Christmas. In fact, I'm always relieved when the Holiday Season is over and life can get back to a normal routine. But Christmas memories remain. 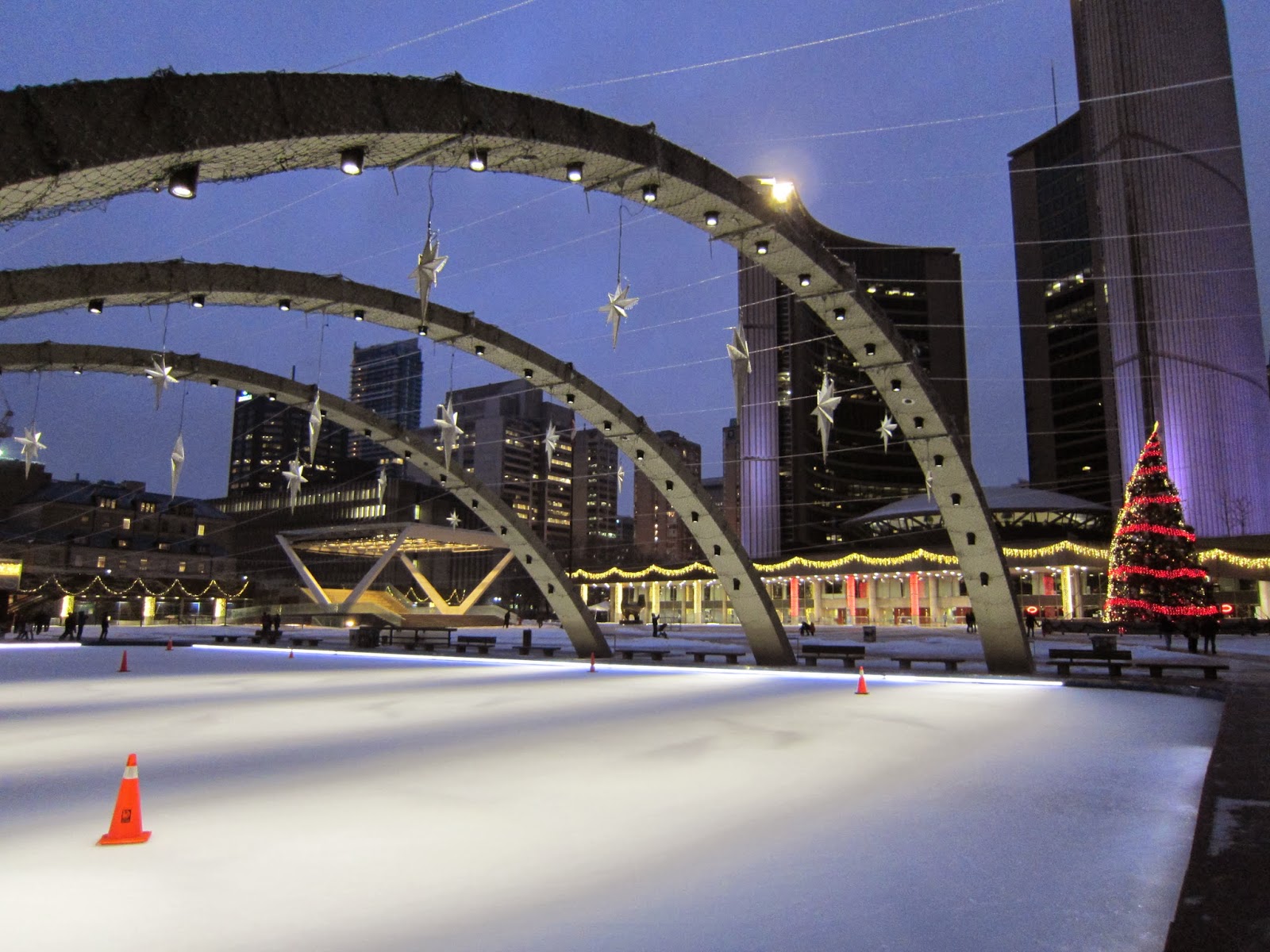 The skating rink (in summer it is a reflecting pool) in Nathan Phillips Square outside Toronto City Hall. The rink was closed.... big notices saying telling the public "Skate at your own risk" due to chunks of ice falling from the overhead arches. 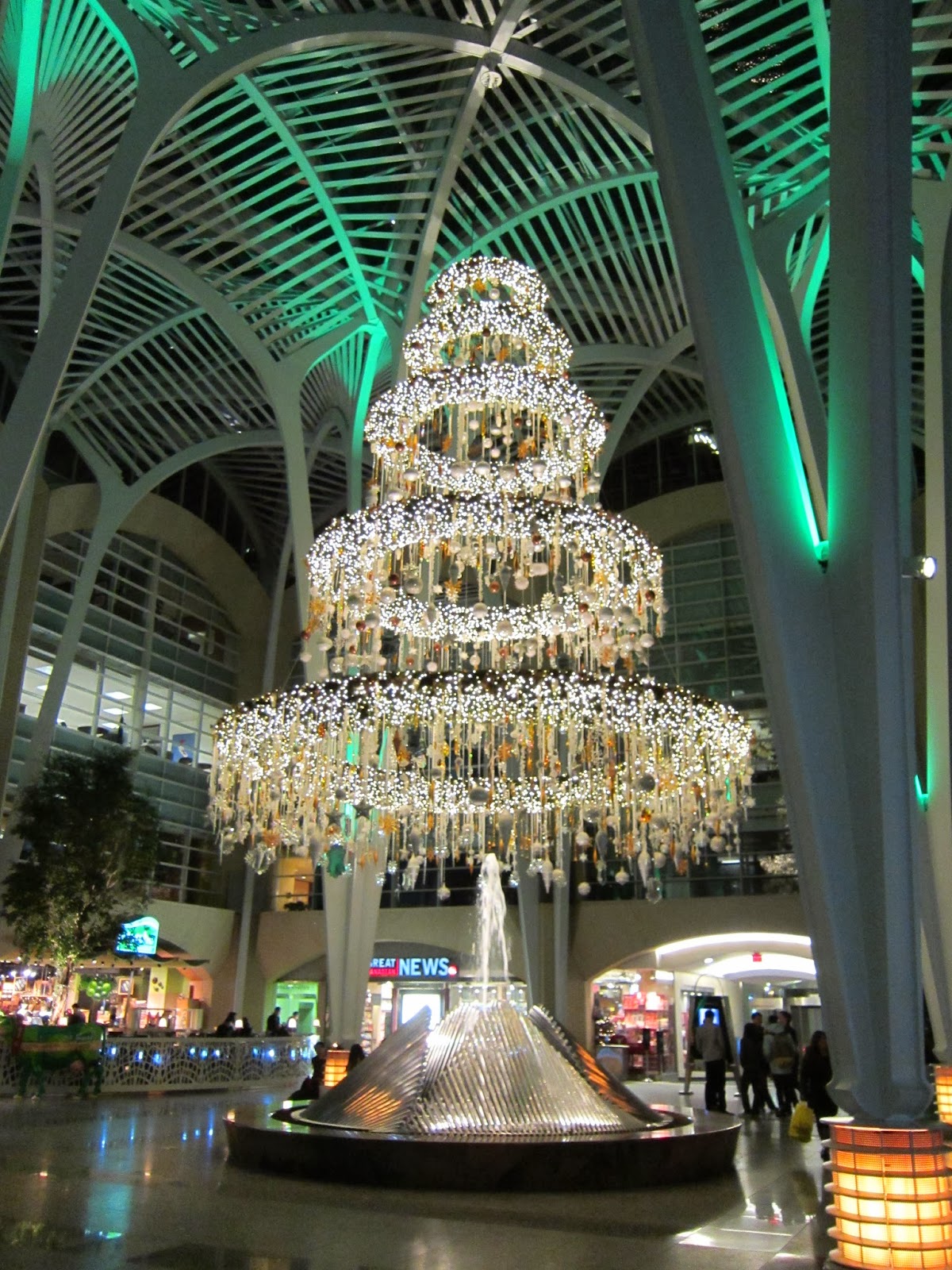 Some of the amazing Christmas decorations at Brookfield Place. Mind boggling! 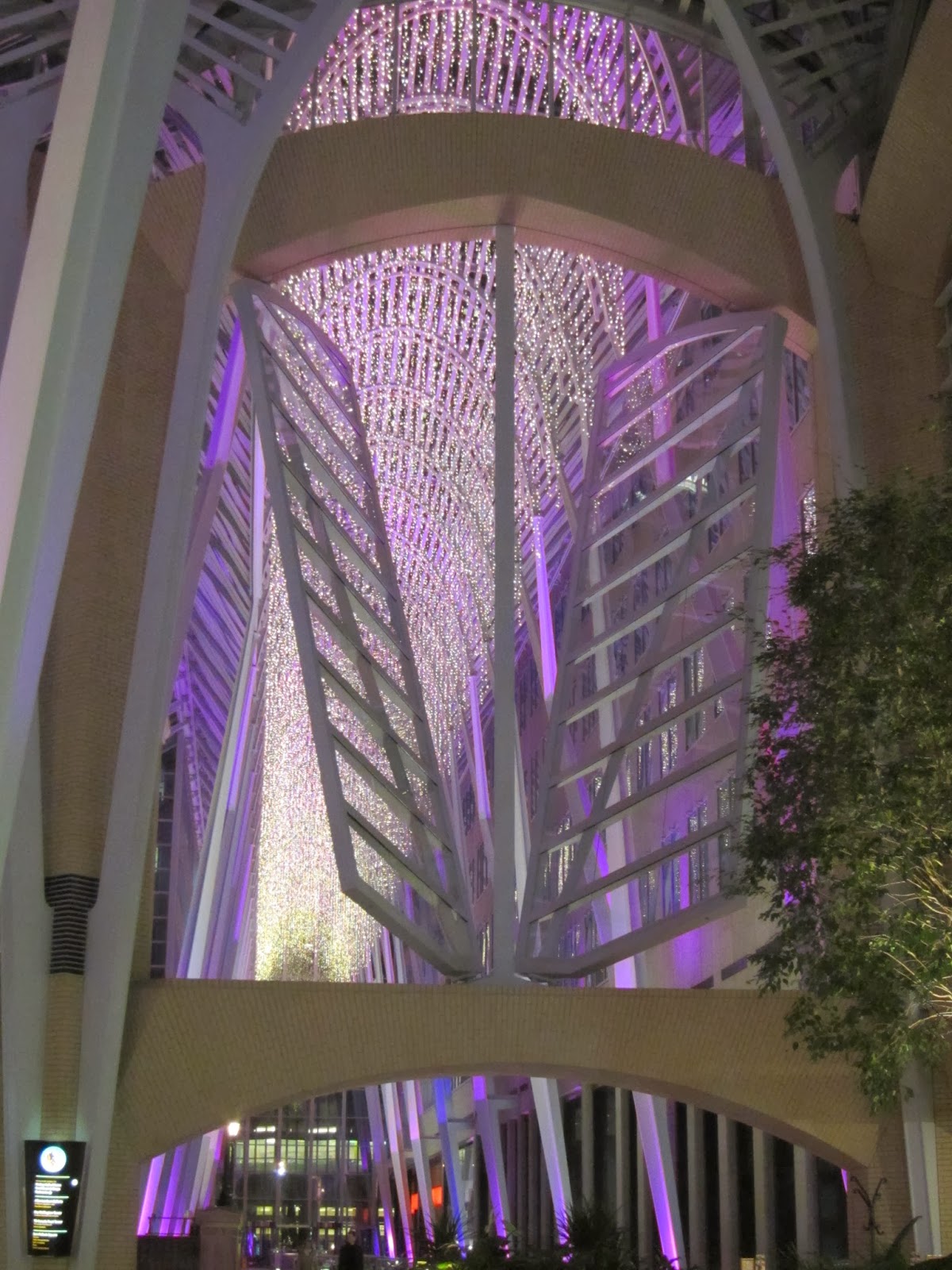 And more Christmas sparkle looking up into the ceiling of the Chrystal Cathedral of Commerce inside Brookfield Place. 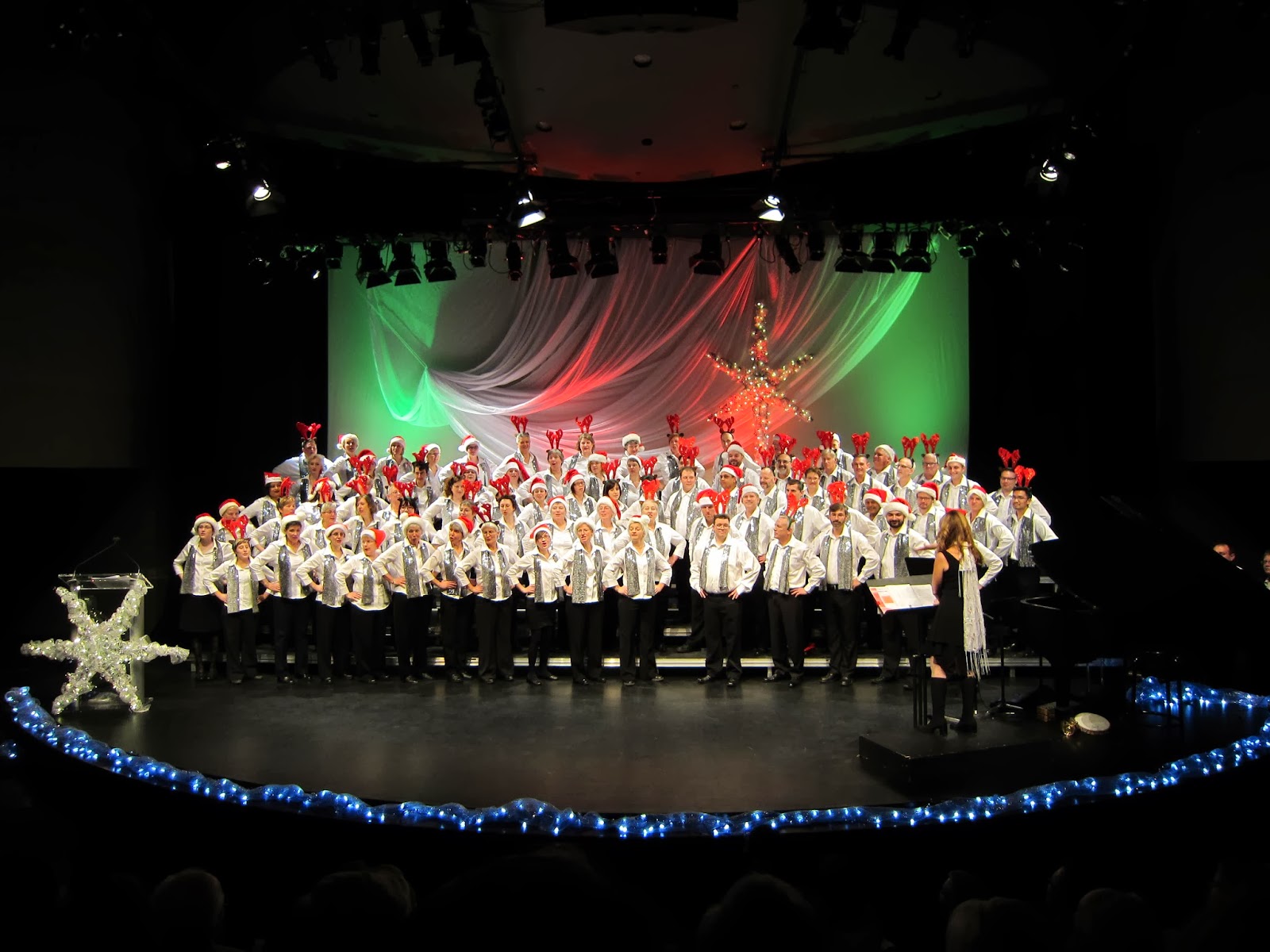 The wonderful "Lights of December" Holiday Concert by Singing Out, Toronto's LGBTQ Community Chorus at the Jane Mallett Theatre. Great holiday music with a quirky touch, loved it! So much fun to see friends up there on the stage, singing their hearts out. 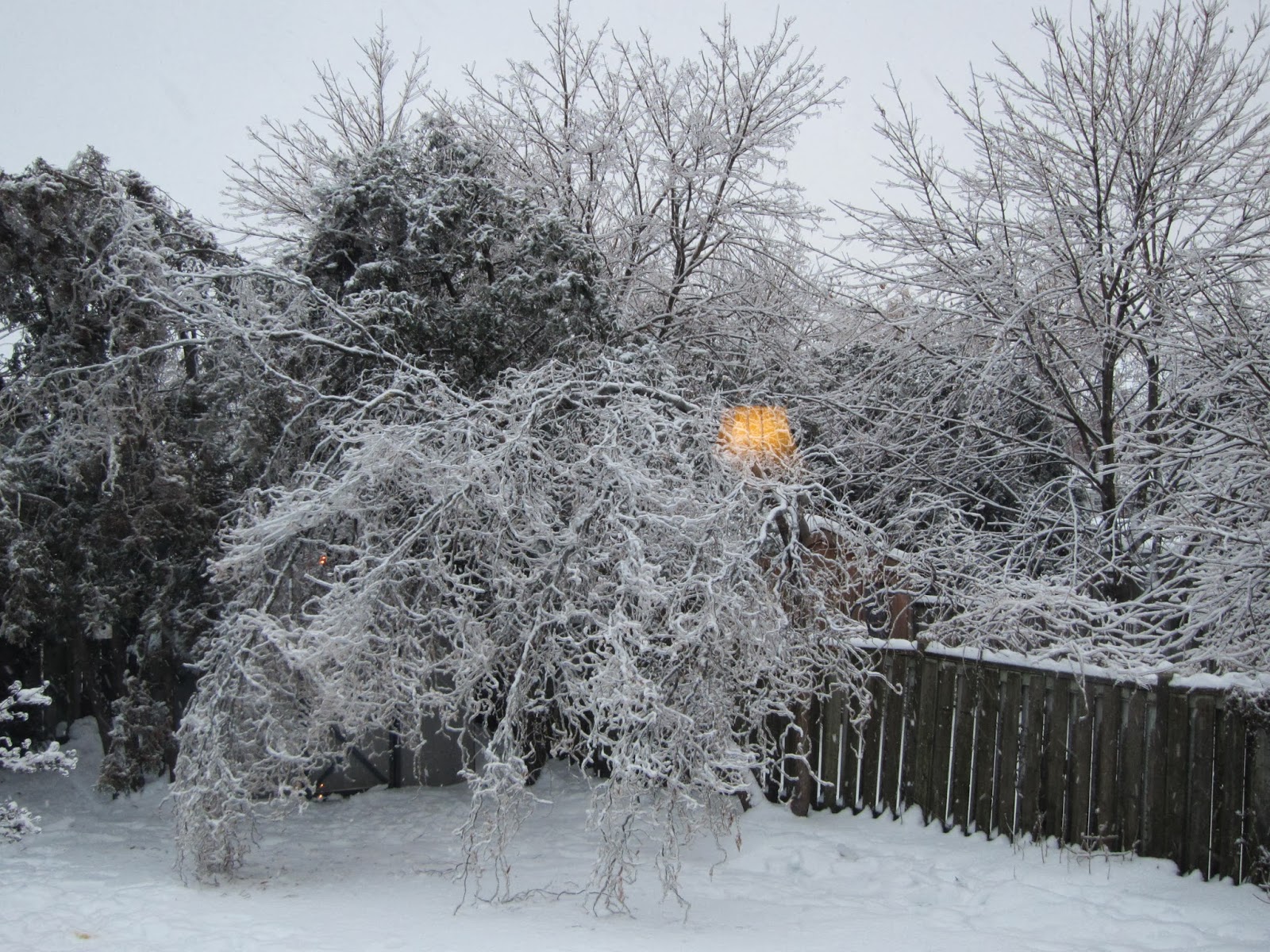 And the Ice Storm! This beautiful corkscrew hazel tree in YoungerSon's back yard normally stands 35 feet high, but here the top branches are touching the ground due to the weight of the ice. Amazingly, now that the ice has melted, the tree has bounced almost upright again! Thank you, Mother Nature! We thought that tree was a gonner.
Posted by Shammickite at 01:00 5 comments:

Something Very Fishy Going On Here

A few days before Christmas we made our annual family pilgrimage to downtown Toronto to see the Pantomime. Not such a large family group this year. Callum was the only child in attendance, as Isaac couldn't be there, and the twins are still too little.
The annual Christmas Pantomime is a time honoured tradition in Britain, usually vaguely following the theme of a nursery story or nursery rhyme. Christmas just wouldn't be Christmas without a visit to the Panto. 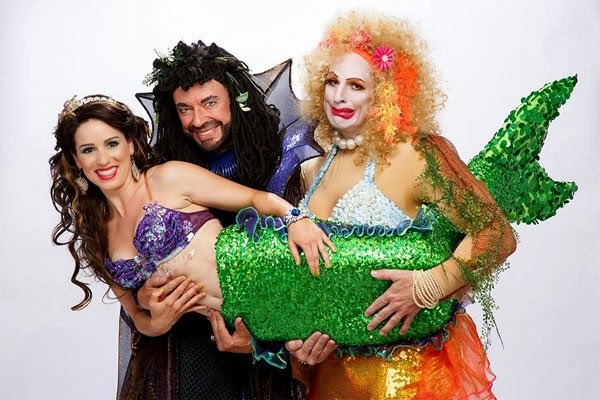 This year's offering was "The Little Mermaid - Ontario's O-FISH-AL Family Musical"..... definitely not the sweet Walt Disney version but something far more fun. Lots of audience participation, booing the baddies, cheering the goodies, shouting warnings... "Behind you! Behind you!" No need to keep the kids quiet in this production.

Ross Petty took the form of the evil fish monster Ogopogo who lives at the bottom of Lake Ontario... and he certainly makes a very believable bad guy. He was almost BOOOOed off the stage and he loved every minute. Ogopogo wanted to develop a Marineland Casino and nightclub featuring all the mermaids, and was eventually defeated by Panto regular Dame Plumbum von Botox, the mer-maiden aunt of the Little Mermaid herself, and the underwater residents of the lake, including Shelly the Shrimp, Carl the Clownfish and Sponge-Bill-Triangle-Pants. 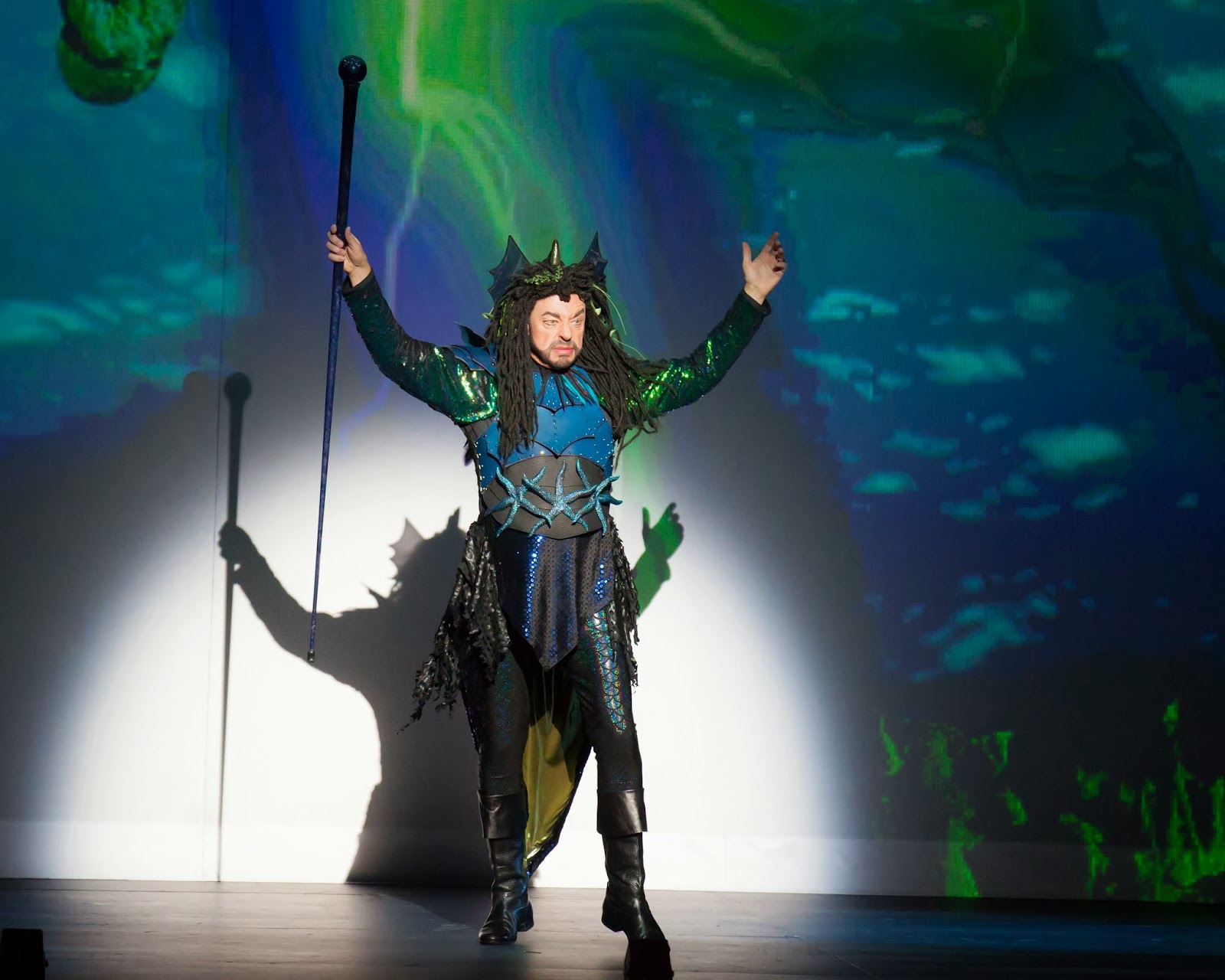 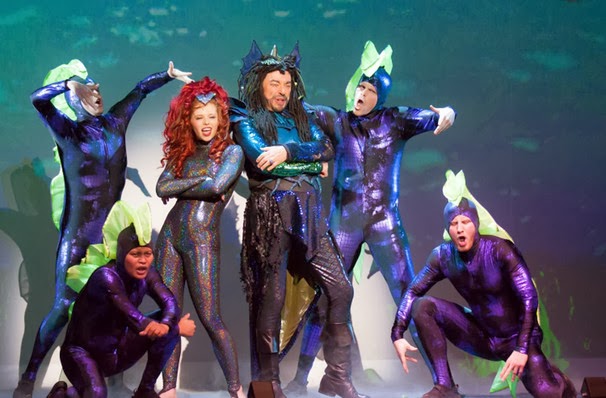 Lots of slapstick belly laughs for the kids, lots of slightly off-colour references to keep the adults laughing. Lots of dancing, singing, colourful costumes, talented comedy.
Will we go again? "Holy Carp!" You bet we will, I can hardly wait till next year!
Posted by Shammickite at 15:13 8 comments: 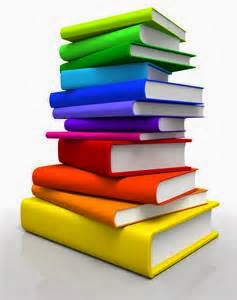 Can you recommend any books I should read in 2014? I have already started Behind the Scenes at the Museum by Kate Atkinson (reading for the second time), and Heartbreak Hotel by Deborah Moggach, and The Buffalo Soldier by Chris Bohjalian are sitting on my bedside table.
Posted by Shammickite at 01:00 6 comments: 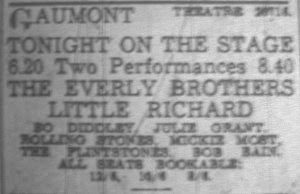 Phil Everly died today. And I feel sad.
I loved the music of the Everly Brothers. I didn't have a record player when I was young so I had to rely on listening to them on the radio. Radio Luxembourg, when I could tune it in, and then Radio Caroline.

But now I have lots of their songs on my MP3 player and sing along with them regularly. I love their harmonies. 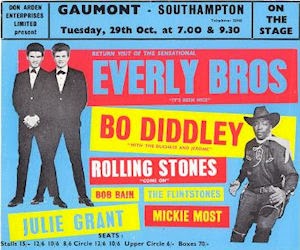 My boyfriend John took me to see them at the Southampton Gaumont back in 1963. No, that's not actually my ticket, I found it on the internet. But that's the day I went. I wish now that I had kept the programme. 12/6 was a lot of money for a concert ticket. 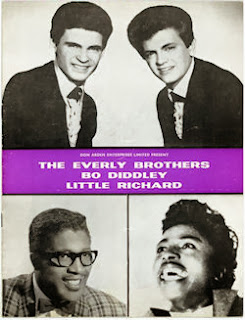 The Everly Brothers sang all their big hits, but it was hard to hear them for all the screaming girls. Well, I suppose I must have been screaming too.... that was how we showed appreciation for the bands back then. I don't remember John being too impressed with the screams.

Also on the bill was Little Richard... he took his shirt off and sat on the piano playing the keys with his bare feet. (more screams). Good Golly Miss Molly!  Apparently Bo Diddley was there too, although I don't really remember him. But look at the supporting band.... yes, it was the Rolling Stones! (even more screams).

Phil, so sorry you are gone, taking a bit of my youth with you. I'll play some of your songs in remembrance of that terrific concert back in 1963.
Posted by Shammickite at 20:15 7 comments: