Using gelli prints made earlier this month as covers for some small sketchbooks, using some of my mother's embroidery thread to sew the pages. Coptic stitch looks complicated but really it's easy.

If life ever gets back to "normal"  these little books could be for sale at our annual Art Show. 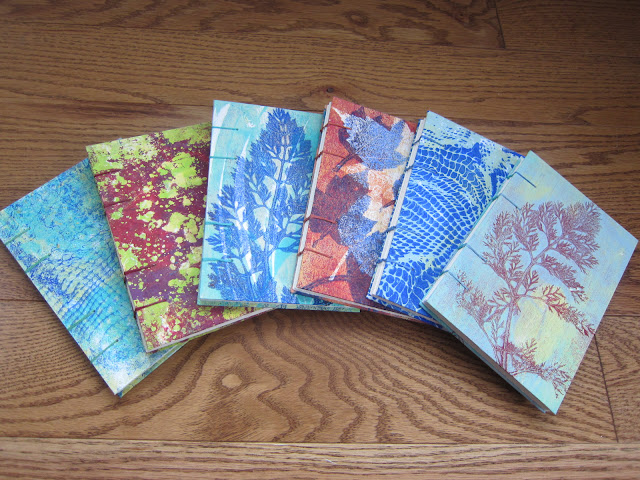 No need to describe the fun being had here.... new Nerf guns! 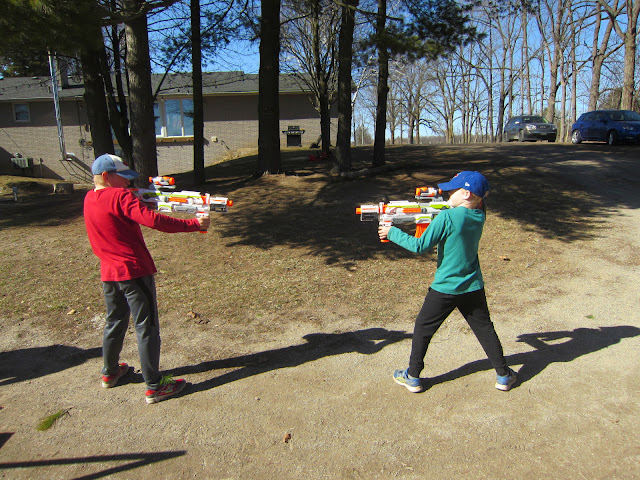 I've been using up pre-painted canvas boards and playing with paint again, with varied results.  None of my efforts are any where near anything I might like to frame and hang on the wall, but it keeps me sane and busy and otherwise out of trouble during the endless Covid days. Although the restrictions here are easing up quite a bit, there are still too many new infections reported, many of them attributed to the variants, and new deaths every day. 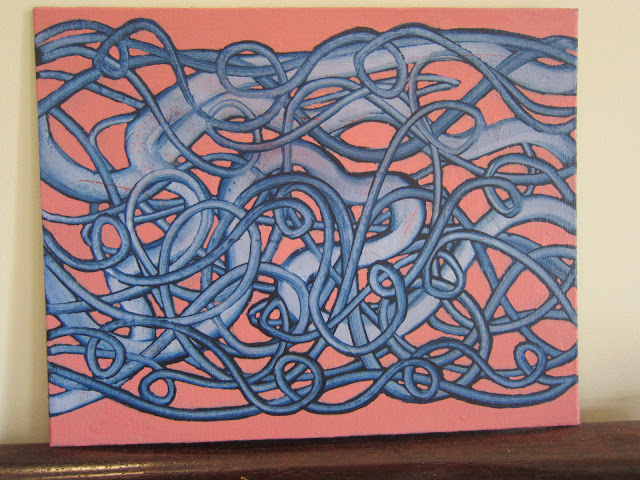 I've also completed the needlepoint project that I started sometime in the 1990s. It sat in a sewing bag in the basement for a long time before I retrieved it. Now I have to decide what to do with it. Perhaps a 12"x12" frame? 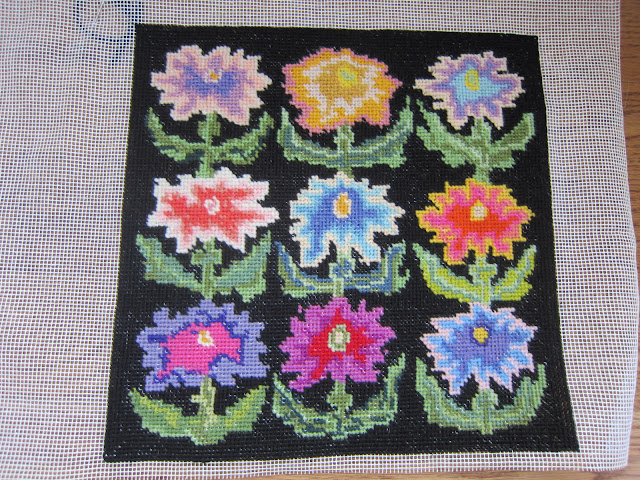 Now that the clocks have changed to the daylight savings, I was up early enough to see the sun coming up behind the trees. That doesn't happen often. I mean me seeing the sun, not the sun coming up. That seems to happen on a regular basis whether I'm there to see it or not. 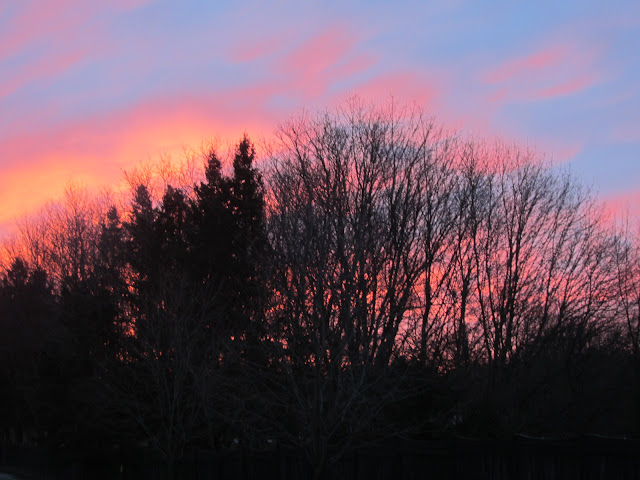 And today is a big day for me.... the hair salons are finally open and I am going to get my first proper haircut since the middle of November. I can hardly wait!
Posted by Shammickite at 12:21 20 comments:

This is the latest result from playing around with acrylic paint, rubbing alcohol and plastic sandwich wrap. Up in the top left corner there's a bluish shine, which is an acrylic paint colour called "interference blue".  It looks very pale pink in the tube, looks white when its painted in, and then has that weird bluish glow. Strange stuff. I wonder what it's made of? 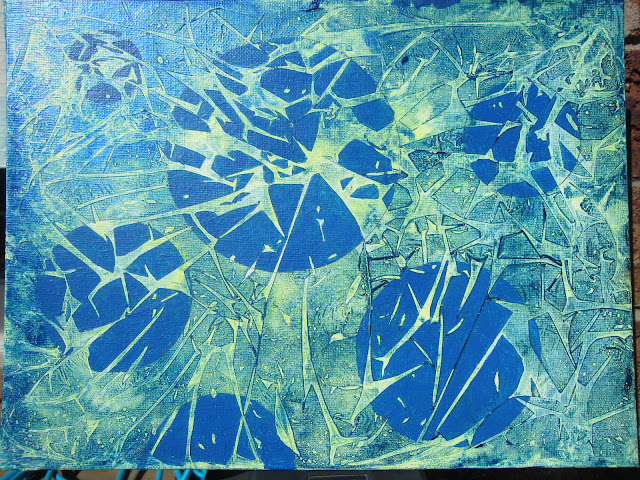 And the MQ (see the post title). The MQ is the Meghan Question. I watched most of the Harry and Meghan and Oprah interview last weekend (missed the first half hour), and I'd love to get some comments on what bloggers thought of it. In my opinion, it's all very sad. The idea of marrying a handsome Prince, and becoming a beautiful Princess didn't work out exactly as Meghan had planned.  It was obvious from the start that a divorced mixed race American TV actress wasn't going to fit into the Royal family easily. So now Harry's estranged from his father, and his brother and family, doesn't have a job, and is living far from home. A shame. But that's just my opinion. What do you think?
Posted by Shammickite at 14:24 14 comments: 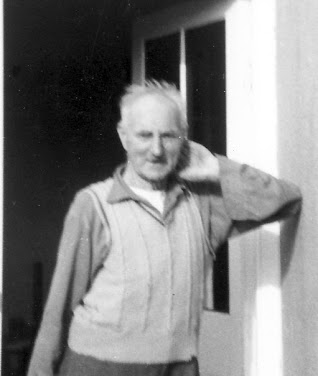 Frank was born in 1882 in a village in North Devon, in England. Dad was the fourth child of a family of ten children, six boys and four girls. Times were hard back then. His father was a merchant seaman, absent for many months at a time, only coming home between voyages for short periods, just enough time to reacquaint himself with family life and start another new baby on the way.

The children grew up living with aunts, uncles and grandparents, as the tiny cottage by the sea wasn't big enough to hold all the children.

When my Dad was a young man, he would walk early in the morning to the nearby town, spend all day unloading the sailing ships that brought coal across the Bristol Channel from South Wales, load the ships with local strawberries for sale in the Welsh markets, and then walk the five miles home at night, perhaps catching a ride on a horse and cart, no cars back then, just to do it all again the following day.

Later, he worked at a builders supply yard hauling lumber, concrete, bricks etc. All physical work. He was a strong man. During WW1 he went to Herefordshire and worked in a munitions factory.

Dad married his sweetheart Rowena in 1908. But things didn't go smoothly. They had a child, but the child didn't live. I don't know if it was a girl or a boy, my Dad never mentioned it.  After the loss of the child, Rowena became ultra-religious and spent most of her time at the local church. I think that was a hard time for my Dad. She died in the 1930s.

By this time, Dad had purchased a strip of land on a south facing slope overlooking the sea and had built a bungalow. He planted 3 acres of strawberries, which was to become his major source of income. And not only strawberries.... he grew all his own fruit and vegetables, including some extra that he sold, raised chickens and of course, there were always fresh eggs.

One day in May when he was working in the strawberry field (everything done by hand back then, no tractors or machinery), a woman called to him over the hedge asking the price of the strawberries. They chatted for a while, money and strawberries exchanged hands, and then my Dad invited this nice lady to come and have tea with him the following day.

Kath must have liked the way he made the tea, or perhaps it was the strawberry jam and scones that tempted her. Six weeks later they were married. That was back in 1941. I arrived as quite a surprise to everyone four years later.

I suppose my childhood was a little different from that of my friends, as my Dad was so much older than other dads, but he was a great dad to me. He played games with me, and he let me help him in the garden. His pet name for me as a child was Patsy.... I have no idea why. Dad lived a long and active life. The bungalow and the strawberry fields were sold in the early 1960s and we moved to the main street of the village, where Dad continued to raise all his own vegetables in the small back garden until his death in 1977, in his 96th year. He celebrated two Silver Wedding anniversaries.... one with each wife. Not many people can claim that! He gave me away at my wedding and got to meet one of his grandsons, happy events that he never thought he would live to see.

Happy Birthday to my Dad!

Both of these small 9"x12" canvas boards were the super cheap ones from Dollarama, made in China of course, and had already been painted on. But I don't want to experiment on good canvases until I know what I'm planning to do, so the paintings were covered up with a couple of coats of gesso, ready to start again. Not an ideal situation but it worked.

This first canvas board  had a couple of thin coats of burnt orange acrylic added, then sealed with matte medium, and then I sploshed it with a dark blue mixed with some retarder and scraped swirls and bends and organic shapes in the runny paint. Once it was dry, the background was filled with the lighter blue. My first attempt at this. Not overly impressive, but next time I'll have a better idea of what to do. Choose different colours for a start. And smoother swirls. 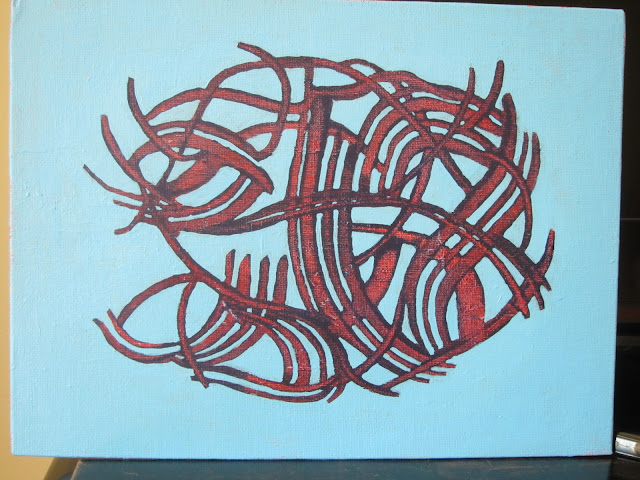 The second board had the same burnt orange and matte medium layers, and was covered with blue acrylic with a bit of retarder to keep the paint from drying too quickly. Some sprinkles of isopropyl rubbing alcohol reacts with the paint, creating lovely orange circles in the blue, and then I covered it all with crumpled plastic sandwich wrap to get some nice texture.
Drying overnight. Removing the plastic wrap reveals all sorts of interesting shapes. Then some circles painted in with leftover blue from the first project. Colours could be brighter in this photo, I think it needs some gloss to make the colours stand out more. 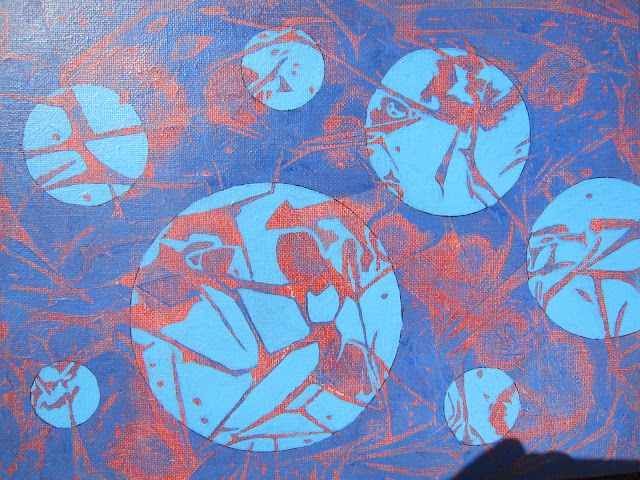 Fun to do. I might continue with this theme.

Even though I haven't posted for a couple of days, I've been trying to keep the creative juices flowing. I spent much of yesterday wandering in the past.... a bit of genealogy research for a friend. Why oh why did our ancestors all use the same names? Far too many Georges, James's, Johns and Mary Annes. No imagination! I feel so happy when I come across a Claudius or a Lavinia, although the actual Claudius or Lavinia probably hated their names and wished they were unassuming John and Mary Anne.

I decided to play with some of the mistake paintings that weren't going anywhere.... already messed up so why not mess them up some more. It can be huge fun sploshing paint around. 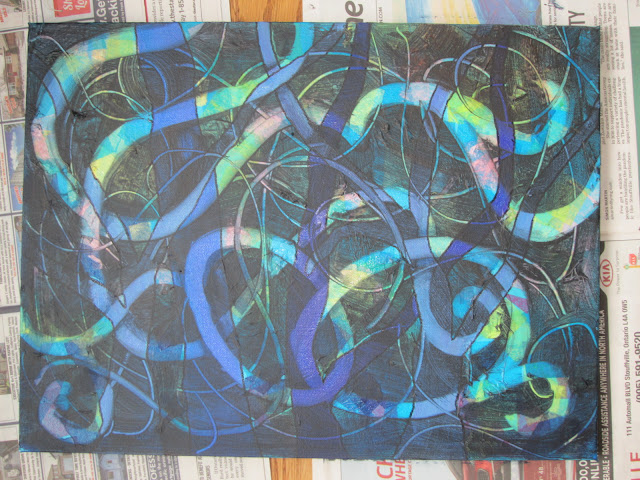 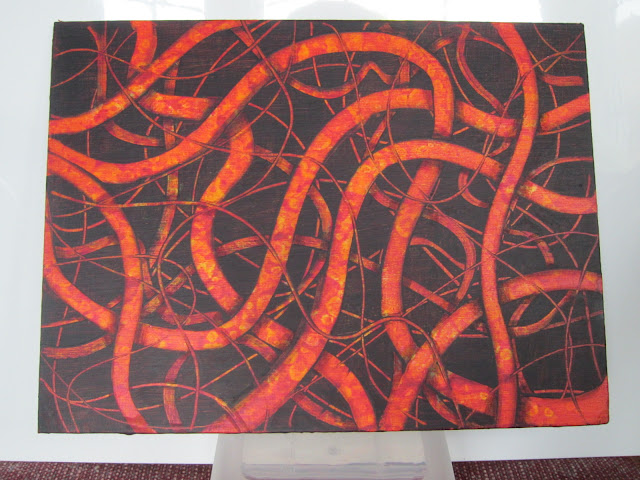 That was fun! The colours are actually a lot brighter than these photos show. Perhaps I'll expand on this theme, there are more mistakes in storage that can be played with. Crazy stuff!
Posted by Shammickite at 09:28 23 comments:

Well, I've made it to Day 2 of my personal March Art challenge....that's an achievement in itself. I watched a few "how to" You Tube art videos this morning, and then I was inspired to get the gelli plate out. These prints were made with maple leaves that I picked up last fall and pressed them in an old sketch book. Perhaps some of them can be used as covers for bookbinding. 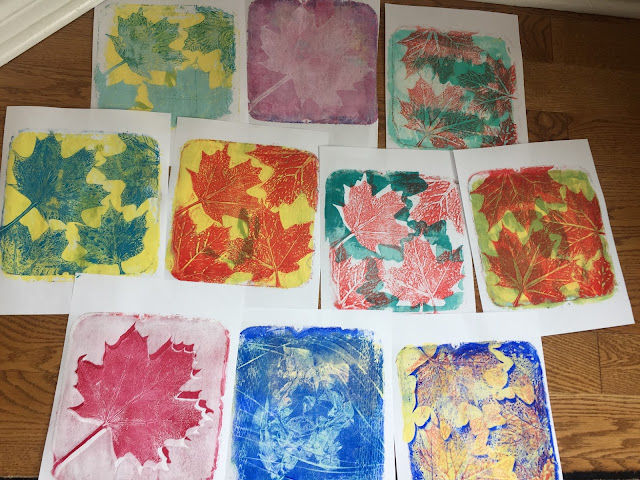 I have been so uninspired and lazy during this current pandemic lockdown.... not going out anywhere except to the grocery store or the pharmacy, and not seeing friends and family. The Zoom meetings and the phone calls help, but it's just not the same. The Covid restrictions in my area were relaxed a little this week, so I have to smarten up and get on with life, no more excuses.

So I'm going to see how far I get with posting some art every day. No promises but I'll try. This is today's offering.... painted with cheap acrylic paint using plastic bags and cardboard stencils. Yep.... it's a weird mess, but at least it's MY weird mess. 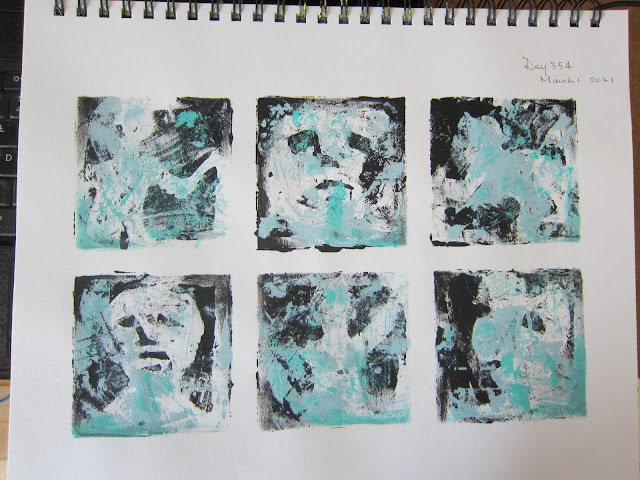