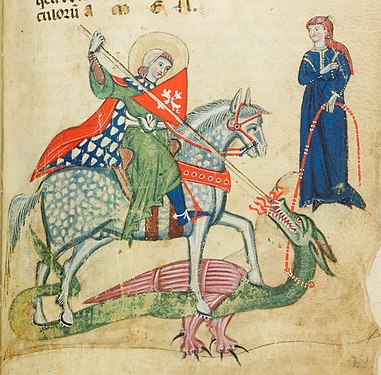 Saint George is the brave soldier in the Roman army who slayed (slew?) the Dragon, and here he is in a Miniature from a Passio Sancti Georgii manuscript (Verona, second half of 13th century).

Did he really slay a Dragon? Maybe. It's a good story related to the conflict between light and darkness, good and evil.

The fearsome Dragon demanded human sacrifices and brave Saint George came along just in time to save the princess who had been chosen as the next offering. The King offered George treasures as a reward for saving his daughter, but George gave the wealth to the poor, who were so grateful that they all became Christians. But George was tortured and lost his head during the persecution of Christians in 303AD, thus becoming a Saint.

The warrior Saint George has been the subject of legend since the 7th Century, and became a Patron Saint of the Order of the Garter in 1348. He was promoted to the Patron Saint of England in the middle 1500s. The Cross of St. George (red cross on a white background) is the basis of the Union Jack flag.
Posted by Shammickite at 10:40 18 comments:

In these strange times, there is an army of essential workers keeping Canada (and the whole world) operating as usual. Those brave people are in the front lines of the battle against this nasty little bug and they are the people who are allowing me to do what is requested of me, that is, to stay home and stay safe and not worry.
Thank you to Hospital Workers, Doctors, Nurses, Pharmacists, Volunteers, Personal Service Workers, Teachers, Police, Fire men and women, Garbage workers, Grocery workers, Drug store workers, Government workers, Bank tellers, Bus Drivers, Truck drivers, Cleaners, Food Delivery, Restaurant owners, Cooks, Mail Carriers, TV and Radio news, Politicians, I am running out of names.... but they are all working together to beat this Pandemic and get our country back to a version of "Normal". THANK YOU! 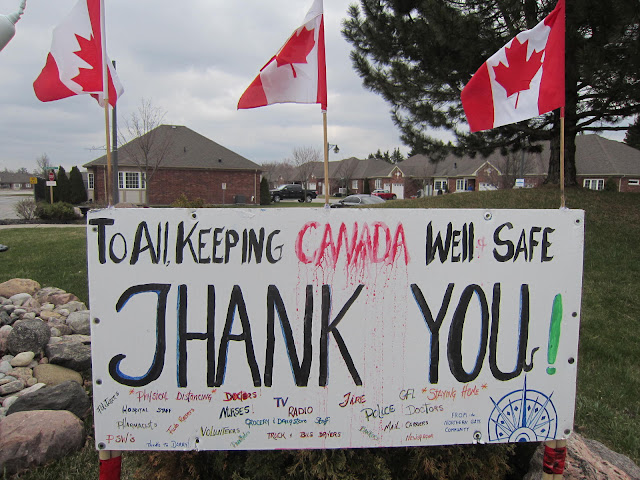 Art Behind the Story

The current Covid-19 situation has caused so many people to abandon the daily commute to the office and work from home. This includes the so-called "experts" and journalists and interviewees who have been appearing on our TV screens to keep us up to date with what's going on around the world.
Often, whatever is hanging on the wall behind them is more interesting to me than what is being said. I'm getting an unauthorised peek into people's private homes and offices.
I don't know who all these people are, but they own some interesting art! I wish I could see the whole piece. 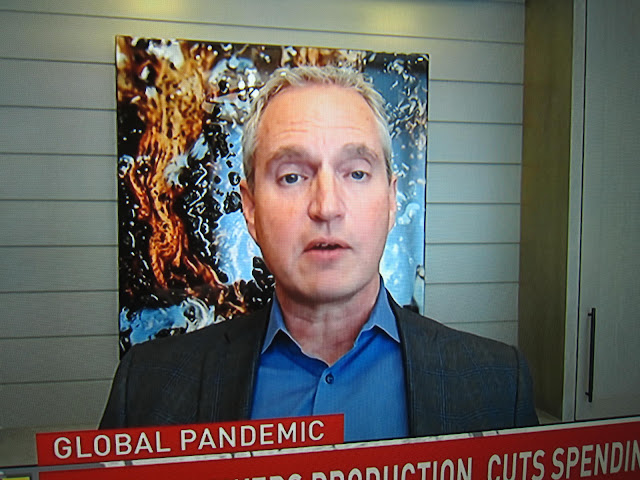 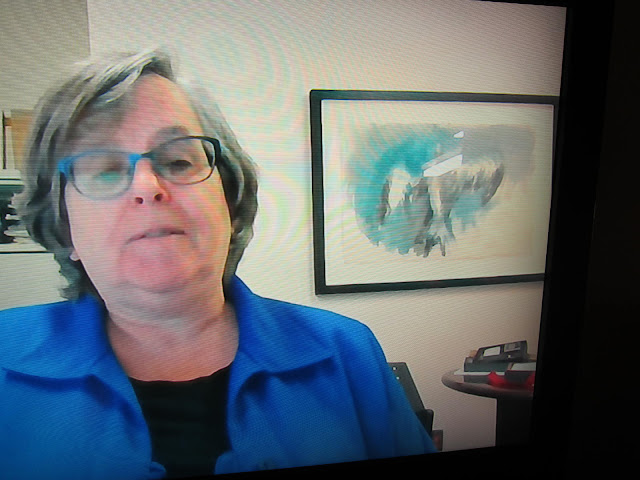 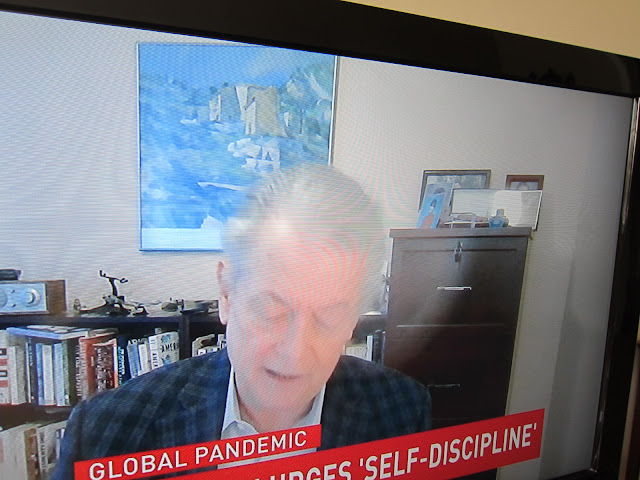 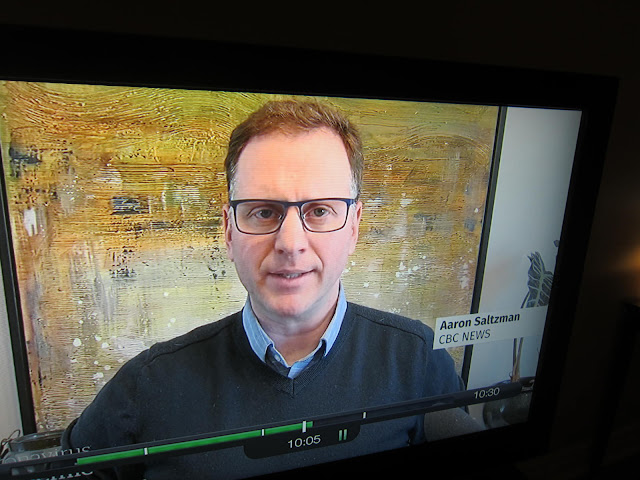 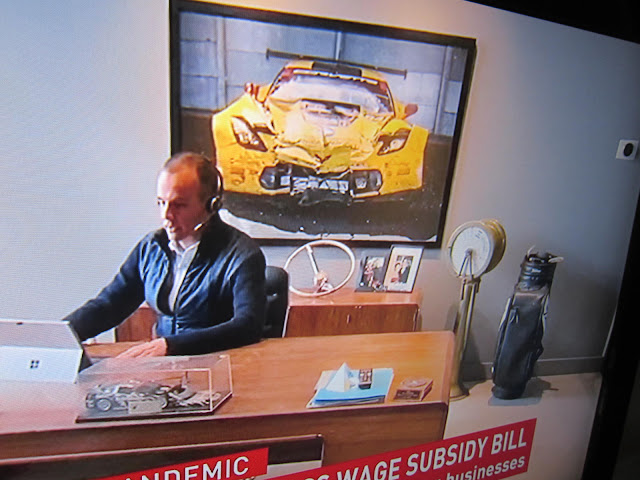 I don't remember who the last chappie is, but he certainly loves cars! And he plays golf.

Day 28 of me being isolated from the rest of the world. Ho hum.
Not much excitement in my life.... but this morning I woke up to SNOW! It's 9 April, should be spring, shouldn't it.... snow is not allowed! As soon as the sun came out, it all started to melt. 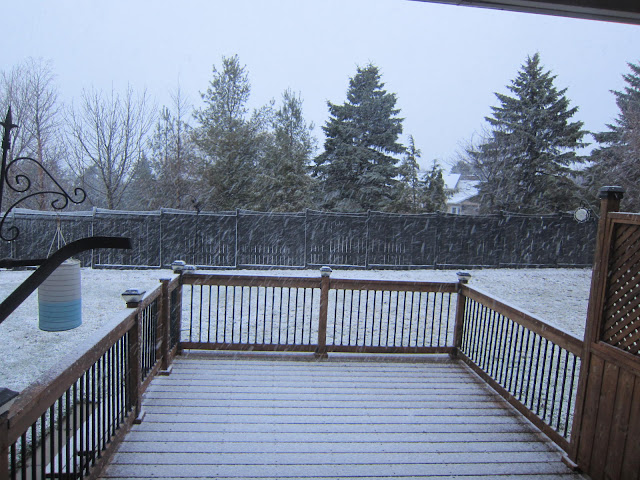 A couple of days ago I saw these little wild beauties flowering among the half-dead grass. Coltsfoot is one of the first flowers of the spring. Coltsfoot (Tussilago farfara) is in the daisy family and has been cultivated for its medicinal properties. Used as an herbal tea, it's said to treat respiratory infections, sore throats, gout, flu, and fever.  I wonder if it has any effect on Covid-19? 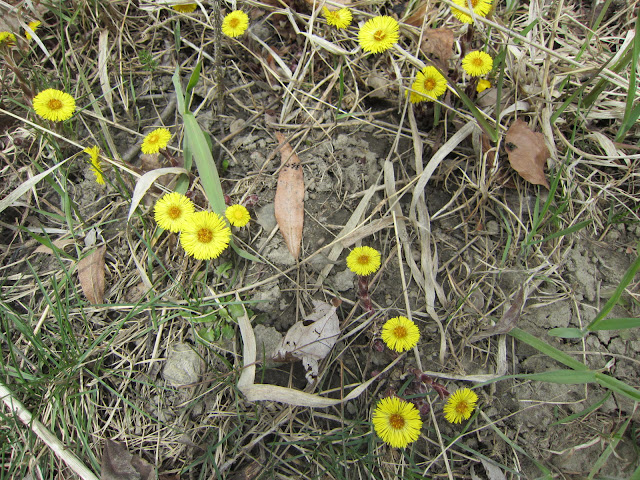 Another snippet of information that is important today is that today, April 9, is Vimy Ridge Day.

The Prime Minister of Canada, Justin Trudeau, today issued the following statement on Vimy Ridge Day:
“Today, we remember the thousands of Canadians who fought and gave their lives in the Battle of Vimy Ridge.
“The capture of Vimy Ridge was more than just a military victory – it was a turning point for our country. During the battle, soldiers from all four divisions of the Canadian Corps fought together for the first time. They came from coast to coast to coast – Francophones, Anglophones, new Canadians, and Indigenous peoples.
“On Easter Monday in 1917 – after carefully planning and preparing their attack – these Canadian soldiers battled uphill through sleet, mud, and machine gun fire to achieve one of the First World War’s most decisive victories. The innovative fighting techniques used by our soldiers at Vimy Ridge would also contribute to the final Allied victory a year and a half later.
“The Battle of Vimy Ridge was a defining moment for Canada, but it came at a great cost. Nearly 3,600 Canadians lost their lives, and over 7,000 more were wounded. It remains one of the bloodiest battles in our country’s military history.
“On this day, we honour the courage and sacrifice of those who fought at Vimy Ridge. Canadians remember who they were, what they stood for, and the history they defined. We also pay tribute to all our brave Canadians in uniform, past and present, for their unwavering dedication and service. Every day, they protect the fundamental values that define this country.
“Lest we forget.”
Posted by Shammickite at 11:15 19 comments:

I saw this on a facebook page (yes, with so much spare time on my hands I have been tempted by the dreaded facebook), and I thought it was worth repeating here.
My apologies to whoever wrote it.... I don't know your name so I can't give you credit, but it certainly describes how I am feeling right now.

We fell asleep in one world, and woke up in another.Suddenly Disney is out of magic,Paris is no longer romantic,
New York doesn't stand up anymore,
the Chinese wall is no longer a fortress, and Mecca is empty.
Hugs & kisses suddenly become weapons, and not visiting parents & friends becomes an act of love.
Suddenly you realise that power, beauty & money are worthless, and can't get you the oxygen you're fighting for.
The world continues its life and it is beautiful. It only puts humans in cages. I think it's sending us a message:
"You are not necessary. The air, earth, water and sky without you are fine. When you come back, remember that you are my guests. Not my masters."

Now if only we can remember this when the world starts to return to what we used to think was normal.
Posted by Shammickite at 07:53 11 comments:

WARNING: My blog posts are going to get more and more boring as time passes. For me it's Day 21 of staying at home and social distancing. Life doesn't offer a lot of excitement right now.

We're not in total lock down so far, but all travellers returning to Canada are required by law to quarantine for 14 days. My age group.... the oldies, over 70s.... are suggested to stay home too, with only a once a week trip to get groceries. I have ordered groceries for pickup, but it's very hard to get a time slot, so many other people have the same idea. I have a pickup at Longo's on April 8 and from Walmart on April 9. That should tide me over for April, but I think I'll still be here self-isolating in May.
I go for my daily walk around the pond every morning. No wildlife to be seen today, but five Canada geese and a pair of Mallard ducks were visiting yesterday. 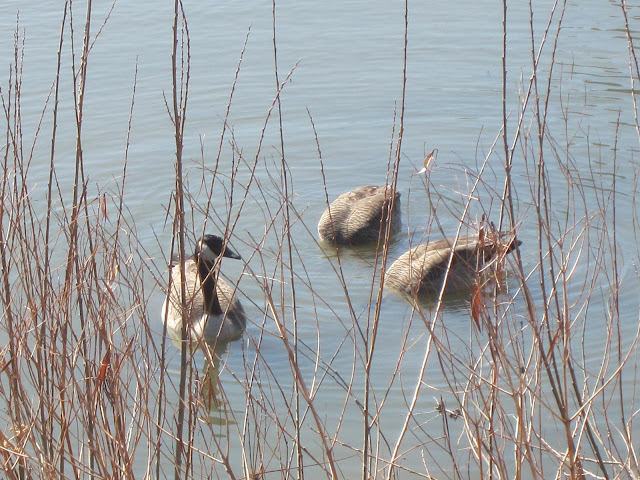 The last loaf of store bread has been eaten, so it was time to do some baking. I have enough bread flour for 2 or 3 more loaves, but I have been told that flour is hard to get in the grocery stores. I hope there is some in my grocery order. Everyone doing their own baking I suppose. 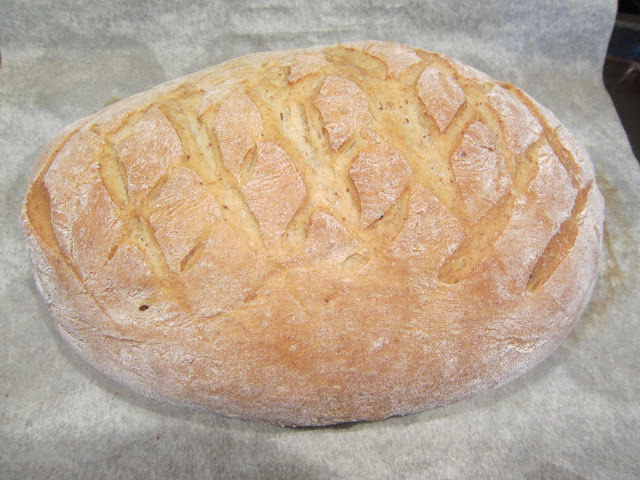 I try to do some sketching or painting or other forms of art every day. Today, Thursday, is my usual Art Group day, cancelled for the last couple of weeks, and not likely to start up again for a long time. I miss it a lot. There are 20 of us in the group, and we share motivation and creativity. It's very inspiring to share an activity with like-minded people. I'm finding it difficult to get on with it on my own. 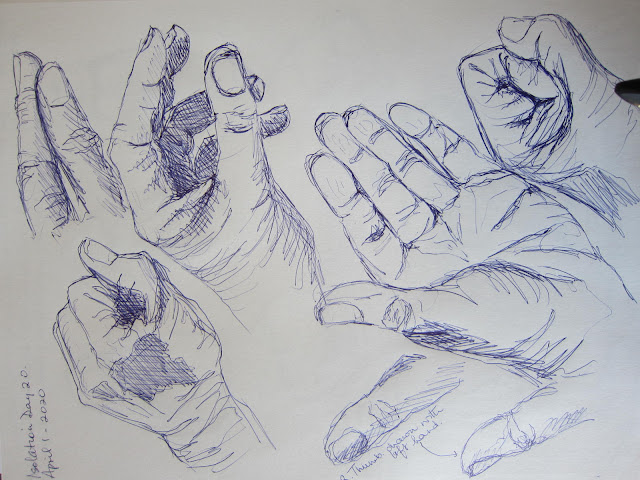