I and a group of other ex-pat Brits waved the flag this week at the Toronto Symphony Orchestra's version of the Last Night of the Proms, a musical party of all things British.

The Promenade Concerts started in England in 1895, and have continued since then, with classical and pops music presented in concert halls all over Britain.
But the culminating concert, the Last Night of the Proms, takes place at the Royal Albert Hall in London, and always features the pieces of music that bring tears to the eyes of Brits living abroad, such as Elgar's Pomp and Circumstance (features Land of Hope and Glory), Fantasia on British Sea Songs (includes Rule Brittania!), and the hymn, Jerusalem.

Are you sniffling yet, ex-pats? Just a little bit?

We couldn't make it all the way to London, so we decided to attend the Canadian version. When we arrived at Roy Thomson Hall, the 48th Highlanders of Canada Pipes and Drums were in full voice with Scotland the Brave. 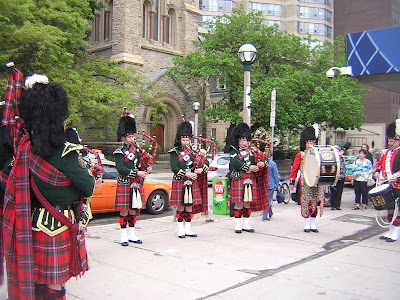 Once inside the concert hall, the crowd began to fill the 2630 seats, with many of the concert-goers clutching a flag.... mostly Union Jacks, but some Scottish, Welsh and English flags too. After all, this is a flag-waving extravaganza, if you don't have a flag to wave at this event, you're in the minority!
If you didn't have a flag, not to worry, they were selling them in the lobby, so there was no excuse! 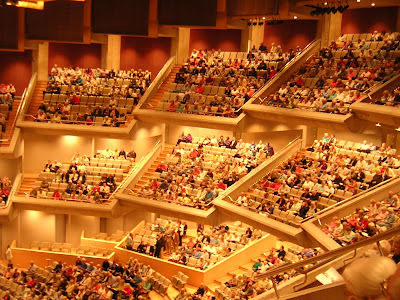 And the guests of honour were Will and Kate (well, Will and Kate wannabe's actually). And of course, the orchestra played the appropriate wedding music.... Mendelssohn's Wedding March, and Sammy Kahn's Love and Marriage. 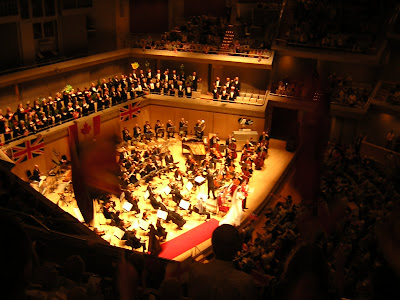 Arranged on the next level above the orchestra were the members of the Toronto Mendelssohn Choir.
(Sorry about the blurry photos, you'll have to click to enlarge Will and Kate.)
Maestro Bramwell Tovey was scheduled to conduct the concert, but unfortunately he had to cancel due to the sudden death of his mother, so Maestro Grant Llewellyn took over at short notice, and he was marvellous. Funny, personable and entertaining. A great afternoon at the Symphony!

olunteer job often has me taking tickets and showing people to their seats at my local Theatre and Arts and Culture Centre, where some great concerts take place. Last night was no exception. The opening artist was Ian Kelly, a singer-songwriter from Montreal.... he was awesome.
And the main act of the evening was Meaghan Smith, Canadian singer-songwriter and Juno Award winner... wow, could she sing! And she's gorgeous too. Accompanied by her guitarist husband (who she calls her husBAND, cos he makes up the whole band!) she sang her way through her latest CD... great stuff. I sold CDs and merchandise for her at intermission, and she gave me a copy of her CD.... I can't wait to listen to it!
Posted by Shammickite at 09:25 11 comments:

My Dad has been gone a long time now... 34 years to be precise. But I wish him a Happy Father's Day anyway! He was a lovely Dad to me.

Frank was born in 1882 in Combe Martin in North Devon, in England. He was the fourth child of a family of ten children. Times were hard back then. His dad was a merchant seaman, away from home for many months at a time, only coming back to North Devon between voyages for short periods, just enough time to reacquaint himself with family life and start another new baby on the way.

The children grew up living with aunts, uncles and grandparents, as the rented tiny cottage by the sea wasn't big enough to hold all the children.

When my Dad was a young man, he would walk early in the morning to the nearby town of Ilfracombe, spend all day unloading the sailing ships that brought coal across the Bristol Channel from South Wales, load the ships with local strawberries for sale in the Welsh markets, and then walk the five miles home at night, perhaps catching a ride on a horse and cart, no cars back then, just to do it all again the following day.

Later, he worked at the Devon Trading Company yard... a builders supply yard hauling lumber, concrete, bricks etc. All physical work. He was a strong man.

During WW1 he went to Herefordshire and worked in a munitions factory. And during WW2 he was part of the Home Guard (Dad's Army) looking out for the Hun who might have intentions of invading from the Bristol Channel.

Dad married his sweetheart Rowena in 1908. But things didn't go smoothly. They had a child, but the child didn't live. I don't know if it was a girl or a boy, or how or why or even when the child died, my Dad never mentioned it. 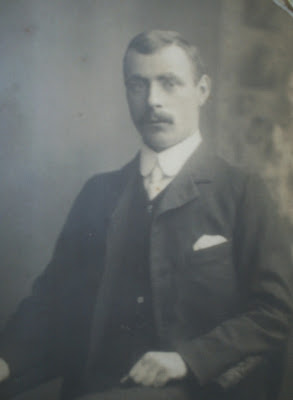 After the loss of the child, Dad's wife became ultra-religious and spent most of her time at the local church. I think that was a hard time for my Dad. She died in the 1930s. By this time, Dad had purchased a strip of land on a south facing slope overlooking Combe Martin Bay and had built a brick bungalow. He tilled the land and planted 3 acres of strawberries, which was to become his major source of income.

And not only strawberries.... he grew all his own fruit and vegetables, including some extra that he sold, raised chickens and of course, there were always fresh eggs. 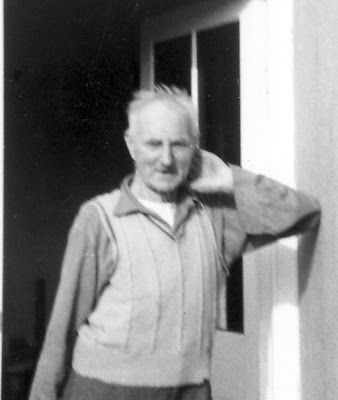 One day in May when he was working in the strawberry field (everything done by hand back then, no tractors or machinery), a woman called to him over the hedge asking the price of the strawberries. They chatted for a while, money and strawberries exchanged hands, and then my Dad invited this lady to come and have tea with him the following day.

Kath must have liked the way he made the tea, or perhaps it was the strawberry jam and scones that tempted her. Six weeks later they were married. That was back in 1941.

I arrived as quite a surprise to everyone in 1945.

I suppose my childhood was a little different from that of my friends, as my Dad was so much older than other dads, but he was a great dad to me. He played games with me, and he let me help him in the garden. His pet name for me as a child was Patsy.... I have no idea where that came from. 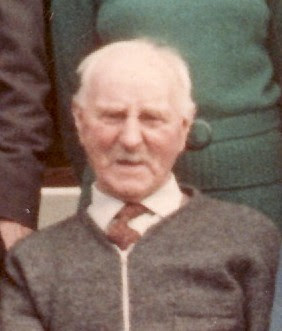 Dad lived a long and active life. The bungalow and the strawberry fields were sold in the early 1960s and we moved to the main street of the village, where Dad continued to raise all his own vegetables in the small back garden until his death in 1977, in his 96th year.

He celebrated two Silver Wedding anniversaries.... one with each wife. Not many people can claim that! He gave me away at my wedding and got to meet one of his grandsons, happy events that he never thought he would live to see.
Happy Father's Day, Dad!
Posted by Shammickite at 09:04 20 comments:

Up On The Roof

The current exhibition at our local Gallery is by artist Max Streicher.
Many of his installations feature inflatable figures sewn from lightweight fabrics that allow movement. The arms and legs of these big people move with the wind, and their heads bob constantly. 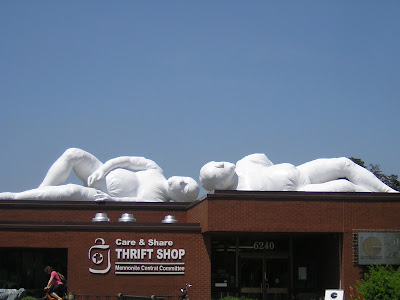 His bio says "Using industrial fans and simple valve mechanisms to animate sewn forms with life-like gestures, the large-scale works hint at enchantment, fantasy and optimism while they are intended to overwhelm." 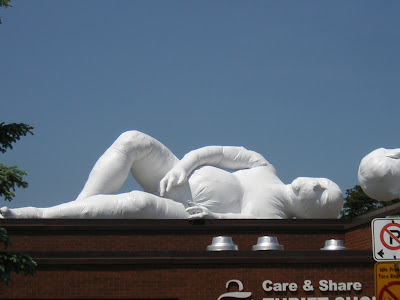 They are definitely overwhelming. It's a little disconcerting to look up and suddenly notice these giants tethered to the roof.
Posted by Shammickite at 09:07 9 comments:

Remember making the acquaintance of this little chap from February 2009? 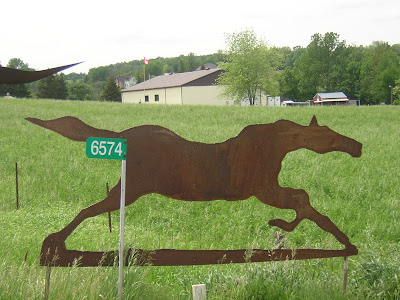 He now has a prancing steed to keep him company at the end of his driveway.
Posted by Shammickite at 15:47 8 comments:

Hey, did you know I had a birthday?
Yup... now I'm TWO!
Auntie J got me a cake.... with Lightnin' McQueen and Tow Mater on the top. Isn't it great? Let me grab it... YIKES! What's that gooey red stuff all over my hands? (See naughty little finger marks bottom right.)
Help! Wash hands, Daddy! I all yucky! 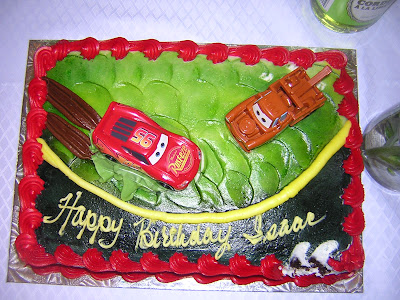 OK, all cleaned up. Hmmmm... now I'm not sure of the next move. And there's my cousin waiting for his cake. 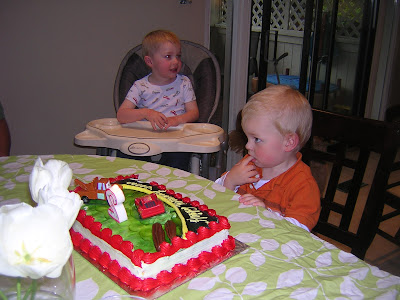 OK, Mummy lit the candle so that means it's my cue to blo-o-o-o-ow! 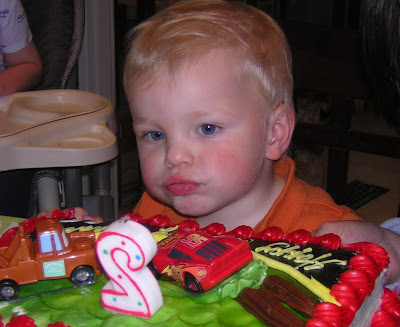 Now everyone is happily munching on my cake... and I get to play with the toys. 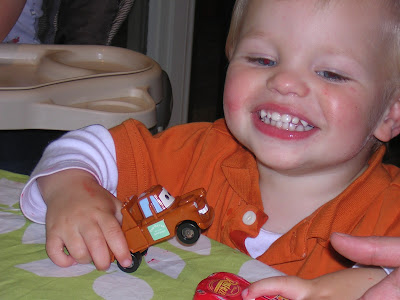 WooHoo! Being TWO is a blast so far. I must make sure I'm TWO more often!
Posted by Shammickite at 18:41 15 comments:

OlderSon and The Equestrienne live with Callum, and share their home with prancing steed Maeve, moggies Everest and Fuji, and the enormous hairy rescue dog Badger.
R.I.P. Leon and Jojo, two furry feline friends.
YoungerSon and The Bride live with Isaac, Max and Emma, barn cat Smudge, Lucy the goose, a flock of laying hens, and Tessa the Golden Doodle.