Some pics of this morning's performers at the 16 day Longest Concert Ever by Multiple Artists record breaking event for a Guinness World Record. Only a couple of days to go now. See the countdown clock in the top right corner? Days... hours... minutes... seconds.


OOOOPS! Almost forgot..... HAPPY BIRTHDAY today to YoungerSon! Poor lad has to wait a whole month for his birthday to arrive.

Update Monday April 3: the concert's continuing until midnight Tuesday April 4. The 16 day record was reached on Sunday morning at just after 7:00am and has to be confirmed by Guinness... meanwhile the extra couple of days are a sort of insurance policy, I think! Read about it HERE.

I'm back from my vacation, but before I show any pictures, let me tell you about an important event going on in my small town. 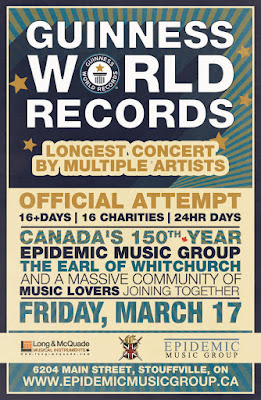 There's an attempt going on upstairs at the local pub to break the record for the Longest Concert by Multiple Artists. The live music concert started on Friday 17th March and is currently still going strong, 24 hours a day, 7 days a week, aiming for 16 days finishing on 1 April, or perhaps longer, if the stamina (and the coffee) holds out.
Audience members are charged $5.00 and the money goes to a different charity each day. Today it goes to the Canadian Mental Health Association.

The current record is held by an Irish Pub in Las Vegas since October 2014. The Las Vegas concert lasted 372 hours and 10 minutes, beating the previous record of 360 hours. We can beat that!

There's a lot of rules and regulations to comply with the Guinness records people. No more than 5 minutes between acts, and only 30 seconds between songs, and no song shorter than 2 minutes. No time to chat to the audience between songs or tune the guitar! And if the guitar string breaks or some other disaster occurs, no stopping.... keep going.
The same song can't be performed more than once every 4 hours, and there has to be minimum 10 audience members at all times, even at 3:00am, and they all have to be awake!
Official timekeepers have to record the start and finish times of each song.

This crazy event is featuring over 400 bands and solo performers over the 16 days, and has over 100 volunteers making sure everything runs smoothly. The music ranges from classical to opera to heavy metal and everything in between. I was there to watch my friends perform this afternoon, and then stayed for the next couple of gigs. Great music. Great fun.


Update March 29: I'll be back at the concert today as my friend's daughter is singing at 1:00pm. Live streaming video of the concert at https://epidemicmusicgroup.ca/#

Update March 30: To date more than $50,000 has been raised for charities from this concert. The concert will go on until Tuesday April 4 to try and beat a record set last week by a concert in Detroit, Michigan, USA. Update 6pm: $60,000 raised now!
Posted by Shammickite at 16:13 16 comments:

Away for a couple of weeks.
I tried to schedule some fascinating blog posts to amuse my readers while I'm not here, but nothing has gone to plan! So I'll be back in April with news of my travels. Stay tuned.... 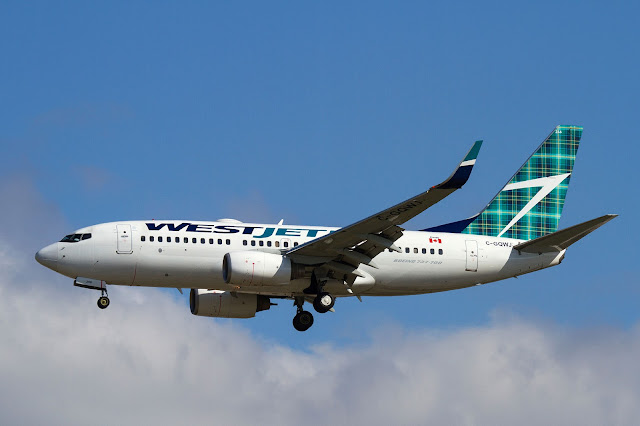 Jellyfish are soft-bodied, free swimming aquatic animals with a gelatinous umbrella shaped bell, and long tentacles. Jellies have floated along the ocean currents for 500 million years, making them the world's oldest multi-organ animal.
The creature is an invertebrate made mostly of water, and has no heart, brain or bones. 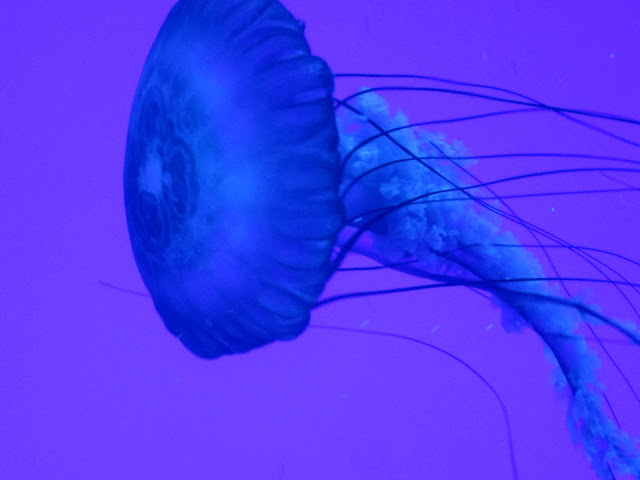 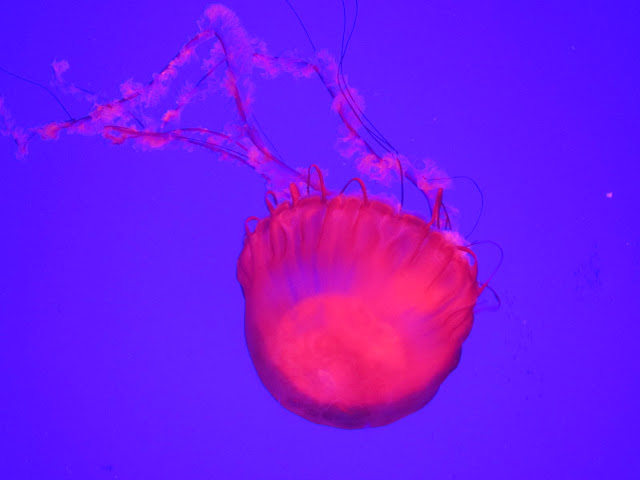 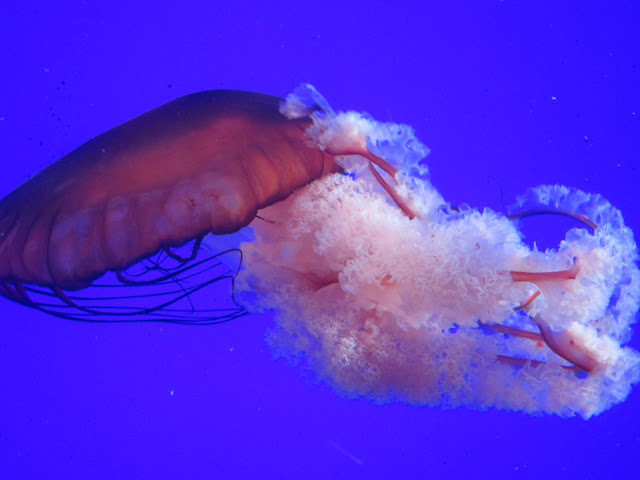 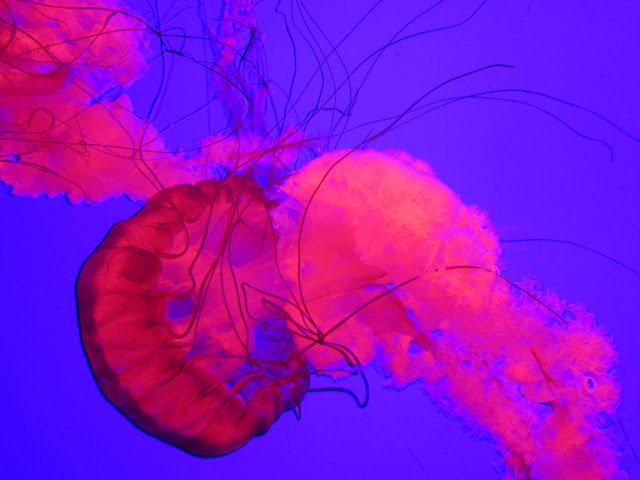 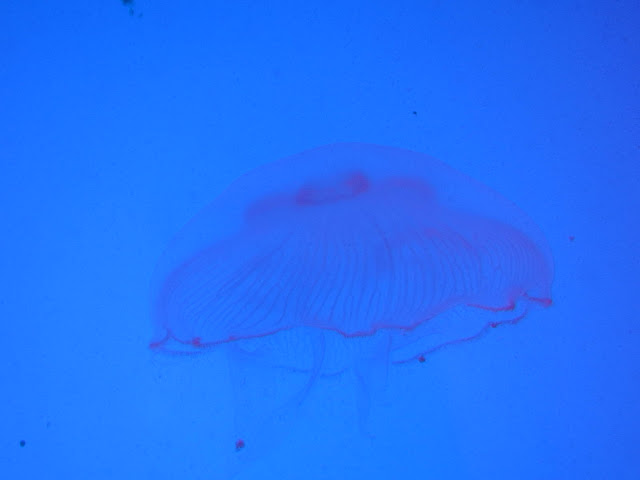 Time for some of the more static creatures of the oceans.
Sea anenomes are close relatives of jellyfish and coral, and may look like plants, but are actually aquatic animals. More than 1000 different varieties found throughout the world oceans. When I was growing up near the beach in England, the rock pools were full of red and green anenomes, looking like round lumps of jelly stuck to the rocks when the tide was out, but waving their tentacles menacingly when under water.

They may look like pretty flowers, but beware.... they are predatory! They are able to release venom through their many tentacles surrounding a central mouth, and stun their prey, making it easy to enjoy dinner. Sea anenomes can live up to 50 years, and most varieties are anchored to one place and unable to chase their prey. They'll ensnare and eat fish, zooplankton, larvae, worms, in fact whatever comes along. 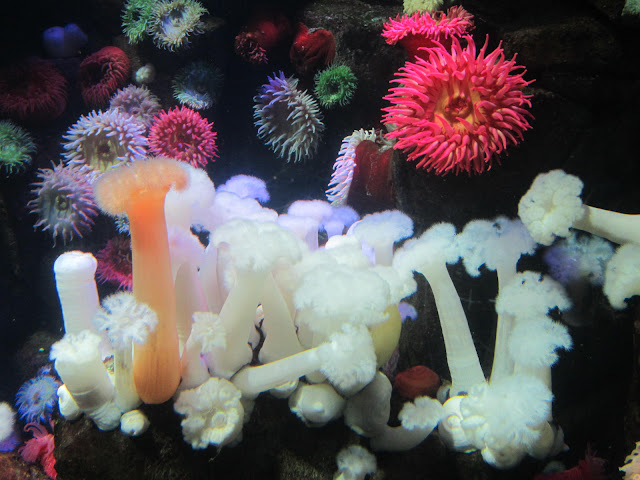 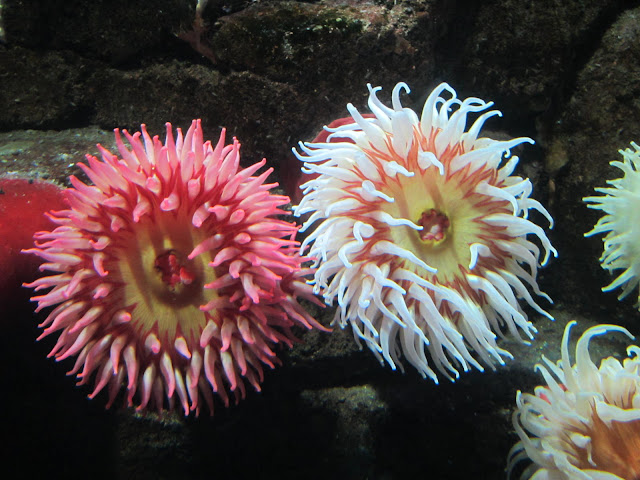 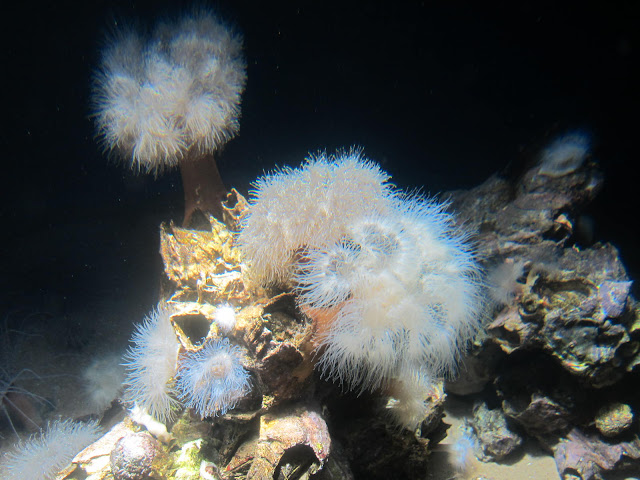 Afterthought.... and nothing to do with sea anenomes.... Happy Birthday to my Dad, he was born 135 years ago today!
Posted by Shammickite at 07:21 15 comments:

A trip to Ripley's Aquarium of Canada is always fun. I was there with the family a couple of years ago, here, and this time I met with some English friends who were on vacation and joined them in being a tourist for the day.
The Aquarium opened in October 2013. It's right downtown in Toronto, located at the foot of the CN Tower. Lots of big numbers here: 16,000 marine animals; 135,000 square feet; 1.5 million gallons (5.7 million litres) of water; 17 habitats; more than 100 different species of fish; the world's most extensive jellyfish exhibit. 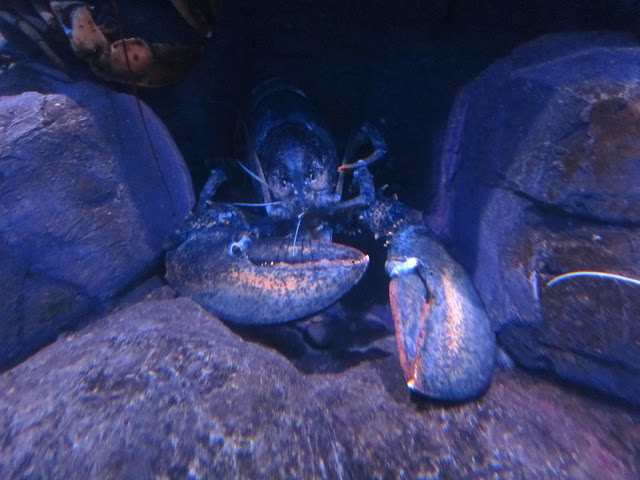 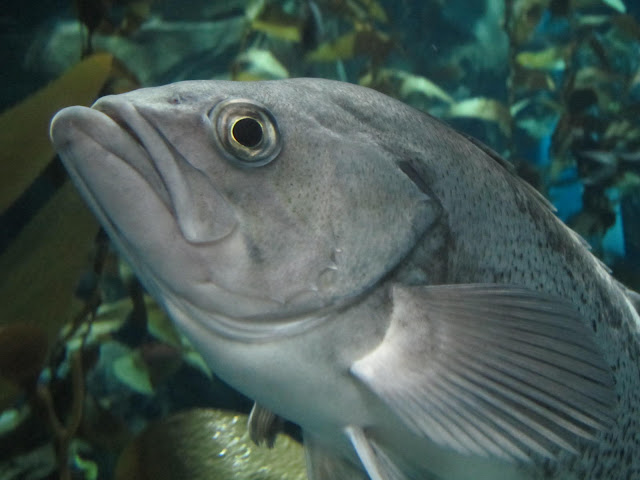 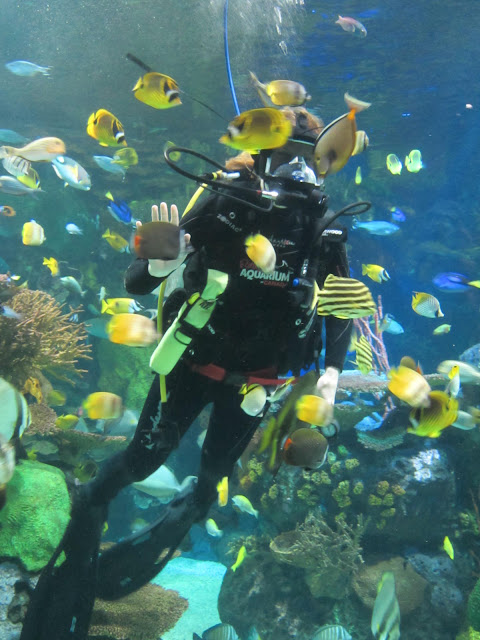 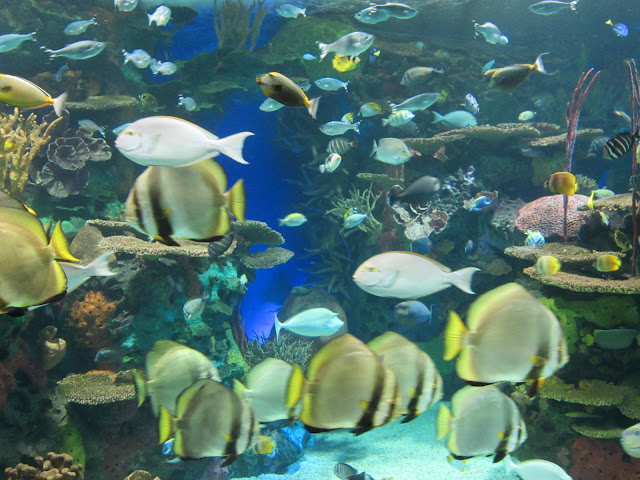 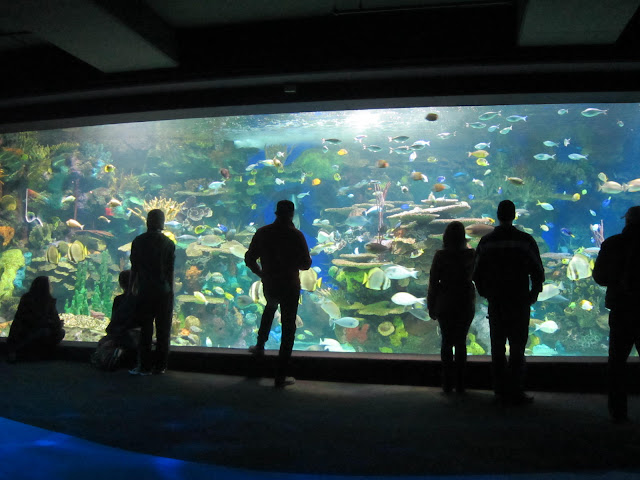 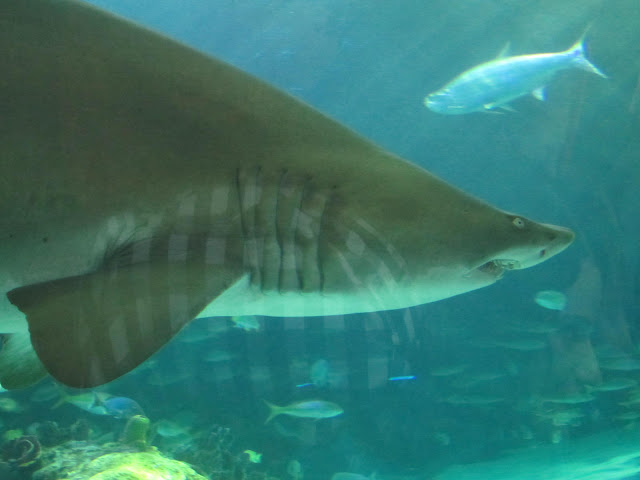 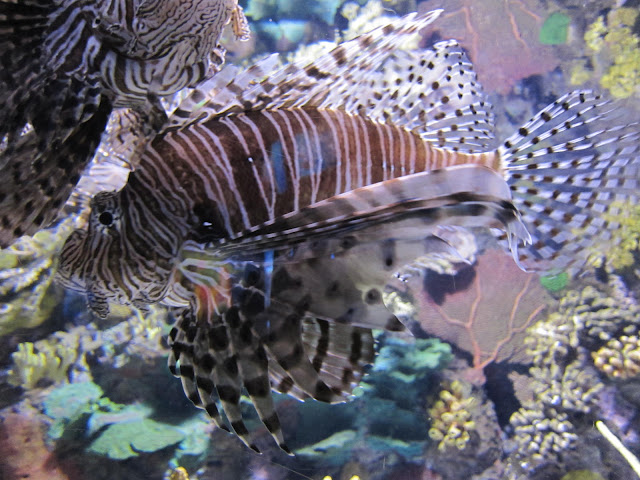 It was the perfect day to see the fish. No huge crowds to battle as the children are still in school. It will be a different story next week during March Break.
Posted by Shammickite at 16:15 14 comments: