Chagall at the AGO

Last week I embarked on a little adventure with a couple of girlfriends. We took the GO bus to Toronto and went to the Art Gallery of Ontario. Footloose and fancy free in the big city.... Woohoo! 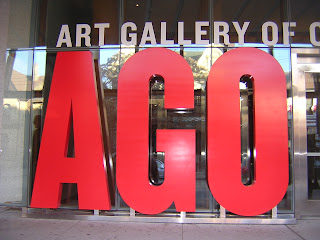 The aim was to see the current exhibition of paintings by Marc Chagall and the Russian Avant-Garde, on loan from Le Centre Pompidou, Paris. 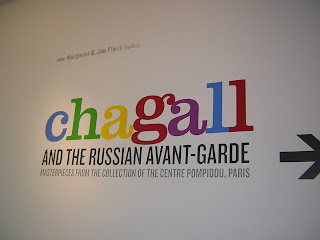 I had seen the twelve magnificent stained glass windows that Chagall had designed for the Hadassah Medical Centre in Jerusalem when I was there a few years ago, so I was interested to see his paintings too.


Chagall's "Blue Circus".“For me, a circus is a magic show that appears and disappears like a world. A circus is disturbing. It is profound.”
“I can still see in Vitebsk, my hometown, in a poor street with only three or four spectators, a man performing with a little boy and a little girl. Clowns, bareback riders and acrobats have made themselves at home in my visions. Why? Why am I so touched by their makeup and their grimaces? With them I can move toward new horizons. Lured by their colours and makeup, I dream of painting new psychic distortions. Alas, in my lifetime I have seen a grotesque circus: a man [Hitler] roared to terrify the world.”
“I wish I could hide all these troubling thoughts and feelings in the opulent tail of a circus horse and run after it, like a clown, begging for mercy, begging to chase the sadness from the world.”

The exhibition followed how Chagall’s Russian heritage influenced his art, and even though he spent much of his life in France, and even lived in the USA during WW2, his painting style reflected his Russian roots. There were 32 works by Chagall and eight works by Kandinsky. After seeing the Chagall exhibit, we wandered around a maze of more galleries, eventually finding ourselves in the Galleria Italia, designed by Toronto-born architect Frenk Gehry. 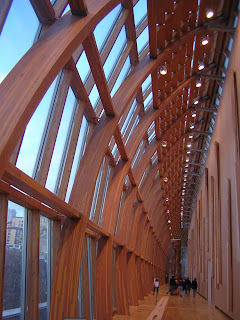 The Galleria Italia was part of Gehry's 2008 revitalisation of the AGO and is a glass and wood facade that spans 180m (590') along Dundas Street It was named in recognition of a $13million contribution by 26 Italian-Canadian families of Toronto. Stunning!

There's so much more to see at the AGO. I can see another visit in my future.
Posted by Shammickite at 14:47 9 comments: