In Ontario, millions of ash trees are being killed every year by an non-native invasive species, the Emerald Ash Borer. The nasty little insect feeds under the bark of ash trees, and when the eggs hatch, the larvae get inside the bark and disrupt the circulation of water and nutrients of the tree. The presence of just a few insects in the tree can kill it.

There is a chemical treatment available that will kill the insect, but often the borer has done the damage to the tree before it becomes apparent.

It was too late for the young ash tree in front of my house. This summer it produced hardly any leaves, and tell-tale holes appeared in the bark, indicating the Emerald Ash Borer was at work. So it had to go. 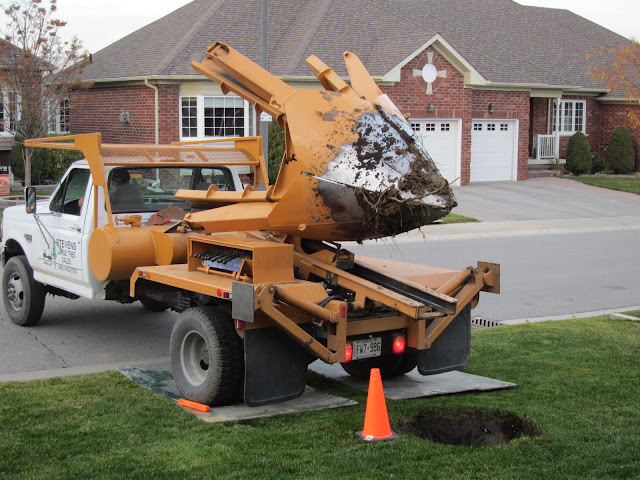 After cutting, the whole tree, trunk, branches, sticks, has to be disposed of safely, making sure the nasty bug isn't spread to any other healthy trees. The stump was taken away, and a surprisingly small hole was left in the grass. 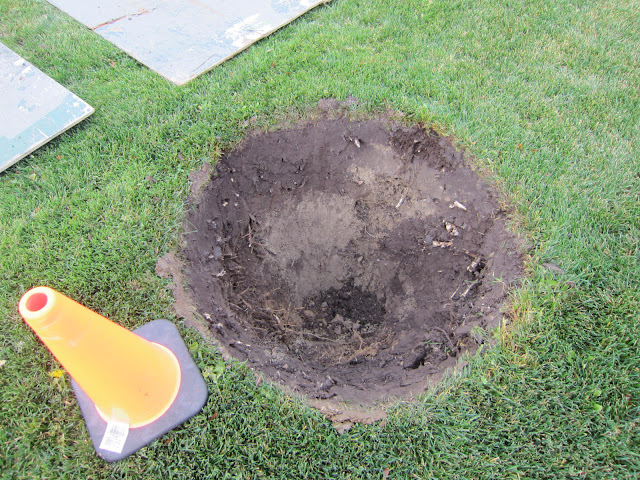 Within half an hour, the digger was back with a young tree, It's an Armstrong Maple. It will be tall, and not very wide, and the leaves turn red in the fall, just what I wanted.  It took just two minutes to plant, and you can see it here. OlderSon and Callum arrived in time to witness the happy event.

All new family members should have a name, so Callum has christened my tree Mr. Armstrong.

Posted by Shammickite at 15:58