With the tenth anniversary of the 9/11 tragedy in New York City coming up in a few days, I wonder where you were and what you were doing on that morning.

I searched the int 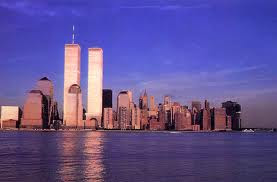 ernet looking for a suitable photo to illustrate that awful day, but the pictures of the planes and the fires and the rubble are still too upsetting, so I found a picture of the World Trade Centre towers before life changed for the world, and the USA in particular.

I was driving to work listening to CBC Radio when the news announcer broke in with a bulletin saying that a plane had hit the World Trade Centre. My minds eye saw a small 2 or 4 seater plane getting lost above Manhattan, and taking a wrong turn, but when I got to work, I found I could not have been more wrong.

I tried to access the internet but nothing was working and I couldn't find out any more news, and then someone in the office said a second airliner had hit the other tower. I couldn't believe it. And then I realised.... it was deliberate! And then news of a third plane, and a fourth. Nobody got much work done that morning. A TV was set up in one of the conference rooms, and people spent most of the day in shock, listening to the news reports and viewing horrifying footage of the story that was unfolding in New York City and Washington.

That evening, most television programs were cancelled in favour of coverage of the news from NYC and DC. I watched for a while, then turned it off. I just couldn't watch any more, too horrible. But within a few minutes, I was compelled to turn it on again.... too horrible to ignore, I suppose. I couldn't comprehend how such a monstrous thing could happen, but it did.... and it could again. Let's hope and pray that it doesn't.