Spying on the Neighbours

I've read all the books.
I'm fed up with knitting.
I can't drive anywhere, or even walk very far right now, so I have been reduced to spying on the neighbours for my entertainment.

Just a few houses away, this old wooden house has been used as a Nursery School for the past 20 years, but since the sudden death of the owner last summer, it's been "FOR SALE". It's just had new windows and a new roof in the spring, but it didn't entice any buyers as the "FOR SALE" sign is still there. 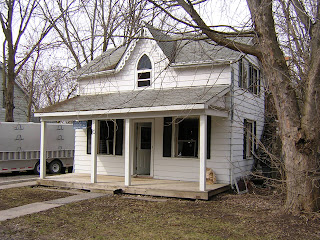 Right opposite me, this house was sold in July 2005, and has been under extensive renovation ever since... nobody living in the main part of the house right now, a young couple rents the basement apartment. Last week it got a new roof and a new chimney. 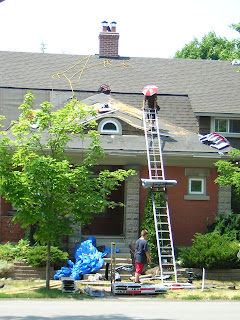 And this afternoon, I heard the BUZZ of a chain saw. My neighbours to the side were cutting down a huge tree. Enlarge at the Red Arrow. 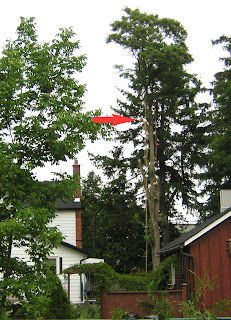 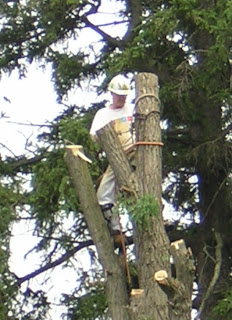 Most of the neighbourhood houses on this street are more than 40 years old, as this is one of the originally settled parts of town, but next door to me is a 4 year old house, with new owners who moved in a couple of months ago. They already are making changes, building extra bedrooms in the basement.
And at the end of the street, there is a huge extension going onto a big brick house, probably doubling the living space.
Constant changes happening round here, that's for sure.
Posted by Shammickite at 17:05