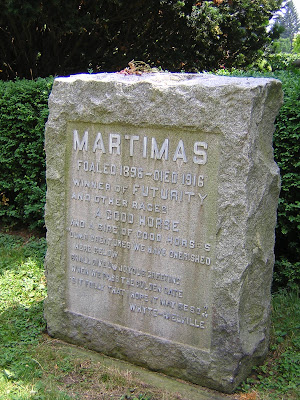 While strolling through the Royal Botanical Gardens (see previous post) we came across the grave marking the final resting place of Martimas, a thoroughbred racehorse owned by William Hendrie, the original landowner.
Someone had placed a faded flower on the stone.
Having never seen such an elaborate grave for a horse before, I wanted to know more.
The Canadian Horseracing Hall of Fame web site says:
On the morning of August 23, 1898, a groom was leading a young colt about the scarcely-built environs of Brooklyn, N.Y., looking for Sheepshead Bay race course. That afternoon the Futurity Stakes, a race for the best two-year-olds in America, would be run at the Coney Island Jockey Club track.
It had been a long day for Martimas, who was owned by William Hendrie of Hamilton, Ontario. Following an overnight trip from Saratoga down the Hudson River to Manhattan, the colt was shipped by ferry to the docks in Brooklyn, about six miles from the track. The groom, after being misled many times and walking in circles for hours until he and Martimas were on the verge of exhaustion, arrived at the track 45 minutes before post time.
With 23 horses at the post, many on their worst behaviour, it took the starter 1 1/2 hours to get the field away. Martimas broke on top and was never headed in this great classic that is now run at Belmont.
The money Hendrie earned in winning the rich Futurity was given to build the Martimas Wing at Hamilton General Hospital. A multiple stakes winner on U.S. tracks, Martimas also won the Toronto Cup at Woodbine and the Canadian Derby at Fort Erie for trainer Ed Whyte. Martimas sired King's Plate winners Kelvin and Shimonese.
When Martimas died in 1916 he was buried at the Hendrie's Valley Farm in Aldershot near Hamilton. In 1931 the farm was donated to the citizens of Hamilton and is now the Royal Botanical Gardens.
*****
In case you can't enlarge the photo, the inscription reads:
MARTIMAS
Foaled 1896 - Died 1916
Winner of FUTURITY and other races
A GOOD HORSE
and a sire of good horses
"Dumb creatures we have cherished here below
Shall give us joyous greeting
When we pass the golden gate
Is it folly that I hope it may be so?"
Whyte-Melville
Posted by Shammickite at 21:36